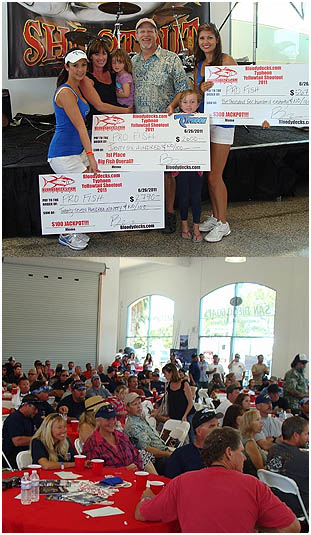 Tournament organizers for the Typhoon/Bloodydecks 2011 Yellowtail Shootout decided to take the event back to its roots for the 2011 event, dropping entry fees to the same amount as their first-ever tournament and bringing it back to Mission Bay in San Diego.

The changes were well received as 52 teams and a total of 183 anglers signed up to fish in the tournament. Each team was eager to hit the water, hoping to bring in a trophy-size yellowtail to take their slice of the nearly $20,000 offered up in cash and prizes.

While the fishing wasn’t red hot, the team on Profish made the most of it, bringing in a 23.3-pound yellowtail to take home first place honors, presented by Typhoon Polarized Optics. The team on Profish, including John Leonard, Phil Faubert, Steve Krogh and Rich Duby, also won the optional $300 jackpot worth $5,670 and the $100 jackpot worth $2,790, bringing the team’s grand total to $11,260 in cash and $2,800 in prizes. But, their winning fish just barely squeaked by to take the top spot.

Two fish weighed in at 23.2 pounds, just one-tenth of a pound lighter than the overall winner. As these two fish were tied, the two teams split the second and third place prizes. Their names were nearly the same as well! Jeff Tiffany, Jim Jamason and Nathen Chisholm on Team Bite Me tied with Team Bite This, made up of Fil Hinojosa and Rigo Barreto. Each team received $910 in cash and another $900 in prizes for their fish. Rounding out the top eight teams were the following:

As you can see, the winning fish were all extremely close in size — just two pounds separated the eighth place finisher from first place — making for a very tight competition. But no one went home empty handed.

The weekend started with the captain’s meeting and teams showed up at San Diego Boats at Dana Landing to pick-up their packet, t-shirts, camera and rules. As soon as the teams got their packets, they headed out fairly quickly. Some slept in the parking lot, some took off to get on the water and wait till lines in, while others drove home, hoping to get some sleep. Fishing was tough, but a couple of yellows were caught the day before, and the boats scattered out to target different “secret spots” with their game plans in place.

Back at San Diego Boats, Rob Sanford had his crew clear out the building so it could be used for the award’s banquet. It was the perfect location. As the tournament crew setup and organized for the banquet, everyone waited for boats to come to the weigh station. The first boat that showed up had a white sea bass to weigh and they are in the Marlin Club tournament. A few other fish that weren’t yellows were also weighed. Then it finally happened, a boat in the Yellowtail Shootout had a fish to weigh in. Annie got their tournament camera, the fish was handed over to Clay and Cory to weigh, the weight was recorded, the captain signed the weight receipt and the team posed for the first official tournament pic of the year. The next boat to weigh in had two yellows, and things started to roll.

It didn’t take long before the tournament committee started wondering about last year’s winners. We hadn’t heard or seen Team Rickdiculous come in. They are usually a contender. Just as we’re discussing it Rick’s 40-foot Riviera slowly came within sight. Unfortunately, no yellows but they did catch a 5-plus-pound calico that was quickly weighed and released to live another day.

Dana Landing Tackleshop’s $1,500 “Dash For Cash” prize for the first yellowtail brought back to the dock was not claimed this year. Instead, Dana Landing opted to give all seven teams that participated in the Dash For Cash $200 each.

The weigh station officially closed at 6 p.m. and the tournament committee headed home to get ready for the award’s banquet the following day.

The volunteer crew arrived and began assisting the vendors to setup their booths and coordinated final tasks. Typhoon, the title sponsor, put out a great selection of sunglasses for sale with a major BD discount! A bunch of folks took part in the knot-tying contest sponsored by Berkley. Phil’s BBQ started cooking up some delicious BBQ in the parking lot. People were hanging around inhaling the smoke as an aphrodisiac in anticipation. Dinner consisted of riblets and chicken along with macaroni salad, coleslaw and baked beans!

The crowd was treated to a bunch of raffle items before moving on to the big winners in the event. The top eight teams all received prizes, and San Diego Boats stepped up to the microphone and announced that they were giving EVERY team in the tournament a $100 gift certificate for their next service bill. Now everyone had a nice prize to take home!

All in all, the 2011 Typhoon/Bloodydecks Yellowtail Shootout will go down as another successful tournament. We all had a great time fishing and hanging out with our community.

For more photos and video of the action, check out this forum post.

Maggie Beauchamp
Maggie Beauchamp has been an integral part of the BD team for years, helping out with event planning and tournaments. You can always count on Maggie h...