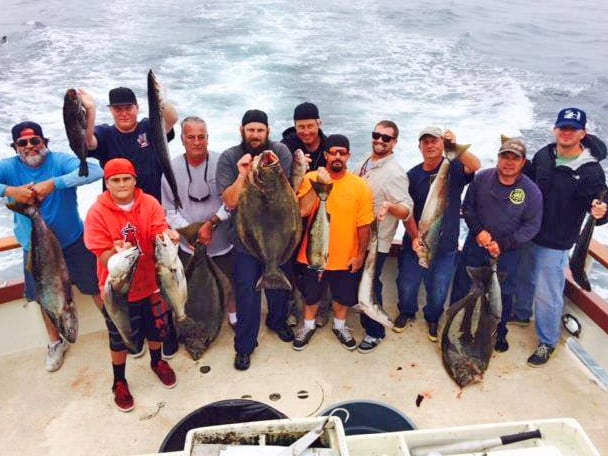 Here it is, the first full week of August and much like the last full week of July and the string of weeks leading up to that week, the tuna bite continues. But what about everything else? Where are the sand bass, the barracuda, the calicos? Well, that’s tough to say and with the offshore fishing as good as it’s been, it’s easy enough to kind of forget about the fish that aren’t biting.

I was reminded of these other species when I received an email from a reader this week asking, “why there are such big numbers of sculpin being caught these days?” While the question is simple, the answer is difficult to pinpoint. Please note that this is only my opinion and I welcome anyone with a different one to contact me. I will be happy to publish a different view if mine proves to be incorrect.

First off, the sculpin the reader referred to where those being reported by 1/2 and ¾-day boats from the Santa Monica Bay to Newport Beach and they can be grouped with any rockfish being targeted outside of the classic winter rockfish season.

In the old days, they’d refer to “the three Bs” as the mainstay of the local sport boat fleet. Those Bs were, bass, barracuda and bonito. These days it seems like the Bs are bottom fish, bottom fish and bottom fish. So, the actual question should be, “Why have boats stopped targeting gamefish in these areas?”

I don’t think there was any conscious decision made by sport boat captains to one day just start fishing for rockfish instead of gamefish; it actually was years in the making.

The whole thing started six or seven years ago at the beginning of the cold water cycle (that ended this year). The surface fishing was pretty tough those first couple years and when the local boats had big weekend loads during the summer, they’d try to catch some barracuda or sand bass in the morning and then head out to “put something in the bags” later on. That something happened to be sculpin and rockfish. In the beginning this seemed like a good idea; as it put some fillets in the customer’s bags and some side money in the crew’s pockets. The problem was that eventually boats spent less and less time looking for the gamefish before heading out to fish sculpin or rockfish. Heck the fishing was tough and you can’t blame the crews for trying to make a living.

This eventually resulted in the passengers that were interested in fishing for gamefish to move on to other boats and landings. At the same time, these boats started to attract people who wanted to take home a big bag of rockfish and sculpin fillets. So now, the crew would get passenger complaints if they fished for anything but sculpin and rockfish.

The last year has seen a trend away from this mentality, and a lot of the boats are trying to get out of bottom fishing mode, but it’s not going to change overnight. I spoke with a friend the other day that reported excellent bass fishing on a half-day trip. In fact it was so good that he wanted to go again the next day. But news of the bite got out and the next morning there were 40 people waiting to get on the boat. So what did they do? Went sculpin fishing because there were too many people on the boat to fish bass properly. Anyway, if you’re tired of fishing rockfish and sculpin during the summer, vote with your wallet by patronizing boats that target gamefish. Now that I’ve got that off my chest, lets take a look at where the gamefish are biting along the coast. Starting in Ventura, the Channel Islands continue to kick out some good scores on seabass and halibut for the overnight boats, while the 3/4-day boats are catching mostly calicos and big rockfish. Boats fishing Anacapa and the east end of Santa Cruz have also been getting the occasional yellowtail. If I were a private boater looking to catch some yellows, I’d slow troll mackerel or Rapalas along the edge of the kelp at Yellow Banks as that area usually holds fish at this time of year. Catalina has been the hot zone for yellowtail this week. Both sport boats and private boats have been getting good scores on fish along the front side of the island. If you’re looking to fish there on a party boat, the 3/4-day trips from San Pedro to Newport Landing have been fishing the island. Most fish are coming on anchovies (or sardines if available) but there have been plenty of fish caught on the surface iron as well. Private boaters should avoid the crowded areas and look for fish along the front or back of the island. I spoke to a commercial squid fishermen who was at the island all week and he reported seeing fish all over the backside of the island. There are still some big fish in the mix, but the overwhelming majority of these yellows are under ten pounds. The offshore bite is still happening up and down the coast, with the best fishing coming from the San Diego area. In the last couple days there have been lots of tuna caught well within sight of land down there. So don’t overshoot the fish on your way to your intended fishing zone.

There are still a lot of tuna off the Orange County coast, but the further north you go, the harder they are to catch. This is partially due to the fish being on micro bait in this area but they weren’t biting all that well before they found the micro bait. Despite the tough bite, quite a few guys have been getting good scores. BD member Ryan was one of the guys that recently loaded up and he these tips to share.

GET SMALL BAIT – These fish could have eaten the mackerels but they just didn’t want to. I can almost guarantee that we would have caught more fish if we had a full tank of anchovies to chum. The “big bait –> big fish” logic just isn’t working right now.

LOOK AROUND – I couldn’t believe that a boat had yellowfin flying out of the water behind it and didn’t stop. Lots of reports are saying that the fish won’t touch troll lines and are only taking bait, so you can’t rely on clickers to tell you where the fish are. In hindsight, we probably should have packed up the trolling gear and ran around looking for jumpers and sonar marks. Finally, the Coronado Islands are producing excellent yellowtail fishing for the few boats that are venturing down that way. So if you were looking for a change of scenery, the islands would be a good place to go this weekend. There are big schools of fish scattered around the island chain, so I’d look for birds and bait schools. Once you find the fish, you’ll want to keep moving to avoid getting destroyed by seals. Trolling Rapalas or slow trolling macs is a great way to stick and move without getting too many seals on you. If the fish are up, run and gun surface iron fishing should make for a fun day on the water.