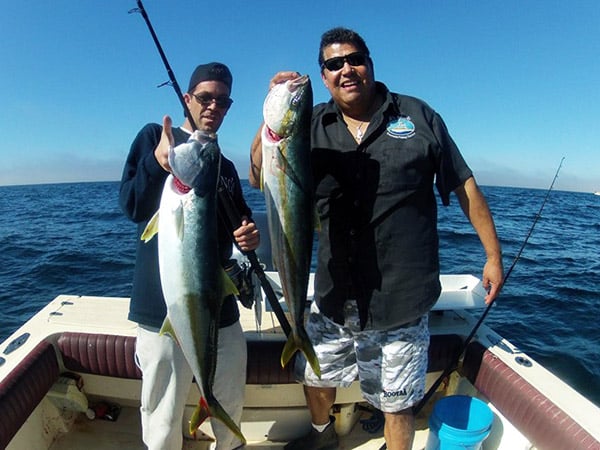 The big news over the weekend was the Coronado Islands yellowtail bite that started on Thursday, peaked on Sunday and had all but disappeared by Monday. There are lots of people making guesses as to why the fish stopped biting. Water temps dropped, conditions changed, maybe it was the cool and cloudy weather

I don’t really know what happened to cause the fish bite like crazy one day and disappear the next; but I bet it had something to do with the full moon we had over the weekend.

The full moon means different things to different people and depending on whom you talk to it can be the best or worst thing that can happen during any given month.

I don’t pay all that much attention to the moon because I’m going to fish regardless of the cycle. But I did learn something a long time ago while working as a deckhand for George Xenios on the Victory. George taught me that the full moon means that things are going to change. Fish that weren’t biting will start to bite, fish that were biting will stop or move somewhere else and currents and tides will change the conditions for the better or worse. This may not make the guys who blanked on their trips Monday feel any better about not catching anything, but it’s something to keep in the back of your mind the next time you’re planning a trip around the full moon. After Sunday’s big scores, I briefly considered hopping on the Chubasco II on Monday, but the full moon and the big bite the day before gave me pause. So I decided to stay home on Monday and planned to go later in the week if the fish bit again. Well, the fish didn’t bite so I saved myself a boat ride. The full moon doesn’t always kill bites, especially when the season is in full swing, but it can be tough on temperamental early season bites.

The bite at the islands should get back on track sometime soon and when it does it will probably be steadier than it was during the last lunar cycle. If you’re planning a trip to the islands you’ll want to bring a surface iron rod along with your yo-yo gear as the fish have been eating the jig pretty well. Logan, who is pictured with the fish, at one point told his dad that he believed they were going to need more line. All I can say is that you’ve got kids, take them fishing. In other news, the fishing continues to suck from the Santa Monica Bay down to Newport Beach but there are a few fish to be caught if you’re willing to put in your time. My friends Randy and Julia took a day off from surf fishing to target calicos along Palos Verdes with Captain Benny Florentino of Coastal Charters. They reported good conditions but tough fishing for calicos on Sunday (probably partially due to the full moon) and ended up with a handful of bass. The bass fishing in Long Beach harbor continues to be tough but the halibut have started to bite for boats fishing the outer harbor areas. Both Mission and San Diego Bays are kicking out some good spotties. Matt and I fished Mission Bay on Sunday morning and ended up with a dozen bass for a mornings fishing. Fish were tough to locate but once we’d find a batch, we’d get multiple bites on the 7″ MC Split Tail Slug and the 1 1/2 oz Bladerunner Tackle spinnerbait. The bite should continue to improve in both these bays over the next couple of months. Several San Diego sportboats are offering overnight and 1 1/2 day trips this weekend. While these trips are targeting rockfish there is always a chance of running into some yellowtail at Colonett or the Finger Banks at this time of year. With reports of yellowtail being caught at Todos Santos in Ensenada and at San Martin Island, there is no reason that boats shouldn’t be encountering schools along the coast between those areas.