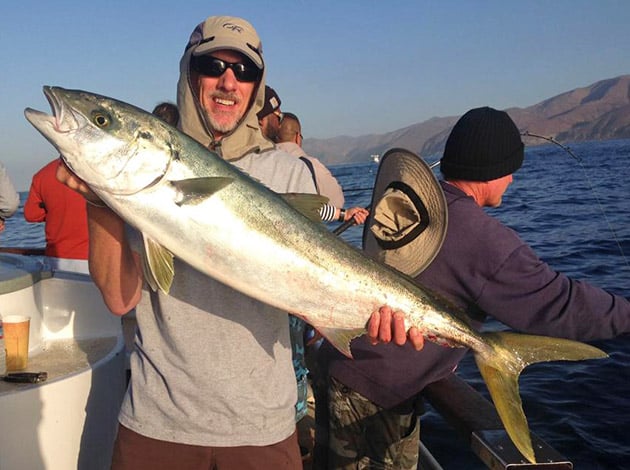 The word “unprecedented” has been used to death this year. It’s been used to describe boats scoring wahoo out of Dana Point, blue marlin biting in U.S. waters and long range boats fishing Catalina Island; and as much as I hate to do it, I’ve got to drag it out once again to describe this week’s coastal yellowtail bite.

What’s so unprecedented about the yellowtail bite?

Well, for starters most of the fish are in the 20 to 30-pound range, which is definitely not normal for a warm-water year. Even less normal is the fact that the fish are being caught around structure in extremely deep water, from 150 to 250-feet. The least normal thing of all is that this grade of fish is biting from below the Mexican Border to the Ventura County line? Sport boat anglers interested in taking advantage of this bite have several options depending on where you want to fish. Boats out of Ventura landings have been fishing the yellows on the beach south of the harbor. These fish are all being caught off of squid beds in the area, so if you’re planning a trip, expect to fish dropper loop and squid. You can get by with fishing 25-30-pound line up there because there is no real structure to worry about. I’d personally fish at least 40-pound test to get some extra pulling power in case there are seals in the area.

The Santa Monica Bay is kicking out some big yellows too. Earlier this week the New Del Mar had 30 yellows on their 1/2 day trip out of Marina Del Rey Sportfishing and the Redondo boats have been getting a handful as well. Of all the areas that have been biting this is the least consistent, but that may change, so keep an eye on the counts. The 150 area kicked out some big scores on Wednesday for the Southern Cal and Victory out of Pierpoint Landing. Almost all of these fish are coming on sardines or mackerel. Depending on the day, the fish might be biting on the surface or down on the bottom, so make sure and bring some torpedo sinkers to fish the dropper loop just in case. There have also been fish caught on yo-yo jigs when they are holding deep. Like with the fish up north, there isn’t a lot of structure to worry about, so you can get by with the same gear. Catalina Island is also producing excellent yellowtail fishing for 3/4-day boats out of 22nd Street Landing and Davey’s Locker. These trips have been concentrating on the backside of the island and putting together good scores of mixed grade fish. Most of these fish are coming on sardines, but they’re also biting the jig, so I’d definitely bring a surface iron rod along if you were heading across. The next area of big fish is down below Dana Point. This area is being fished by the 1/2 and ¾-day boats out of Dana Point Sportfishing and Oceanside Sportfishing. All of these fish are coming out of deep water so you’ll want to bring the right gear to fish a dropper loop in up to 250 feet of water. If I were heading down that way, I’d fish a seven or eight foot rod with 65-pound spectra and a 40-pound fluorocarbon leader.

The last area that’s biting along the coast is down in the San Diego area. The half day boats from Mission Bay and San Diego Bay are ranging anywhere from La Jolla down to Imperial Beach depending on the day. This area has been hit and miss as well and even on the days that it hits, the yellows can be on the small side but get it on the right day and it’s game on for big fish. The San Diego 3/4-day boats have been fishing the Coronados and the Rockpile lately and have been getting good scores on a mixed grade of fish with a few big ones in the mix. Private boaters looking to catch some yellowtail can check out any of the areas that I mentioned in the sport boat report, but you can expect those zones to be crowded this weekend. So instead of just putting your boat on tracks to where they bit yesterday, let’s take a look at how you can find some fish tomorrow. So where should a private boater go and look for biting fish this weekend? Well, let’s use the facts we have to make some educated guesses. Number one, the fish are scattered up and down the coast so there are no zones to avoid. Second, the fish are mostly biting around deeper water structure spots. Finally, from what I’ve seen and heard, these fish are chasing bait schools in that deep water.

That leaves a lot of potential areas to prospect this weekend. So why not head out of your local launch ramp and start looking for bait schools around structure spots in water deeper than 100 feet? Trust me that it will be a lot more rewarding to find your own little ripper bite than to sit around waiting your turn and watching other boats get bit.