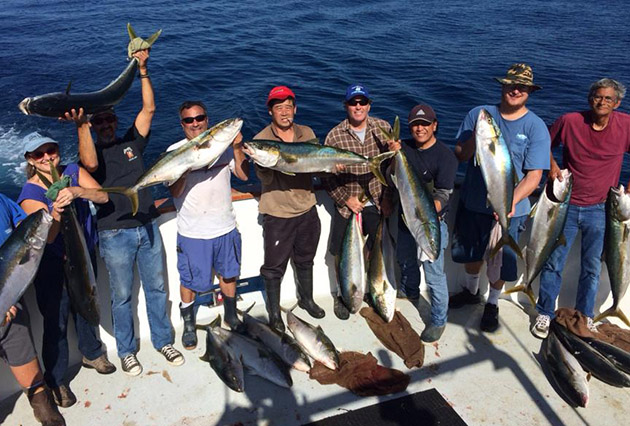 The good news this week is that the unprecedented yellowtail fishing we’ve had along the coast continued, with boats from the Channel Islands down to the Mexican getting in on the bite.

The bad news is that there’s a storm system bearing down on us that might put a damper on the fishing.

The storm is forecast to arrive on Friday night, with minimal amounts of rain falling along the southern coast, but the rain has plenty of wind behind it and it’s forecast to blow 20-plus all day Saturday. It’s anyone’s guess as to the long-term effects of this storm on the fishing, but in the short term it’s going to make for tough fishing conditions on Saturday (and probably Sunday).

Rather than focus on the wet and windy weekend, let’s take a look at what’s been biting and will hopefully continue to bite after the storm. Starting in San Diego, the Coronado Islands continue to kick out good scores for the 3/4-day boats. Last week, Captain Ryan Bostian on the San Diego reported limits of yellows with 80% of the fish being in the 10-pound range and the rest running 20 to 30-pounds. That changed this week as he caught 64 fish for his 28 passengers and reported, “The small and medium grade fish have been missing in action the last few days. All of our yellowtail today were 20-35-pounds.”

There are still yellows to be caught along the coast in San Diego but the bite has been hit and mostly miss this week. Boats fishing the area in recent days have reported very slow fishing and most have resorted to fishing rockfish. I wouldn’t completely rule this area out as there are a lot of fish being caught in the surrounding areas and there is no reason the yellows won’t move into the zone again. Speaking of a lot of yellowtail, the waters off San Onofre are producing the best yellowtail fishing on our coast. The Sum Fun out of Dana Wharf managed 70 of the big yellows on Wednesday, with fish ranging from 20 to 35-pounds. All of these fish are coming out of deep water and for the most part are being caught on live bait fished on a dropper loop. There are also a few fish being caught on the yo-yo iron, so if you were heading down there I’d bring along a mint and white Tady 4/0 heavy. This is a good size because it will get down quickly in the deep water and you can never go wrong with mint and white when fishing yellowtail.

Boats from Oceanside to Newport are all running to this same zone to fish, but I’d suggest going out of Dana Point as they are the closest landing to the zone. The yellowtail bite on the Horseshoe Kelp dried up last week. I’m not sure if the fish left the area or just stopped biting, but chances are that at least some of these bigger fish moved up to Palos Verdes and are now biting off Rocky Point. There have been smaller yellows biting around Rocky Point for several months now, but this week is the first time the bigger ones have showed up in force. Boats from Marina Del Rey down to Long Beach have been fishing this area but the biggest score came on the New Del Mar who had 64 fish on Tuesday’s half-day trip. Almost all of these fish are being caught on mackerel so if you’re planning a trip on your own boat you’re going to want to make bait before heading out. Despite the excellent fishing, boats are having trouble getting off the dock during the week due to a lack of passengers. So if you want to get in on this bite, I’d suggest avoiding the crowded boats out of Redondo and jump on a ¾-day trip out of Long Beach. Captain Aaron Graham on the Native Sun out of 22nd Street Landing has been getting out with light loads and catching fish every trip. There is a mixed grade of yellowtail biting at the Channel Islands for boats fishing out of Ventura Landings. Captain Shawn Steward of the Aloha Spirit scored 85 yellows on Wednesday’s trip and these fish are biting both bait and iron. This area is going to be hit pretty hard by Saturday’s wind so it may be a few days before the islands are fishable again. We’ll just have to wait with crossed fingers and hope that the fishing picks up right were it left off when the weather comes down.