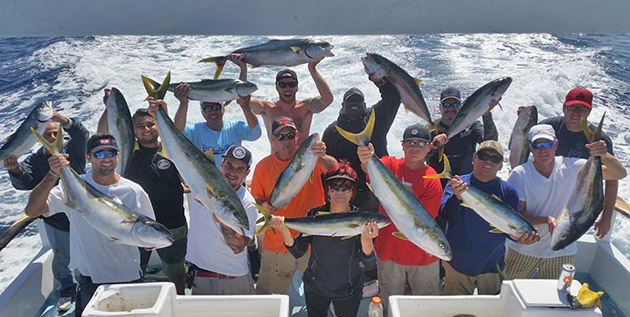 This is going to be an interesting weekend. We’ve got a new moon on Saturday and the wind that’s been blowing for the last couple weeks is scheduled to calm down. With yellows biting at all of the islands and along the coast in recent days, I’d say that if you’ve been thinking about getting out fishing, this is absolutely the weekend to do it.

With so many options  available to anglers right now, I’m going to break this week’s report down into two sections starting with sport boat fishing options.

San Clemente Island is hands down the best game in town. Boats from San Diego to LA Harbor are currently running overnight trips to the island and everyone has been catching fish.

As usual, the Thunderbird out of Davey’s Locker was one of the high liners this week. On Wednesday’s trip they had 138 yellowtail for 19 passengers. These are still a mixed grade of fish but there are plenty of big ones in the mix with fish to 35-pounds reported this week. The fish are being caught on both bait and jigs, so make sure and bring a live bait rod, a yo-yo rod and a surface iron rod on your trip. There are going to be a lot of boats heading to the island this weekend so jump on your favorite and go catch some fish! The San Diego 3/4-day fleet is still catching fish at the Coronado Islands, but the bite isn’t wide open. Most trips are averaging between 20 and 60 fish per day, but those counts can and probably will improve going into the weekend. The Mission Belle had 31 good grade fish for their 31 passengers on Wednesday’s trip out of Point Loma Sportfishing. In the LA and Orange County area, a 3/4-day trip to Catalina is the best option if you’re looking to catch yellowtail and don’t want to take an overnight trip. The Native Sun out of 22nd Street Landing had 21 yellowtail for their 17 passengers on Wednesday and reported loosing almost as many fish as well. Like at San Clemente Island, the fish are being caught on both live bait and jigs, so make sure and cover all of your bases gear-wise. While you’re at it, I’d bring a bass rod, as there’s been a good calico bite at the island as well.

Before I get into options for private boaters, I’d like to share a story about what not to do if you’re a private boater. On Sunday morning I went out to look for yellows out of Long Beach. I was buddy boating with my friend Captain Jimmy Decker and we were running different depth lines looking for feeding activity. After an hour of looking I got a call from Jimmy that he’d found the fish up with no one around. I headed over to him and as I pulled up so did another boat and then another. No big deal, the area was more than big enough for four boats to fish. But as I cruised up on the first spot, one of those boats blasted right through it on plane.

After a couple unsuccessful attempts to get on fish with this other boat racing around, I got frustrated and drove away.

A short while later, another spot came up outside of me and the second I turned on it and sped up slightly, this other boat floored it and headed right for me and did the same thing. I ended up not catching any yellowtail that morning, but luckily Jimmy was able to get a couple for his passengers. I’m not sure what the guys that were racing around all morning caught but I assume they didn’t catch any either. In hindsight, the guy obviously had no idea what he was doing and I should have pulled alongside the offending boat and explained the program to him instead of getting frustrated and leaving.

If you’re unsure of how to fish bird schools, try following these simple steps. Do not race up on the first spot of yellows that pops up, the sound of your boat will probably just send them back down. Instead just head towards them at a reasonable pace and watch what they are doing. Pay close attention to how long they are staying up and the direction they are moving. Try to run parallel to them until you are in front of the school (stay at least 50-yards off their side) and then turn the wheel, pull the boat out of gear and slide in front of them. Once they are in casting range let the jigs rip. If you’re fishing around other boats, you’ll need to fight the urge to race in on someone else’s bird school. I know that it’s frustrating to watch other guys catch fish when you’re not getting bit, but by racing in all you’re going to do is ensure that no one catches anything.

Now that I’ve got that out of the way, there are still plenty of yellows being caught along the coast by private boaters. If I were heading out of Long Beach I would start looking in 80-feet of water and stop looking in 360-feet of water. On the same note I would look from the extreme west end of the Horseshoe Kelp all the way to the east end. These fish are scattered everywhere, so just look for birds that are acting like they’re on yellows and throw the jigs at them. Oh and try to avoid other boats while you’re looking. Private boaters are also scoring yellows at Catalina Island but are having to compete with the sport boats to do it. If I were fishing the island, I’d try to be at Farnsworth Bank at dawn and fishing it until the 3/4-day boats show up. Once they get to the island I’d start looking for fish wherever they’re not fishing. If you’re fishing along the backside of the island you can locate fish by slow trolling a mackerel. My first thought would be trolling that mackerel in 90 to 120-feet of water.

Lots of private boaters will be running down to the Coronado Islands this weekend as well. If you’re heading down that way, I’d recommend avoiding the fleet and looking for conditions in un-crowded areas. According to www.fishdope.com there are some patches of off color water around the islands, so the first thing I’d do is look for clean water. Follow that up with some bait and birds and you should find some biting yellows.