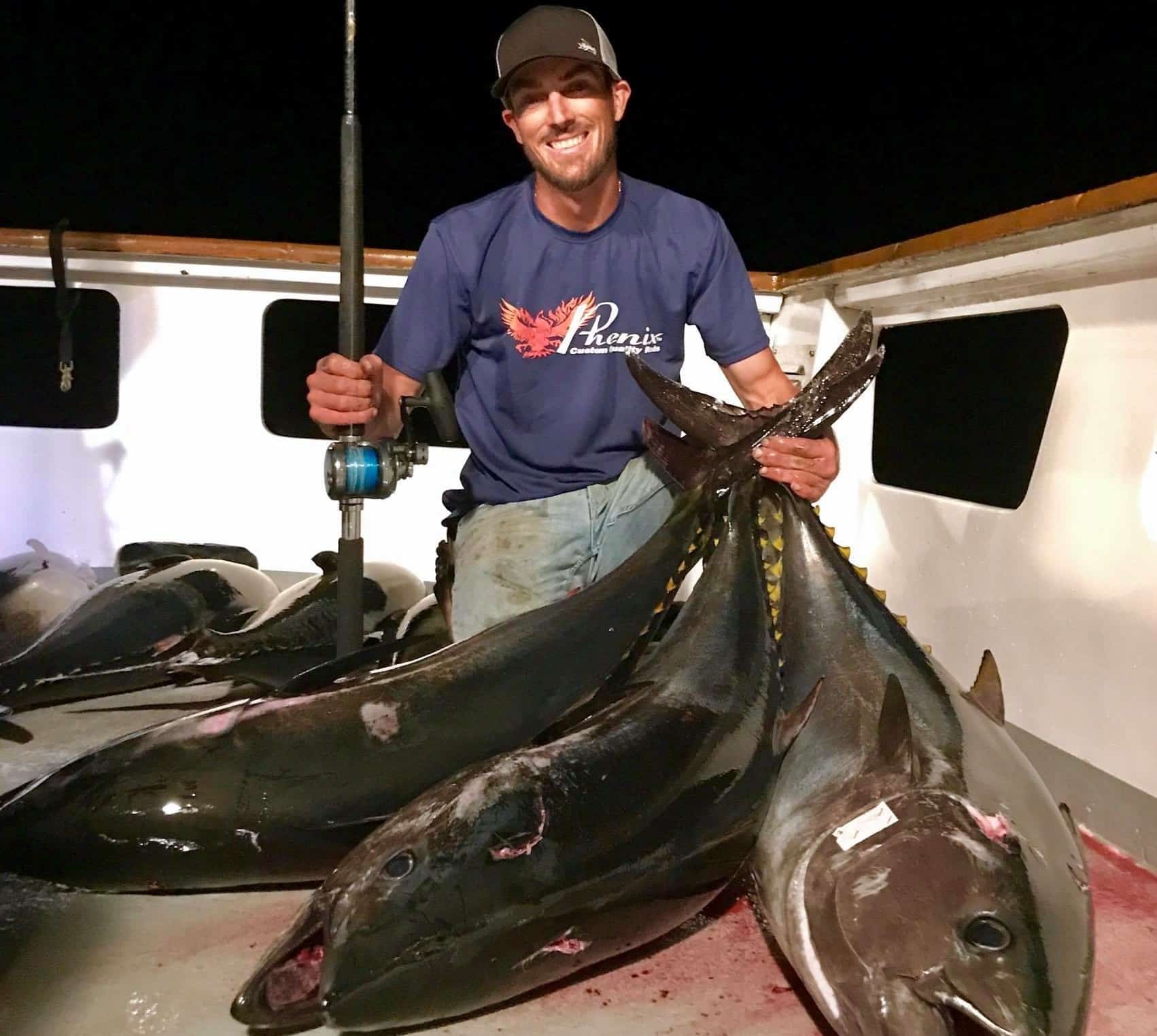 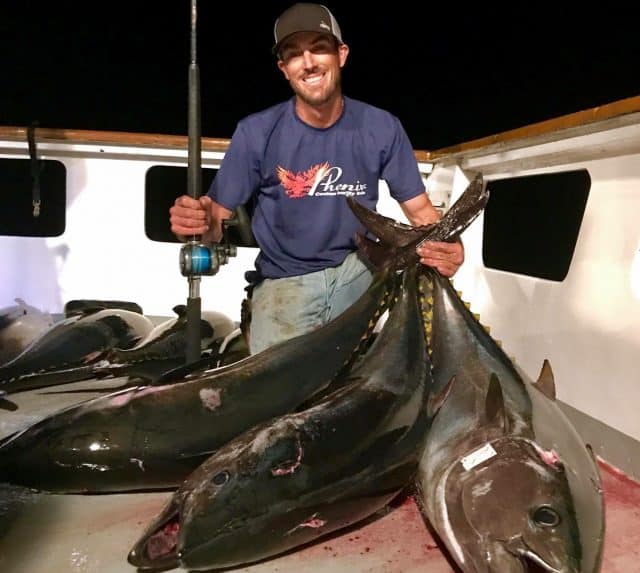 The other day I received a message from a reader asking how long I thought the offshore action might last. My response? Good question! We’re coming into the last weekend in October, it’s 100-degrees in most of Southern California and the extended forecast is calling for at least a couple weeks of stable weather. Add in the November full moon rising a week from this Saturday, and things are looking pretty good. There’s enough bait around to keep the fish interested, so if I had to guess, I’d say the offshore action is going to keep rolling along until we get our first shot of strong northwest wind.

Rather than guessing at when it will end, I suggest taking advantage of it while its biting. 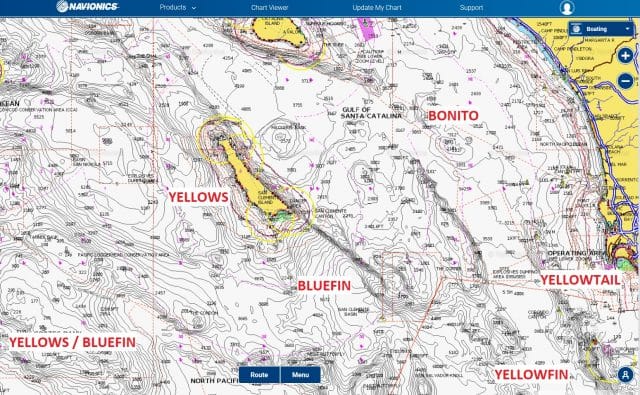 The big bluefin haven’t been getting a lot of coverage this week but they are still biting. The Aztec out of Seaforth Landing is on the fish again this week and the photo at the top shows deckhand Justin, who took a day off to go fishing, with three of the four bluefin he caught on Tuesday’s trip. Not pictured is his 150-pound fish that can be seen and read about in his report here. The Aztec is back out there today (Thursday) and already has two fish on the boat, one of which is over 200. The boat has trips scheduled through next week and if you’ve been thinking about going, I’d jump on one of these trips as the crew has these big bluefin dialed.

There are also some big bluefin out at Tanner Bank. The Thunderbird out of Davey’s Locker fished there on Tuesday and reported 27 big yellows and one 150-pound bluefin. According to reports there is no shortage of yellows and tuna on the bank but they aren’t biting all that well. Both Tanner and Cortes Banks can be very fickle when it comes to conditions. One day the stars line up and its wide open and the next you can’t buy a bite. If you wait until a big score comes from out there, you probably missed it, so you’re just going to need to roll the dice if you want to fish there. 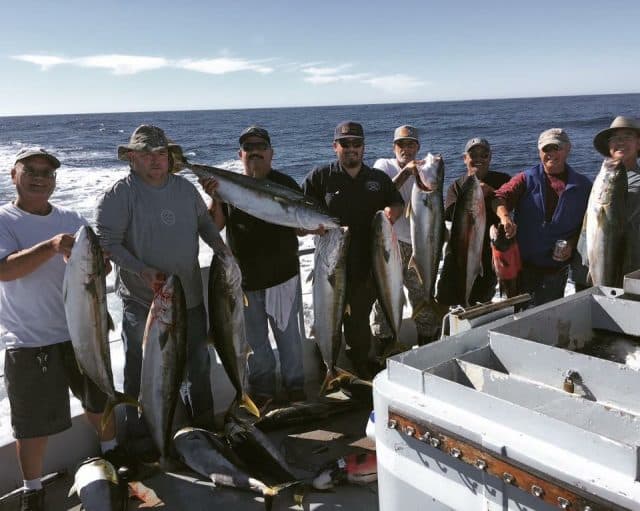 The yellowtail are biting to some extent at most islands. San Clemente and Santa Barbara have been the most consistent in the last week. With squid showing up at the receivers, I know that Nacho had some earlier this week, the yellowtail scores will likely increase. The squid is pretty far from any of the islands that are biting so I wouldn’t expect to be able to buy bait from a light boat just yet.

New this week is the influx of big bonito along the coast. These fish are scattered from below Dana Point all the way up to Long Beach and are being caught in open water close to the coast. There have been some other fish mixed in with the schools including yellowtail, skipjack and even a bluefin tuna caught on a half day trip aboard the Monte Carlo out of 22nd Street Landing. Private boaters looking to get in on this action should look for bird schools and bait while trolling feathers. Once you find a school the fish will bite bait and artificial lures. 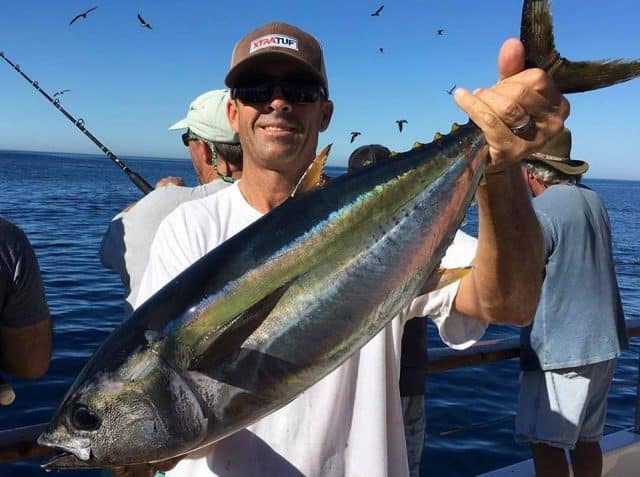 Finally, there are some mixed yellowtail and bonito biting on the beach in San Diego. The half day boats have been targeting these fish and have been getting the occasional good score on yellows to go along with consistent bonito fishing. The bluefin and yellowtail bite at the Coronado Islands has dried up a bit this week but the yellowfin are still biting for boats offshore. The 3/4-day boats are still getting shots but the local banks are hit and miss. High boat of the week was the San Diego out of Seaforth Landing who had 250 fish for 55 anglers on Wednesday. The overnight and 1 1/2-day trips are running farther south and finding more consistent action on the same grade of fish.