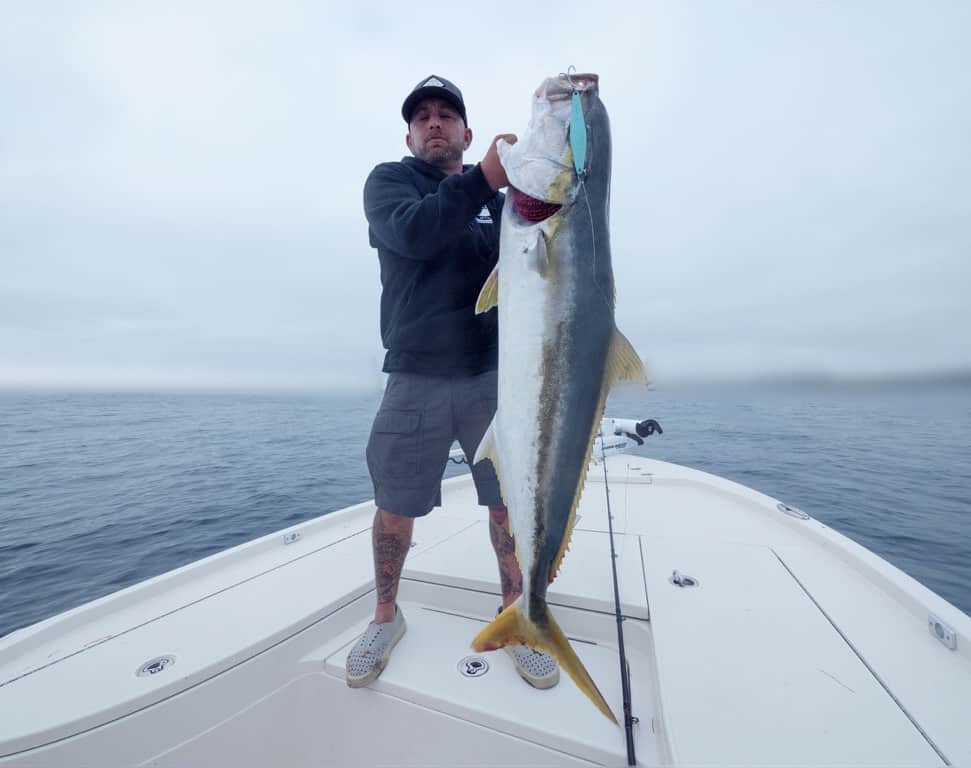 Well, it looks like I fell flat on my face last week when I predicted that the Channel Island yellowtail bite would improve going into the full moon. In fact, it seems like those fish disappeared at almost the exact moment I hit Ctrl+S after finishing the article. Oh well, I guess that’s the way things go. The good news is that the yellows did bite in several other locations over the weekend, but with the heavy winds we’ve experienced the last few days we’re going to have to wait and see if they’ll bite again this weekend. Over the weekend, Santa Barbara Island ended up being the northern yellowtail hot spot. I happened to be at the island on Saturday shooting photos for an article I’m working on with Captain Benny Florentino of Coastal Charters. While the article was intended to be about bass fishing we spent a couple hours fishing yellows. There were lots of fish scattered around multiple spots at the island and we managed 4 fish on the surface iron. The fish averaged 8 to 13-pounds. Santa Barbara was hit pretty hard by the wind this week so it’s anyone’s guess as to what that will do to the fishing.

Several of my friends made the run to San Clemente Island on Sunday and manage a few big yellows while yo-yo fishing in deep water.

Chris Lilis reported catching one over 40-pounds and said that Justin Hugron of Kicker Jigs caught one that was pushing 50. They also reported good calico fishing at the island which bodes well for next weekend’s SWBA California Offshore Challenge. There are still a couple spots open for this two day calico bass event, so visit the SWBA website if you’re interested in fishing it. The yellowtail also bit at Catalina Island over the weekend, but were the smaller grade stuff for the most part. I spoke with Captain Jimmy Decker who fished there with his wife Tracy. They spent part of the morning looking for bigger yellows and managed to find a school but the fish were keyed in on red crabs. Decker managed to hook one of the fish on the surface iron but lost it. Later in the day Decker fished tight to the island for decent bass fishing and a handful of small yellows on the hardbait. On Sunday the yellowtail bit full speed for the San Diego out of Seaforth Landing. The boat made the long run south of the Rockpile and the anglers were rewarded with limits of yellowtail. The fish were feeding on the surface and actively biting the surface iron and flylined baits. This area got some wind during the week too but I’d imagine that it’s more resilient than the stuff up north, so there should be good fishing again this weekend. Finally, while it’s not as exciting as yellowtail fishing, the rockfish and calicos bit well for boats fishing the Channel Islands over the weekend. Captain Larry Heron of Calico Hunter Charters fished Santa Cruz Island on Saturday and reported excellent weather and good bass fishing for his clients. The Aloha Spirit fished rockfish over the weekend and managed lots of quality fish for their passengers. The weather is forecast to be good up there this weekend so if you’re looking to catch some rockfish with a chance of yellowtail the Channel Islands would be a good bet.