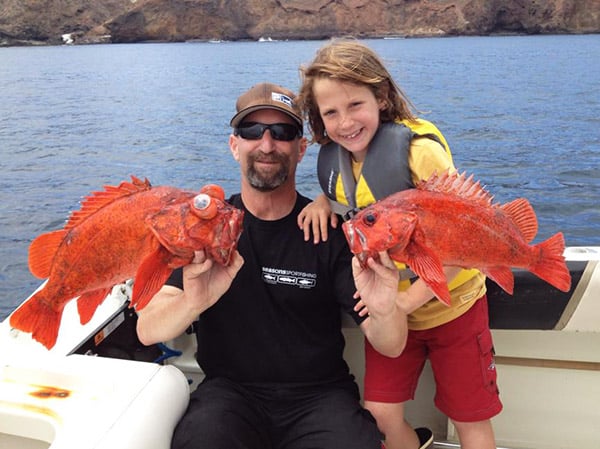 More wind over the weekend kept most boats from venturing offshore in search of tuna, but those that made it out managed to catch a few bluefin to go along with decent yellowtail fishing on kelp paddies. The good news is that the bite is picking back up with the Shogun finding a school of willing bluefin on Tuesday that resulted in daily limits. Another boat that got into the bluefin this week was the Pacific Voyager who scored fish to 111 pounds on their 2-day trip.

With the weather coming down and fishable conditions forecast for the weekend, I’m expecting the counts to improve.

If you’re planning a tuna trip, make sure and bring at least one heavy set up in case the bigger bluefin bite. If I was going, I’d bring a 7-foot graphite composite rod, like a Calstar 700H or XH, matched with a Penn Torque 30 full of 80# spectra and a short 60# fluorocarbon leader. This combo is light enough to fish a bait properly, but will allow you to absolutely destroy a 100 pound class tuna. Remember; fish your drag tight (at least 15 pounds of drag with 60# leader). Most of these tuna are lost due to hook pulls or the line wear because the fishermen are scared to pull hard on them. Closer to home, the yellowtail continue to bite at the Coronado Islands. The action is sporadic, but there have been some good bites this week, including the 100+ fish day the San Diego had on Tuesday. My buddy Danny Mun, from Melton Tackle, was on the boat and reported good fishing on the surface iron and flylined mackerel. Danny stuck to fishing the jig and ended up with five yellows to 30 pounds. The bite being as inconsistent as it’s been, your best shot at catching fish is to just pick a day and go.

A more consistent yellowtail bite is going on at Catalina Island. 3/4-day sport boats fishing the front side of the island have been catching fish on most trips. While these fish are smaller and the scores are fairly low, there is a huge volume of fish at the island so if they decide to bite it’s going to get really good. There are some bigger yellows to be caught on the squid grounds at both Catalina and San Clemente Islands.

Both private boaters and sport boats have been catching these fish late night or early morning. The Thunderbird and the Freedom are running overnight trips that are fishing yellows early and then loading up on big rockfish later in the day. These boats should be online this weekend and if you were looking for a shot at a 30 to 40-pound yellowtail they’d be a good choice. There are still some big seabass and yellows being caught by private boaters along the beach but the spots are getting a lot of pressure and not biting all that well. Sport boats are focusing their efforts on the barracuda that have moved in to the Long Beach area and there have been some seabass mixed in with the schools. Larry Morris was fishing on the Southern Cal out of Pierpoint Landing and let his jig sink out while picking out a massive backlash. That miscast resulted in him getting bit on the sink and landing a 35-pound white seabass.

Fishing along the Palos Verdes coast has slowed to a crawl. I fished up there on Saturday and found that Fermin Canyon had upwelled sometime during the week. This resulted in water temperatures 11 degrees colder on the south end of PV than I’d seen the previous week. The water has started to rebound from the 58 degrees it was on Saturday, but it’s going to take a while to recover. The good news is there were still a few calicos willing to bite the Wax Wing in the cold water.

The Santa Monica Bay continues to serve up rockfish with a side of bass for sport boats fishing out of Marina Del Rey, but private boaters experiencing fairly good bass fishing. Further up the line, the Channel Islands are kicking out excellent seabass fishing for boats running out of Ventura landings. Live squid is a must for these fish, so be prepared to catch it yourself. I spoke with Captain Larry Heron of Calico Hunter Charters, who ran a trip to the islands over the weekend. He reported having trouble finding squid early, but metering lots of seabass while he looked. By the time he was able to make bait, the morning bite had ended, so he took that live squid and used it to catch some jumbo reds in shallow water off Santa Cruz Island.