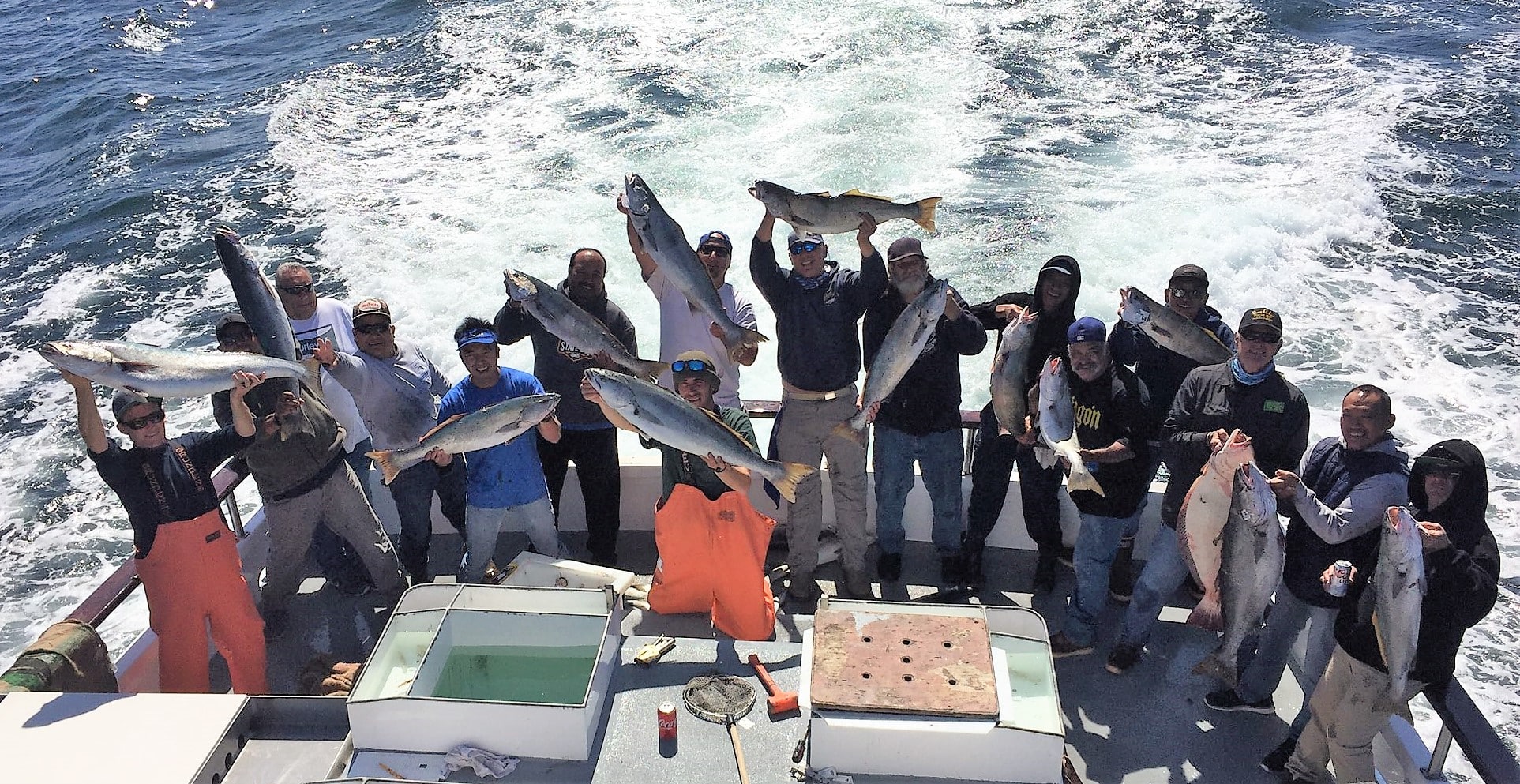 Going into the weekend, the plan was to head out Friday night aboard the Pacific Islander out of Channel Islands Sportfishing in Oxnard.  Come Saturday morning, we’d be at Santa Rosa Island.  If we were really lucky with the conditions, we’d be on the approach to San Miguel, the westernmost island in the chain.  Neither situation came to pass.

The trip was cancelled due to expected heavy wind gusts at the outer islands on Saturday.

I pondered going out of Marina del Rey on Saturday thinking that fishing in Santa Monica Bay might offer some protection, but I didn’t end up making it out. 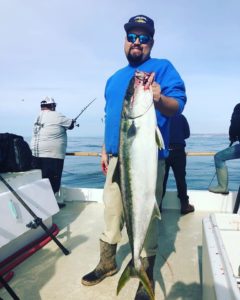 While I was just kind of moping around about not getting my rail time, I noticed that several boats were announcing that they were hanging it up for the year.  Notably, The San Diego had its last run for the year on Saturday.  They managed to get 10 yellows on the anchor down at the The Rockpile when a school swam through.  The fish were caught primarily on yo-yo jigs.  Angler Juan Villegas (right) displays the last yellowtail for 2019 for the boat.

Another major boat announcing it was hanging it up for the year was the Thunderbird.  You’ll remember I was just on the boat a few weeks ago and enjoyed that epic offshore trip with limits of yellowfin and some monster bluefin on the kite.

Several other boats posted Thanksgiving notes on their socials with galleries of memorable catches throughout this year.  Since I didn’t get to fish this last week, guess what’s coming next… 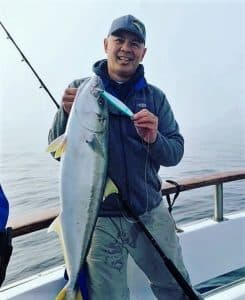 Some sculpin and bass trips, some beach outings for big perch, but the highlight this time of year is always a trip to Colonet (book now for the 2020 trip).  The thing that I love about this trip is that it’s the only one that you can put on your calendar and say, “We’re going yo-yo yellowtail fishing.”  Nothing can beat the visual action of seeing a yellow hit topwater on a surface iron, but it’s electric when you’re reeling in hard, then suddenly you get stopped and you’re heavy.  I went with Capt. Gavin Harbour on the Pacific Queen in January, and he didn’t disappoint.  We were the high boat for the fleet the weekend we went. 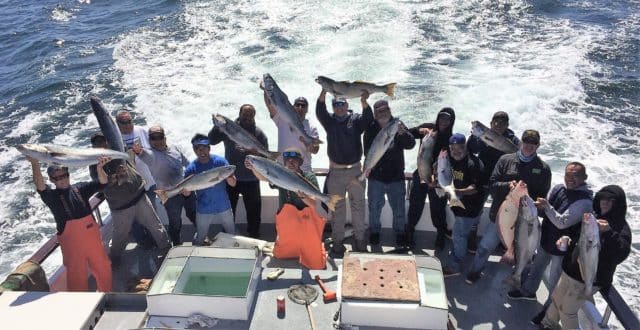 In 2018, I skunked on white seabass, so when they started to bite in April, I jumped at the opportunity.  I fished with Capt. Tucker McCombs on his boat the Endeavor  (above).  Opportunities for seabass happen throughout the year, but when they really go on the chew, it’s a good idea to drop what you’re doing and go.  I did, went midweek and scored.  It’s a good thing I went when I did.  I had a couple of other shots later, but the fish I caught on that trip were the only ones I got all year. 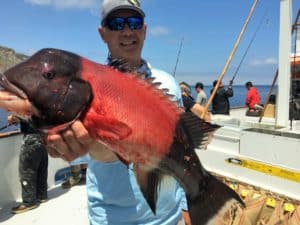 May 2019 was a tough month for me.  My dad passed on Mother’s Day.  I was on the Native Sun when I found out.  Capt. Jeff Walker and the rest of the guys on the crew were super cool.  Even though we had just arrived at Catalina when I got the news, they offered to cut the trip short and turn around.  I didn’t want them to have to do that, so we fished the day out.  Miraculously, when the day was done, I managed to win jackpot on a nice sheephead when a couple of guys who hooked yellows mysteriously got broken off.

I have to believe that Dad had a hand in that happening.

The summer months had me absolutely obsessed with catching big corbina on the sand.  My goal was to catch one over 25-inches, and I felt like it was only a matter of time before finding that fish in the honey hole I was fishing.  I ended up getting my personal best 23-incher in July.  I eventually found that 25+ fish, but I’m still kicking myself for hooking it when I knew there was a knot in my leader.  It busted me off.  That tragedy was somewhat offset though when I caught my first big leopard sharks ever, fishing from Huntington Beach with guide Ben Hervey-Murray of California Sea Fishing in July (below). 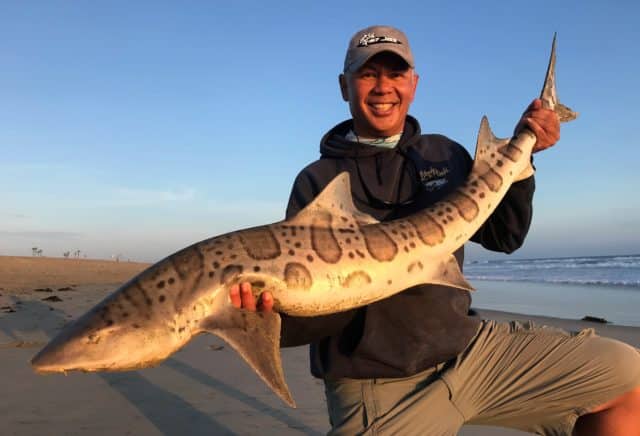 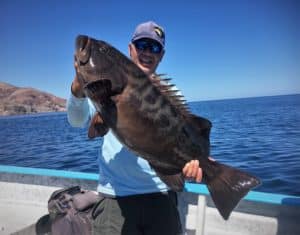 Fall fishing was a really mixed bag.  I caught some salmon when I was up visiting my mom in Seattle.  I caught some yellowfin tuna but no bluefin which is nagging away at me.  Definitely the highlight though was my first ever trip to Bahia de Los Angeles (Bay of LA).  I went on a group tour led by Orchid Martinez of Baja Fishing Convoys.  While in BoLA, I fished with Capt. Joel Prieto Jr. on his boat the Joel Jr. (of course).  What a fun trip!  The variety of fishing that we did, and the new species I caught made it memorable for me.  One of those new species included this gulf grouper caught on our last of 3 days fishing there.

These last couple of months have been dominated by offshore fishing (vs. rockfishing) where I enjoyed my first ever WFO yellowfin trips.  Ironically, those two trips were aboard the T-Bird out of Point Loma Sportfishing, and the aforementioned Thunderbird at Davey’s Locker.

I didn’t catch a legal halibut yet this year, so I’ll probably try to cross that fish off the list this month…weather permitting.

There were some missed opportunities and some ones that got away, but I can’t complain.  Overall, it was a great year of fishing for me.  I hope yours was too.  Good luck if you get out there.