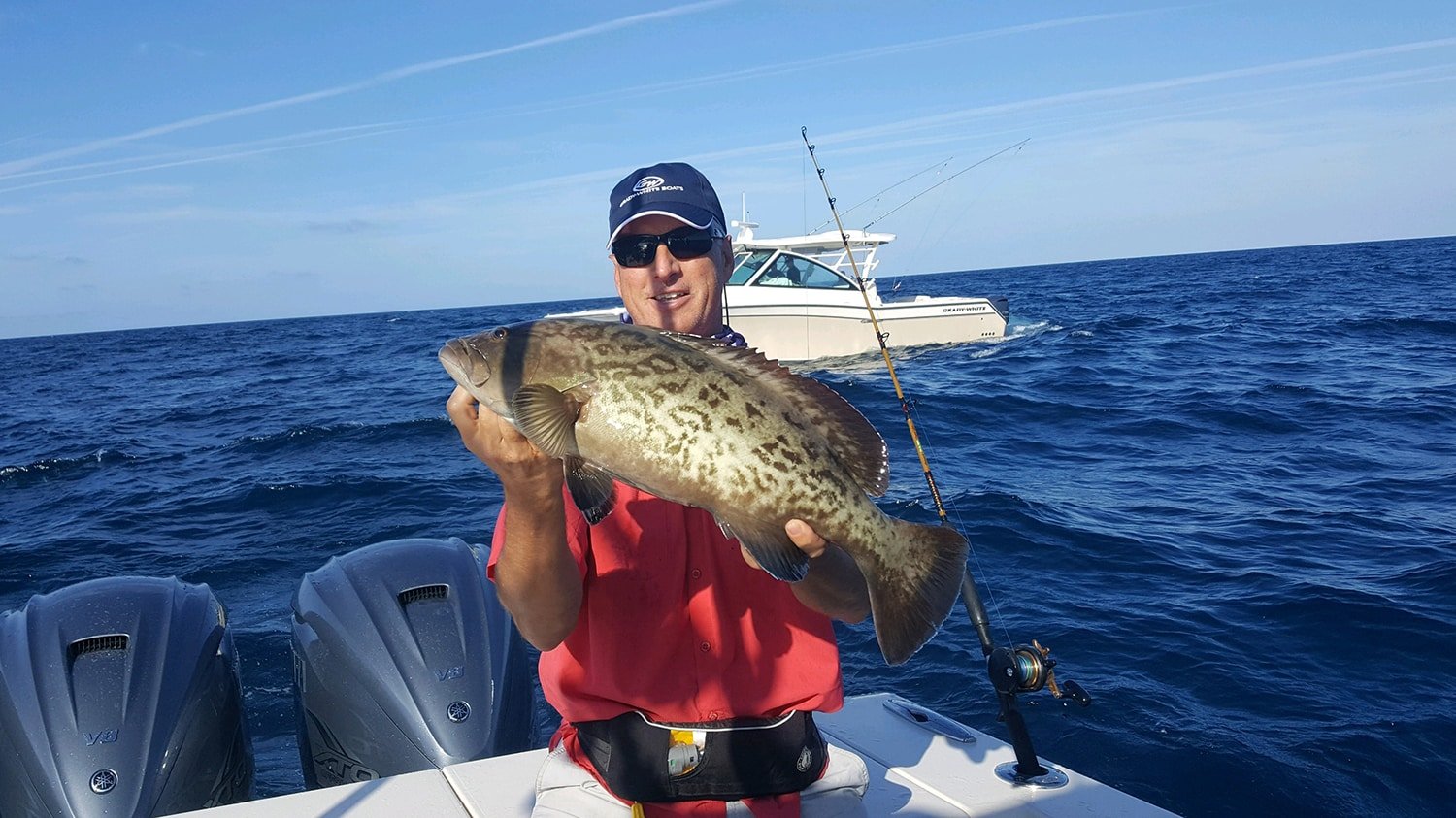 Are outboard joystick systems like the Yamaha Helm Master worth the added expense? And more importantly, can they actually help you catch more fish?

Ever since the introduction of the Yamaha Helm Master system in 2013, people have been talking about how great it is to have joystick control with an outboard-powered boat. But the system can add cost to the tune of tens of thousands of dollars to a boat (exact price is variable depending on the number of outboards and the systems specifics). And what you normally hear people rave about is how easy the joystick makes docking. Yippie. While easy docking is great, we think most of you who are tuned in to BD Outdoors can handle putting your fishboat into its slip. The other and somewhat under-appreciated aspect of Helm Master, however, comes down to something much more important: catching more fish.

We’ve used and enjoyed Helm Master before, but late this summer had the chance to spend a day aboard a Grady-White Canyon 456 rigged with quad Yamaha F425 XTO outboards.

Naturally, this rig was fitted out with every perk and pleasure (air-conditioning in the cockpit, anyone?) including Yamaha Helm Master. But now the system includes what Yamaha calls “Set Point.” Set Point integrates GPS and heading sensors to initiate any one of three modes: Stay Point, Fish Point, and Drift Point.

In Stay Point mode, the system will nail down your boat’s position and heading and hold it to (Yamaha’s claim, here) within 10-feet in ideal conditions and within 75-feet in high winds and/or currents. In Fish Point mode the system holds position, but not heading. It can use much lower rpm since the system doesn’t have to fight to keep the bow into the wind or current, and is most applicable to hovering the boat stern-to over structure. And in Drift Point mode, the heading is maintained but the position is not, a function that will prove helpful for forms of drift fishing like kite fishing, when you might want to allow the boat to move off-station but maintain the same orientation in the wind or current.

That all sounds great, but in real-world use does it measure up?

After running about 25 miles out of Morehead City, we reached a wreck about 120’ long and 30’ or so wide. Conditions were winds of around 10 knots, with mellow, pleasantly-spaced two foot seas. Four of us grabbed rods and baited up, while the captain engaged Fish Point on the Yamaha Helm Master and called for lines-out. Standing in the cockpit and along the gunwales, it was very much like fishing at anchor on a dead-calm day. The engines held the boat in place without abnormal or obtrusive shifting or revving. There was no swinging, so lines never went under the boat. It didn’t take long for a rod to start bending over.

We caught a few more gags and then the bite slowed, so my fish-brain said it was time to shift positioning over the wreck a bit. Usually, I would slack back 15 or 20-feet on the anchor line to remain on the wreckage but get the baits into a slightly different area, where we might find some new fish. I was about to suggest as much. But before I did so the bite came on again. This time, however, it was snapper.

Several times the action slacked off, then picked up again. At times we reeled up black seabass, vermillion snappers, and porgy on top of the grouper and red snapper. Oddly, the fish seemed to come in species-specific waves. As an angler, happily cranking in the cockpit, I didn’t understand what was going on until I took a break, grabbed a water, and kicked back in the passenger’s seat for a brief rest. Then I looked at the chartplotter – and what had been happening suddenly became clear.

The plotter showed a zigging, zagging line creeping 70 or 80-feet from south to north. When I asked about it, the captain showed me how he tapped the joystick in one direction or the other to make a slow 10-foot move. Essentially, he had been “slacking” the “virtual” anchor line in 10-foot increments. He had also been relocating that virtual anchor from east to west in 10-foot increments, at the same time. Whenever the fishing slacked off, he made these tiny moves by merely tapping the joystick and the boat shifted gently enough that even with a line on the bottom, I couldn’t tell it was happening.

You think a feature like that might help you fish a wreck or reef more effectively? Damn straight.

Added bonus: by eliminating anchor swing, fishing under Fish Point allowed us to use smaller weights than normal. Six ounces was more than enough to hold in 100-plus-foot depths, even when the wind picked up and sea conditions increased to a slightly choppy three feet.

Added-double-bonus: with four or five anglers dropping lines all day long, we never had a single tangle. Not one. We never wrapped a prop, and it was extremely rare to snag the wreck (it might have happened twice). Again, the only factor I can think to credit is the elimination of regular anchor swing.

What are the down-sides to fishing under Yamaha Helm Master power? The cost of the system, obviously, will be an impediment to some people. But the only real-world negative encountered was that occasionally, after the seas had kicked up, a side-effect of holding the stern into the waves was that some spray did make its way into the cockpit. Three or four times through the course of the afternoon after the waves had built, I noticed it happen. Never enough to soak anyone and I don’t recall ever even getting wet myself, but it did happen.

So: what about the fishing effectiveness of Drift Point or Stay Point? We can’t speak to it directly, since those weren’t the functions being employed. But as for Fish Point, let there be no doubt: if you’re fishing in a static position or in a way in which you might normally want to slowly drift or shift position, this feature absolutely, positively, will help you catch more fish. 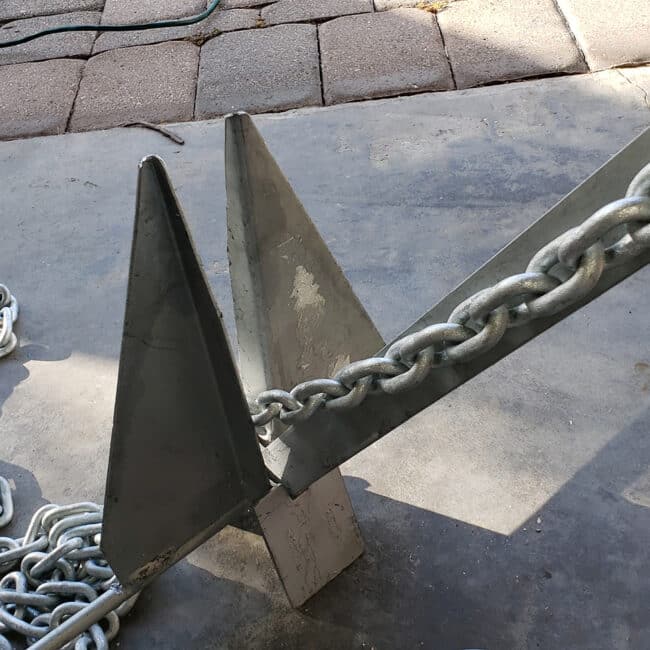 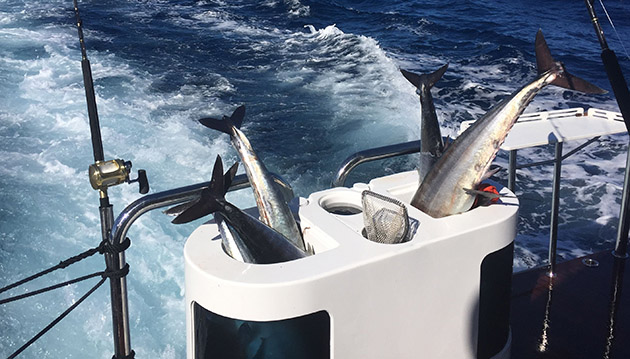