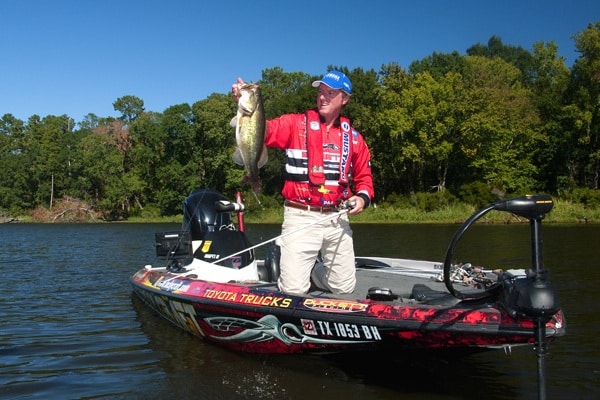 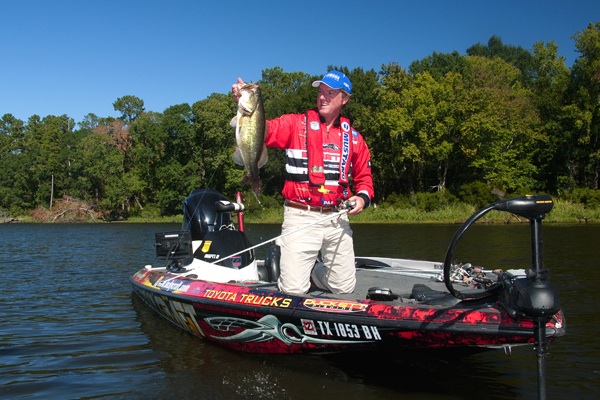 There’s a good reason tournament angler Kelly Jordon describes the hot months of summer as one of his favorite bass fishing seasons. The Yamaha Pro follows fish from shallow water to deep during the day, a technique he learned during years of guiding at Lake Fork in Texas.

“The key to following bass in summer is fishing an area that has some type of route like an old roadbed, a tree line, or a creek channel leading from the shallows to deep water nearby,”

Jordon emphasizes. “The bass move back and forth between shallow water and deep, so finding a shallow flat, a long point, or a cove that gradually falls into deeper depths is always worth trying. “This movement may not be more than a hundred yards, or it may be 300 to 400 yards. It depends on what the deeper water offers the bass. At the same time, if there is abundant shallow cover, particularly hydrilla or some other thick vegetation, the bass will usually stay shallow longer, too.” Jordon strongly recommends starting a July or August day of bass fishing 30 to 45 minutes before daylight because that is when fish are most likely to be in very shallow water. He believes these bass may be the same fish that moved shallow to feed during the night, and they’re extremely susceptible to topwater lures like buzz baits and frogs. 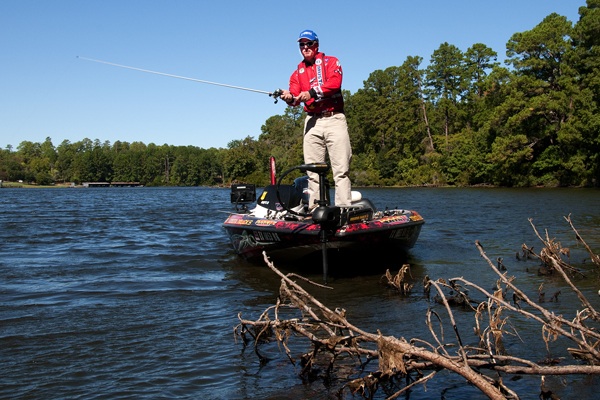 “This shallow bite does not last long after the sun rises,” the Yamaha Pro continues, “so I really like a buzz bait because I can make long casts and cover a lot of water. I try to key on cover like logs and laydowns, lily pads, and rocks, and generally in just two feet of water or less. I work the cover thoroughly, too, usually making two or three casts to the same object with a slow, steady retrieve to give a fish plenty of time to hit it.”

When this early, shallow water action ends, the Yamaha Pro changes to a shallow running crankbait, often a square bill model, and begins fishing slightly deeper water down to five or six feet. He may also try flipping soft plastics if the cover is thick enough, but his primary choice is the crankbait. “What I’m trying to do is take advantage of all my options in relatively shallow water before the fish move,” Jordon continues. “Frequently, I’ll fish the same cover with the crankbait that I fished with the buzz bait, simply because it has such a different action. Buzz baits bring reaction strikes, while the crankbait may entice more of a feeding strike.”

When this bite does end, Jordon moves further out to 12- to 20-foot depths, studying his electronics to locate both steeper depth changes as well as possible schools of baitfish. If he has found a creek channel or even a ditch leading from the shallow water toward deeper water, this is where he concentrates his search. If he’s been fishing a point, he just keeps following it further and further out in the deeper water. “I’ll really cover this water thoroughly with a deep diving crankbait, grinding it along the bottom across any breaklines from shallow water to deep,” he explains. “Places I really look for are bends in a channel, and cover like rocks, stumps, and flooded timber. I just keep working further out into the deeper water because I know eventually I will find the fish again.

Jordon emphasizes the importance of looking for baitfish, especially shad, as he moves into this deeper zone. Baitfish make this same movement, and the bass follow them. They’ll show up on electronics because they’ll gather in large schools, and the bass will hover just below them.

“Summer bass fishing doesn’t need to be a long, hot exercise in deep water crankbaiting or dragging plastic worms along the bottom,” concludes the Yamaha Pro. “As long as a fisherman is willing to start fishing early, he will nearly always find some bass in shallow water, and this can be a truly magical time to be on the water.

“Then all you need to do is change your lures and gradually work out into deeper water. You really can follow the bass as they make this movement.” 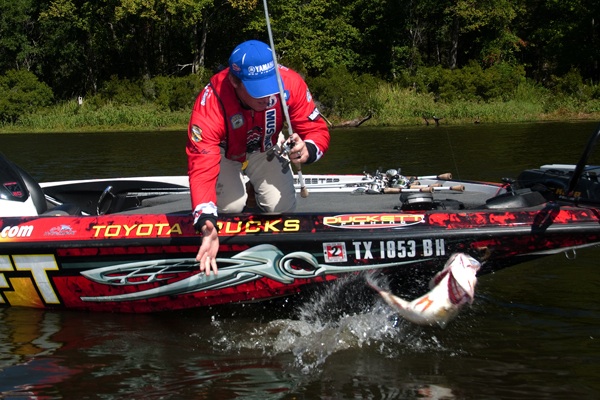