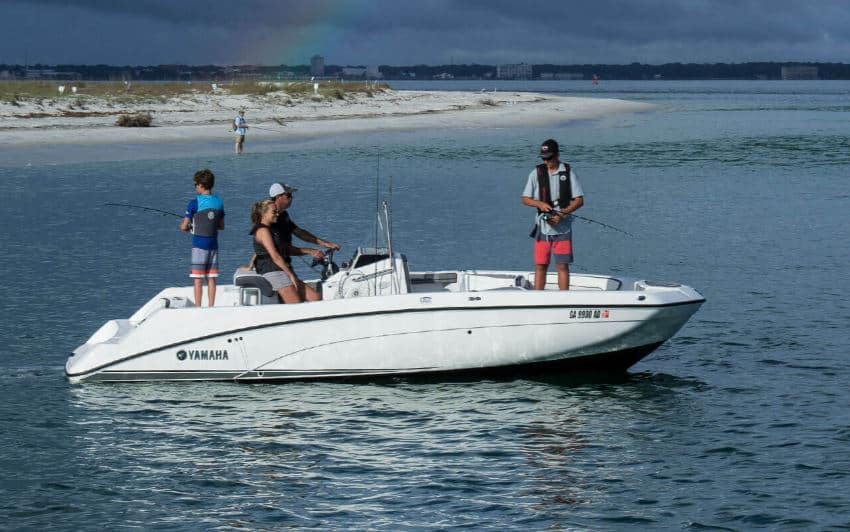 Can a jet boat be a fishing boat? Yamaha says yes, with the 210 FSH.

When you’re looking at center console fishing boats, you’re almost certainly looking at boats powered by outboards. On rare occasions, you may be looking at boats with stern drives or inboards. But, what about jet drives? Setting aside those outboard jet rigs used in rocky rivers, it’s almost unheard-of: Almost.

A few years ago, Yamaha Watercraft, the division of Yamaha Motors that makes PWCs and jet boat runabouts, introduced the 190 FSH. It was their first attempt at building a center console fishing boat and most fishermen agreed that they did a nice job with it. But at 19-feet was also a bit small for many anglers. Now, however, they’ve grown the line and introduced the 210 FSH.

Doing away with the outboard and instead having a pair of twin TR-1 1049cc, three-cylinder, four-stroke engines (Yamaha doesn’t publish a horsepower rating, but word on the street is that they produce about 130 horses each), coupled to 155 MM high-pressure jet drives, does change the fishability of the boat. The difference in the stern is dramatic, with no big outboard in the way and of course, no props to tangle around. It also allowed Yamaha to design in a two-level platform, which is ideal for use as an aft casting deck in good conditions.

One has to wonder about the effect of the jets’ bubble-stream on the fish, especially when trolling or probing the shallows. Yamaha addresses the issue by offering a custom trolling motor mount for the bow. We’d say it’s a must-have for serious anglers, along with the T-top and rocket launchers, which means most fish-heads will want the upgraded “Sport” model (which starts at $46K and change, as opposed to $41K and change for the base version. Note that these numbers include a tandem axel trailer with disk brakes).

Having a jet-powered fishing boat gains another distinct advantage when it comes to fishing the shallows. The boat drafts a mere 1’5” and you’re guaranteed to absolutely, positively, never ever ding a prop no matter what. On the flip side of the equation, like most jet boats it’s louder and higher-pitched than a modern four-stroke outboard at cruise, and it doesn’t offer quite as much speed as one might expect from a twin-engine 21-footer. Top-end is around 44 mph and at cruising speed you’re looking at more like 30 mph. Efficiency is better than expected, however, with the boat getting over 3.0 mpg through much of the powerband and over 3.5 mpg at the most efficient cruise.

Even though they aren’t exactly the most experienced company when it comes to making fishing boats, Yamaha did a respectable job of delivering the accouterments you need. There’s an insulated fishbox under the starboard bow seat and stowage in the port side (cushions for each can be pulled and left at home so you can use the seats as bow casting platforms on serious fishing trips); triple vertical rodracks on either side of the console (and grommets in the T-top placed accordingly to let rod tips pass through); four rocket launchers on the T-top; in-deck storage sized for a five-gallon bucket; a 26-gallon livewell; and a raw water washdown. The selection of flush-mount rodholders gets a special call-out, since Yamaha places two up front in the gunwales, four aft in the gunwales, and two more in the transom. That’s a much better spread of standard-issue rodholders than most 21-foot center consoles offer, so thank you, Yamaha.

As one might expect from Yamaha Watercraft, fishability aside there’s also a good deal of attention paid to family fun. While we’re certainly not about to condone activities like pulling tow-toys and water skiing – which may be marginally enjoyable but at their core are a horrifying waste of valuable fishing time – if you choose to allow your offspring to engage in such fishless activities, the 210 FSH is ready for duty. It has a ski tow-eye, a Clarion stereo system with Bluetooth connectivity and four speakers, and a compact changing room/head compartment with a privacy curtain and a swing-up forward console entry.

Just for the record, while we haven’t yet had the opportunity to actually wet a line on the 210 FSH we did spend an entire day casting for stripers and specks on the 190 FSH. And truth be told, when the boat’s at rest there’s not much difference between casting from it and casting from an outboard-powered boat. In fact, the biggest thing we noticed was that the engine-less transom is hands-down superior for fishing. Is that enough to sell you on a jet-powered center console? We don’t know, but we’d be willing to bet on one thing: there will be more Yamaha center console jet boat models hitting the water in the future.