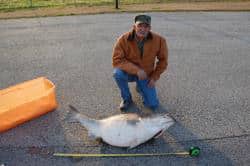 Big Bass: On May 13, 2013, James Bramlett of Dora, Ala., received a highly anticipated call from the International Game Fish Association (IGFA). The World Records Coordinator of the IGFA, Jack Vitek, informed Bramlett that his state record, a 69-pound, 9-ounce landlocked striped bass, now holds the world record for that species. 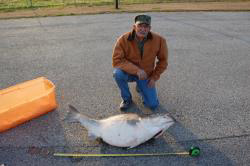 According to Jason Schratwieser, IGFA Conservation Director, the organization was honored to acknowledge Bramlett for his catch. “The new record has generated a buzz among anglers around the world,” said Schratwieser.

Bramlett hooked the goliath on February 28, 2013, in the Warrior River, while free-lining shad near the Gorgas Steam Plant. He first saw the fish chasing skipjack about a foot under the water shortly after 11 a.m. 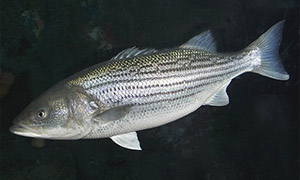 A skilled fisherman, Bramlett has caught several trophy striped bass and blue catfish on the Warrior River. He knew right away this fish was something special. “I had been catching three to five-pound bass all morning, which is fairly common for February,” said Bramlett. “I had never dreamed of a stripe like that coming up. It had the skipjack flying out of the water.” Bramlett cast his bait after watching the fish feed on the surface. It took only minutes for the striper to hit. Bramlett wrestled the giant for more than 20 minutes until finally hauling the fish into the boat. A river barge captain and his crew witnessed his catch.

“That bait clicker went off and it sounded like grandma’s sewing machine,”

Bramlett said. “By the time I picked it up, it had taken at least 100-feet of line. I pulled back and I knew then I had a solid hook set.” Bramlett’s striped bass shattered the Alabama state record by nearly 15 pounds and eclipsed the previous IGFA world record of 67-pound, 8-ounce, a record that stood for two decades. Bramlett’s catch has been mounted and will be on display temporarily at Sayre Auto Parts at 7192 Bankhead Hwy in Dora, Alabama.