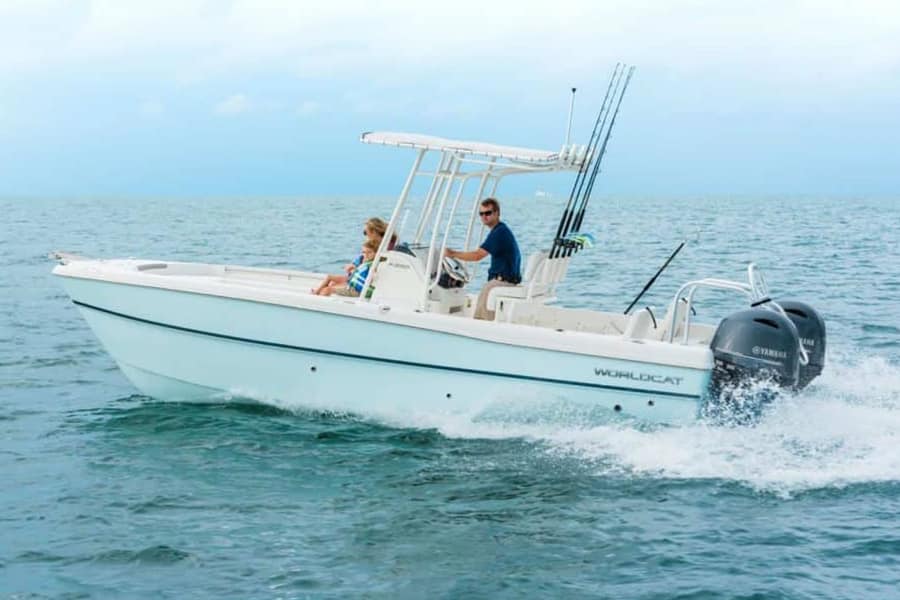 This little cat has the ability to deliver.

If you love the ride of power catamarans and you want a boat small enough for easy trailering and shoal-water capabilities, there aren’t a ton of options on the market for you to choose from. In fact, there are just a handful of builders making small cats these days. One you’ll almost certainly end up considering is the World Cat 230CC.

The number-one stand-out feature of the 230CC is the very same trait all cat-lovers invariably point out: A smooth ride in the chop. Two knife-like entries have a lot less impact than one that’s shaped more like a spoon, and on top of that air gets compressed in the tunnel as the boat moves forward at planning speeds. This compressed air forms a cushion that further softens the impacts as the boat meets waves. In a tight one- to two-foot bay chop that would have most 23-foot monohulls slapping and banging at speeds of 25-plus-mph, the World Cat gets on top of the waves and delivers what feels like a magic carpet ride. In three-footers, there’s a lot more motion, but the boat still doesn’t slam like a “regular” one.

Another perk gained by the twin-hulled design is increased efficiency. With a pair of Yamaha F115 outboards on the transom the 230CC cruises at right around 30-mph while getting better than 2.7-mpg, and it maintains almost 2.0-mpg at wide-open (where top-end hits 41.3-mph). Put twins on a boat of this size and you’ll usually see more like 2.5- or 2.6-mpg at cruise and under 1.5 at wide-open. And while a 23-footer is certainly on the small side for twin engines (which we have to note does boost purchase and operational costs), it’s nice to have the pair of eggbeaters back there when the weather window appears and you decide to make an offshore foray.

No matter where you plan to cast, troll, or drop a bait, the 230 is laid out to maximize fishable space. The console has a very small footprint which means it’s used as a head compartment is marginal at best, but pass-through room on the sides doesn’t get any better on a 23-footer. The stern has an aft casting deck with flip-up jump seats on the sides, stowage underneath, and a 30-gallon livewell in the center. The fold-up swim ladder and rails on the aft platform has the potential to get in the way while fishing, but it also gives you something solid to lean against when standing up back there in rough conditions. Call it a mixed blessing.

The forward casting deck is elevated on the sides and in the center up forward and has drop-in backrests so it can do double-duty as seating. We say leave those cushions and backrests in the garage, because with nothing but nonskid underfoot there’s enough room up there for three people to stand and cast. There’s also a ton of stowage up front, especially for a 23-footer, with 37.5-gallon fishboxes under each side plus a smaller center compartment. All of the hatches are well-finished, gasketed, raise on gas-assist struts, and dog down tightly with heavy rubber tension latches. Good stuff.

Rounding out the fishing features, the 230CC comes with four flush-mount rodholders in the gunwales, four under-gunwale racks, four rocket launchers on the back of the post and across the back of the top, and a raw water washdown. All this stuff comes standard, and there are actually very few cost-boosting accessories listed as optional. You can get a juiced-up stereo system and beyond there, there’s just electronics to consider. The helm has enough space for flush-mounting a screen up to 12” and the factors offers a Garmin GPSMAP 8610xsv package including an Airmar B150M transducer and VHF radio.

If you’re a cat-lover on the hunt for a relatively small, relatively simple rig, there’s no doubt you’ll run across the World Cat 230CC. If it strikes your fancy, we’ll say the same thing we often do: don’t take our word for how well this boat runs but take one for a test run. And in this case, we think you should pick the windiest, nastiest day possible. Smart money says that after running the twin hulls through some slop, you’ll be more of a cat fan than ever before.