The 16th Annual Western Outdoor News/Yamaha Los Cabo’s Tuna Jackpot Tournament has never been a charity tournament, yet there has always been a charity component. This year, the damage and destruction in the area brought about from the powerful winds and rain of Hurricane “Odile” destroying everything in its path, specifically the homes and properties of the families of sportfishing captains and crews. 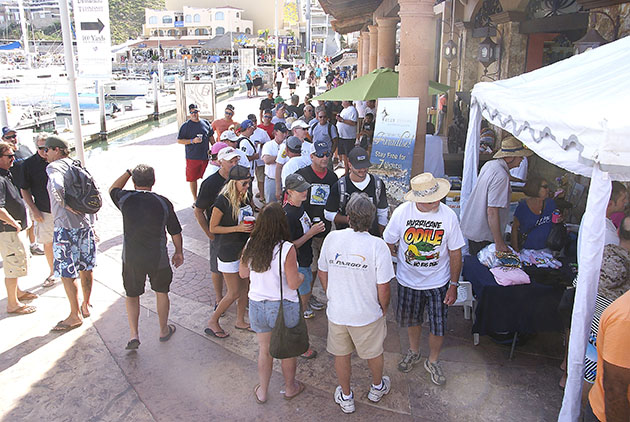 With that in mind, the tournament management determined that all proceeds (100% without any administration fees) would be used to build 15 homes for specifically selected families; in addition to the usual efforts on behalf of charity, there were spontaneous acts of kindness by individuals, teams and, of course, our great sponsors.

Some old and some new innovative and fun ways to raise money for the cause arose — not taking away from the “Party Harder” theme, simply adding more purpose to the party.

There were the usual contests:

The ever popular “Find the Sticker Contest” for four (4) pair of Costas won by the Hook Line and Drinker Team.

“The Silent Auction” for a number of items donated by both individuals and sponsors that raised $8,200. 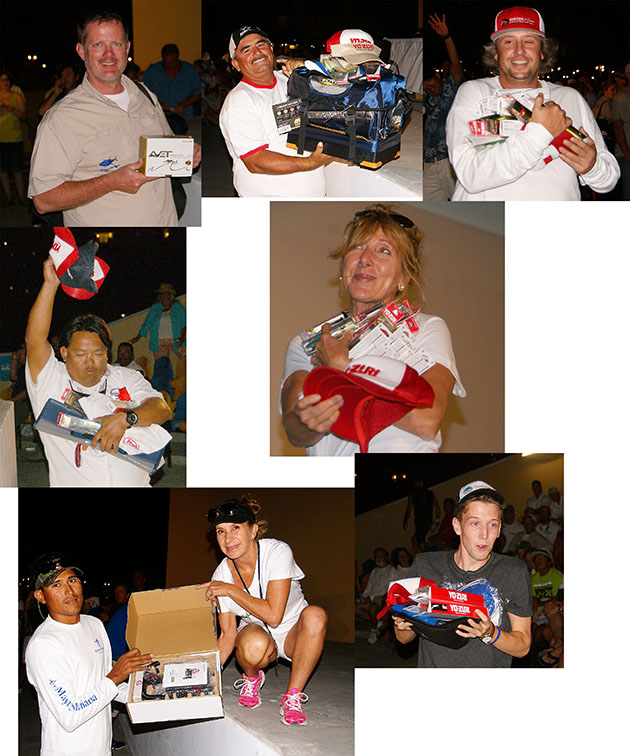 • Jon Petty Goldsmith Jewelry won team 110 Jack Morrow (Who wrote a check and attached to it to his donation with a note that if he was not the successful bidder to simply consider it a donation to the housing fund.)

• The Simrad Package was the most contested item of the sale and was ultimately won by Team 48. 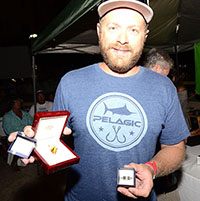 Minerva’s offered a special new, official short-sleeve Tournament t-shirt with custom artwork; only available at check-in. Every dollar from these also went to the Family Housing Fund. 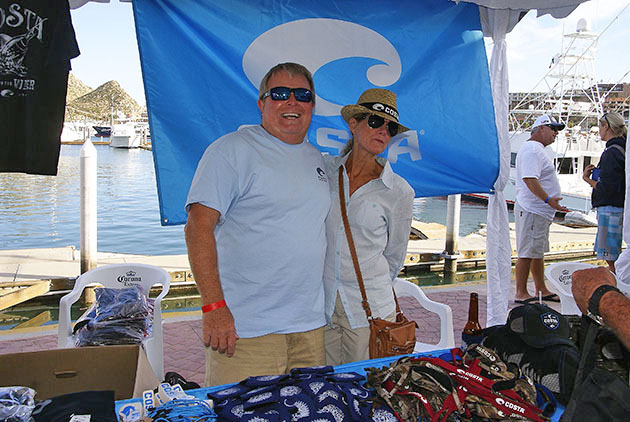 Dave and Amy Bulthuis again this year used the Costa Booth on opening day to raise money by selling Costa items to anyone for whatever they were willing to donate.

In addition Costa sponsored the third annual Costa Charity Charter attended by 130-plus staff and dignitaries held on Friday morning aboard “Cabo Mar”. The event was catered by the staff at Captain Tony’s Restaurant and Pisces Sportfishing. It included breakfast burritos and mimosas.

The mood was festive as the 65-foot long and 36-foot wide double-decker catamaran motored out to the start line. Adding to the festive mood was the perky song, “Happy” by Pharrell Williams, which shattered the morning quiet.

Everyone waved and cheered as their favorite team cruised by flashing their Team number and of course “showing their Costas” for the Costa’s “Show your Costa’s” contest. 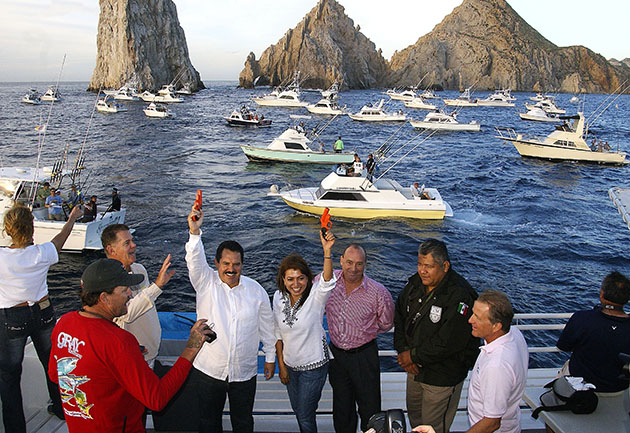 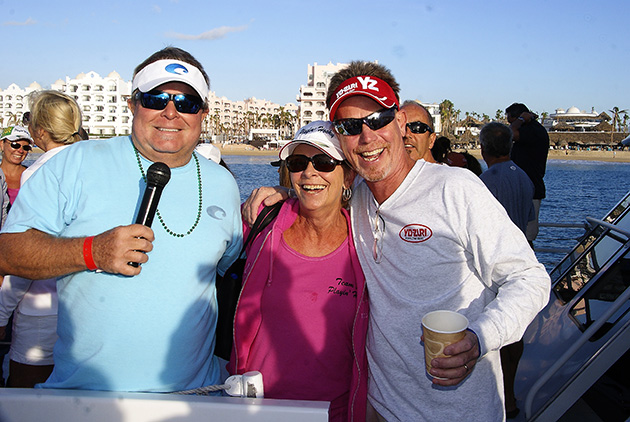 When “Happy” was cranked back up, the boat slowly made its way closer to Cape Rocks for photos and even a few selfies. Then Bulthuis on the bow began raffling off six pair of Costa Sunglasses, the winner’s choice. The Cabo Mar’s DJ cranked up the music and initiated a conga line that threaded its way through the boat and up to the top deck where the spontaneous dancing continued as they idled back to the IGY Marina.

Bill Dobbelear, General Manager of Gray’s Taxidermy, based in Pompano Beach, Florida, along with his staff, perennial supporters, sold special raffle tickets for $6,000 worth of Gray’s Taxidermy products during the event to be raffled during the final night’s activities where he announced that the effort had netted another $3,000 toward the 15 houses.

Not done yet, and without Pat McDonell‘s knowledge, Dave and Bill hatched another ambitious plan for a unique and unusual trip that involved all the attending sponsors — a trip of a lifetime that could not be purchased anywhere, anytime, except at the Saturday night Award’s affair.

This remarkable trip consisted of the following: a party of four would be flown to Orlando, Fla. from anywhere in the U.S. where they would tour the Costa plant and design their own pair of sunglasses. Then they would go on a hosted trip to fish in Mosquito Lagoon.

After which they would travel to Port St. Lucie, Fla. and tour the Yo-Zuri plant where they would be allowed to select $2,000 worth of lures to use on a specially arranged fishing trip with one of Florida’s premier guides, Mike Holliday, on the Indian River/St. Lucie River targeting redfish, snook and tarpon. Buddy Prause of Yo-Zuri promised there would be some alcohol involved.

From there, it’s Pompano Beach, Fla. to the home of Gray’s Taxidermy where the group will tour the plant and paint their own fish mount with the help of the staff. After that, they will fish aboard Dobbelear’s boat, “Bill Collector,” one of the top deep-drop swordfish boats in Florida. The group will then return home but the package still has more.

Also included, complements of WON, is a free entry in the 17th Annual Los Cabos Tuna Jackpot with transfers to and from Los Cabos Airport as well as two double occupancy hotel rooms during the entire tournament, plus one of Pisces Sportfishing’s top boats to fish aboard for the two-day event…all the hooks (Mustad) and Fluorocarbon leader (Seaguar) material the group needs for the trip and finally four (4) Reactor Titanium Watches specially engraved commemorating the trip. 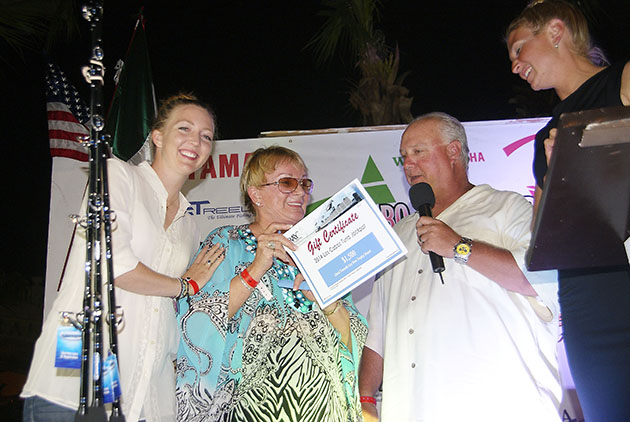 When offered in the live auction, the bidding was lively and by the time it was over the final bid was $17,000 won by Team 124! Fishing for their first time in the event, Team 124, Russel Gall, St. Louis, Missouri, Chris Wilson, St. Louis, Missouri, Tim Elam, Rockford, Minn., and Courtney Lehman, Zionsville, Ind., won $32,600 for their 3rd place 193.3 tuna caught on day 2, and they decided to leverage some of their winnings into another trip of a lifetime. 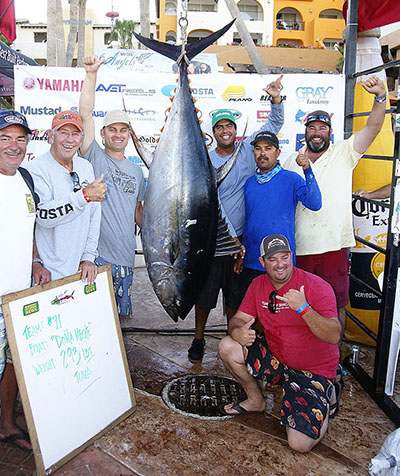 Then there were the raffle drawings, one of the event’s most popular fundraisers with tickets that are good for the entire four days, allowing teams and individuals to win multiple times on the same ticket. Also included is the opportunity for one team to win the GRAND RAFFLE that is part of all of the drawings.

It includes four of every item used for the drawings. This year that included: four Avet reels, four Cousins rods, (They are beefy, super high quality, and are made for BIG tuna), four Reactor watches, four hotel stays at the Wyndham, Seaguar fluoro packs, Mustad hooks, and Plano tackle boxes. A $10,000 package with one of the Simrad marine mounted VHF radios in the mix as well. 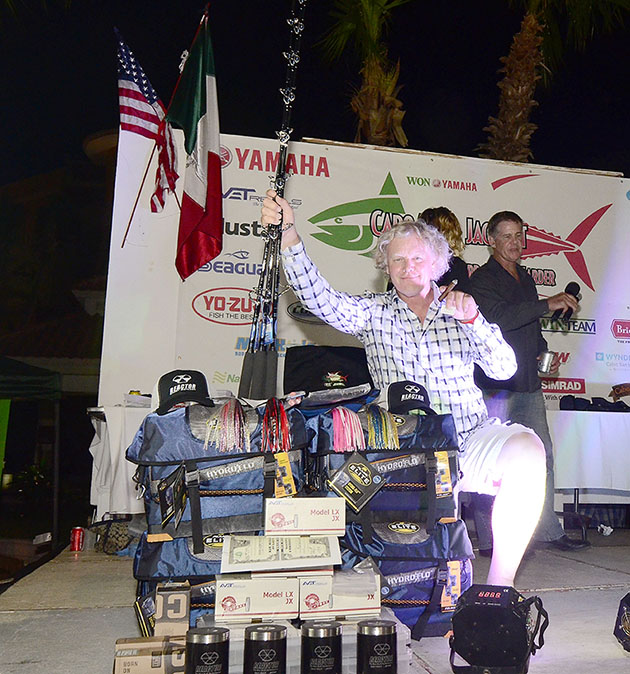 This year’s lucky winner was actually part of the same team that another member, Brian Solomon, had won the Hard Luck Award: Team 44, Solomon’s Tuna Slayers team member, Scott Ortar … dispelling the notion that hard luck and good fortune can’t happen at the same time … congratulations to all of the team!

While Odile was a devastating and catastrophic event that will be remembered for many years, repeating the hard luck/good fortune theme one more time.

Odile seems to have had a profound impact in raising a sense of community spirit that has never been witnessed in Baja before. 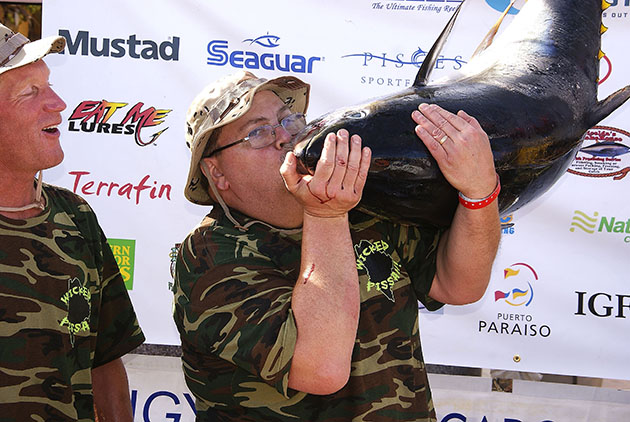 Thanks to everyone’s hard work, individual sacrifice and support, WON was able to spearhead this effort that totaled $50,000 toward funding the construction on the homes for the 15 displaced families.