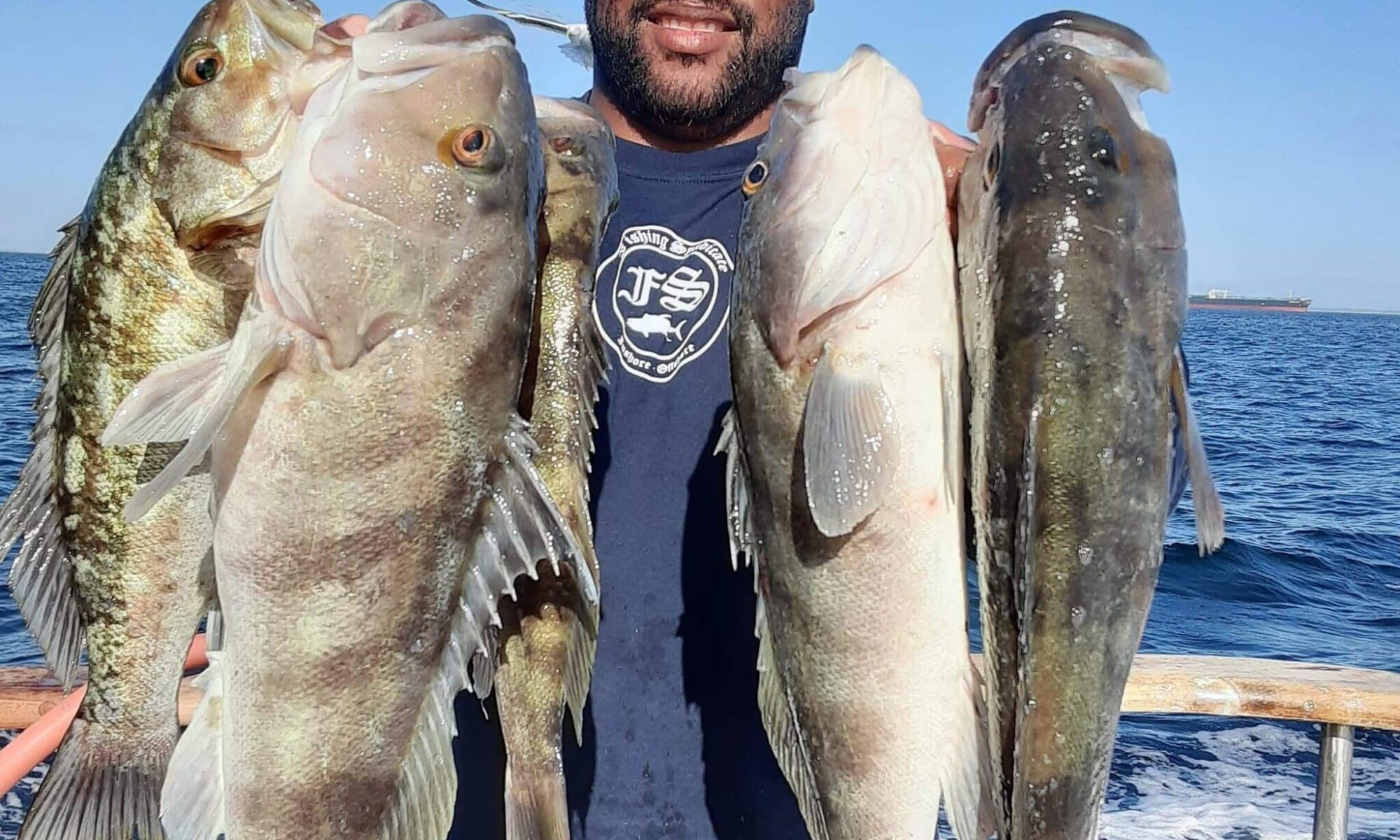 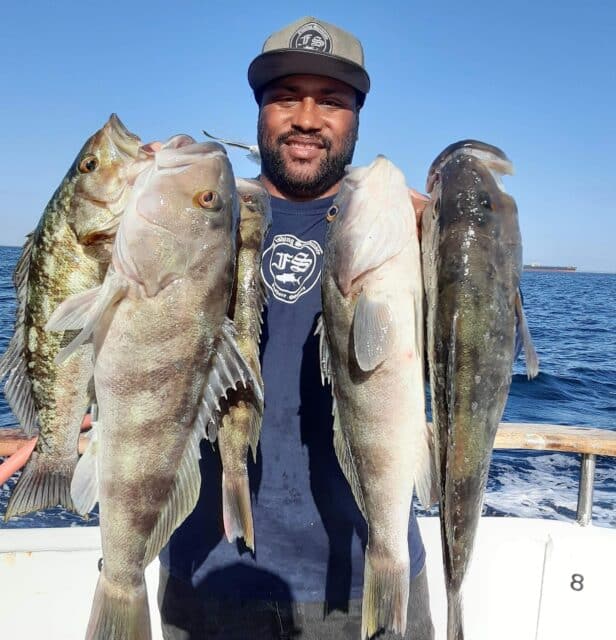 Well here we are…the last week before the rockfishing season opens.  The opener means much more than the ability to keep rockfish.  It means the fleet will be back out there in full force.  When you have rockfishing as a fallback, it allows our talented captains to go out exploring for everything else out there to catch.

From the looks of it, the season will kick off with a BANG!  I’ve heard reports of yellowtail and bluefin being caught by private boat anglers for weeks now.  And then this last weekend, the Pacific Queen scored their first (and the rest of the fleet’s too) bluefin of the year when they couldn’t find the yellows at Colonet and decided to take a peek outside (right).

Yes, there is much to look forward to for the 2020 Southern California sportfishing season.

As the greater fishing season opens, the winter bass season pretty much comes to an end.  The local boats will switch from targeting bass and sculpin to a more predictable (and better paying) program focused on rockfishing.  It was a goal of mine to improve my winter bass game this year and I got out about a half dozen times over the last 8 weeks putting my time in at the rail.  The concept is simple enough.  The water is colder, so the fish are more bottom oriented and sluggish.  You want a slow, bottom oriented presentation and put it right in front of their face to elicit a bite.  In practice, there’s more to it than meets the eye.  Here are a few things I learned along the way… 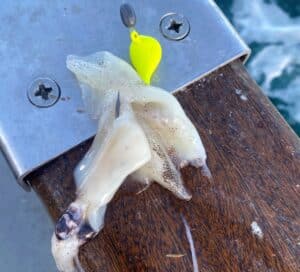 The classic presentation is a 1.5 or 2 oz. banana head style leadhead (left) with a whole squid pinned on it.  The captain will usually say something like, “The structure is primarily off our port side.”  The structure, reef and rocks, is important because not only are the fish bottom oriented, they also like to position themselves close to structure.  Cast out, let your line get all the way down. then slowly drag it along the bottom.  Find the structure, and you’ll find the fish.

Typically, you’re fishing in about a 100-feet of water, but when I went on the Sea Watch out of Seaforth Landing, Capt. Kris Karpow was setting up as shallow as 40-feet, so I had to adjust my weight down accordingly.  When considering weight, heavier is NOT better.  You’ll get stuck more and lose more tackle being too heavy.  Keep in mind, it’s a short trip.  Re-tying wastes valuable time.  You’re looking for that balance between holding the bottom and being light enough to bounce over rocks instead of wedging into them.

Maybe one of the bigger things I learned though, was that the leadhead and squid presentation isn’t the only effective one.  A sliding sinker straight to the hook also worked.  I also had a lot of success using the Carolina Rig and convinced some people along the way to give it a go for themselves.  My personal theory on why it works is that it doesn’t anchor your bait directly to the bottom.  There’s some play there to rise and fall, and dance with the current.  Be careful though about how long of a fluoro leader you use.  I found 6-8″ was good.  Any longer and it tended to get tangled on itself.

My favorite setup in my entire arsenal is my 9-foot Teramar swimbait rod paired with a Tranx 400.  I typically refer to this combo as my “bass gear,” but I’ve bested yellows, blacks and even my personal best white seabass (62-pounds) on this setup.  While it certainly worked in this application, it’s not ideal.  Similar to the grouper fishing I did last September in Bay of LA, the key to successfully getting that fish on the boat after it bites is winning the first few feet.  You want to get them headed up quickly instead of allowing them to get back in their rocky hiding spot and breaking you off.

I looked at what my buddy and DFW agent, Marcus Fain (top) was using.  Marcus excels at this fishing.  Not a baitcaster to be found.  He had all heavier rods and small conventional reels.  I found myself gravitating towards a similar setup using my 30# rod, paired with a Torium 14HG.  The Torium has a 6.3:1 gear ratio.  It was an effective combo…stiffer rod and a couple of quick turns on the power handle puts that few first critical feet of line back on the reel quickly.

I met an angler on the City of Long Beach named Cal.  The first time I fished with him, Cal caught a lofty 7 bass (right).  This is Cal’s favorite kind of fishing, and he’s definitely put in his time learning it.  The next time I saw him, I asked him, “Are you going to catch 7 bass again today?”  I’ll try, he responded.  “What do you think makes you successful at this kind of fishing?”

“Lots of people of people are lazy about how they approach this kind of fishing.  I’m active all the time.”

Cal explained that if something isn’t working, he switches it up.  He tries different presentations, line weights, leadhead colors, etc.  I thought about what Cal said a lot.  I think I was able to make good progress improving my winter bass game this season because I was unwittingly “active fishing.”  I kept experimenting trying to figure out what worked for different situations and what just worked for me.  Along with the things Cal said, you can apply this active fishing philosophy in different ways.  For example, you found the rock, but you can’t get a bite.  Before quitting that spot at the rail and trying another one, try a different angle of approach to the same structure.

I was on a trip last week aboard the Monte Carlo.  Capt. Walt Pollock was saying that it was a small spot of structure and we were right on top of it. 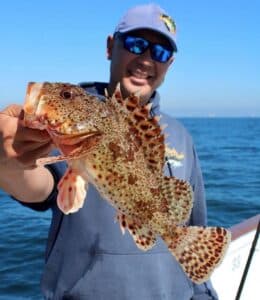 Most people were flipping out past it and then dragging back toward the boat until they found it.  I tried that approach at first, but I wasn’t getting bit.  I tried to switch things up and flipped my line in toward the boat to see if I could get on the other side of it.  I dragged my bait parallel to the structure on the inside part of it and what do you know?  I started getting bit.  It was a slow day for bass, and overall too.  The final count was only 15 sculpin and 1 sand bass caught for 11 anglers.  I caught 7 of the 15 sculpin and won the jackpot (Ryan the cook caught the bass).

Like I said before, there’s more than meets the eye to this style of fishing.  There’s so much more to share.  The best thing to do though would be to get out this last week before the opener and try some of these things for yourself.