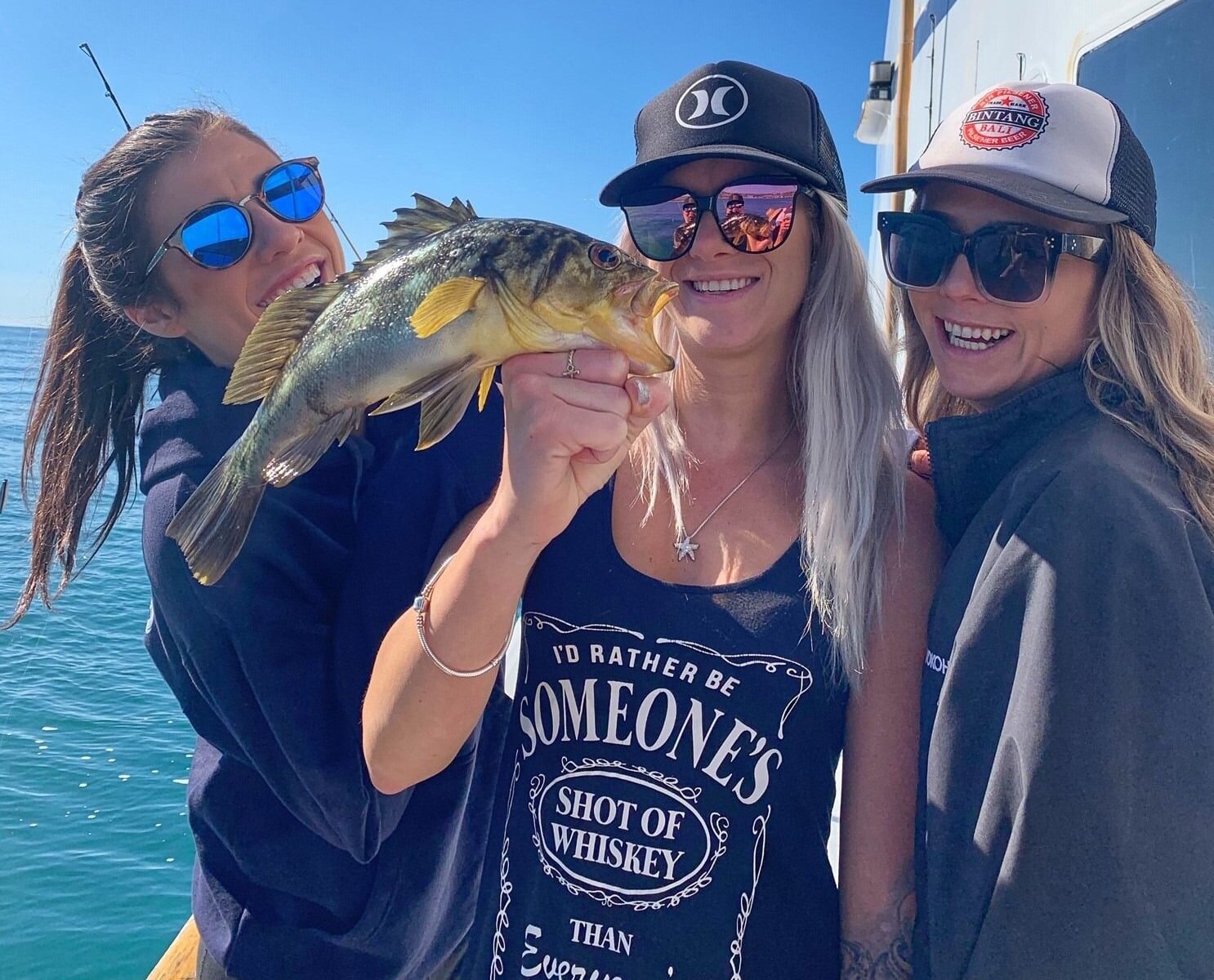 While nothing all that exciting is happening, overall it’s been a pretty good stretch of fishing for SoCal anglers. Last weekend’s full moon turned out to be a bust on the yellowtail and tuna fronts but I guess that was to be expected. The good news is that the bass bite has improved coming off the moon and there’s been steady action in multiple areas. 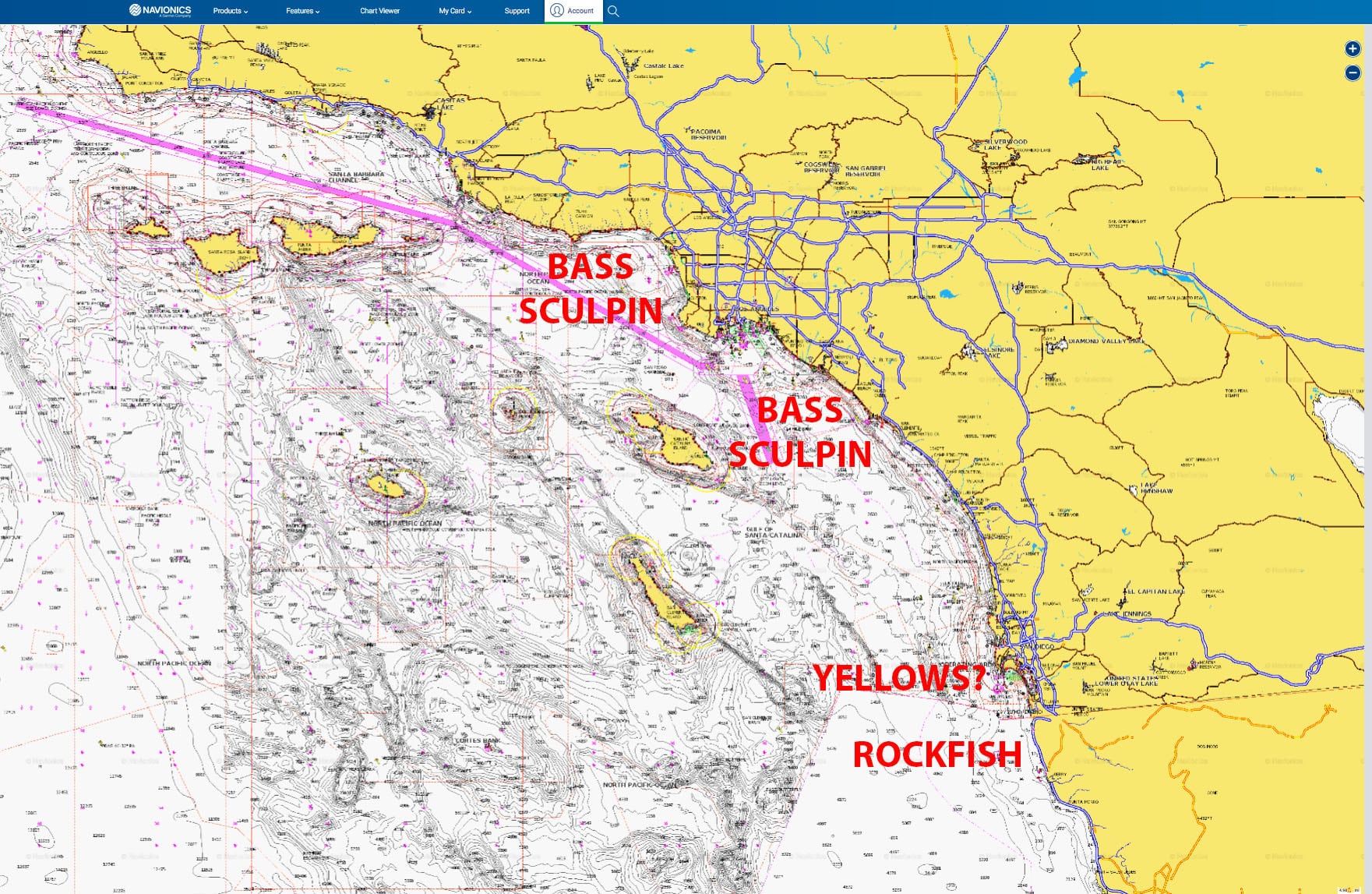 Despite looking a lot like the one from last week, bass have edged out sculpin as the highlight of this week’s Navionics Chart. I fished down in San Diego on Saturday during the SBS Tournament and while we only managed three keepers, Jimmy Decker and I caught at least 60 spotted bay bass on crankbaits. If you’ve got your own boat and are looking for something fun to do, I highly recommend going down there and taking advantage of this fishery. 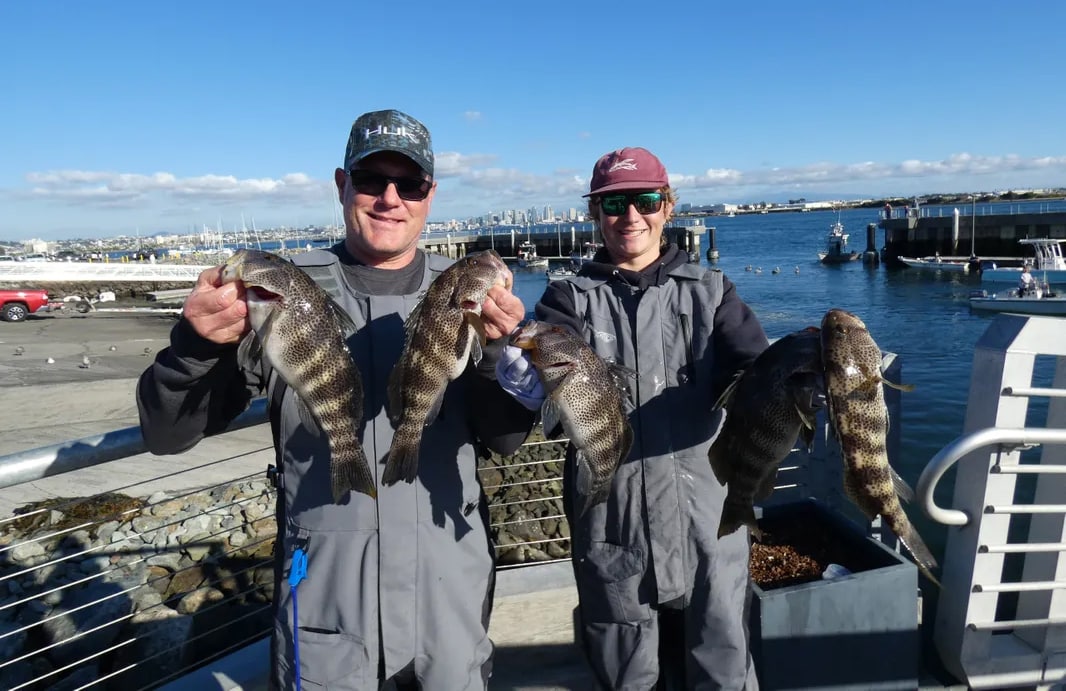 If you do head down, I recommend picking up some of the new Berkley Dredger crankbaits in the 17.5 size. Over my last three trips down there, the Rootbeer Splatterback has been the hot color, accounting for at least 200 fish. The spotties are pretty easy to locate if you look for little white and black ducks diving around mooring cans or near the shoreline. These birds are feeding on the bait that the spotties are chasing around and if you find them you can usually catch multiple fish.

In other bass fishing news, I did an afternoon trip with Matt Kotch out of Long Beach on Tuesday. We started on some of the local wrecks and rocks and had wide-open sand bass fishing in 61-degree water. After that we moved into the break wall and clobbered a mix of calicos and sand bass. The deeper water fish were biting the 8-inch MC Slug on a 1-ounce VMC Boxer Head and the fish at the wall were all over the Bladerunner 2 ½-ounce Guppy Spin as well as the same crankbait the spotties were biting in San Diego. The crankbait bite right before dark was a fish per cast for half an hour. 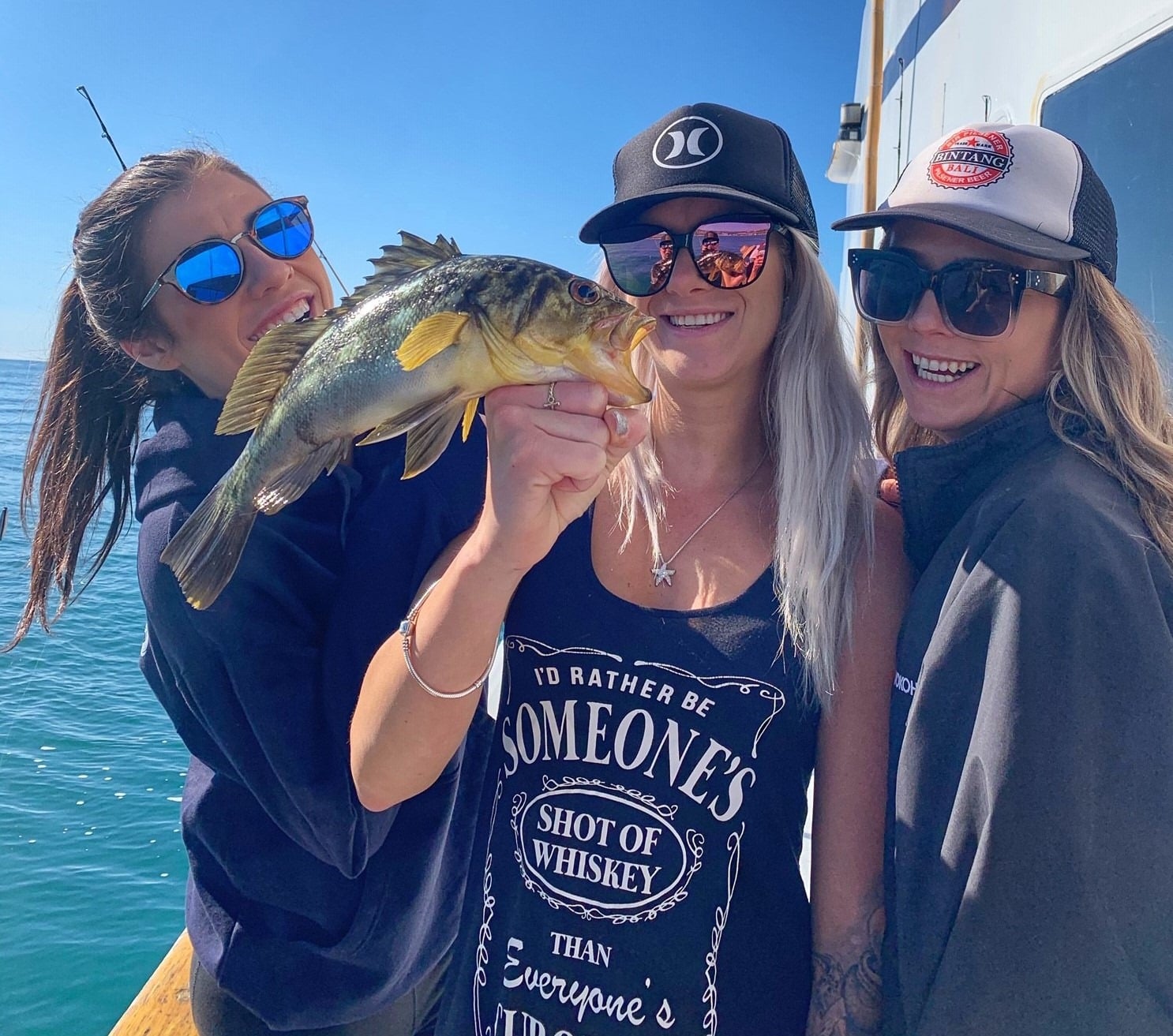 If you’re a sport boat angler, Captain Brian Wooley of the Sum Fun out of Dana Wharf Sportfishing recently shared some info that pretty much sums up what to expect. “The half day boats saw some action, both in the shallow water and out in some deeper spots. With the higher tides we had this week we got into some zones with some good calico bass action. Good for January standards anyway, in 58-59° water. Fish were caught on live sardines as well as swimbaits. We also fished sand bass and sculpin out deeper, in 90 to 120-feet of water. It’s nothing super spectacular but again decent for January.”

“Our 3/4-day trips are primarily on the sculpin program. It’s been very good this last week with fairly easy 5 fish limits on these tasty fish. The quality has been good too. The tried and true set up of the swimbait on the dropper loop fished best. The 5” MC viejos baits working great, but we’re also seeing some bruisers on the 7” viejos baits too. So if you’re coming with us it would be a good call to come with a good mix of 5”-7” rubber baits and a good mix of 5-8oz torpedos. After the sculpin thing around mid-day we’ve been sliding into the kelp or inside reefs and catching a few bass occasional triggerfish and of course sheepehad that get released.”

Down south, there are still some yellowtail occasionally being caught by private boaters fishing off San Diego, but it’s very little hit and a whole lot of miss for the most part. Sport boats out of San Diego are running ¾-day and extended ½-day trips to fish rockfish in Mexican waters which is an option for guys looking to put something other than sculpin in their freezer. 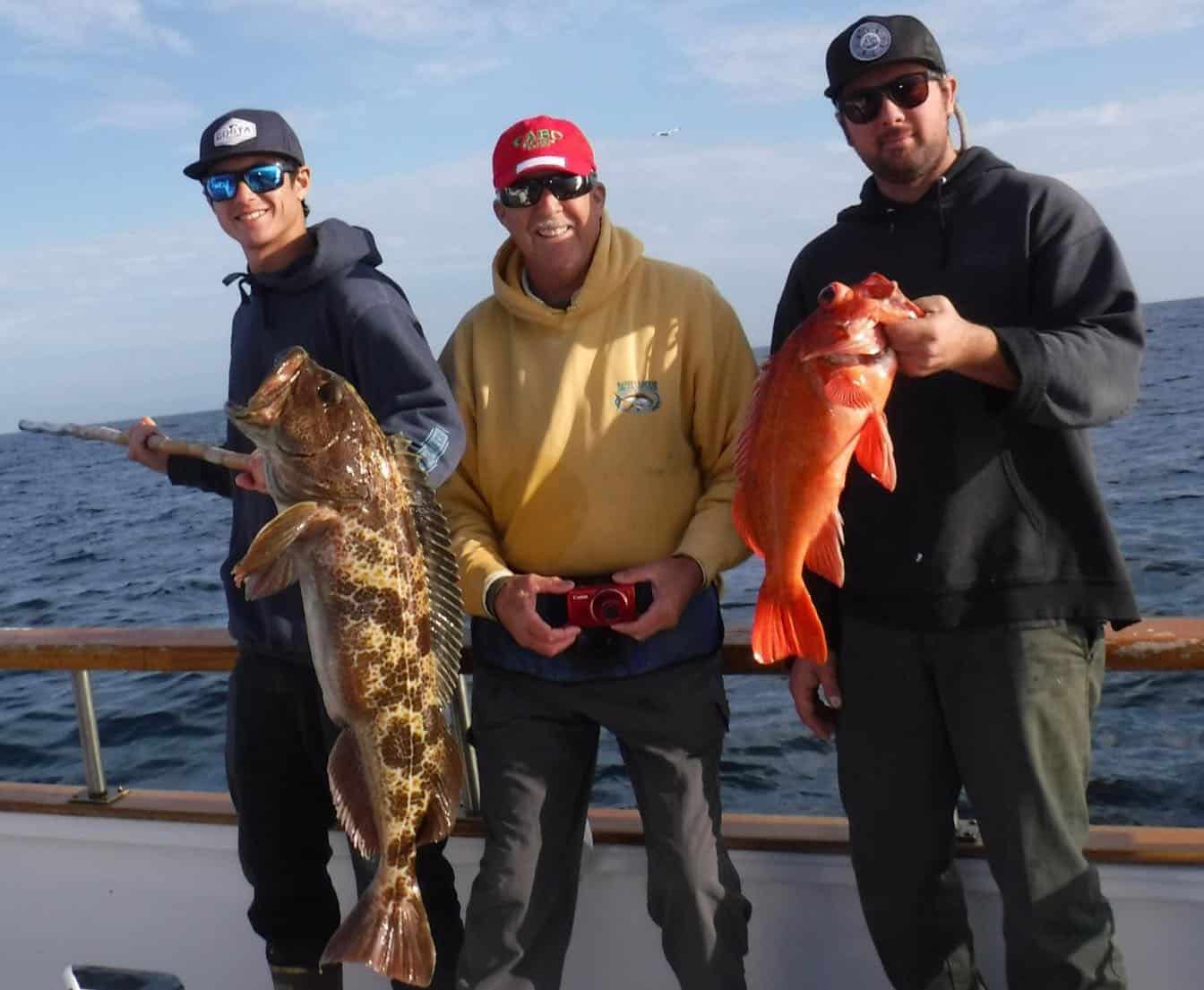 Speaking of freezers, the only 1 ½-day trip I heard about after the weekend, aboard the Relentless, was basically a freezer filler with lots of good size rockfish making it into the holds but no yellowtail. We’ve got some good weather in the forecast this weekend so I’m sure that the 1 ½-day boats will be working to relocate the yellows at Colonet and I’m still keeping my fingers crossed that someone is going to poke their nose outside and find some bluefin.