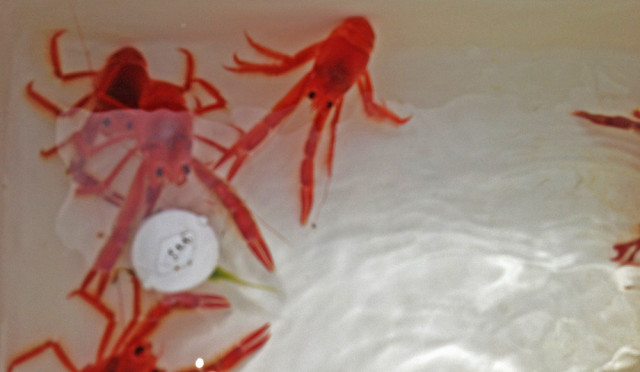 February 2014…I rode on the San Diego with a few buddies. Normal year, yellows hadn’t shown up yet. We felt like we were getting over by going rockfishing in Mexican water during the U.S. closure. I pulled up a nice red and it coughed out a red crab. “That’s a good sign” the deckhand stated. “Those are red tuna crabs.”

Pleuroncodes planipes lives on the continental shelf west of Mexico, and is unusual among members of the Galatheidae in that it lives in shallow water. It is usually found only south-west of San Diego, but in warmer years, its range may extend northwards into California.  This is usually indicative of an El Niño event.

Fast forward to this last weekend. The original plan was to get on the Pacific Islander for an outer island excursion. Here it is almost May, and I still haven’t been on my favorite rockfishing boat. That trip got cancelled. Why? Heavy winds at the outer islands. At the last minute, I was able to jump on the Island Spirit on a private charter with Jeff Cribben of Cribb’s Jigs.

I was excited to go up there and have a shot at seabass. Now, I’d get 2 shots with a second day trip on Sunday aboard the Sea Jay. The Aloha Spirit scored 6 on Th

ursday. Both weekend trips fell into that magic ghost window 3 days before and after the full moon. Should be good, right?

The ride out of Ventura Harbor and across the channel was rough. I like to think I’m pretty salty, but the wind had the ocean tossed up pretty good. Enough that I was rethinking my normal breakfast burrito routine. We got out by the Anacapa Arch and started our first drift of the day. 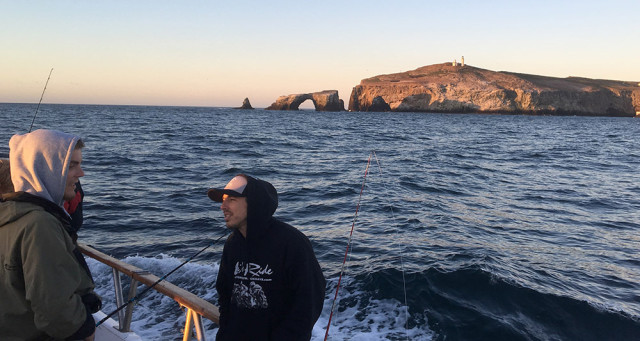 Nothing. We gave it several goes and unfortunately, each time yielded the same result. Capt. Jeff Bunde said big schools were below us. They just didn’t want to go. Deck boss Jake Holder later told me, “The ones we’ve caught were jugged full of red crab. They don’t want fin bait.”

Red crabs…two years into El Nino and their sheen has definitely worn off for me. They’re a nuisance in my mind. At one point during the trip, we were out by Yellow Banks at Santa Cruz Island. It was getting late in the day and we found a big sonar school of yellowtail. There were a bunch of seabirds sitting on the surface of the water. I was fishing on the stern and watching a seagull within casting distance. It would be our last shot of the day, so Jeff gave the command to brail bait. I watched that dang seagull almost look annoyed as beautiful anchovies rained down upon his head. Normally, the birds would be swarming on this bounty. He moved about 10 feet away and sat back down to eat red crab. Red crabs and wind are my two LEAST favorite things right now. Sunday would only be more of the same. I didn’t bother to stay for the Sea Jay trip and went home. 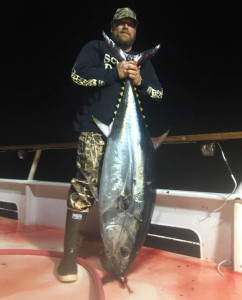 In better news, the first sportboat caught tuna of 2016 over 100 lbs. was caught over the weekend. It happened aboard Shogun Sportfishing on a 1.5 day trip.

Anglers aboard the trip reported it was a rough go. They found the schools, but they just didn’t want to go. Well it did for this lucky angler with his 115lb. bluefin.

It’s far from wide open, but opportunities are out there. All you can do is go out and temper your expectations. Sooner or later these fish are going to want to go. When it happens, it will be memorable. Good luck!