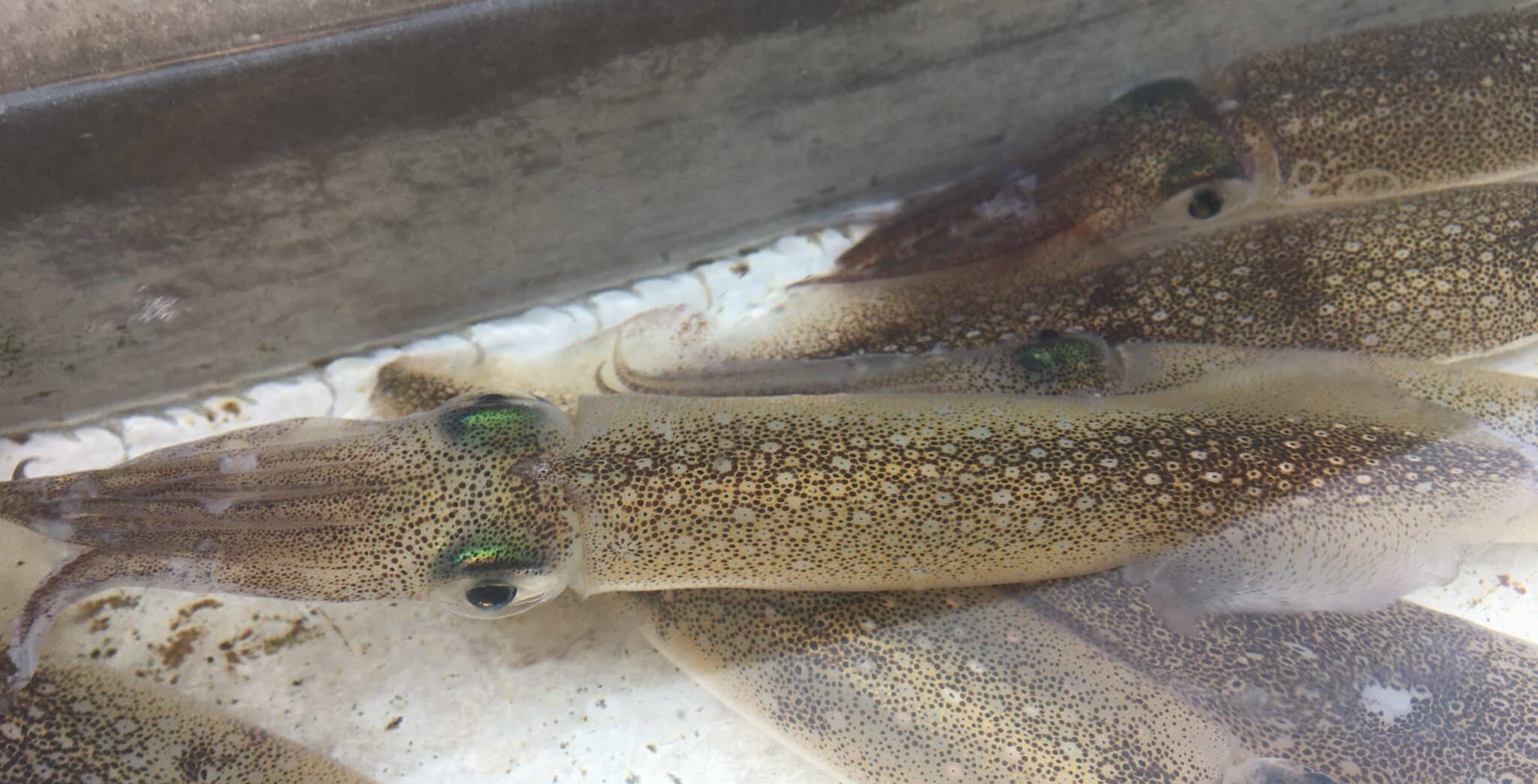 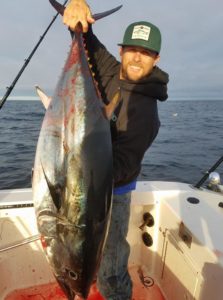 Amazingly enough, those bluefin are still around.  A couple 805 deckhands I know, Sonny Haendiges (right) and Ricky Lewis saw a weather window earlier in the week.  They took out a skiff to the Tanner and limited out by 9:30 am!

Less and less open party sportboats are going out as conditions deteriorate outside.  To be determined how things look like after this next storm.  As of this writing though, there were rides to be found if you still wanted to go.

Hopefully, all of you read my last article and chimed in so we can enjoy bluefin fishing in the USA next year.

Beyond bluefin, as we rapidly approach the end of the year and the rockfish closure, what are our best options for a little salty action?  What can we look forward to as we head into the new year?

I hadn’t fished in over 2 weeks since my Pacific Islander trip.  I had some weighty personal matters I’ve been dealing with for the last couple months and it was all coming to a head Thursday morning.  I needed some salty therapy stat!  I took a health break and headed down to Long Beach Marina Wednesday morning to ride the Enterprise with Capt. Andy Siratt.  No dice.  Not enough people to get off the dock.  Called 22nd Street, no boats going out.  MDR?  Can I make it in time?  I did and was treated to a nice day on the water aboard the New Del Mar for the morning ride with Capt. John Petrov.

They’ve had live squid for the last couple weeks that they’ve been making inside Santa Monica Bay.  I’m not going to say where, but you can refer to Fishdope or go and follow the light boats if you want to get your own.  Actually buying it from the MDR bait dock is an option too. 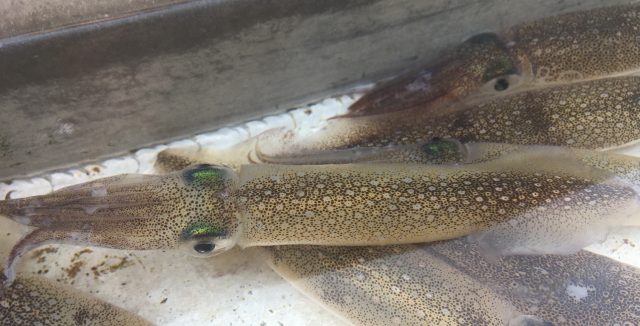 You know what they say, anytime you have live squid, good things can happen.

The crew and other anglers have been telling me about some big sandbass and an unusual number of sheephead (aka #thatdamnfish ).  We didn’t see any of that on Wednesday, but there were a fair number of legal lings (I came up short twice) and some legit reds to show for the effort.  Crazy Jacob from the MDR bait dock even scored a big soupfin shark which provided a lot of entertainment for the rest of us on the boat. 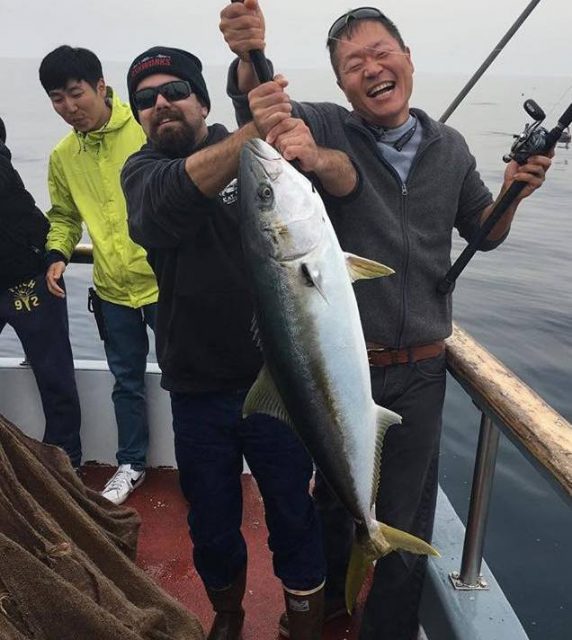 On Wednesday, it was greasy calm on the water.  Almost too nice…we barely drifted.

This weekend, it’s supposed to be cold, but fishy.  One of the MDR boats even caught a yellow this week!   Overall, I like the opportunity there in Santa Monica Bay.  I’ll be riding the ¾-day boat, the Spitfire on Sunday if anyone is inclined to come out.

If you aren’t close to Los Angeles, The Gent out of CISCO’s has been getting out consistently.  So has the New Seaforth out of Seaforth.  Both boats have been posting solid rockfish counts.  The Aloha Spirit is doing their Monday shallow water ling cod trips again.  They did well this week.  If you can swing a Monday, I love that option.

Are You Ready For Colonet? 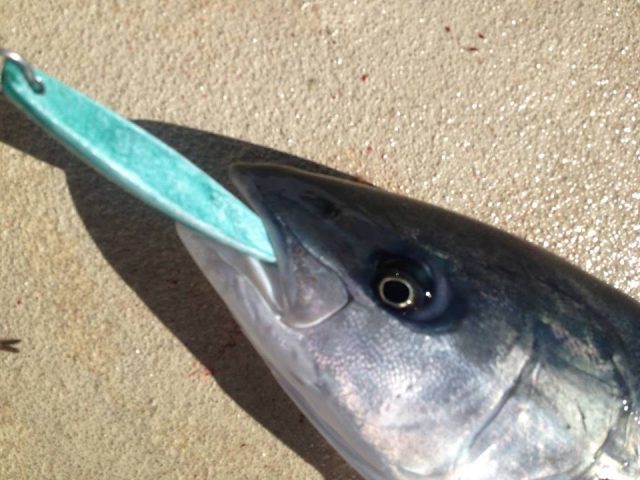 There will be some boats starting up this month.  In January and February though, heading down to fish the Mexican coast is probably going to be main game in town.  My January 20th 1.5-day trip on the Pacific Queen is already sold out, but lots of boats will be doing this trip.  The Queen has other trips and some other boats to look into are the Eclipse, Tribute, and Chief for Colonet trips.

What you can do now to prepare is secure some heavy sinkers…up to 2-pounds!  Put some small zip ties in your bag too in case you need to daisy chain a couple torpedo weights to make it work.  Have reels filled with 65 or 80# braid.

And make sure you have some heavy jigs! 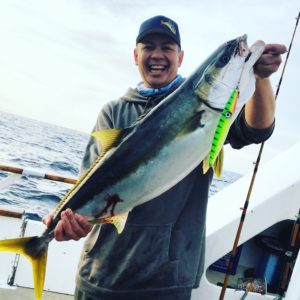 The mint/white Salas 7x heavy and the mint with the fish scale belly Tady 45’s should be a staple in your bag.  I did well last year using the 300 gram Rudo Firetiger from Jimyjigs.  The extra weight was a major plus when the current was heavy.  You will also need a passport (or at least the card), so get it done already.

I hope I see some of you out this weekend.  Good luck if you get out there!