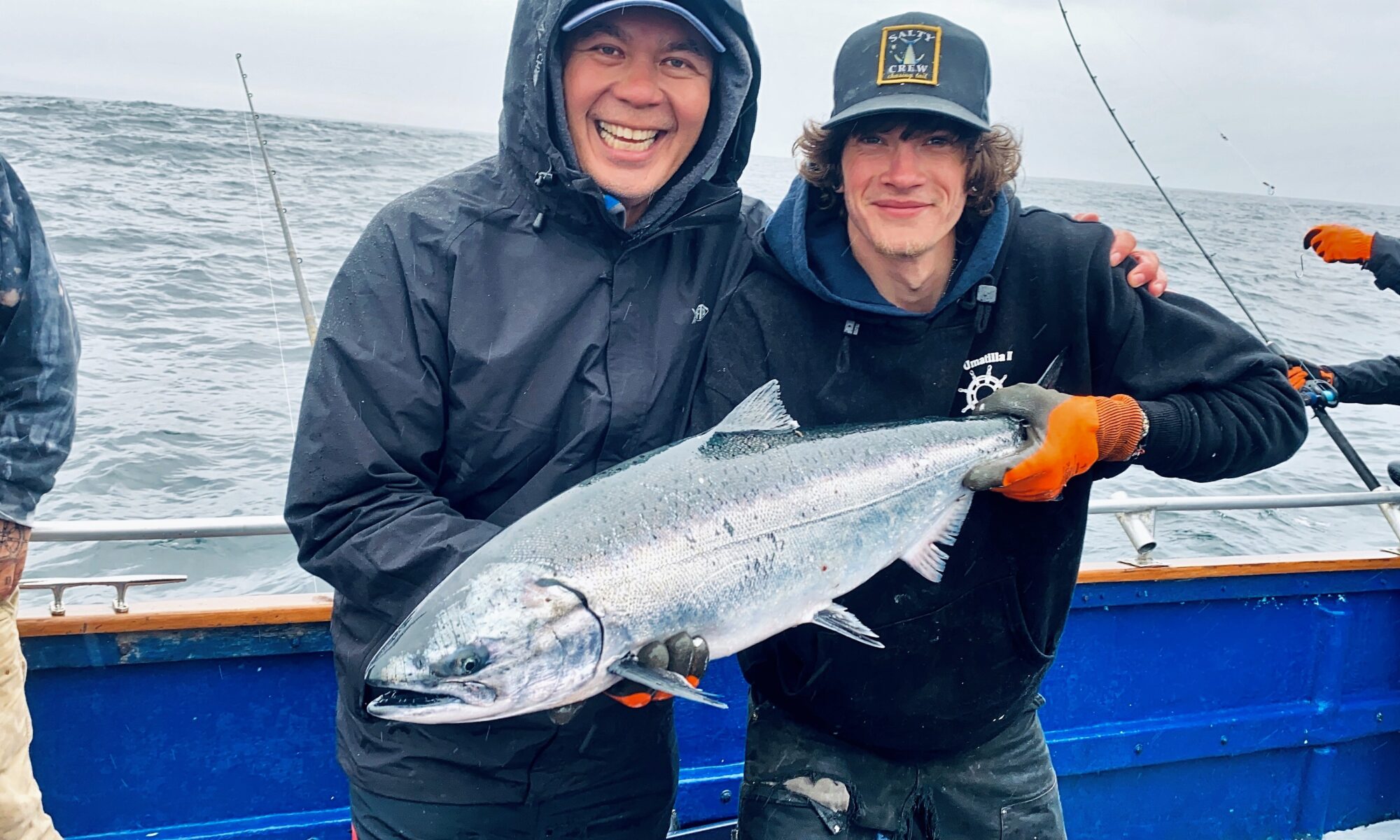 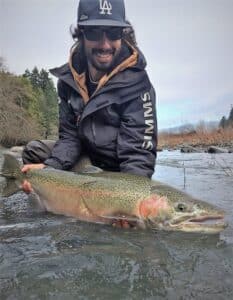 Wednesday morning (March 11th), I was getting ready to move on from Eureka.  The previous day, I smashed the black rockfish at South Jetty.  I considered the idea of giving it a quick go before moving on.  A guy I met on the South Jetty pointed to the other side and said he’s caught the most of his legal lings at the inside corner of the jetty closest to the Bay.  Hmmm, maybe give the other side a try?  I was having breakfast when I got a text from Mark Aviles (left).

You remember Mark.  He was Frenchy’s fishing buddy and still lived there in Eureka.  Mark let me know that his buddy caught 4 steelhead in his spot yesterday.  He was planning on going that morning.

Mark texted me the address of the hatchery on the Mad River in Arcata, CA.  He directed me to pick up my steelhead tag at a store named Murphy’s and meet him at the river.

Other than a glitch with the license machine at Murphy’s, I found the spot Mark described without too much trouble.  Remember how I was saying in the last post how the Trifecta rods were originally designed for fishing steelhead?  I texted Mark what rods I had when I got there and he directed me to bring the 9’6″ spinning rod down to the river.  He had all the terminal tackle I would need.  He did emphasize to bring some polarized sunglasses if I had them.  I was happy to have the right gear with the Trifecta rod and my Costa Sunglasses.

It was a different day than yesterday at the jetty.  It was overcast and a bit foggy when I arrived at the river.  Mark started out setting me up for a presentation called “flossing.”  He slid a clip swivel on my mainline and squeezed a 1/4 ounce split-shot weight onto the clip.  The weighted clip swivel sat behind a bead on the mainline that was tied off to a barrel swivel.  From the barrel swivel, he tied a 2-foot leader of 15# fluoro, that terminated to a salmon egg looking bead and a 2/0 barbless hook.  He told me to cast out at about a 45-degree angle upstream and then follow the drift downriver with my tip so that I was ready to swing if I got bit.  The river was moving fairly slowly, so the drift wasn’t too fast.  Once I got acclimated to the presentation, I was better able to take in my surroundings and started recognizing where fish were holding in the river.  It was better when I found a rock to stand up on and could look down into the water from a steeper angle.

Wow!  There’s a lot of fish around!

It reminded me in a way of standing high on the bow of a party boat and sight throwing surface iron at yellowtail.  That visual aspect of this style of fishing was addicting.  Every look, every follow by one of these fish, kept me going to cast again and again.  Before I knew it, I’d been doing it for 3 hours.  I got bumped a couple of times, but no strong take.  There were a handful of other anglers in the same space on either side of the small section of the river we were fishing.  I saw a couple of fish get landed.  I could see the fish stacked up in the deeper, slower sections of the river.  Despite the lack of bites, it was hard to turn away. 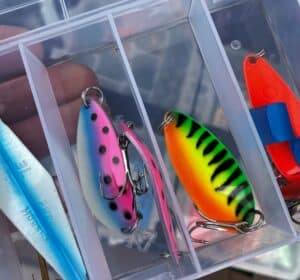 In a last-ditch effort, Mark told me to try a Little Cleo spoon he had in a rainbow trout pattern (left).  Now I really felt like I was throwing iron…just on a smaller scale.  I was throwing directly at fish.  Mark told me that this far upriver, they were in a spawning phase and more than anything, one might strike at the lure as more of a defensive move than actually wanting to eat it.  The clock was ticking, so I gave myself 20 casts to try and piss one off enough to strike at the lure.  I threw as close to their faces as I could.

I was about a dozen casts into it when I got the reaction I wanted.  SMASH!  The rod loaded up and I could feel the weight of the fish.  Despite the barbless hook, it felt like I had a strong connection.  I just wanted to keep the pressure on and withstand the initial fury of the fight.  The fish took a big jump and I caught a full broadside view of it.  Big chromer!  When it re-entered the water, the lure popped out and came flying back at me landing harmlessly on the bank.  Dang it!  I was disappointed, but the thrill was worth the effort.  It was after 1 pm at this point.  I really needed to go.  I thanked Mark for the hospitality and returned to my car.

I had a few hours of sunlight and just wanted to cover as much road as possible before settling in for the night.  The last time did my road trip, I found a city just on the Oregon side of the Washington/Oregon border.  It was called Pacific City.  In Pacific City, they do an interesting style of fishing where they launch what they call “dory boats” right off the beach.  I figured if nothing else, it would provide some good pictures.  At best, I might get a shot at catching a truly large lingcod.  I reached out to a few of the outfits up there while I was in Eureka.  By the time I left Mark, some had gotten back to me.  The news wasn’t good.  The best response was from one boat that was planning to go out Monday and/or Tuesday.  I didn’t want to hang around that long and figured I’d just get to Seattle sooner than later. 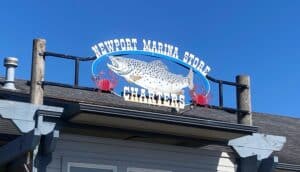 I stopped in Coos Bay for the night.  The next morning, I pressed on northward.  I only had some toast and coffee in the morning, so by lunchtime, I was needing to stop and eat.  I found myself in a city called Newport, Oregon.  I found the Rogue Brewery and figured I’d stop to eat there.  Nearby I saw what looked to be a sportfishing landing, Newport Marina Store and Charters.  I stopped in before lunch.  Inside I met a lady, Krista Schulze, working behind the counter.  I asked Krista what kind of fishing opportunities they had here.  She told me that tomorrow she was taking the day off to fish on their offshore ling trip.  Typically, they fish a little closer to home, but these offshore trips have yielded some truly impressive fish…up to 45-pounds!  My personal best ling is a 17-pound fish that I caught on a trap-rigged barber pole (flag rockfish) in Colonet several years back.

A chance to break that 20-pound mark, maybe bigger?  I’m in! 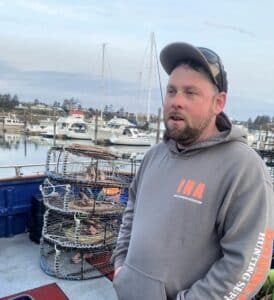 I was instructed to show up the next morning (Friday, Match 13th) at 7:30.  On top of the cost of the 8 hour trip, for an extra $20 you could buy into the crabbing portion.  I took the upgrade.  They printed me out a day license and I left to board the boat.  The trip was led by Capt. Jeremy Freitag (left).  Owner Brad Gnuschke worked the deck with his son, Jared.  Jeremy instructed us that we would be fishing in about 150-feet of water.  Rod rental came with the fare, but I opted to use my own gear, a Shimano Teramar 86XH paired with a Tranx 500 PG.  I saw that Jared was rigging up the boat rods with 12 ounces of weight, so I used a 12-ounce glow squid jig from Lingcodjigs.com and put a 3-inch motor oil grub on a loop about 12 inches above it.

Just outside the harbor, we dropped eight baited crab traps and continued on.  It was about an hour and a half before we arrived in the fishing zone.  A light drizzle had started.  Fishing in the Pacific Northwest!

On the first drift, I hooked into a canary rockfish.  We recently started being able to keep canaries in SoCal but limited to 1 of the 10 rockfish bag limit.  I discovered up here they are pretty common and you could fill your whole 5 fish limit with them if it turned out that way.

My next drop down, I got a big hit.  The Teramar is a pretty stout rod (rated 40-60#), but it was bent!  I could feel violent head shakes.  Oh yeah, it was the right kind.  Slow and steady wind and I might just have my 20-pounder.  I was in the port stern corner and I was pretty much straight up and down.  As I got it closer to the surface though, I found that my line was heading towards my left…the opposite side of the boat.  Krista’s boyfriend Scott was next to me and we had to do the dance so I could get around him to follow my line.  Now that I could see it, I could see it wasn’t a ling.  It was silver!  It took a run back to my right where Jared was waiting with a net. 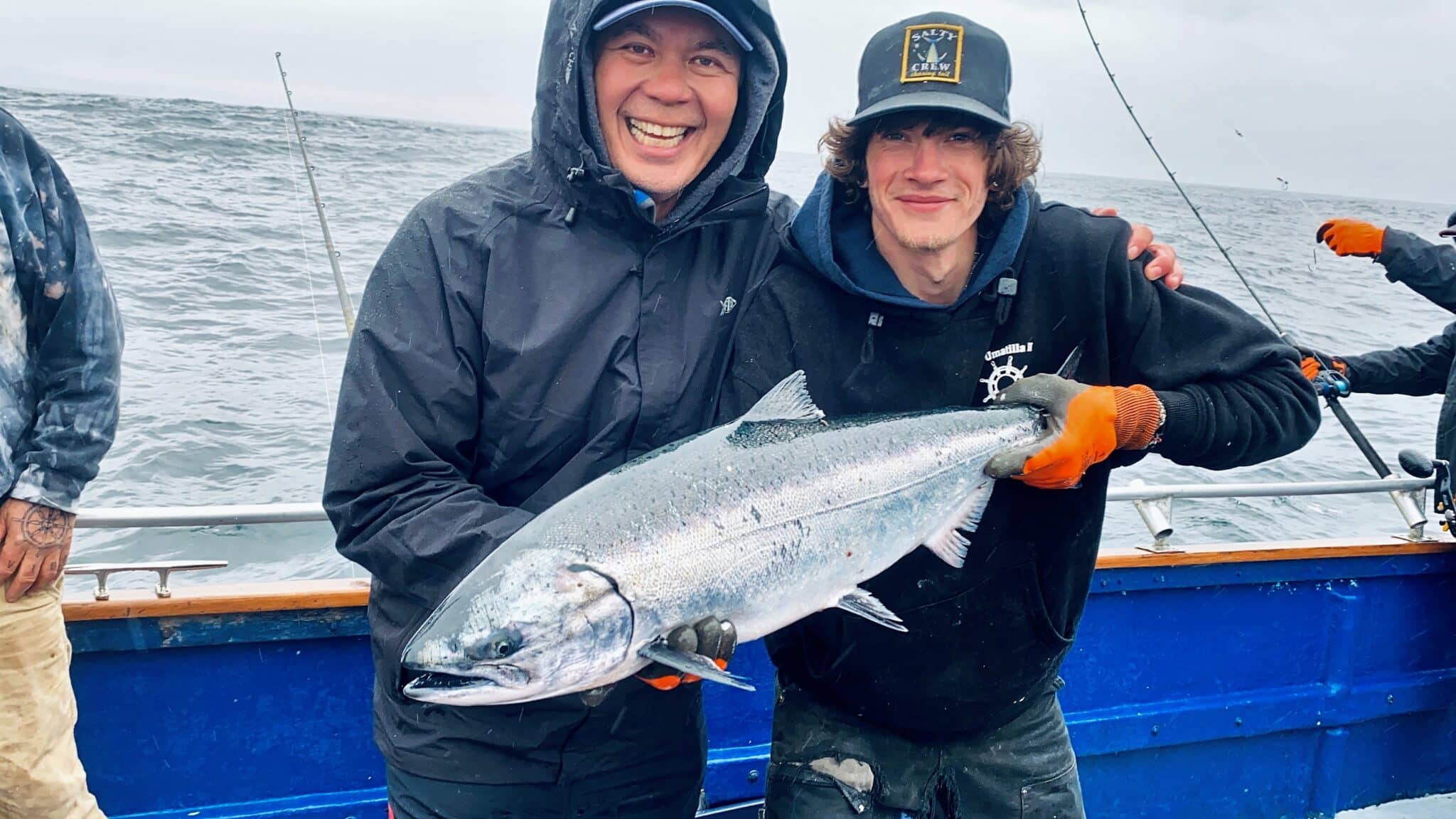 It wasn’t a ling…it was a chinook salmon!

It didn’t bite the jig.  It bit the motor oil grub I had on the upper hook.  That doesn’t happen every day.  Krista told me it was kind of unusual for them too.  They don’t typically catch a bunch of salmon at this landing and this one compared favorably size-wise with any fish they had caught last season.  Unfortunately for me, I couldn’t keep it.  A) it wasn’t a barbless hook, and B) the chinook season didn’t open until Sunday.  Damn. 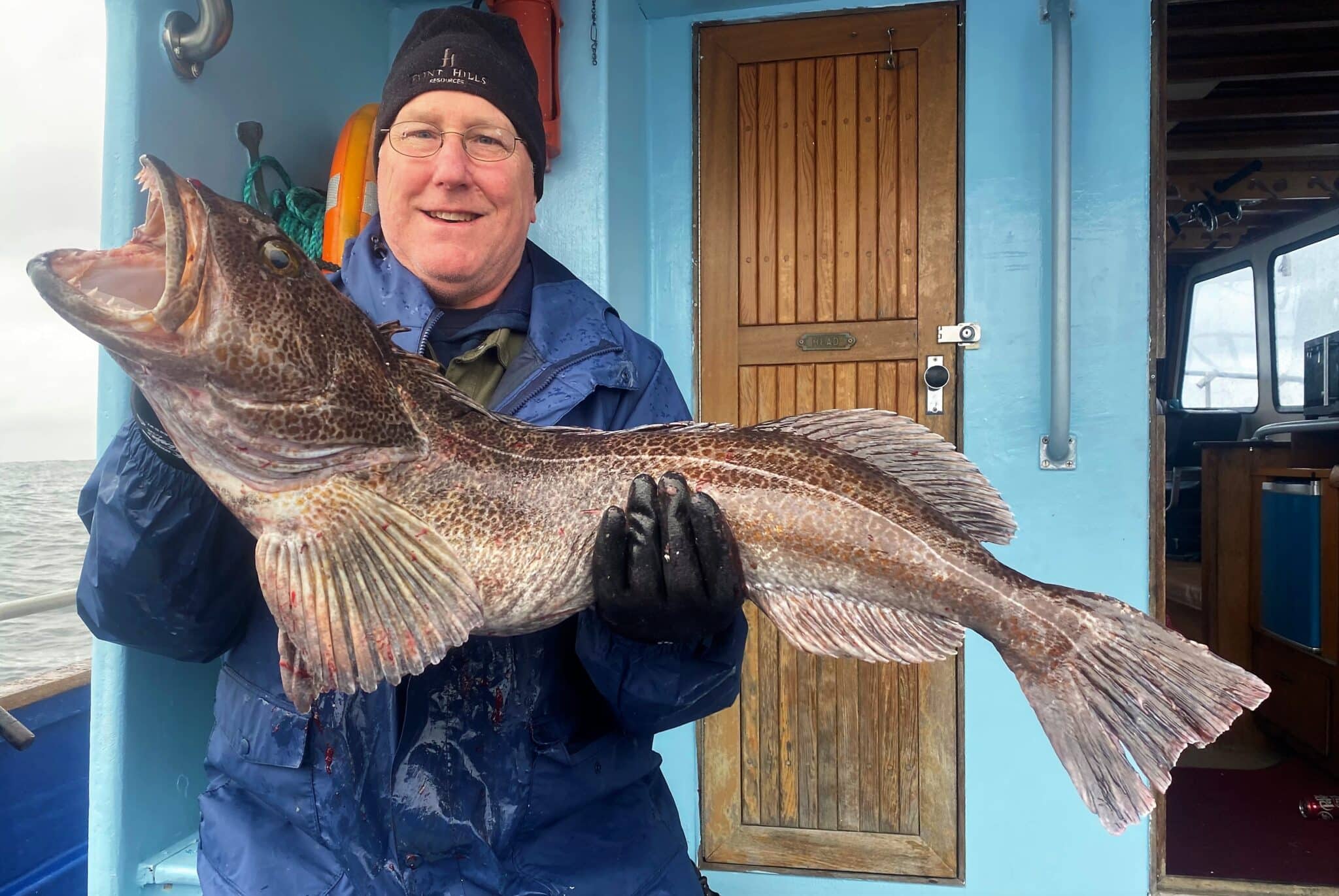 It ended up being the highlight of my fishing day.  I caught some lings, but nothing that impressive.  Angler Gerry McDonald got the big ling for the day.  Nice fish.  Looked like it might have been just north of 20-pounds.  My final fish of the day was a quillback rockfish, an exotic for me.  Lines up.  Time to go.  But that wasn’t the end of the trip.  On the way home, we still needed to pick up the crab traps.  Only half of the anglers on board bought into the crab upgrade.  I’d be splitting the take with only 3 other anglers.  That share ended up being 7 healthy Dungeness crabs, a tasty topper to a good day of fishing.

Despite not getting to keep the salmon, it was a super fun day.  Thanks to Krista for talking me into going, and thanks to Capt. Jeremy, Brad, and Jared for taking good care of us and putting us on fish (and crab)!  They tell me that they get Pacific halibut here, so I’m already looking forward to when I can return.