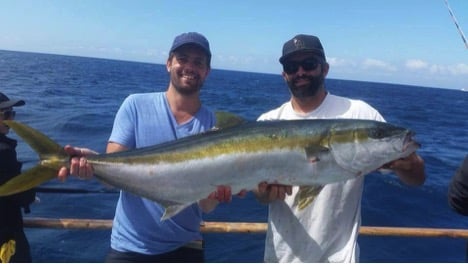 The weekend’s action remained hot. Excellent opportunities abound, even on a local level, up and down the coast. It’s just this side of wide open, but you will have your opportunities. Let’s get to it! The big headline is that after one of the more amazing runs I have ever seen, one where the San Diego was averaging about 200 yellowtails a day for roughly 2 weeks, has ended. Conditions have changed at the islands. Effective immediately, the San Diego will now be joining the Malihini running offshore. The Mission Belle will probably follow suit before too long.

The good news is that offshore fishing is viable within ¾-day range. In fact, it’s viable at half-day range! The New Seaforth, half-day boat out of Seaforth Sportfishing has been finding a handful of tuna when they’ve looked outside. To have that kind of opportunity on a half-day boat is rare stuff. Speaking of tuna on half-day trips, there is a nice patch of 70-plus degree water just off the beach from Dana Point. My buddy Jimmy Bass took advantage of the opportunity and scored aboard the Reel Fun at Dana Wharf Sportfishing last week. Further offshore, we’re seeing some big scores start to happen. The Ocean Odyssey returned from a 1.5-day trip on Sunday with LIMITS of BOTH yellowfin and yellowtail for 28 anglers. Captain Rick Scott found a big gash of yellowtail early and then ran into a huge school of yellowfin where they loaded the boat. After that hit, they rounded out their sacks to reach their limit of yellowtail. Angler John Beaman (shown here) was one of the lucky 28 to enjoy this ride.

If yellowtail is what you are looking for, Catalina Island is your place. The ¾-day boats out of the LA landings are finding them along the front side and they are on light line and fin bait. Typical deal, biting well during the week and then down with the traffic on the weekend. If you can swing the time, a better bet though is an overnight boat that has time to get to the backside where it’s more of a squid-based bite. The schools are a mixed grade, but the consistently bigger fish are on the overnight boats. The Thunderbird is again leading the charge. Capt. Jeffrey Markland had a 178 tail day on Friday and a big 203 yellowtail day on Sunday to cap off the weekend.

It’s good people. Get out and fish.