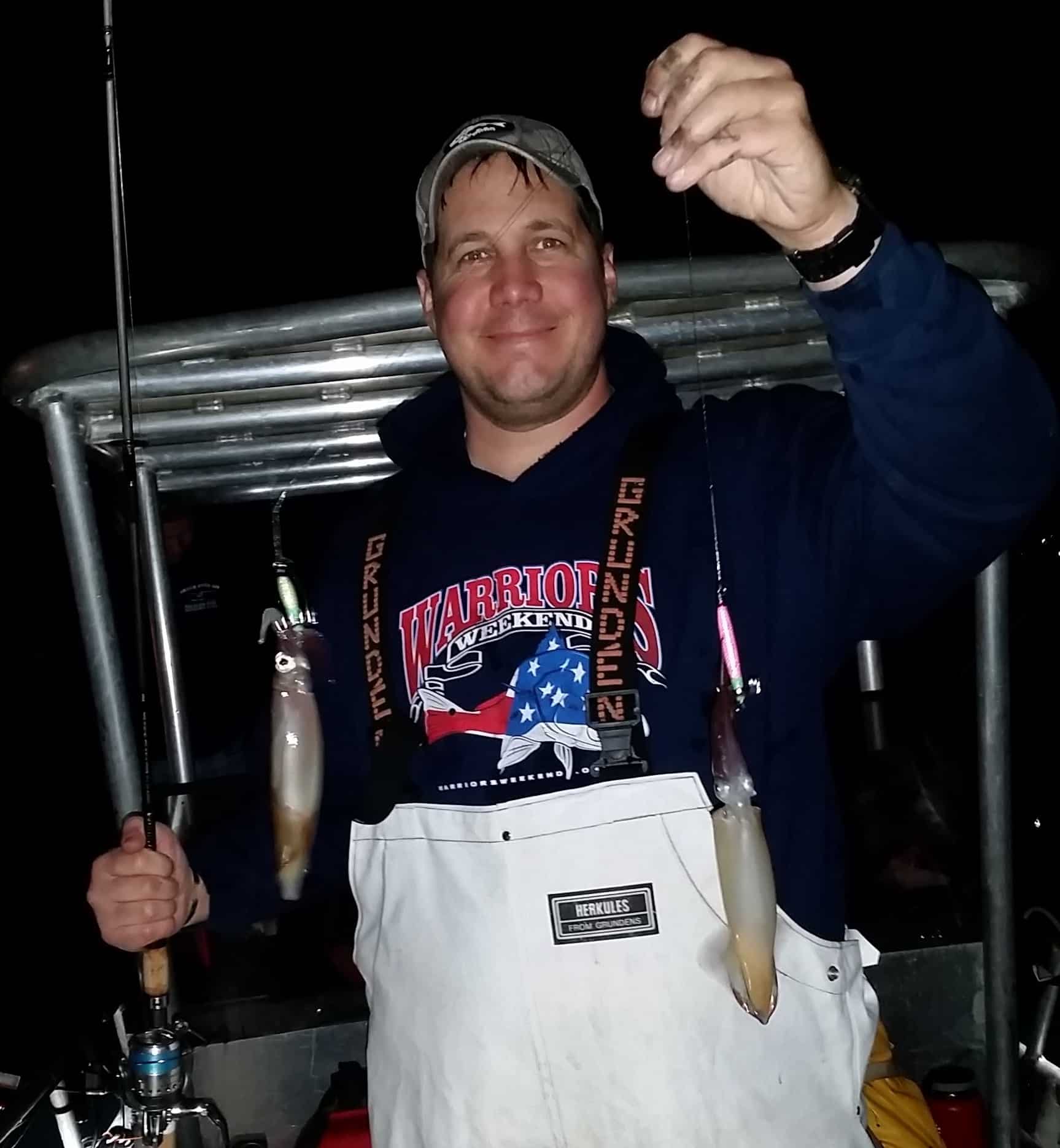 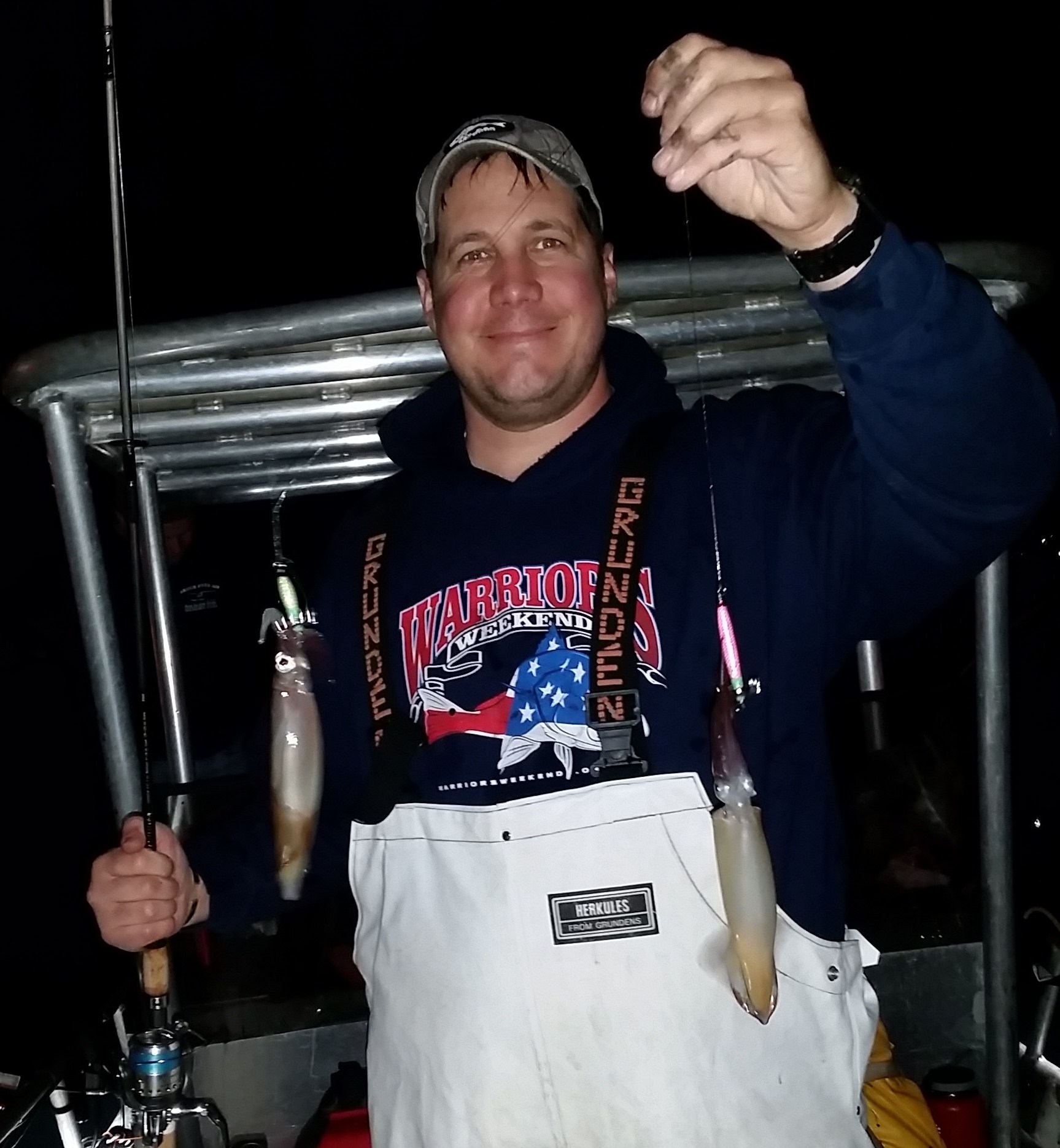 The ocean weather may be taking a turn for the worse and the tuna beginning their journey south, but there is no shortage of saltwater opportunities in the Pacific Northwest. The first thing that comes to mind is the winter dungeness crab fishery in the Puget Sound, and that is in full swing with great results. However, there is another option that is a little less advertised but just as tantalizing: SQUID!

Record numbers of squid have flooded the Puget Sound and anglers are filling their buckets in short order.

It’s your choice: boat or pier. I enjoy hitting this fishery from a boat, as you can get away from the crowds and be the single light source in an area. If you’re going to venture out on your own boat, you need to create light. To do that, use 4-6 flood lights and the more light the better. We have been using 2000 Lumen LED flood lights to brighten up the sea. Just mount them to sides of the boat, hook them up to a 2Kw generator and fire it up! You’ll want to anchor in 30 to 70-feet of water in an area that does not have strong current. You’ll also want to address the rain factor by choosing an area that is not susceptible to large amounts of run-off. Squid don’t like water with reduced salinity and remember that they need to be able to see your lights. 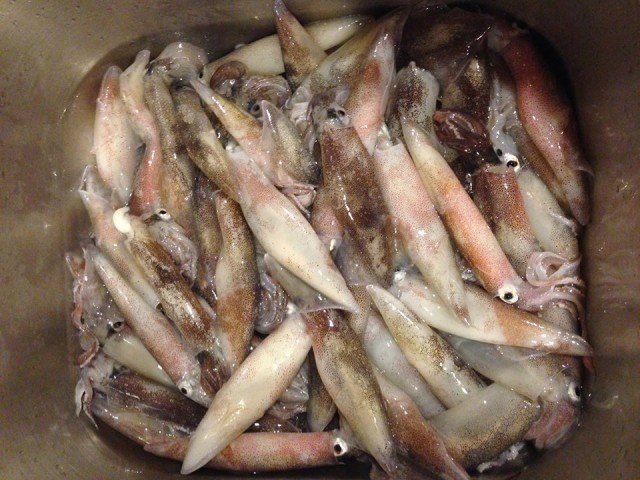 If you’re going to hit it from a pier, there are many options depending on where you live and where the hot reports have been. Lately, downtown Seattle, Alki, Redondo, Les Davis, and Bremerton have been pumping out large numbers of squid. Here is a list of piers to help narrow down your search: http://wdfw.wa.gov/fishing/piers/. There is nothing like a fresh report, so stay tuned into the Washington Forum of BD Outdoors for the latest squid dope! http://www.bdoutdoors.com/forums/forum/washington-state/

Now for the tackle, and this is the easy part. Any light tackle rod will work and I prefer a 6-foot Graphite 6-12-pound rig. You can have some fun here, and we have even used ice fishing rods for the hell of it! Small bait casters or spinning reels filled with 10-pound. monofilament work great. The important parts of the equation are the jigs, and are an area where some anglers make mistakes.   There is a specific type of jig made for Loligo opalescens (market squid) here in the Pacific Northwest that you will want to buy. There are many manufacturers and makers of squid jigs. One brand that we have had great success with is Squid Candy, carried by Defiance Marine in Port Orchard, WA. You want to pick a jig that has a glow body and has a 360 degree array of wide hooks on the bottom. When picking a jig, smaller is better and you will want to avoid some of the large box manufacturer jigs. Although the regulations allow you to have up to 4 jigs per line, I prefer to place two jigs in tandem with the larger, heavier jig on the bottom and a smaller lighter jig on top. Jigs should be placed about 2-feet apart. The best colors have been greens, pinks, and whites. The highliner rig has been a Green Squid Candy Fat Boy (3/8” x 1.5”, ¼ oz.) jig on top with a Pink Squid Candy Fire Fly (1/4” x 2”, ½ oz.) jig on the bottom. The multi-color jigs have also been doing a fair amount of damage. 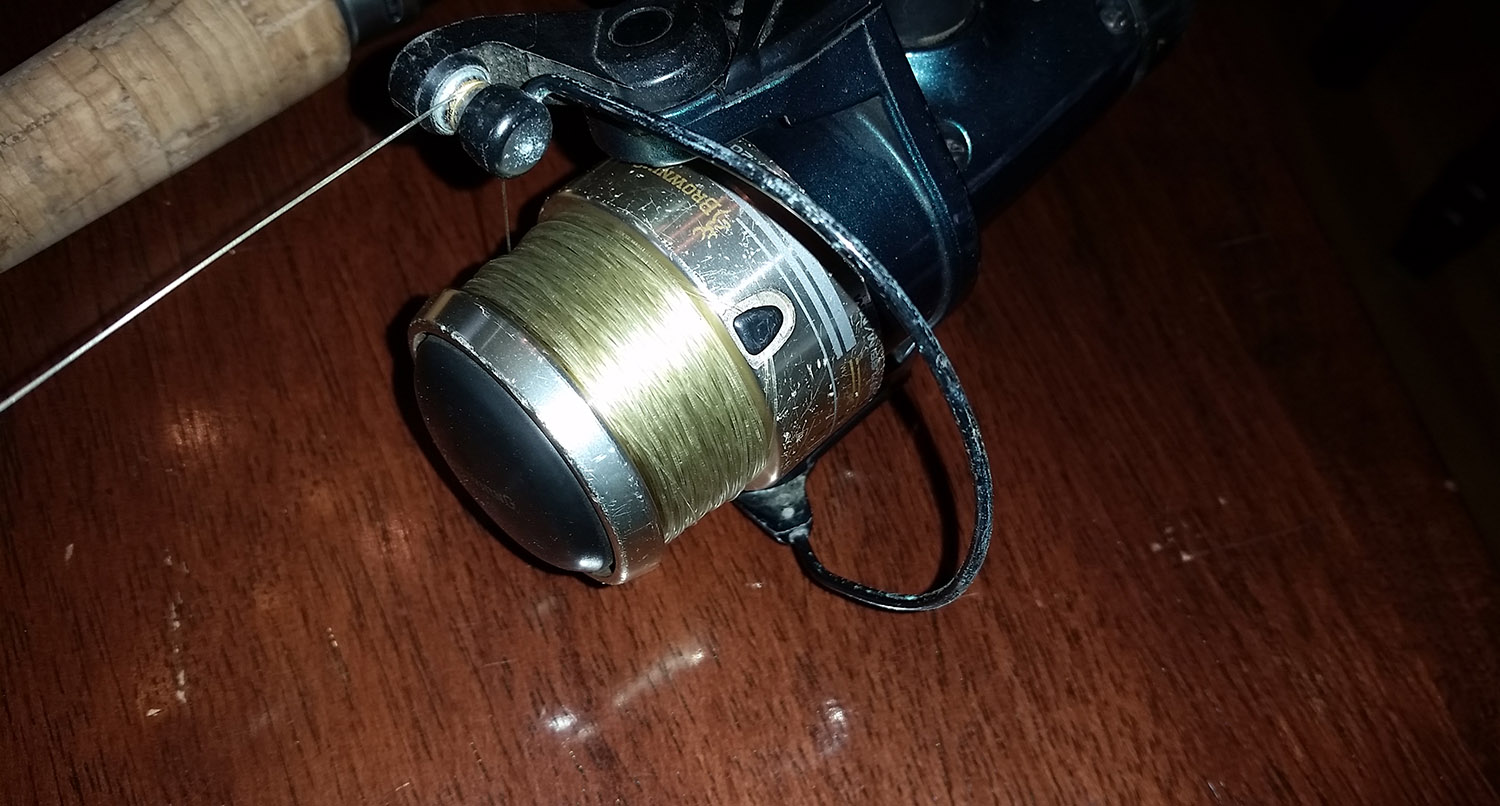 Now you’re ready to deploy your jigs in search of these tasty cephalopods. Here’s a trick that will help prevent you from losing your jigs on the bottom: most small spinning reels have a line clip on the spool. You will want to drop your jig to the bottom, take a few cranks to bring the jigs off the bottom, and then clip your line into the spool. This will allow you to cast away from the pier or boat and prevent you from losing your newly acquired jigs. Before night fall, most of the squid can be found near the bottom so that’s where you should be squidding until the lights go out. After dark, the squid will key in on your lights and start rising in the water column.

A few nights ago, they were so thick underneath the boat that you could drop your jigs 5 to 10-feet down and watch them attack the jigs.

I would watch until 2 or 3 squid were pinned to the jigs and then bring them up to be dropped in the bucket.

Yes, it is THAT GOOD right now! For jig action, you’ll want a quick upswing and then let the jigs freefall. When you have the attention of the masses, it only takes a couple of jig swings to have 1 to 3 squid on your line.

For some squid talk, tune into 710AM ESPN (the Outdoor Line) and listen to the latest podcast where Tom Nelson, Rob Endsley and myself discussed the ins and outs of this fishery: http://theoutdoorline.com/podcasts/ (Podcast – October 31, 2015 – Weldcraft Wheelhouse: Tommy Donlin of BloodyDecks.com)

And don’t forget to check out this recipe for Calamari. You won’t regret it! http://www.bdoutdoors.com/sausage-stuffed-calamari-recipe/