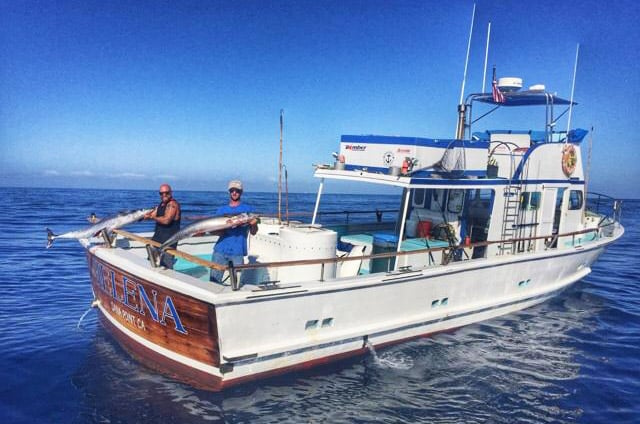 So just how weird is this year getting? Well on Saturday afternoon I was on a boat fishing within a mile of Anacapa Island and we had a striped marlin hooked up.

Four more marlin were milling around the boat looking for mackerel to eat. Not weird enough? How about the Helena leaving Dana Point this morning to avoid the potential tsunami surge and coming back with two jumbo wahoo? Or what about BD member Travis (Slice of Life) who hooked and landed a blue and striped marlin 20 miles out of San Diego over the weekend? Yup, things are definitely getting weird.

At this point, I’d be lying if I said that I had any idea of what might be coming next. But I can tell you what bit this week and hopefully point you in the right direction for the weekend. Starting down south, there is a lot of small yellowfin and skipjack in Mexican waters and up through Orange County. There are some patches of bigger fish to be caught, but with that much small fish around you have to get pretty lucky to find them. There is also quite a bit of dorado in the mix as well as a scattering of wahoo and maybe even a few more blue marlin.

If you’re planning on targeting these tuna, it’s important to bring some tackle that will fish an anchovy as the sardines have been scarce on some days. If you’re unsure of what tackle is right for fishing anchovy baits, I recommend this article. If nothing else, the lighter tackle will make for some fun fishing on these smaller tuna. There are some larger bluefin still being caught on the offshore banks between the border and San Clemente Island, but it’s not easy fishing. The guys that are catching these fish are putting in a lot of work and using specialized techniques like the kites and trolling with a downrigger to get bit. If you don’t already have some inside info regarding exactly where to go and what to do, I wouldn’t even bother trying.

For those wanting a shot at non-football sized tuna, I’d recommend looking farther north. The overnight boats fishing Santa Barbara Island have been getting some scores of 20 to 30-pound bluefin tuna and have been catching yellowtail as well. With the warm water stretching up past Santa Cruz island, there’s no reason that there shouldn’t be more fish to be caught off Ventura County.

On the inshore front, the yellowtail bite is scattered along the coast from San Diego to Santa Barbara and all of the islands are kicking out fish. Pete Wolf, owner of Big Hammer Swimbaits, fished with h is son Pierce with Captain Nick Tharp of El Tiburon Charters over the weekend and scored multiple yellows along the coast of Ventura.

If you’re looking for something different, the calico bass bite is about as good as it gets in multiple areas along the coast. John and Travis Curry fished Palos Verdes on Saturday and reported “absolutely stupid” bass fishing with lots of big fish. John mentioned that the Shimano Wax Wing fished on the outside kelp stringers was the hot bait.