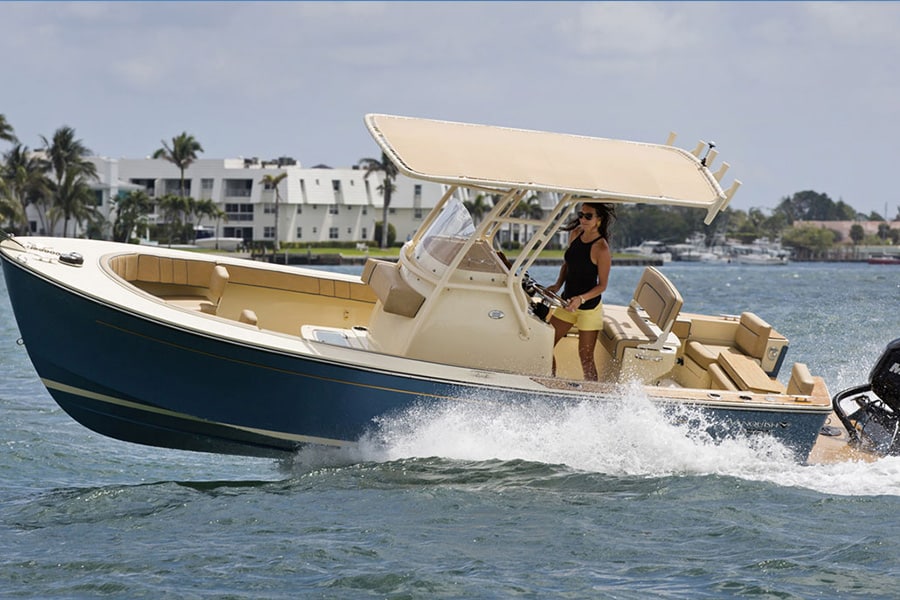 The Vanquish 23 BHS proves that one can practice piscatorial pursuits with panache.

Sure, everyone likes to make their boat as up-scale as possible by adding stuff like SeaDek, getting a new set of clear canvass, or maybe even bolting a Seakeeper beneath the deck. But some boats are simply born dripping with class, no additions necessary. Case in point: the Vanquish 23 BHS.

If the lines of this boat don’t bring out the gentleman in you, nothing will. And if you agree that the boat has rather Bristol-perfect eye-appeal note that it’s no accident. In fact, the boat was designed by the Bristol Harbor Group. And while Vanquish hasn’t focused on fishing boats in the past, their entire line-up has that blueblood look.

Okay – enough about looks. Appearance only gets you so far. But the Vanquish’s upper-crusty-ness isn’t just skin deep. The boat’s hull is vinylester epoxy resin-infused E-glass, the molded stringer grid is glassed in, voids are foam-filled, coring is CoreLite PET, and vinyls are Nautolex Vyva Fabrics imported from Amsterdam. Put it all together and you get a boat over 23-feet which tips the scales at just 2,775-pounds. Most center consoles in this size are going to be closer to 3,500- or 4,000-pounds, which is one of the reasons why the Vanquish recommends putting a mere 200 horses on the transom. That’s notably less than many boats this size requires in order to post a cruise of around 30-mph and a top-end of 45. Added bonus: efficiency at cruise shakes out to around three miles to the gallon, which may not be in the same class as your Tesla but is still pretty darn awesome.

The hull design also plays a role in the lower power requirements and better economy. The hull is a variable-degree deadrise, which starts with a 55-degree entry that tapers all the way down to 17-degrees at the transom. That makes for easy planning, though it also means you’ll want to tab the nose down in the rough stuff and keep that sharp bow where it belongs.

Though you may be a bit worried about dripping blood on the seats or scuffing up the teak trimmings, the boat should prove completely serviceable for fishing. It has a standard insulated and lighted livewell in the cockpit with an option for a second well in the forward console seat, four rod holders in the gunwales plus six rocket launchers on the hardtop, and a fiberglass leaning post with an integrated cooler. There’s an optional raw-water washdown, which we say you’d be nuts to go without – especially if you plan on getting besmirching this beauty with chum and fish gore. 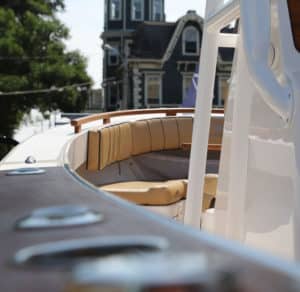 If there’s anywhere the Vanquish falls a bit short in the fishing department, it’s the lack of a dedicated fishbox. Compartments under the bow seats are insulated and could be used for icing down the catch, but they have relatively small hatches and with the cushions on top would be a bit clunky to access with a wriggling striper in-hand. If you really want to fish the Vanquish, having the forward console seat optioned as a cooler might be the best move.

A few other niceties to mention: the console head compartment is more useable than most on a boat of this size, with a step-down molded liner that increases headroom, dedicated racks for the (ugh) cocktail table, and a stylin’ teak entry door that reminds us of the days when walking around in khakis stained with teak-oil was a matter of pride. The transom walkthrough is also smart, with a fold-down seatback that turns into a step.

Will you consider a Vanquish 23 BHS if your main mission is slaying pelagic beasts? Heck no. Is this a boat one would choose to probe the shallows for light tackle casting on a regular basis? Oh, please. But if your lineage can be traced back to the Mayflower and your tow vehicle is a Bentley Bentayga (towing capacity: 7,716-pounds – and the tow hitch retracts electronically), then the Vanquish might just be your next fishing boat.