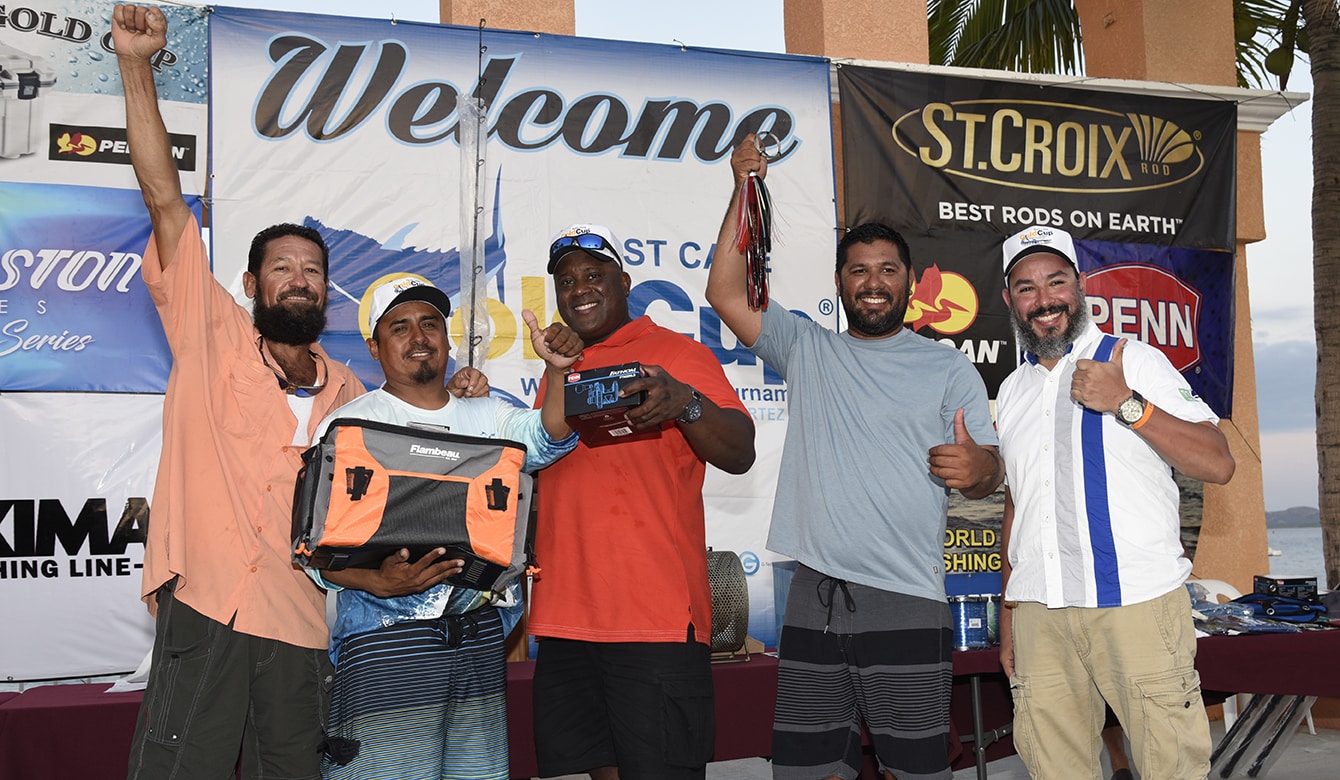 When it’s hot, the wahoo snap and the action doesn’t get much hotter than the East Cape of Baja, where the Van Wormer Resort’s Second Annual Gold Cup Wahoo Tournament held Saturday, August 25 showed a strong growth spurt when 210 anglers on 56 teams weighed in 22 wahoo up to 41.1-pounds, with the largest fish going to the team of Victor Locklin of Corona and Luis Beltran of San Jose del Cabo on the Oso Negro. 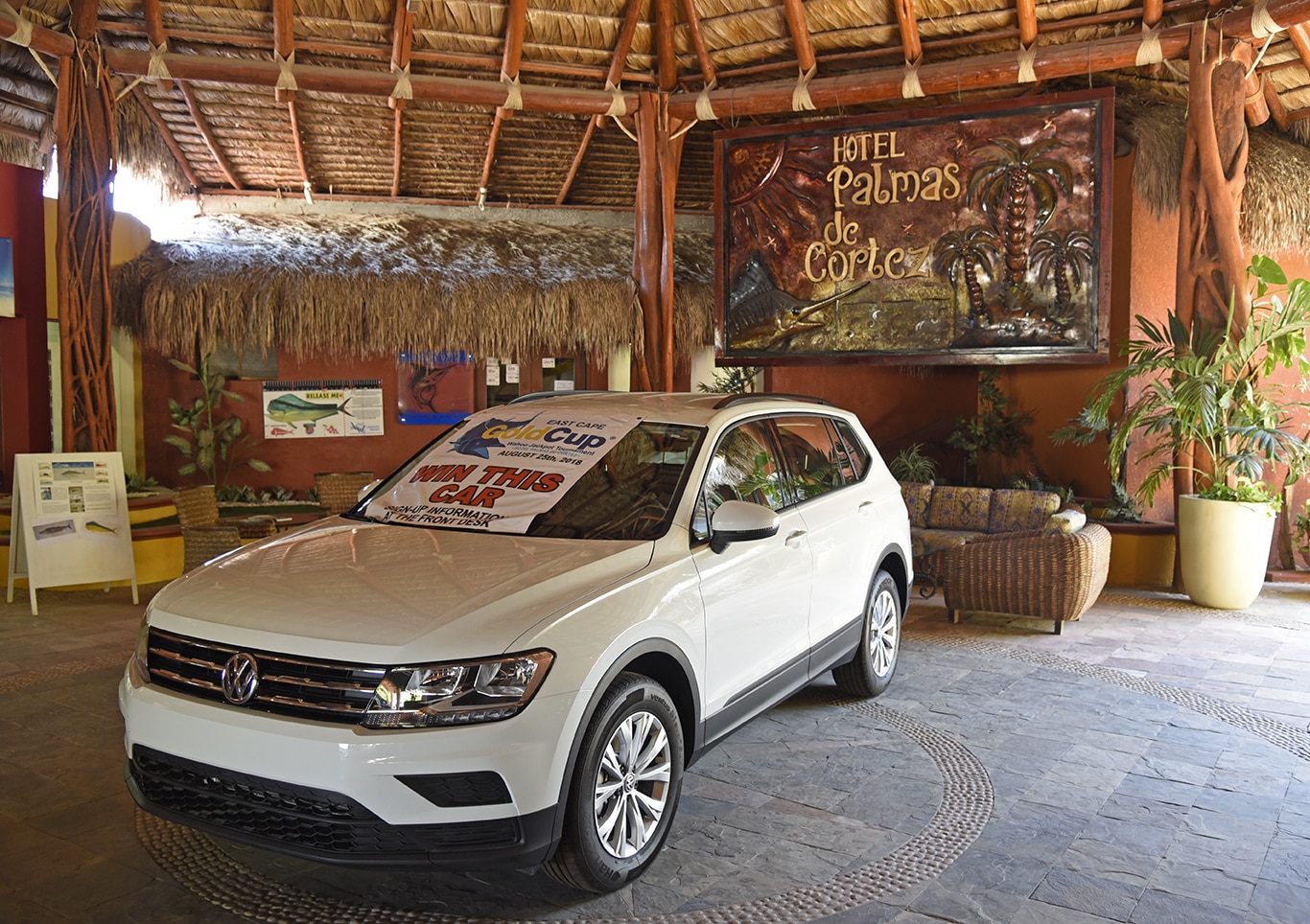 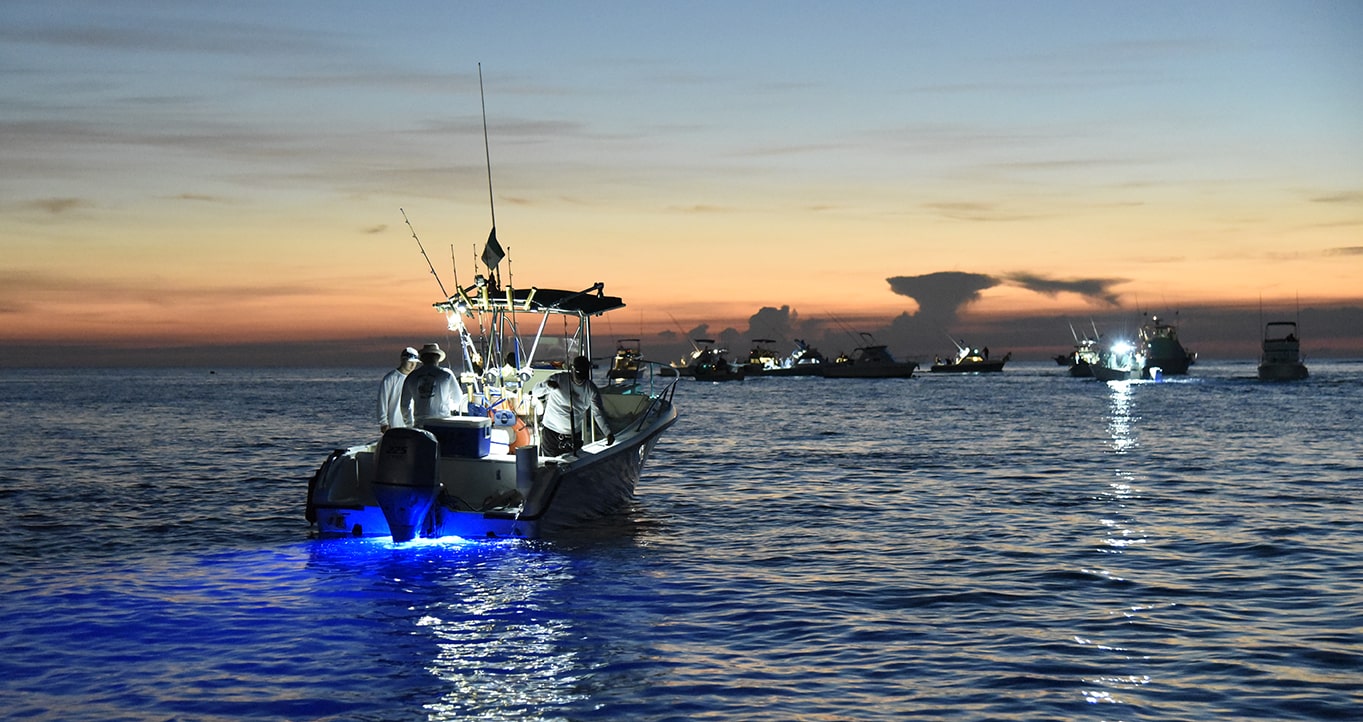 Locklin and Beltran were early favorites, having brought four wahoo to the Palmas de Cortez dock the day before the event. They had headed south, where many other teams pre-fished and reported success. Northwards towards Isla Cerralvo had kicked out quite a few ‘hoo leading up to the event, including a 38-pounder for Sergio Fainsztein of Angler Chronicles.

South was definitely the destination the majority of the teams had in mind when Maciel Van Wormer shot the starting flare at 7 AM, as all but 10 of the competition’s boats headed to the fertile wahoo grounds from Frailes to the Iman Bank – just about as far as the 4 p.m. weigh-in deadline would allow.

The scales opened at 1 and it was about half an hour later when the white of a hull pushing a wake through the flat Bahia Las Palmas waters showed on the southern horizon. The Cabo 35 Cortez Cowboy quickly made things interesting at the scales, as the team of angler John Schultz, son John and the La Ribera-based crew of Carlos Almanez, David Almanez and Edmanuel Aceveda hoisted a 38.1-pound wahoo caught on a wired-up, small purple hoochie.  While Schultz and company set the bar high for the Tiguan, they were only in the $200 jackpot, leaving four cash slots wide open.

The overall lead and the $500 slot were both claimed when Felipe Valdez of Buena Vista Beach Resort ran the panga Nath & Mitch up on the sand and Gary Johnson and Melissa Perlstein weighed in a 38.7-pound wahoo that slammed a black and purple (Purple Mackerel) Rapala Magnum X-Rap 30. The fish was taken up north, so it was clear both areas were on the bite for the tournament.

Meanwhile the Fresh Catch was at the dock and angler Gary Elrod, Monica Riva, Bill Upson and Cynthia Ariosta weighed in a 23-pound wahoo and took hold of $300 jackpot.  For a little while anyway.

The first of the 15 boats to enter “across the board” in the optional jackpots arrived and Bite Me team member Antonio Rochin Ruiz weighed in a 23.5-pound wahoo, and weighmaster Eddie Dalmau noted that ensured all jackpot moneys would be paid out.

Who all that money would go to was quickly changing as more and more boats arrived and tournament director Kit McNear called from his station at the dock to ask that fish be weighed as quickly as possible. As soon as one fish was weighed another was brought up by a covered side by side quad, which then took the weighed (and tail clipped) fish back to the Smokehouse processors or the boat they came in on.

A lot of the fish were in the low to mid 20’s and most came from the south. Esaul Valdez of Buena Vista Beach Resort said he fished south “with everyone else it seemed” for a 22.7-pound wahoo on a black and purple Rapala. John Berry said he worked hard all day for a single 21.3-pound fish that hit a purple and black Ken Matney Hi-5 jet head. Matt Hoffer got his 23.4 pounder on a ballyhoo, but said a much bigger wahoo ended up chewing through the 100-pound fluorocarbon straight tied to a Marauder. 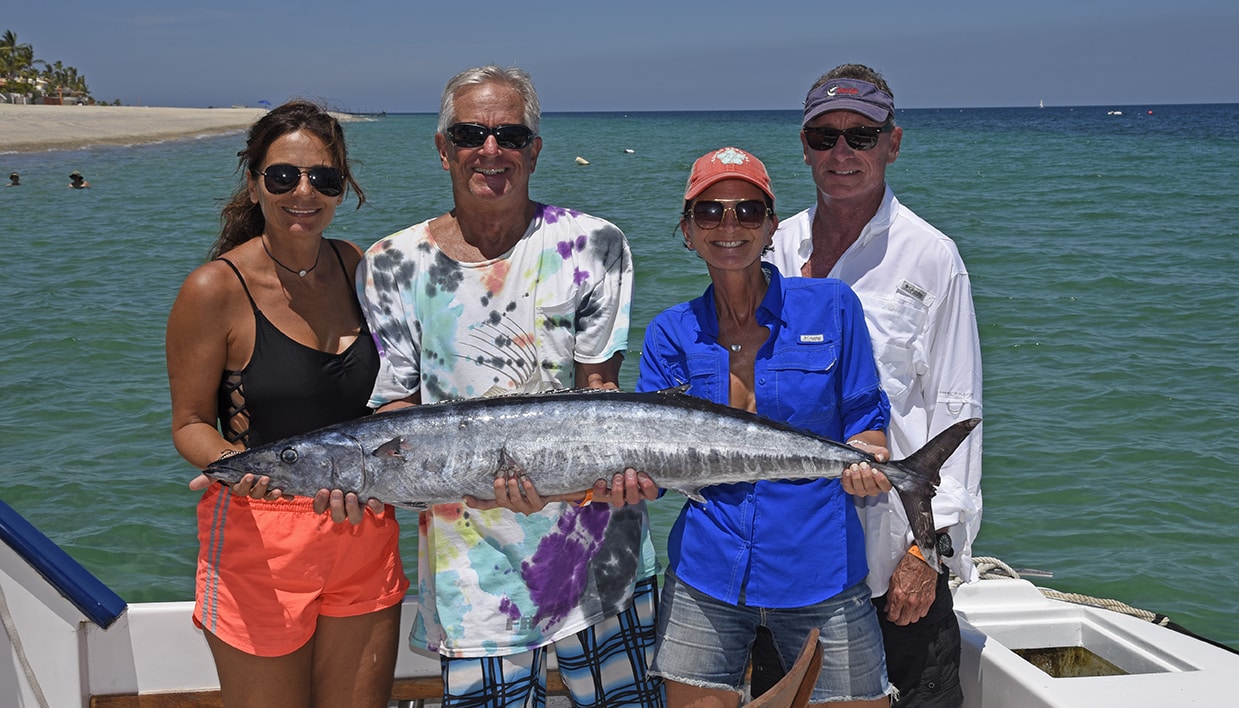 In the middle of all that, Eldo Harris on the Crazy Boy upped the ante on several of the overall slots with a 26.2-pound wahoo. There’s a reason Kit McNear claims the East Cape is the number one wahoo fishing destination in the world with easy boat access to the toothy speedsters.

The fish jumped back up a level in size when Mike and Matt Leary on the Mi Pistole hung up a 31.3-pound wahoo and had a brief hold on the $300 pot. Then John Boyer’s 35 Cabo Socorro pulled up. John’s Eat Me Lures is a longtime sponsor of Van Wormer Resorts events and this time his team brought a 35.5-pound wahoo caught by Ivan Olachea to the Palmas de Cortez scales. Boyer, who said the fish came on a ballyhoo, was in across the board and looking at all the cash from the $300 and $1000 pots.

That didn’t last long either as Sergio Fainsztein and his teammates Larry Moore, Ron Hobbs and Jack McCulloch squeaked by with a 35.7-pound wahoo to replace Boyer’s team. Fainsztein said the big wahoo hit a wired Rapala X-Rap Magnum 20. “We lost six other lures by fishing them with straight braid. Finally, we put on the wire and caught this one.” 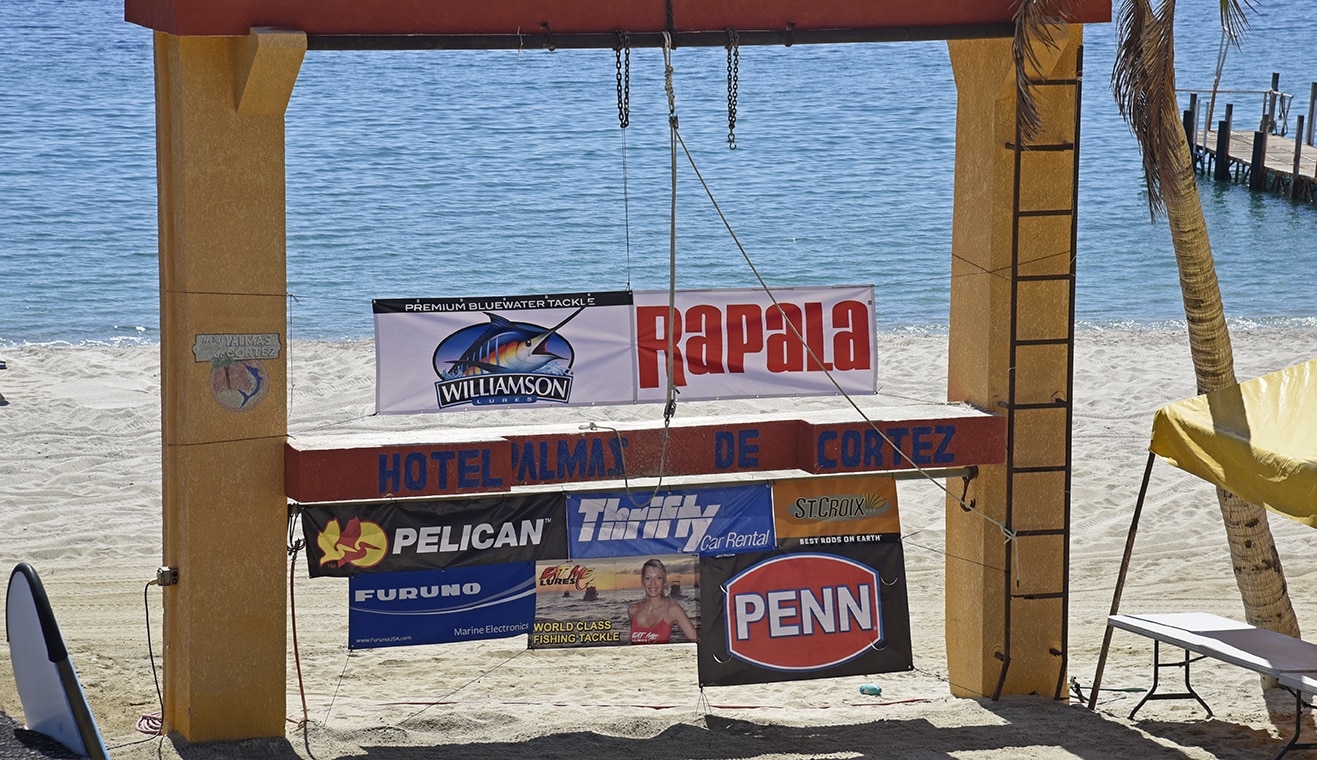 Fame, glory and fortune are fleeting and Kit’s voice on the radio said they were still a few fish to weigh, including a really big one he was going to send up right away. That’s when Victor Locklin and Luis Beltran came up the beach to the scales and their 41.1-pound ballyhoo-caught fish settled everything at the last minute, although the late arrival was not on purpose.

“Chucky (Van Wormer) told me to listen to my local skipper and go where he says,” noted Locklin. “We went way down south and caught this one and we were in a real honey hole when we caught a smaller fish. Then the boat broke down. Two hours later they got the boat fixed and we just made it!”

“We used my hooks, my bait, I ran the boat and we went to my spot,” said Beltran. “My brother Choco told me about the spot. He said once you get to that one point, you’ll see another point and the spot is just past there – that’s where the wahoo lady lives.”

Lady luck and local knowledge are a hard pair to beat.

Hit up the Van Wormer Resorts website to learn more.