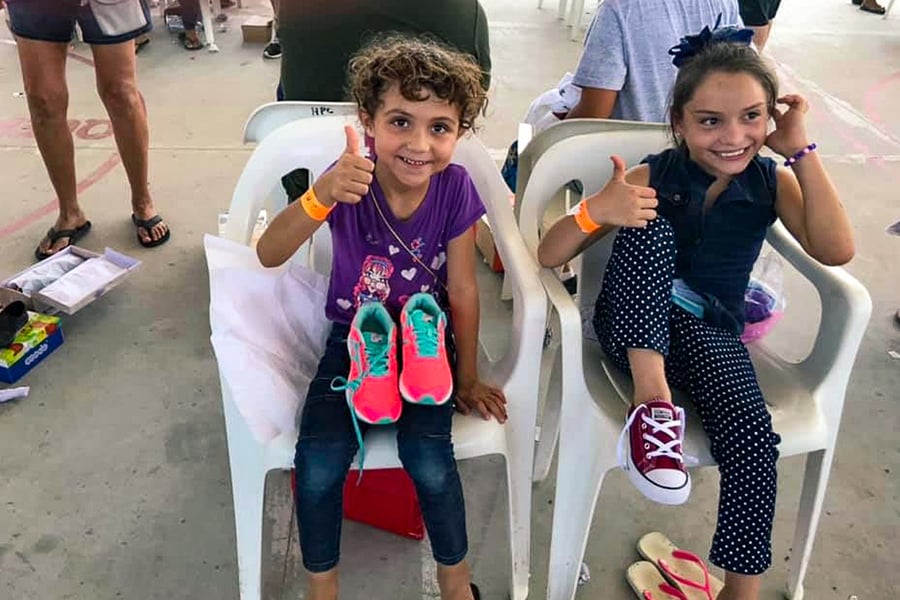 The marriage of Rosa Maria “Cha Cha” Ruiz Gonzalez and Bobby Van Warmer on June 27, 1965, in Santiago was the beginning of a family dynasty that would alter the face of East Cape for many future generations.
“Cha Cha” and her brother Tico Ruiz Gonzalez’s family roots went back to the 19th century; “Tico” had hired Van Wormer in the 1950s to help him open another sportsman’s camp when Los Barriles was a settlement of only five ranches. 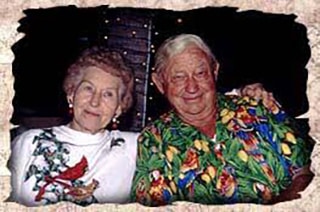 With Bobby’s supervision and people skills, coupled with Cha Cha’s grasp of business, this formidable twosome would build an empire, which ultimately became the Van Wormer Resorts.

Over the years, Bobby and Cha Cha turned over the reins of the property to their three sons, Charles (Chucky), Robert (Bobby), Jr., and Edward (Eddie), and under their watchful eyes, it has continued to flourish. 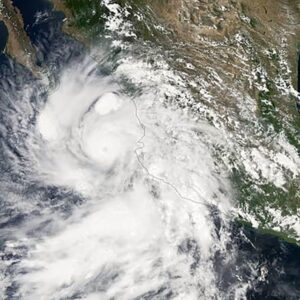 On September 1, 2006, Category 4 Hurricane John, made landfall on southeastern Baja California with winds up to 110-mph, devastating Los Barriles, and causing hundreds of thousands of dollars damage to the East Cape area.

That one ad and word-of-mouth produced hundreds of donations amounting to $60,000, which not only purchased building materials but was also given to locals needing assistance.

Hearing of the need, Jack McCulloch, who worked in the shoe industry, called Eddie Dalmau, General Manager of Van Wormer Resorts, and arranged to have shoes donated to the community.

Dalmau and his staff organized that first event on the first Saturday of October with the help of Soles 4 Souls; about a thousand pairs of shoes were shipped to the resort where the first “give away” was held on the driving range at Hotel Palmas De Cortez.

“Over 1,000 people showed up to receive shoes that day,” Dalmau marveled recently. “I remember we had only six volunteers for the hordes of people lined up needing shoes. We started at 7 a.m. and did not finish until 4 p.m., working all day in the blazing Baja sun without any shade.”

Over the past 13 years, the growth of Casting 4 Souls, has been gratifying. This year, 73 volunteers assisted staff members in serving approximately 4,000 people who participated from as far away as Cabo and La Paz. 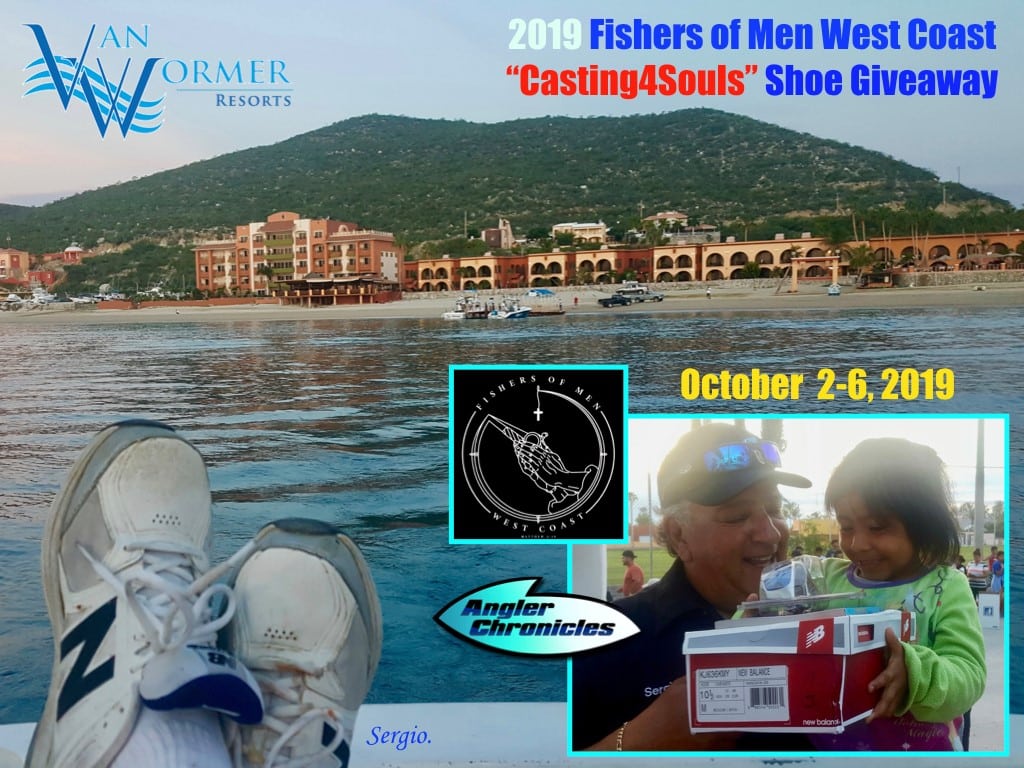 This year, volunteers from Mexico and the United States converged on the East Cape for the event. Thirty-eight volunteers stayed at Palmas De Cortez, and there were 25 local volunteers, both Mexican and American.
In addition to the shoes, both adult and children’s sizes, each person also received an AFTCO T-shirt, socks, belt, reading glasses, sunglasses, and Spanish Bible. Kids also received a toy and candy – thanks to a corps of sponsors, which included New Balance, ACV Logistics, AFTCO, Fishers of Men-West Coast, Soles 4 Souls, Angler Chronicles, and many more.

In 2019, the event was fine-tuned to the point that the 4,000 that attended were through the doors in about five hours.

Before the giveaway this year, the Angler Chronicles crew had an amazing and rewarding few days at the Van Wormer Resorts’ Hotel Palmas De Cortez, where it was great fishing for wahoo, dorado, jack crevalle, and other species.

The Angler Chronicles crew: Sergio and Rhonda Fainsztein, Ron Hobbs, and John Senften were honored to participate: “We are off to East Cape – to Baja California for a couple of days of fishing – before the “Casting4Souls” shoe giveaway,” they wrote. “We are joined by Jack McCulloch, Jr., Apryl Hilleary McCulloch, Graham McCulloch, and Brayden McCullough of Fishers of Men West Coast, Harry and Randall of KC Anglers, and Elyse Teslai and Mitch Blades of Team 57. Let’s do this!”

The Fainszteins, Hobbs, and Senften also assisted, serving thousands of needy residents of the local communities. The success was only due to the generous participation of the volunteers who came together with the good-hearted people who attended Taco Tuesdays at Michael’s Sports Pub & Grill. “You all rock,” they praised!

And then came the declaration on Facebook: “It’s begun! … More than 4,000 people are in line to receive a pair of shoes here in Los Barriles, Baja California Sur, Mexico … The volunteers are hard at work fitting and placing shoes on the needy…. epic turnout!” 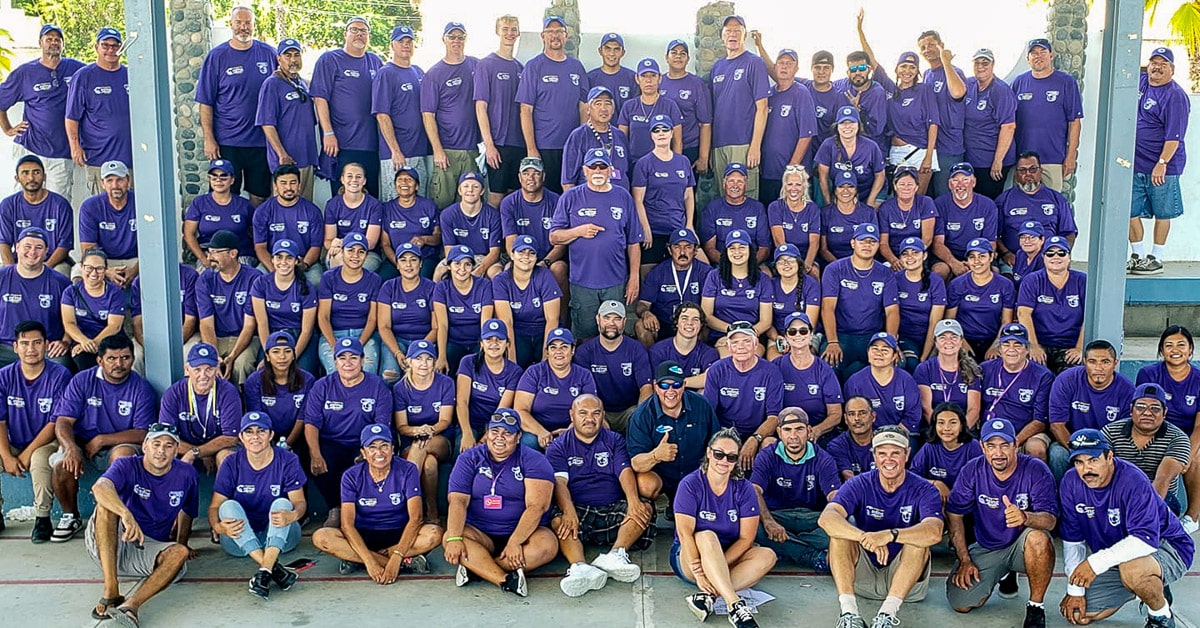 “It’s a wrap! … Mission Accomplished! … No child left the Casting4Souls event without a pair of new shoes!”

Casting4Souls plans an annual giveaway on the first Saturday in October for the foreseeable future. Volunteers for next year’s “give away” or those who may want to donate can contact Dalmau at [email protected]. 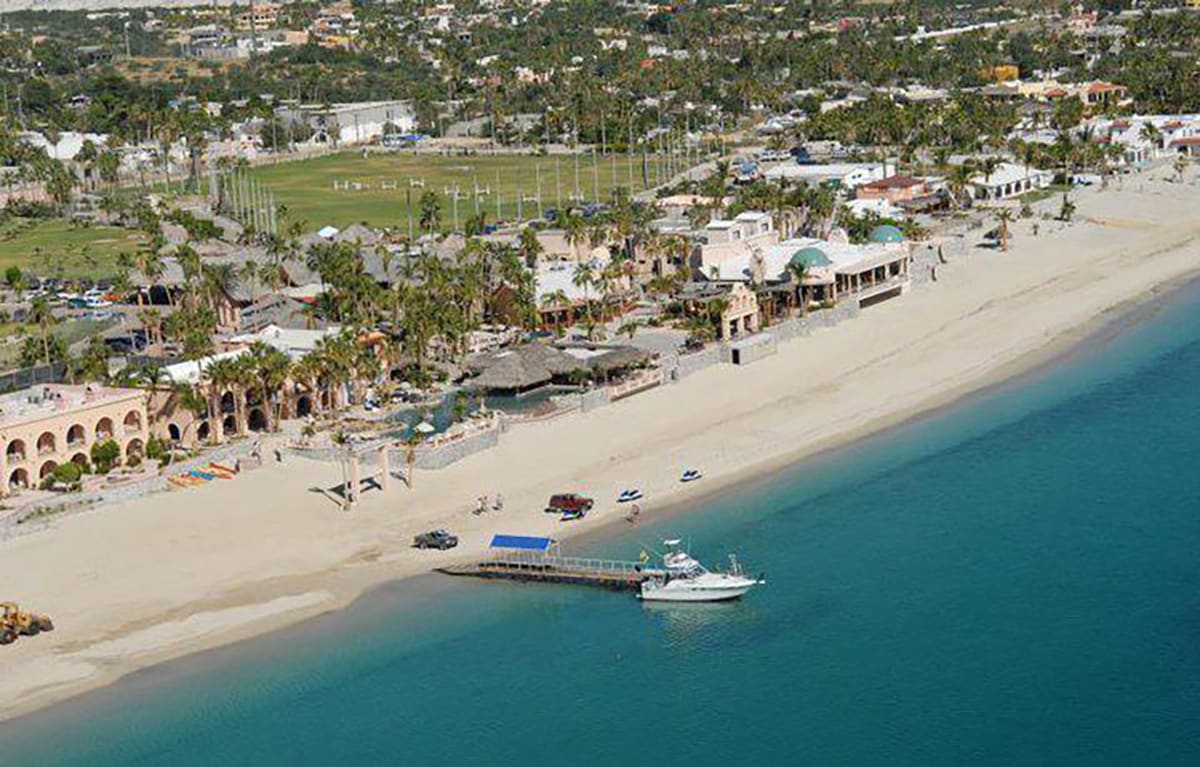 Hotel Palmas de Cortez spans the beachfront of the town of Los Barriles. Along a white sand beach nestled on the edge of the Sea of Cortez, it offers full amenities for anglers and non-angler family members alike. The infinity-edge pool and resort-style swim-up bar overlooking the sparkling Sea of Cortez is one-of-a-kind at East Cape, providing views of the Sea of Cortez made famous decades ago by Ray Cannon in his The Sea of Cortez: Mexico’s Primitive Frontier.

Considered Baja’s vacation and big game fishing spot, it has not been over-developed, is not crowded, and it still offers the unequaled sportfishing that drew early pioneers to the area in the past.

Van Wormer Resorts boasts the largest fleet of sportfishing boats in Baja, operated by some of the most respected captains and crews; they lead first-time as well as seasoned anglers in pursuit of the remarkable catches of blue and striped marlin, sailfish, dorado, wahoo, yellowfin tuna, roosterfish and other species of fish. 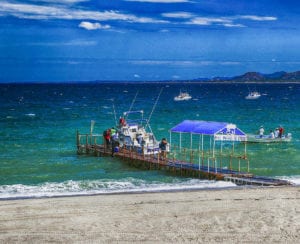 A private dock in front of each resort allows anglers a quick way to board and depart on a fishing adventure of a lifetime. Additional water activities include spectacular diving, kayaking, paddle boarding, and windsurfing or just poolside relaxing. 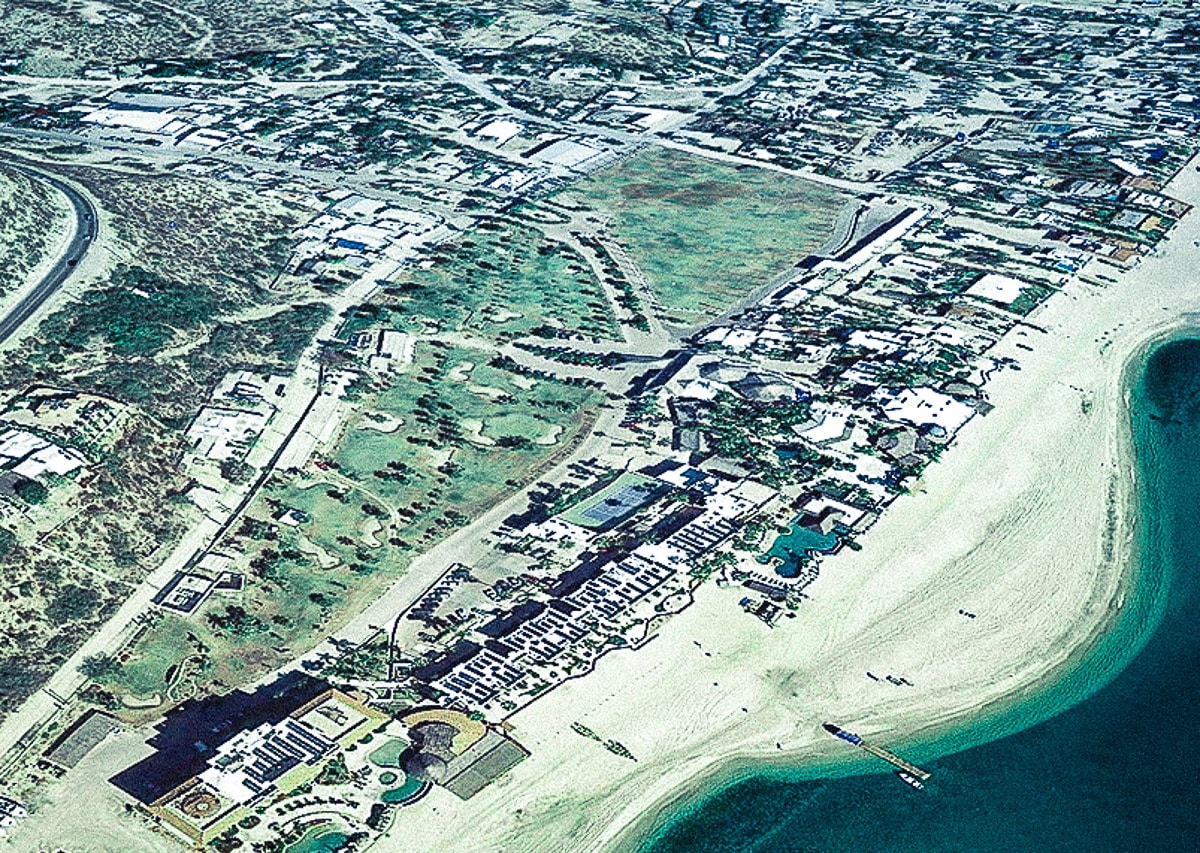 The 9-hole executive golf course and driving range are excellent alternatives for those taking the day off from fishing. Other activities include ATV rentals, horseback riding, eco-tours, tennis, and shopping excursions to Cabo San Lucas and the capital city of La Paz. 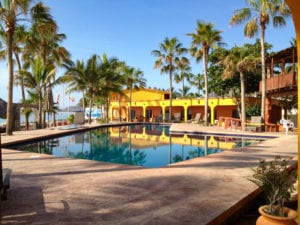 Hotel Playa del Sol is a separate property, a five-minute stroll north from Hotel Palmas de Cortez featuring authentic Mexican charm. Playa del Sol has an intimate feel of a home away from home.
With views of the Sea of Cortez, and located on its shores, guests can choose to stay in either an air-conditioned, recently-remodeled ocean view room or, a garden room situated in the quietest part of the hotel – a perfect setting for small groups, families, or an intimate hideaway.

Van Wormer, Sr. arrived at East Cape searching for a better life, and he found it, not only for himself and his descendants, but he also strived to improve his surrounding community and the many local families who choose to call East Cape their home.

The Van Wormer Resorts combined are now the largest and most diversified destination in Los Barriles, BCS, and the sons have seized their legacy and enriched their eco/friendly fishing properties.
Van Wormer, Sr. passed away on December 7, 2010.