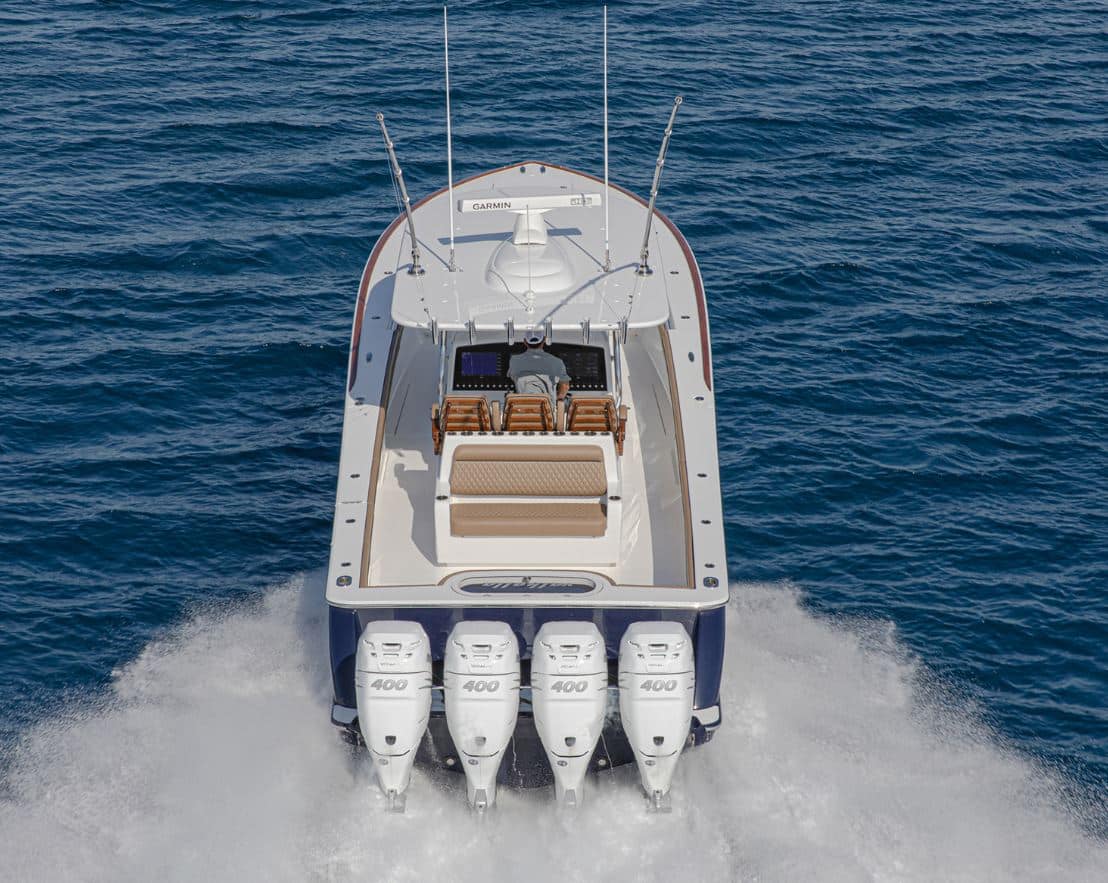 The Valhalla V41 may be the ultimate weapon to carry you into a bluewater battle.

When Viking Yachts announced its intention to build a line of outboard boats called Valhalla it caught just about everyone by surprise, but when we checked out the Valhalla V41 up close and in person, we were anything but surprised. Yes, Viking’s reputation for building high-end, rugged but, luxurious fishing machines translated into the outboard realm exactly as one would expect.

When we ran the V41, the most eye-opening moment came after firewalling the throttles. And we say eye-opening in the literal sense because the wind-blast was so intense we thought our eyeballs might get blown out of their sockets. With quad Mercury Verado 400 outboards hanging from the transom we blazed across Abescon Bay at a hair-ripping, clothes-whipping 73.6 mph. And that was with five people aboard and a half load of fuel. Running at a reasonable 4500 rpm produced a 45-mph cruise, and when we went through the inlet and entered the open Atlantic that cruising speed proved perfectly comfortable in a two- to three-foot swell with plenty of surface chop.

Much of the credit for this rather extreme performance goes to the hull design, which incorporates two steps and a centered aft tunnel. This reduces wetted surface and drag, gaining a speed and efficiency boost in the neighborhood of 15-percent. Since some boats with stepped hulls can get a bit squirrely at high speed, the design also incorporates vertical sidewall tunnels that help maintain a firm grip on the water. Put it all together, and you get that blazing-fast top-end plus with the ability to crank the wheel hard-over and feel the hull carve out a turn just like a traditional monohull. It’s a Michael Peters Yacht Design creation (dubbed “SVVT,” for Stepped Vee Ventilated Tunnel), which has also been adopted by other top builders including the new project initiated by industry legend Earl Bentz, Caymas Boats, and models like their Caymas 26.

What we saw above the waterline was every bit as awesome as what lays below. Take the livewell, for example. It’s oval, pressurized, has a clear lid and a viewing port on the front, and has a capacity of 90-gallons. That’s not a misprint—90-gallons. If you want a second livewell, the front section of the forward console lounger can be plumbed as an option. Fishbox capacity is another stand-out. Sure, the cockpit has flanking deck boxes and there’s a second pair forward. That’s great, but the shocker comes when you open up the coffin-sized 182-gallon fishbox in the bow deck. If you catch a fish too big to fit in there, your day of fishing is complete anyway. 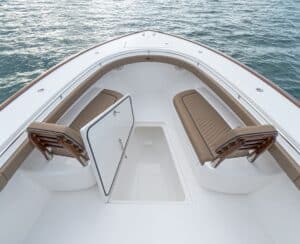 Another thing the V41 has to offer anglers, something that’s often under-rated on larger center console yachts, is plenty of open deck space. Quite often on a boat like this, the “console” is really a full-blown central cabin, reducing deck space on the sides to a walk-around and leaving barely enough room in the bow for a couple of anglers to stand between the console lounger and the forward seats. In this case, however, Valhalla keeps the console relatively svelte. It houses a compact twin berth, head, sink, and rod racks—that’s it. 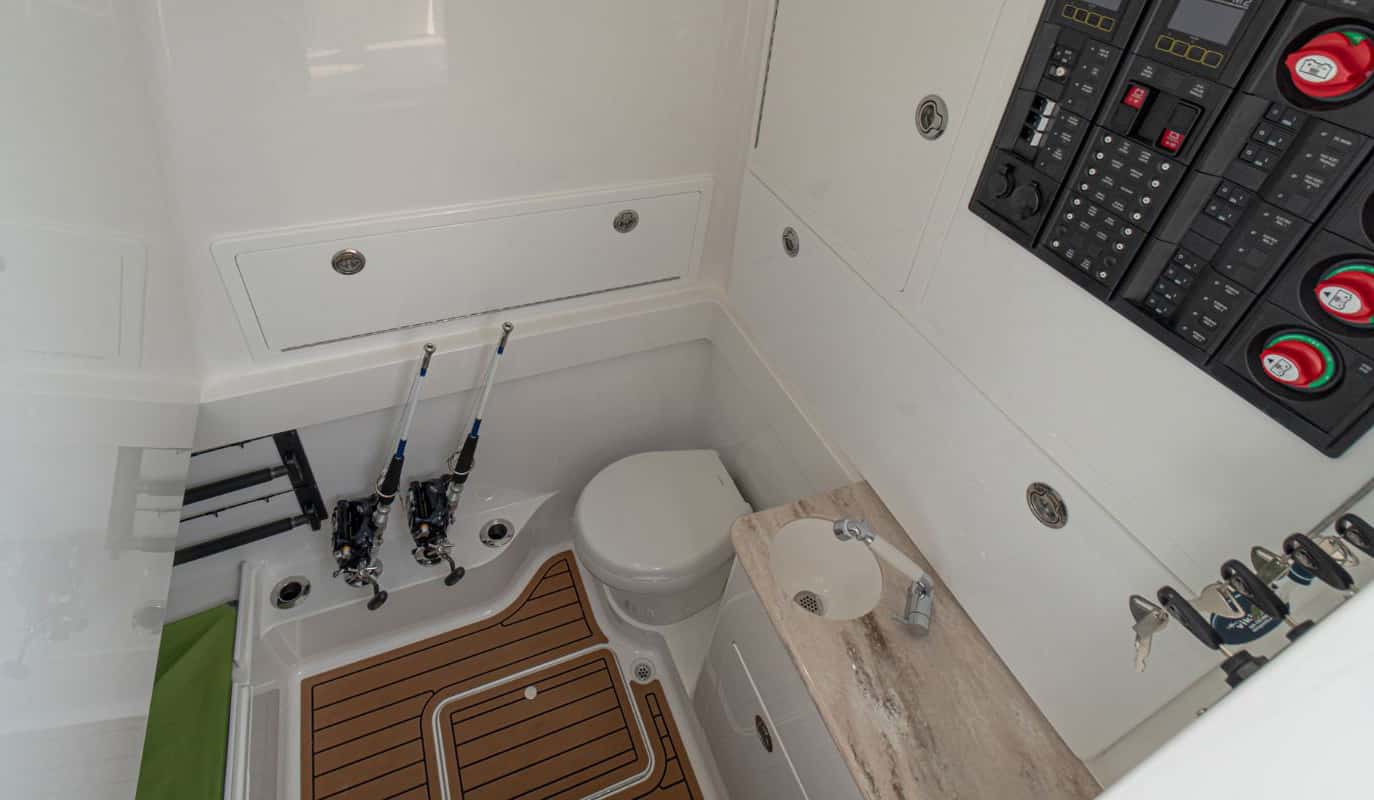 One other thing we just have to mention about the V41: it’s about as comfortable as it gets on outboard-powered center consoles. Sure, the Seakeeper gyroscopic stabilizer hidden below decks had a huge impact. But we also note that coaming bolsters line the inwales 360-degrees, all of the cushions are upholstered with diamond stitching, teak armrests swing down at the triple-wide helm seat, and the aft-facing seat built into the back of the leaning post would be perfect for bait-watching if it didn’t do such a good job of tempting tired anglers into a nap.

Downsides? Well, as one might guess you can’t exactly expect this boat to be economical in nature. The base model lists for over a half-mil, a well-rigged boat is going to cost substantially more than that, and zinging around in the ocean at 70-plus-mph means burning over 120 gph. Then again, no one ever said Thor’s hammer would come cheap.