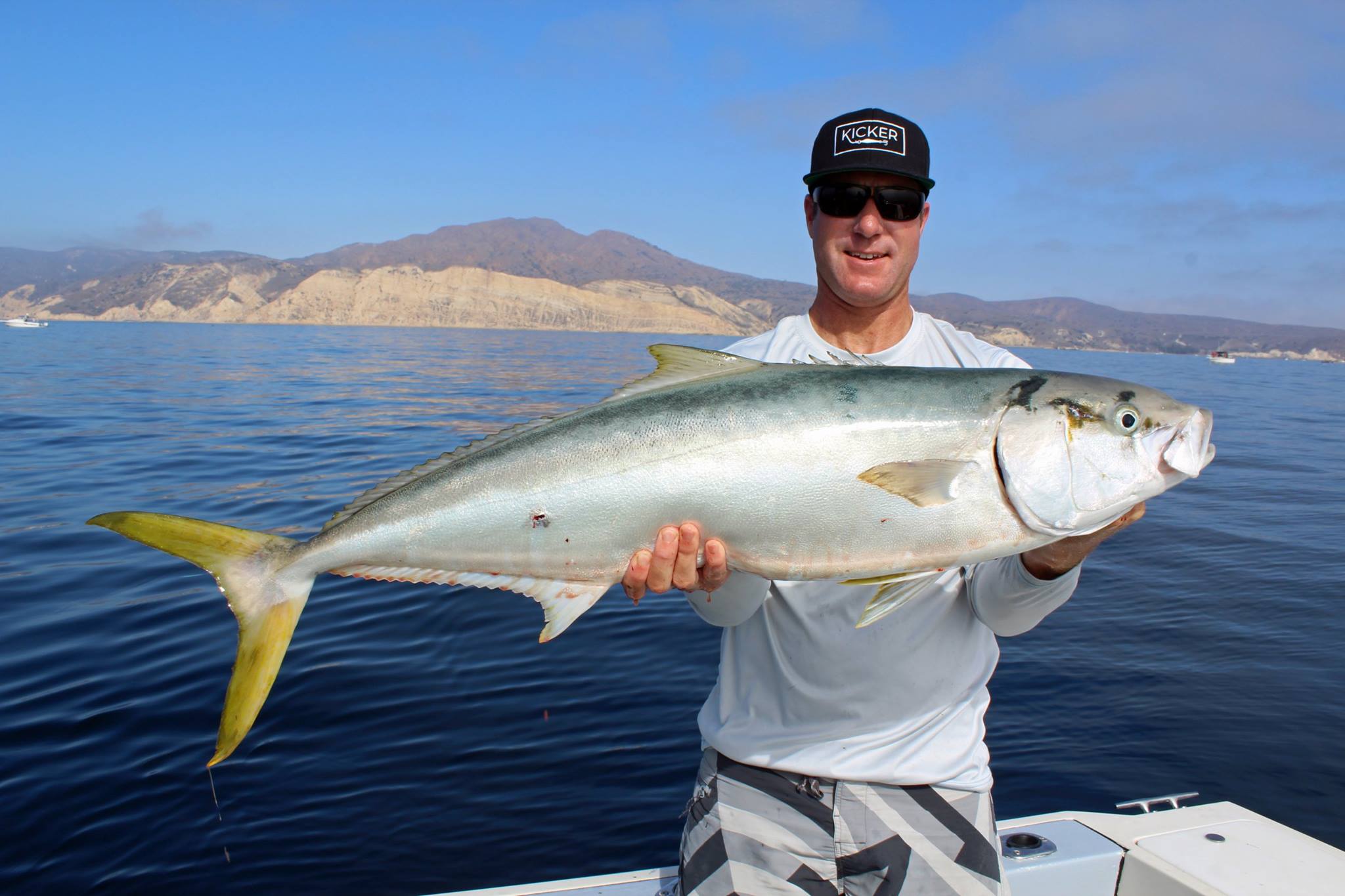 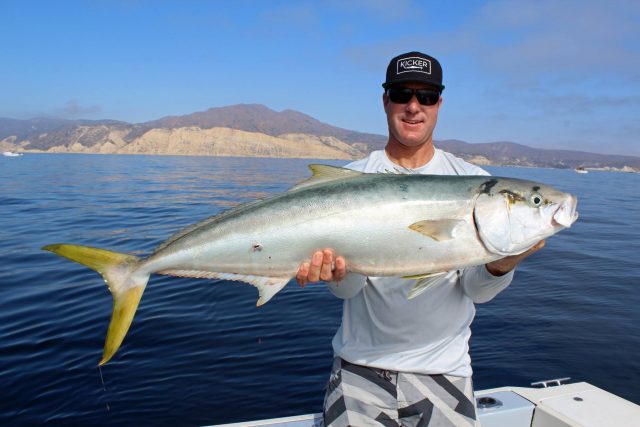 We’re about an hour and forty minutes past Fall’s official start as I sit here writing this on Thursday morning but the fish are biting like it’s the middle of summer. The school sized yellowfin tuna that were MIA for most of the year have settled in to bite and the yellowtail at the islands are continuing to cooperate on a regular basis. Throw in a better than average marlin season into the mix and anglers are left with lots of good fishing options for the weekend. 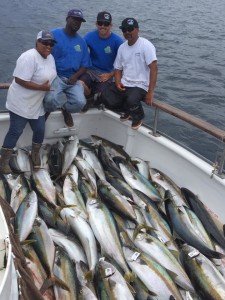 I’ve spent most of the last few months leading my reports with the offshore fishing but now that Fall has arrived I think I’ll change things up a bit and start on the inshore front. The best and most consistent action is still the yellowtail bite off Santa Cruz and Anacapa Islands. While the hot spot jumps around from day to day, there have been good grade yellows biting at the islands for months and it doesn’t look like that’s going to be changing any time soon.

Scott Summersgill, who fished with Captain Nick Tharp of El Tiburon Charters over the weekend reported, “Fished Santa Cruz Island and went five for five on the surface lures. Two fish came on the mint Waxwing and the other three on the surface iron. All of our fish were around a 20-pound average and our biggest went 27-pounds. We fished bait the entire day without so much as a nibble.” Sport boats reported similar results with the Aloha Spirit landing 78 yellows for 22 anglers on Tuesday’s trip. 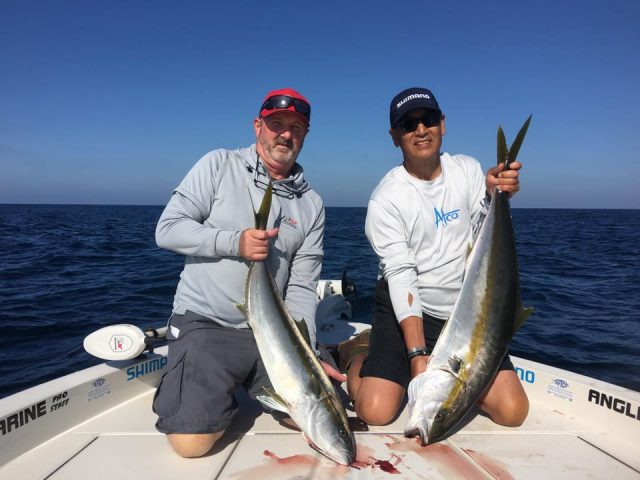 The yellowtail are also biting for private and sport boats fishing Catalina and San Clemente Islands.

Captain Benny Florentino has been fishing San Clemente Island lately and has been reporting good calico bass fishing with a side of yellowtail on most of his trips. Captain Gerry Mahieu reported fishing the backside of Catalina Island on Tuesday and landing several large yellowtail before heading offshore to look for tuna. He located several schools of tuna below the island but couldn’t get any to bite despite having them come up foaming in his chum. I heard a similar report from Captain Jimmy Decker who encountered multiple schools of 15 to 40-pound yellowfin while competing in the Avalon Billfish Challenge. 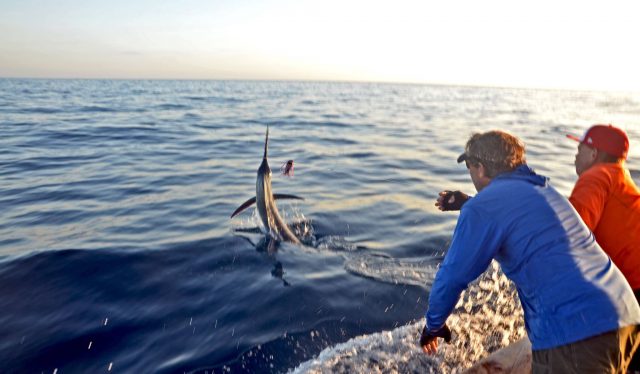 Speaking of marlin, while the bite isn’t as good as the wide open action we had last year at this time, there are still plenty of fish to catch. I fished the Balboa Angling Club MABT tournament aboard the Good Karma over the weekend and you can read my full report here. There are marlin spread from above Santa Barbara Island down to the Mexican border, but the biggest aggregations are off the east ends of Catalina and San Clemente Islands. If you’re looking to catch a marlin, I’d suggest looking for sleepers to cast on early as the fish have not been biting the jigs all that well. 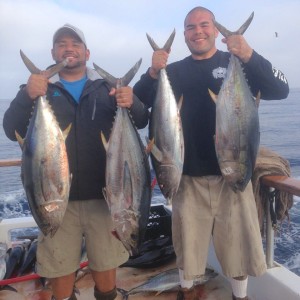 In regards to the yellowfin bite I referred to earlier, it’s mostly happening fairly close to shore and the bulk of the fish are being caught on the local banks off San Diego. These fish aren’t very big, averaging less than 20-pounds, and are receiving a ton of boat pressure. You don’t really need to go on an overnight trip to access these fish as the San Diego and other 3/4-day boats have been catching them. Also, if you’re gang bang adverse I’d suggest looking somewhere north of there. While there aren’t as many fish off Orange County there are enough to put a day together if you can find them. Sport boat anglers looking to get in on the action without suffering the crowds should check out one of the 5 to 5 trips Dana Wharf is running this weekend. The boats had good scores on Wednesday’s trips and are fishing away from the worst of the fleet.