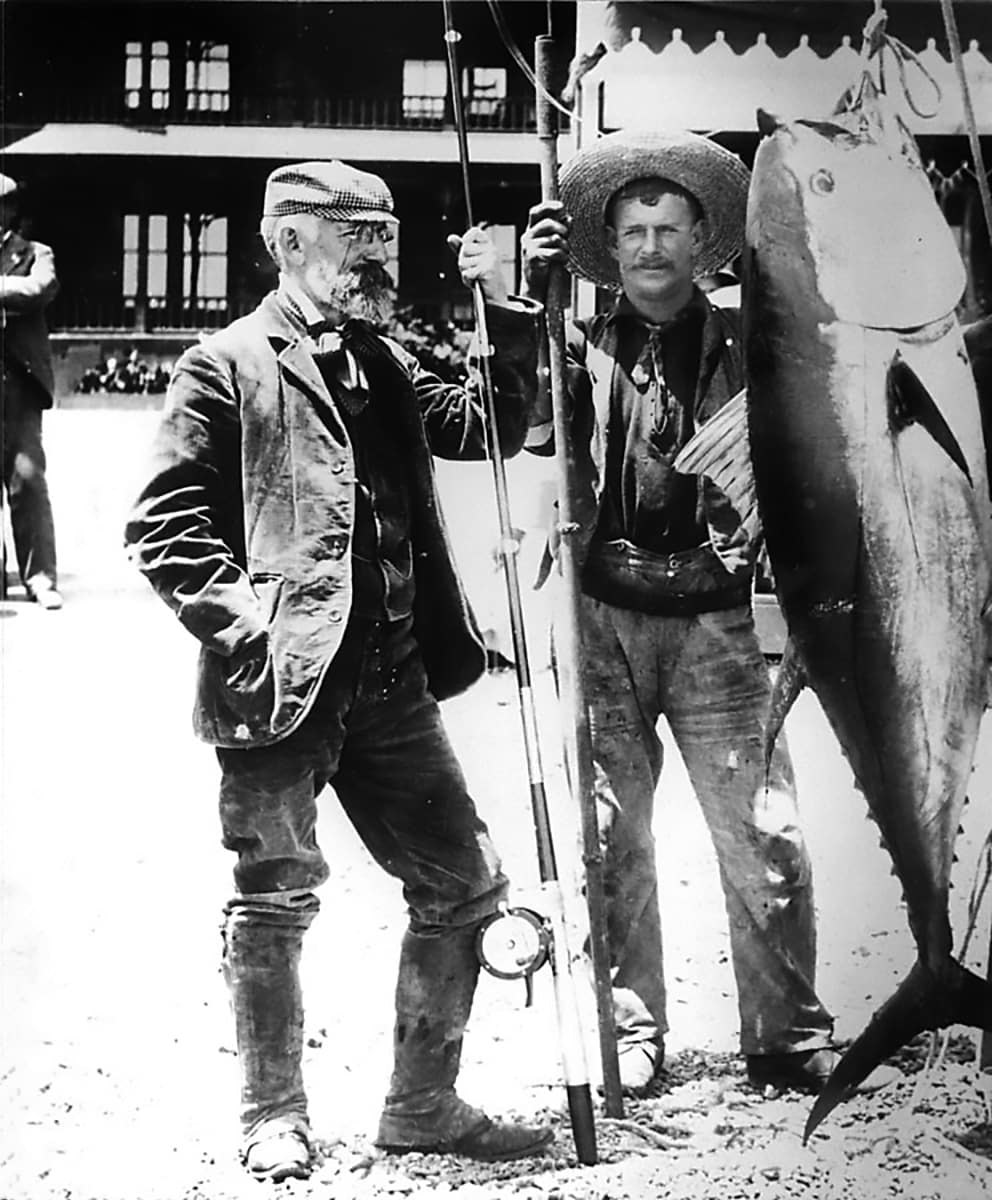 On June 1, 1898 – 117 years ago – author, sportsman and biologist Charles Frederick Holder landed a 183-pound bluefin tuna on rod and reel, literally establishing big game fishing in California as well as in the world beyond.

Other notable rod and reel catches soon followed including the first striped marlin in 1903 and the first swordfish in 1913. Today, the private clubhouse remains a beacon of sportfishing, majestically overlooking the Avalon Harbor – a virtual museum of tackle, memorabilia, and prototypes of many innovations, including teasers and outriggers that were developed in the early years. In the summer of 1988, Jim Jenks called and invited me to lunch. “How would you like to become a member of the Tuna Club?” Jim casually inquired. Without hesitation I replied, “Of course I would.”

Jenks recruited fellow club member Carl Lund to be my co-sponsor and by month’s end, my application was submitted. Letters of referral were written and submitted to the membership committee with assurances that I should be a member before daylight savings went away in the fall. However, the time changed in the fall, and I had heard nothing. Holidays arrived and I attended the TC Christmas lunch where various members assured me that my application was being “fast tracked” and it wouldn’t be any time at all before I would be writing a dues check … member or not, I enjoyed the party.

The winter of 1988 faded into spring of 1989; I still waited for a notification from the Membership Chairman. Jenks and Lund both confided that it would be just a little longer. It wasn’t until mid-May that the Membership Chairman called and invited me to breakfast at the Rancho Santa Fe Country Club to discuss my application. Once I arrived, however, he was far more interested in discussing swordfish baiting techniques than my application. He proudly showed me one of the 5-pound squid he had stashed in the kitchen freezer of the Country Club – a turn of events which worked for me.   I figured that my application must have been satisfactory and he would get around to it after he finished talking “swordfish.”

Sure enough, he finally opened a folder with my application. He commented that everything seemed to be in order and that all I had left to do was meet with the entire Membership Committee for their approval. However, he did have a few tips for me. He suggested that I should get a haircut before the meeting and that I should be sure to wear a tie to the interview.

Okay, so I freaked out a little and wasted no time calling my sponsors! In very clear and concise terms, I informed both of them that I was 49-years old and didn’t feel that I needed to be told when to cut my hair or what to wear. If my membership depended on that, I would just have to remain a barbarian and not be a member of the Tuna Club.

I didn’t cut my hair, nor did I wear a tie when I met with the Membership Committee. And there was no mention of either. They were far more interested in my reasons for wanting to join the Club and my interest in fishing in general. Once again I was assured that I would hear soon and told not to worry.

Finally, nearly a year after the application was submitted, Jenks called to inform me that I had been approved and that we would be leaving the following day on his 90-foot, Jones Goodell ocean going yacht\sportfisher, Ocean Pacific, for Guadalupe Island to catch my voting fish. Everyone should have sponsors like mine!

Jenks, Jock Albright, Hank Weeks, Captain Jon Ingram and I headed south for the Island the next afternoon. We rigged tackle in the 50-foot plus aft deck under the warm June sun as the we made our way down-swell in a gentle following sea. A few of Weeks’ concoctions of rum and something – (simply called “Hanks”) – and a spirited debate on the pros and cons of various knots helped pass the afternoon. Later that evening we arrived and anchored near Monster Rock at the south end of Guadalupe Island.

The following morning, I wandered out onto the deck that looked more like a bowling alley than a cockpit; humbled, I realized there would only be four of us sharing the immense fishing cockpit of the Ocean Pacific.

In a few hours we had enough scad mackerel to begin slow trolling.

Jenks elected to stand in the day head for protection from the cold wind as he trolled his scad. I stood at the ready near the stern, line firmly pinched between thumb and forefinger as I watched and waited.

Without warning, the line was snatched from my fingers – the coils of line on the deck slithered over the rail as something unseen inhaled the 5-pound scad mackerel. In less time than it takes to tell, the line came tight and the clicker on the reel sounded like a small, clunky machine gun firing rapidly.

Reel in gear, a couple of firm hook sets, and it was “fish on! Fifteen minutes later, the bluefin was swimming on its side at the corner of the stern. Jenks, Jock and Hank were whooping and hollering congratulations when finally I asked, “Don’t you think we ought to gaff the fish first?” In a heartbeat, Jenks reached down with the gaff and swiftly brought the tuna on board. The boat scale indicated the fish weighed 71-pounds, which would qualify as a Tuna Club button fish on the 30-pound Dacron.

The rest of that day and most of the next, we trolled back and forth along the face of Monster Rock with nothing to show for our efforts. We were still celebrating my catch late in the afternoon as the OP turned and pointed northward toward home.

Traveling uphill toward Avalon, questions began creeping in. Was the boat scale correct? Was the tuna really large enough to qualify? Would the line test? Etc. These and more doubts and questions ran through my head and were still present, even as we tied up to the Avalon pier.

The moment of truth came as Rosie herself pulled the lever on the scale. Up the needle went 68… 69… 70… stopping at an even 71 pounds. I breathed a sigh of relief. Next, we went to the Tuna Club and strung the line on the brand new, shiny line tester and began turning the knob. Ever so slowly, the Dacron line became so taut until it almost hummed – and with a loud SNAP the line broke! We all silently stared at the gauge for just a moment before everyone broke out in a cheer. The line had tested at 29.75 pounds, which not only qualified me for membership but also for a coveted TC Purple Tuna Button!

Later, Mike Farrior, Club Historian, called to congratulate me on the catch. He explained how significant that catch had been as he confided that there had only been a handful of members who had qualified for TC membership with a bluefin tuna in the Tuna Club’s history.

A few years later, in the early 90s, Farrior, another fellow TC member, Don Sloan and I sat on the porch of my beach front home, Rancho Deluxe, at East Cape, gazing out at the gin-clear water of the Sea of Cortez, searching for signs of the next feeding frenzy erupting. The topic of discussion was Mike’s interest in antique tackle. He told us fascinating stories of his latest acquisitions, describing the tackle in detail. Thinking out loud, I commented that the Tuna Club should have a tournament that required the use of pre-1940 tackle only.

The consensus was that the idea of an Antique Tackle Tournament had merit. We were still discussing the concept when we were interrupted by a school of large roosterfish slashing into a school of sardina and knocking the hapless baitfish up onto the sand. Tabling the discussion, we seized our rods and ran to the beach.

Later that summer at a porch party at the Tuna Club, the Antique Tackle Tournament concept arose and a few members were intrigued. The discussion continued late into the night lubricated by plenty of drinks with something brown in them.

Finally, Tuna Club Director Mike Blower suggested an informal Antique Tackle Challenge, nothing official, between his crew on the Dreadnought and my crew on the Watercloset to be based in Avalon and held on the first weekend in October. Throughout the summer, the banter between the two crews escalated as we began their search for pre-1940s tackle that would be approved by Farrior. Tackle was found and approved, and preparations were made.

Unfortunately, small craft warning flags were flying at both San Diego and Avalon that weekend, requiring the event to be rescheduled.

Throughout that winter, the concept for the tournament gained popularity; the Tuna Club Board of Directors agreed to add “The Linen One” to the tournament schedule for the following year.

The Catalina Tuna Club’s annual Linen One tournament requires entrants to fish with pre-1940 rods made of wood or bamboo along with reels loaded with 6-, 9- or 24-thread linen lines (testing 18, 27 and 72 pounds, respectively).

The rules do not state the line must be old, but it often is. Most manufacturers quit making it in the early 1960s, soon after monofilament became the standard. Only specialty tackle dealers such as John Doughty of J.D.’s Tackle in Balboa can dependably find it through antique dealers and small mills in Ireland and Belgium, where demand often outstrips supply. Mark Cernich, while president in 2006, moved the date to earlier in the season in conjunction with the Avalon Hospital Benefit and recruited Matt Campbell to chair the event. Recognized as the only tournament of its kind in the world utilizing antique tackle, the event continues to grow.

For the past two years, I have had the honor of once again participating in the event – 2014, aboard Past President B. G. Williams‘ Sub Chaser, a 50-foot Bertram with Matt Campbell, Tournament Chairman; Milton S. “Stan” Grier and Paul Hoofe. The weather was picture perfect! Paul Hoofe hooked a striped marlin on a lure using 9-thread line earning him First Place in the one-day tournament.

This year, Sub Chaser’s team consisted of Williams, with Campbell, Tournament Chairman, Past President Christopher Torre, Robert W. “Bob” Hetzler and I. Expectations were high after an already phenomenal fishing summer as we headed up to the 17, above the west end of Catalina.

A hook-up was the easy part this year. With all the anglers using the pre-1940 tackle and line, reports of fish falling off – or tackle failures – far outnumbered reports of successful tag and releases or catches. Unfortunately, on our boat the three bites on 9-thread all ended up in the first two columns, leaving us with zero catches. This year’s honors belonged to Tony Sabatino for his tag-and-release striper on 9-thread, followed by Bill Larkin with a membership-qualifying 118-pound striped marlin.

Michael Farrior and I, two of the three who hatched the idea at Rancho Deluxe more than several decades ago, attended the event this year and both agreed that thanks to the Tuna Club, Past President Mark Cernich and Matt Campbell’s stewardship, our inspiration spawned on a lazy Baja afternoon, had been polished and fine-tuned to perfection. Bundling the tasks of locating qualifying tackle, restoring it to fishable condition and then catching a qualifying fish allowed modern day anglers an opportunity to turn back the clock. It encourages members to experience the thrill of attempting and succeeding at catching a trophy fish with similar tackle as the pioneers of sportfishing, demonstrating the importance of the bridge the Tuna Club offers between angling today and the past.