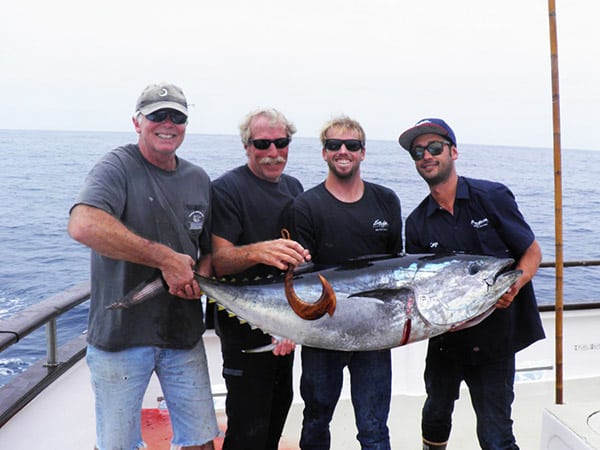 Though far from being wide open, the tuna bite is getting better by the day for boats fishing out of San Diego landings. Recent trips on the Pacific Voyager and the Tribute, which were on 2-day trips this week, had a good mix of yellowfin, yellowtail and bluefin. The biggest being a 100-pound class fish on the Pacific Voyager.

While these reports sound pretty similar to the reports we’ve been getting for the past month, there is one big difference; the fish are being caught a lot closer to home.

The fish that are closest to home are heavily keyed in on micro bait, which is making them tough to catch right now. But their feeding preference could change at any time and I fully expect to see some private boaters score fish from that area in the coming days. Private boaters looking for information on the specifics of this bite should log onto fishdope.com to get the latest info. If you’re looking to jump on a party boat this weekend, your best bet is still a 1 1/2 day trip or longer. The fish the Tribute had yesterday bit late in the day and while 60 miles is easily doable on an overnight trip, those boats would have been on their way home prior to the bite time. There are lots of trips online this weekend and through the 4th of July holiday weekend, so check with the landing to find one that best fits your schedule. And please remember to bring a heavy set up on any of the longer trips in case you run into a school of those big bluefin. The Coronado Islands are still kicking out yellowtail for the 3/4-day boats as well as private boaters. These fish have had plenty of time to settle in at the island and are spread around, so private boaters don’t need to follow the fleet to get bit. Instead, try finding some water that you can have you yourself and slow troll mackerel while looking for conditions that look fishy. Sport boat fishermen should try and fish mid week if at all possible. The boat will probably be less crowded, but more importantly you’ll have a shot at catching more fish because there will be less uninformed private boaters there to chop you up all day.

The calico bite is excellent in the kelp from Point Loma to Newport Beach and fish are being caught on both live bait and artificial lures. If you want to catch numbers, I’d pick up a tank of anchovies and fish the outer edges of major beds. The fish are moving into their spawning pattern and should be stacked up on the deeper kelp edges for the next few weeks. You’ve always got a chance at bigger fish in those zones, but most of the fish you’re going to catch will be less than 2 pounds.

If you’re looking to catch bigger fish, try throwing a weedless swimbait, the surface iron or a Waxwing in shallower water with isolated patches of kelp. This type of fishing necessitates finding conditions and then properly positioning your boat to make pinpoint casts. In other words, it can be a lot of work. So if you’re looking to have a relaxing day of fishing, I’d stick to setting up on a kelp bed with a tank of bait. Not much has changed at Catalina Island in the last week. There are still some scattered yellowtail on both sides of the island, the bass bite is good on the back and there are barracuda all over the front. Despite the volume of fish at the island, the fishing is just so-so for anything other than calicos. If you’re looking to catch a big seabass or yellowtail this weekend, San Clemente Island is the place you’ll want to be. The island hasn’t gotten a lot of coverage this week except from the Thunderbird out of Davey’s Locker. Captain Jeff Markland has been putting his passengers on a handful of yellows and seabass almost every day and the fish have been giant with fish to 40-pounds being caught. The barracuda bite along the coast has been hit and miss from Huntington Beach to the Santa Monica Bay. It seems like one day they’ll bite and the next day they won’t. The best fishing has been late in the day, so if you want to catch gar, I’d recommend jumping on an afternoon half-day trip. Up north, the Channel Islands continue to kick out a steady stream of seabass, yellowtail and giant halibut. The weather has been up all week in that zone, so boats have been tucked into the backside of Santa Cruz Island, but are still catching plenty of fish. With the forecast calling for less wind this weekend, the fleet should spread out a bit and several boats will probably head to Santa Rosa, which has kicked out some big seabass scores in the last few weeks.