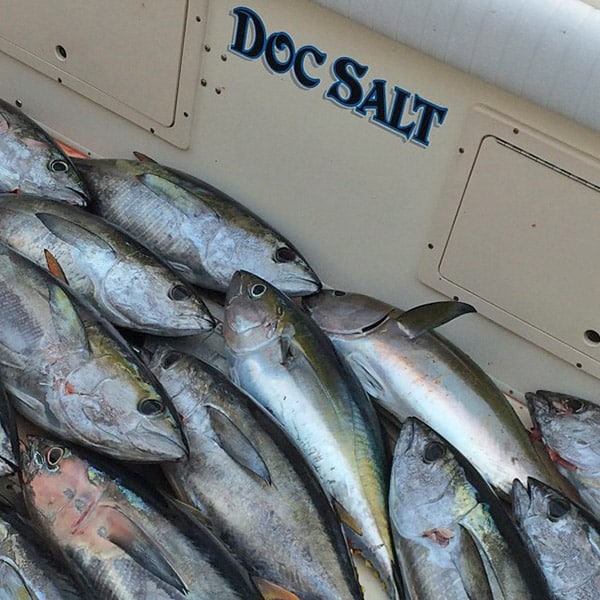 The San Diego tuna season officially kicked into high gear this past week with both sport boats and private boaters getting in on the action. With fish spread from just outside the Coronado Islands to almost 100 miles south, there are enough fish staged below us to keep rods bent for the next few months. As an added bonus, there is also a decent volume of fish already in U.S. waters.

The first I heard of the local fish was when my friend John Curry called to let me know he’d run over a school of breaking yellowfin on his way home from bass fishing at San Clemente Island on Sunday. While John didn’t have any bait and couldn’t get them to bite a jig, another boat caught several fish on live squid that same day. Since then, boats have been making the occasional scores on yellowfin, bluefin and kelp paddy yellows in that same area; but all of them have reported seeing a lot more fish than they are catching. If you’re interested in taking a look in that area, your best bet is checking www.fishdope.com for the latest report before you head out because it’s a small area of fish that seem to be moving around quite a bit. A better bet for private boaters is to launch out of San Diego and check out west of the Coronados or down the beach. There have been lots of fish scattered in the 25 to 40 mile range and those fish are being left alone by the sport boat fleet for the most part.

Several of the four and six pack boats out of San Diego have been fishing in this zone and getting some quality fish including the Sauerfish who caught both yellowfin and yellowtail on a 3/4 day trip this week. Captain Duane Mellor on the 4-pack Seasons got on the fish earlier this week as well and ended the day with limits of yellowfin for his group. For sport boat anglers, the overnight boats out of San Diego have been getting on the fish, but the best numbers have been coming on the 1 1/2 day trips. The New Lo-An returned Tuesday from a 1 1/2 day trip that produced limits of yellowfin and near limits of yellowtail for its 16 passengers. Included in that count was several yellows in the 25-pound class, so they aren’t your standard paddy micro tails. There have also been some big bluefin in the 1 1/2 day zone and the Pacific Queen managed a 90-pound fish during a recent trip.

I spoke with Eric Noguchi who was on the New Lo-An this week and he reported almost all of their fish coming on fly-lined anchovies. He recommended that anyone planning a trip in the near future bring tackle that’s appropriate for fishing small bait. That means you’re going to want something that’s light enough to fly-line a chovy but strong enough to land a 20 to 30 pound fish.

The subject of using anchovies as bait has been a hot topic on our message boards the last few months and I’ve read several posts complaining about how difficult it is to fish with an anchovy. One poster had this to say about his recent trip,

“Then the captain comes down for the usual seminar and proceeds to tell us all how wonderful anchovies were and that they catch buckets full of tuna. Yes I am sure they can be wonderful but not on this trip. Tried fishing with them several times. #4 hook to 20lb fluoro to 30 lb spectra. Cast the little bugger out and after about 30 seconds of pulling they just pooped out and croaked. 20 is just too heavy.”

The poster was both right and wrong. Yes, anchovies are excellent bait, but 20-pound test is not too heavy. The reality is that most of us have been completely spoiled by using sardines as bait for the last ten years as they are one of the most forgiving baits you’ll find. You can go to the tank, grab the worst looking dean, pin it on the hook incorrectly, overhead cast it (with a slap down at the end) and it will still usually swim away with your line.

Anchovies on the other hand take a bit of finesse in choosing, handling and presenting.

But that doesn’t mean you need to use light line. Hell, I’ve caught fish while fly-lining anchovies with a Trinidad 16 or Penn Fathom 25N full of 65-pound spectra tied to a 40-pound leader; you just need to learn how to properly present your bait. The first step in correctly fishing an anchovy is to select the right bait. That means taking a few seconds to look at what’s in the hand well and picking the strongest swimmer. Sometimes that can be as simple as choosing the biggest one, but other times you’ll have to look for less obvious clues, like the bait’s coloration and behavior. Just pay attention to what the bait you grab looks like, see how it performs and then base your next bait choice on your observations.

Once you’ve chosen a bait, lightly collar hook it on an appropriately sized hook. By collar hooking it, you can keep tension on the bait and urge it to swim away from the boat. There are other more advanced ways to hook a chovy, like butt hooking it, but if you’re just learning to fish with one, stick to collar hooking it for every application except fishing the slide (then nose hook it).

Casting chovies is the most difficult part because you’ll need them to land softly in the water. So, if you can’t get your bait to land softly when you cast, you’re honestly better off dropping it straight down and letting it swim away from the boat. The best possible cast for anchovies is the forward pendulum cast. This is an extremely advanced casting technique but since you’re going to be fishing with chovies the next few years, it’s worth trying to learn it. You’re not going to get a ton of distance with this cast, maybe 30 feet at best, but your bait is going to slide into the water and take off swimming. For more information on how to perform this cast, you can check out videos of freshwater bass guys pitching baits. The trick is to keep the bait low to the water throughout the entire cast. So when you do it, focus on keeping the bait low instead of getting a bunch of distance.

The final step is knowing when to change your bait. As the poster mentioned, the anchovy would get worn out after 30 seconds of swimming and that’s about right. Regardless of what bait you’re fishing, if you’ve had it out there for over a minute it’s too long in my opinion.

The fish this year will be keyed in on the anchovies that the crew is chumming, which unlike sardines will not race off once they hit the water. So, you’re going to want to fish your bait in the zone where the chum is and if you let it keep drifting for more than a minute or two, it’s going to be out of the bite zone anyway.