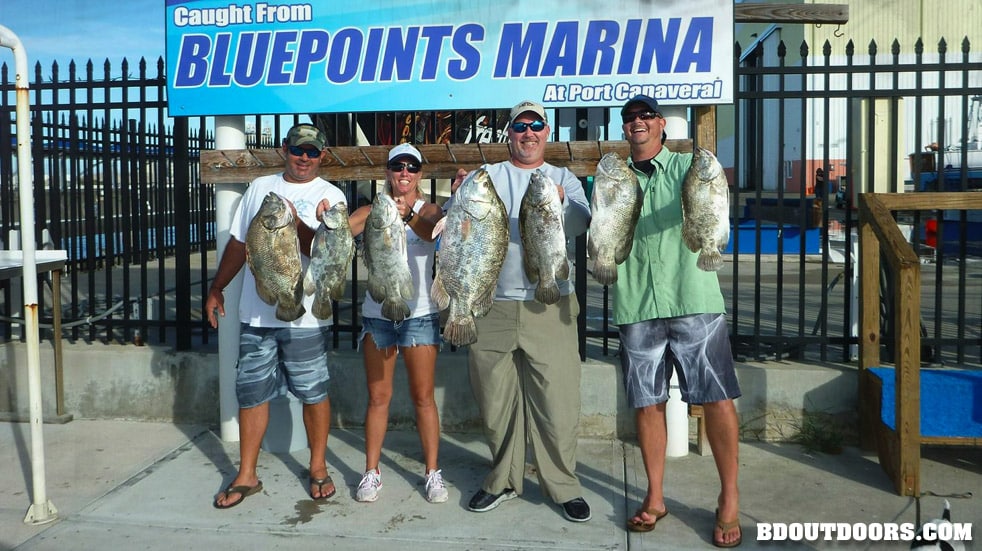 Triple the treat, Good friends, perfect weather and great fishing! Recently I got a spur of the moment offer to hit the water with Brad Spalding of the charter boat Brassy Hooker out of Port Canaveral, Florida. After weeks of high winds in November, a window of summertime weather was happening in December. My Dad always said, â€œYou can’t beat Floridaâ€, and it was stated during times like these. Many large weed patches and mats had blown inshore during the blow. We went from one patch to the next, probing them with light spinning tackle and shrimp and minnow imitating soft baits tipped with a tiny piece of squid. Our target was tripletail, a unique fish that loves to hang out under anything floating and around fixed structures like buoys. They are great fighting and even better eating. The weather could not have been better for sightfishing. Good polarized glasses like my Costas are imperative for cutting the glare and seeing the subtle signs of a fin or nose protruding from the weeds. I’ve always described the tripletail as looking like a prehistoric crappie. They can be the most willing eater or they can refuse even their most favorite bait, live shrimp. Having a dip net is advised for landing tripletail of any size. They have very tough scales that make gaffing sketchy. So many times you hit them hard with the hook and come up with only a scale. Netting works best! A bucket can be used in a pinch if you get the timing right and scoop them up. Cory picks off a nice one. â€œTailsâ€ as we fondly call them have a minimum size of 15 inches and a bag limit of two per person in Florida. Just because you don’t see a tripletail sitting under an object, does not mean he is below it just out of sight. Drop a bait down and check any substantial debris. This 15 pounder was a treat and is a good one, but they do grow over 30 pounds. Derek Redwine is working the edges of this giant weed mat looking to draw tripletail out from underneath. We work the baits slowly because the tails are not real fast in their approach. Sometimes the bait has to brush their lips to get a response. But when they grab it, it is all worth it! Derek likes to fish a soft plastic swimbait for tripletail because he can slow the presentation down to a crawl to give the slow moving tails a chance to make their move. Often the tripletail will be in groups and multiple hook ups are not uncommon. The big ones tend to be hesitant, while the throwbacks are much more aggressive. Not bad for a three-hour tour, we did also encounter a big cobia that ate with gusto, but quickly pulled the hook on it. Thank goodness the tails helped distract us from that disappointment. Thanks to Brad as well for showing us a great time. Tripletail are one of our favorites to eat. Derek and Cory rave about the sashimi it makes and I like it cooked any way you can. It is a white meat and very much like snapper. Hard to beat.