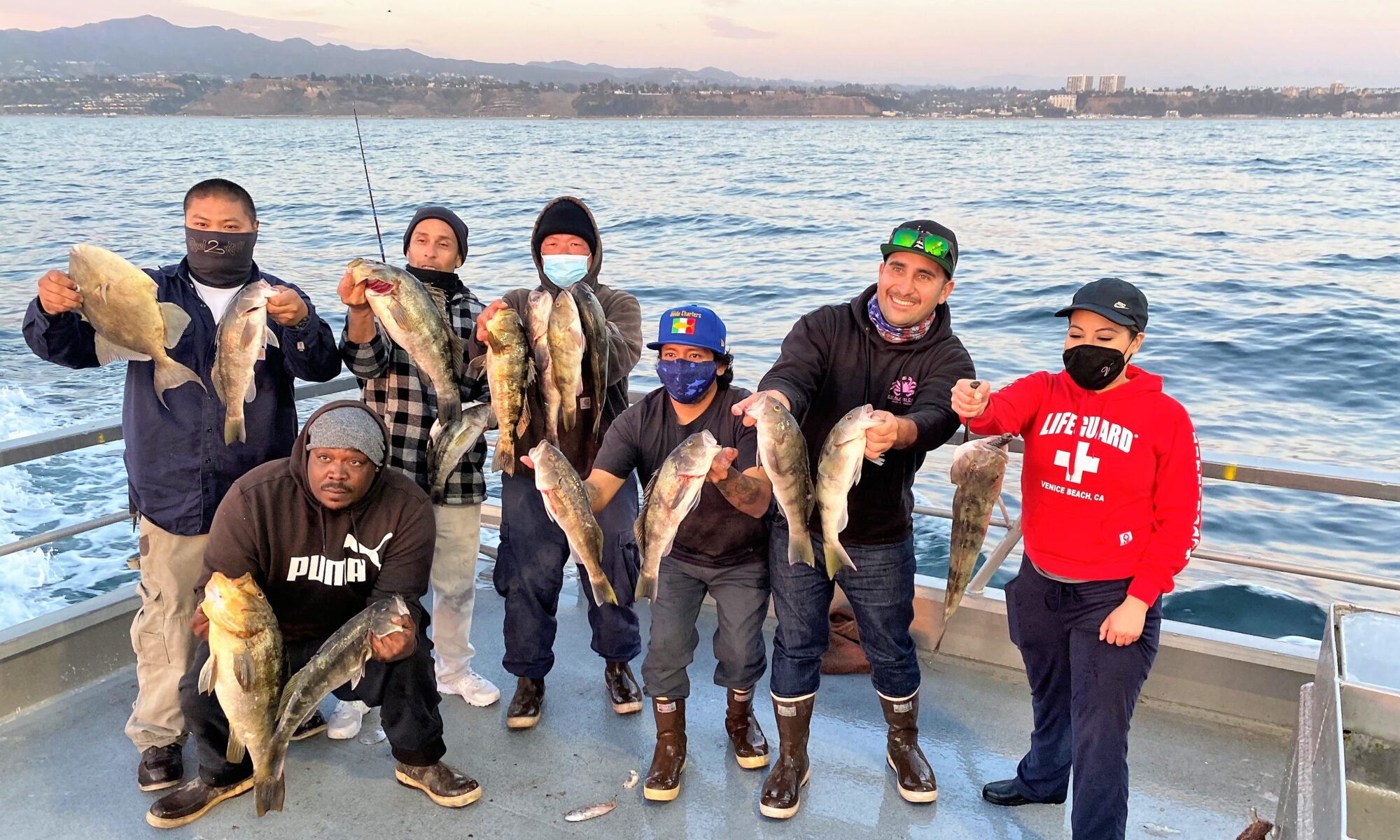 I mentioned in my Fishing Resolutions article last week, how one thing I resolved to do more of in 2021 was work on my winter bass game.  This time of year, the water is colder and the bass are hunkering down near structure.  The lower water temperature makes them kind of sluggish.  You need to match their tempo and fish slowly too. 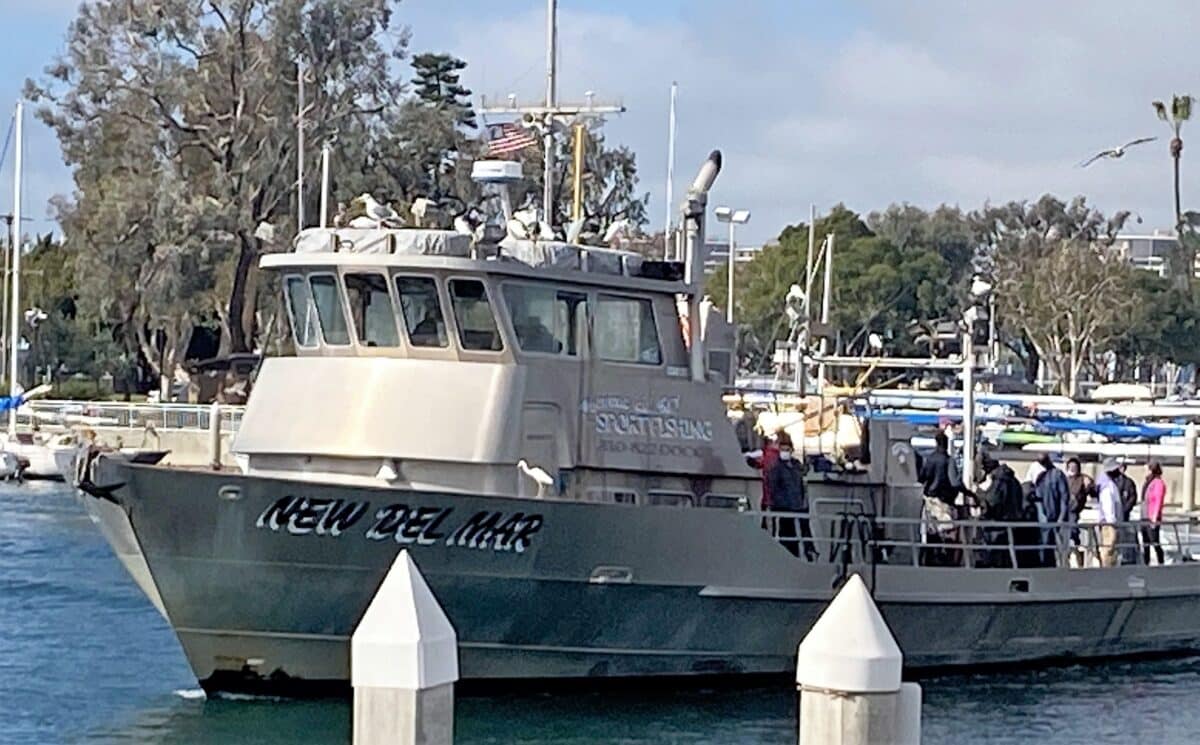 The New Del Mar is the half-day boat out of Marina del Rey Sportfishing.  Yesterday (Monday, Jan 4th), I boarded the boat for the afternoon ride with Capt. Danny Ericson.  Eric Ullman was working deck and Kaley was in the galley.  A bunch of former and other MDR boat crewmembers were riding as passengers.  One of the regulars told me they enjoyed good sculpin fishing on the morning run, but the bass fishing was slow…only 10 legals for the boat total.  Oh well, I was just happy to be back in SoCal and on the water for my first trip of the year.

Typically, these trips will go and target sculpin first before trying for bass.  Put fish in the sacks.  Make sure people have some meat to take home.  I don’t know if Danny made a call based on the number of sticks on the boat, but we skipped specifically targeting sculpin and made a long run up the beach to target bass from the start.

That decision made rigging up super simple…leadheads and squid. 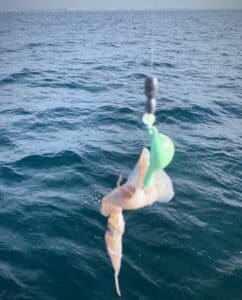 I only brought 2 rods: a light rod (Fishing Syndicate FSG 800XL rated 10-25#) and a little heavier one (FSC 800L, rated 15-30#, but fishes heavier).  I had a Tranx 400HG with a power handle on the light rod, and a Trinidad 14A on the heavier one.  Both had braid to a short topshot.  I tipped 40# mono on the heavy setup on the recommendation of Axel Enriquez (former MDR deckhand).  The Tranx was tipped already with 50# fluoro leftover from fishing a vertical jig while shallow water rockfishing, so I left it.  You want to go heavy on your leader because of the rocky environment where these fish are this time of year.  I put a couple of extra sliders on the heavier setup, for weight and to make a little noise.  The lighter one I tied straight to the leadhead. 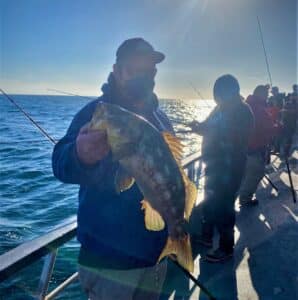 At the first stop, I may have gotten the first fish on board, a legal sculpin.  Good start.  We hung out there for a while.  It was a slow, but steady pick.  I picked up a short sculpin before breaking the ice with my first bass of 2021.  There were a couple of nicer models I saw get caught.  Capt. Danny was fishing a couple of spots to my right and he pulled in a nice calico that we took a picture of before he released it.  After that happened, things kind of slowed down and Danny decided to make a move.

On the move, I took time to re-rig.  I had lost my leadhead on the heavier rod, so I decided to change up the rigging on it to a Carolina rig with a short (about 8”) leader to a 3/0 Aki twist hook.  My thought being, maybe the bait waving around just above the bottom might be a nice change-up presentation to spark a bite.  I added one slider on the lighter setup for the weight.  I fished the heavier setup for a bit until it got caught in the reef and I had to break it off.  Light setup time.  We were only in about 70-feet of water, but I was a little worried about the light rod given the structure.  I guess we’d find out.

That combination proved to be lethal. 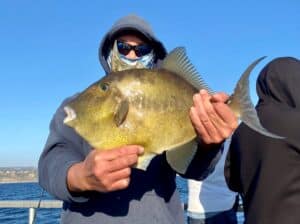 I picked up my first ever triggerfish (right), filled out my limit of 5 sculpin, and got 2 more bass.  One of my bass was a nicer model.  It paled though in comparison to some of the other bass caught in that second spot.  I liked the feel of the lighter rod.  Being 100% graphite, it had a light, sensitive stiffness to it.  Having the line guide of the Tranx was nice and the higher gear ratio worked really well in this application.

The whole goal of this type of fishing is to go slow until you find the structure and start to get some attention.  Then just be still and wait.  You’ll get perch pecks while you’re sitting there.  Ignore them.  You’re waiting for a bigger fish to notice the goings on and takeover.

Once a fish commits…set hard!

You have to win that first couple of feet quickly so as to not allow them to break you off in the rocks.  Fish your drag tight.  The faster gear ratio of the Tranx made a useful difference and the rod was fun to fight the fish on.  I just didn’t want to bounce them as I normally would and potentially break it.

Everyone was arrayed on the port side of the boat.  I was set up near the bait tank.  One angler was hanging out by himself on the stern.  I heard him yell for a gaff and looked down the rail.  I thought maybe he got lucky and hooked a halibut.  Eric stuck it and pulled it over the rail.  Whoa!  Angler Marcus Raimey (below) clearly won the jackpot with that fish.  Eric estimated it was somewhere north of 6-pounds, maybe 7. 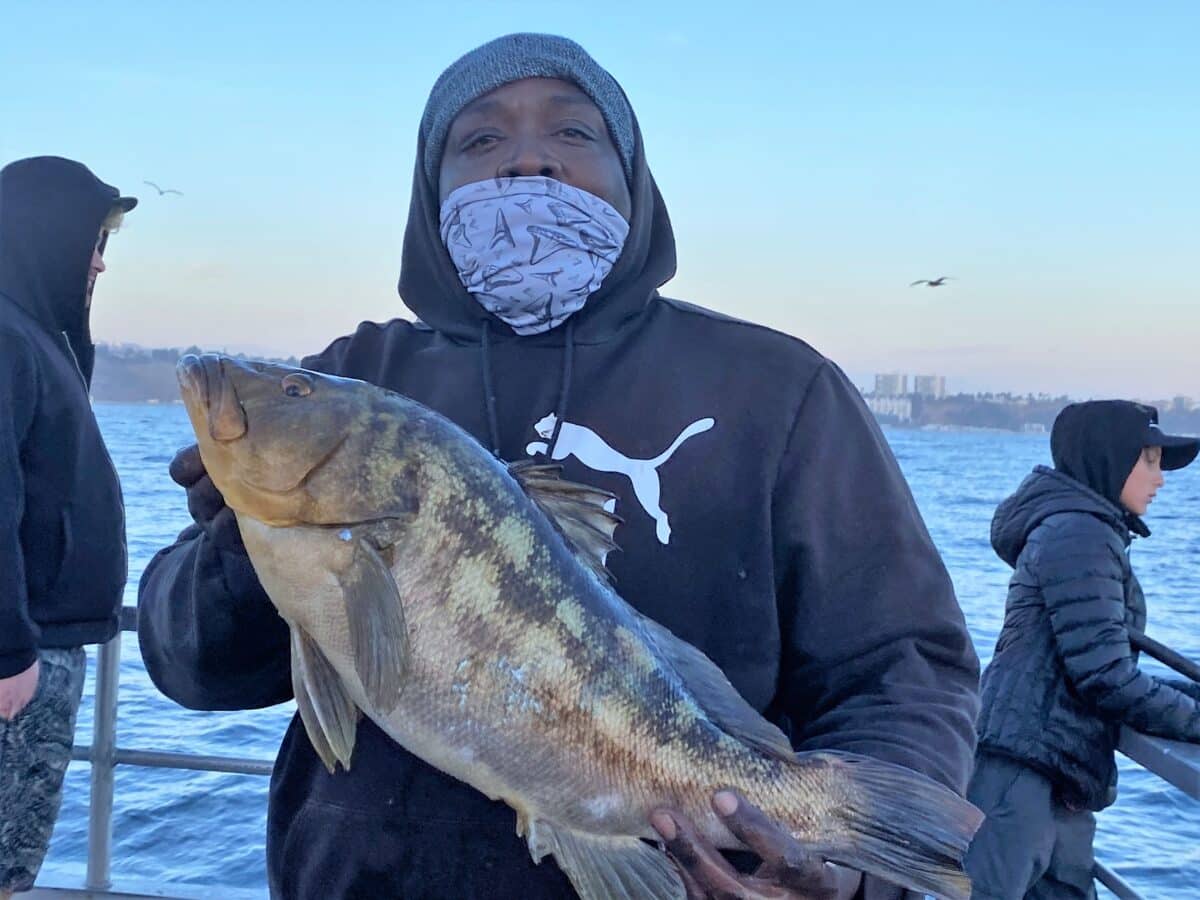 That was the trip.  Really productive day and just the ticket to kick off my year.  I figured out some finer points that I’ll use next round to optimize my setup, so it was useful in that regard as well.

Thanks to Danny, Eric, and Kaley for a nice day on the water.  Good luck if you get out there. 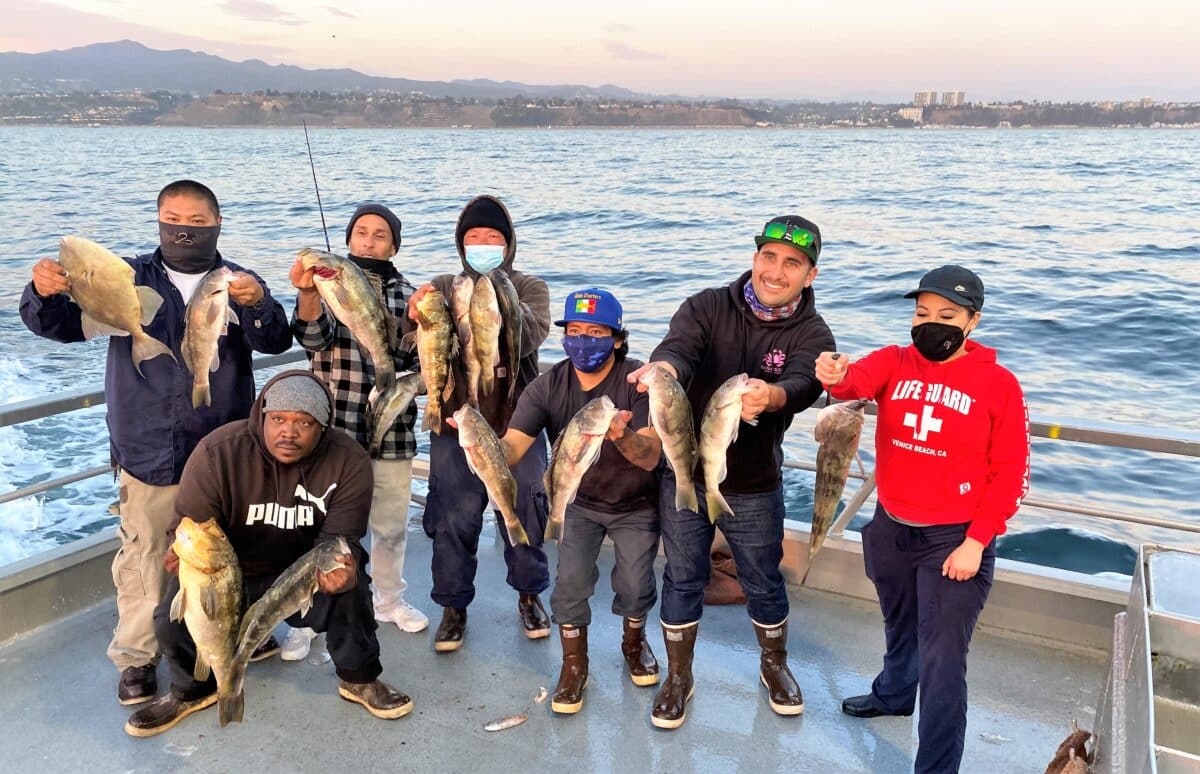 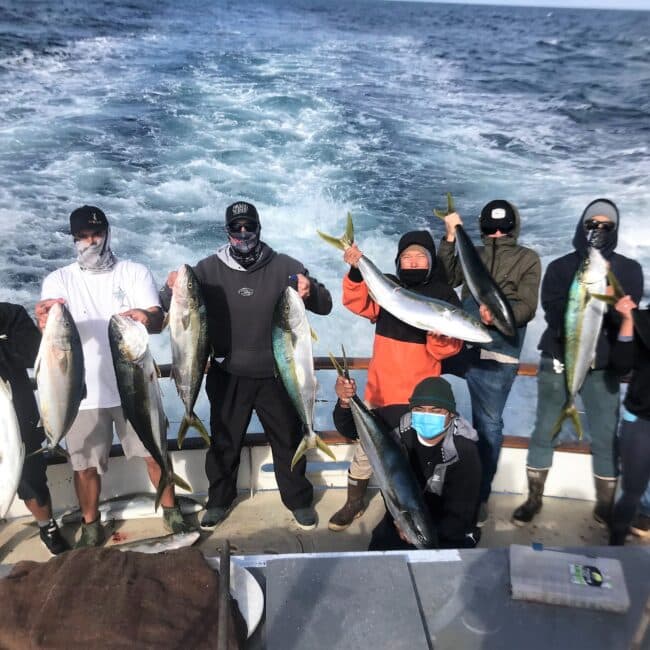 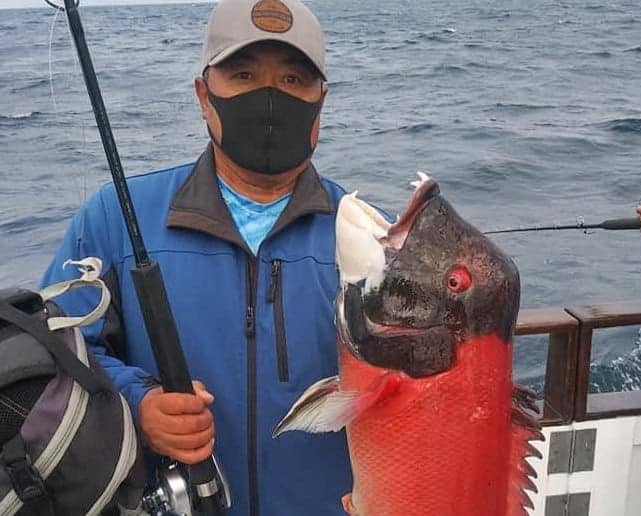