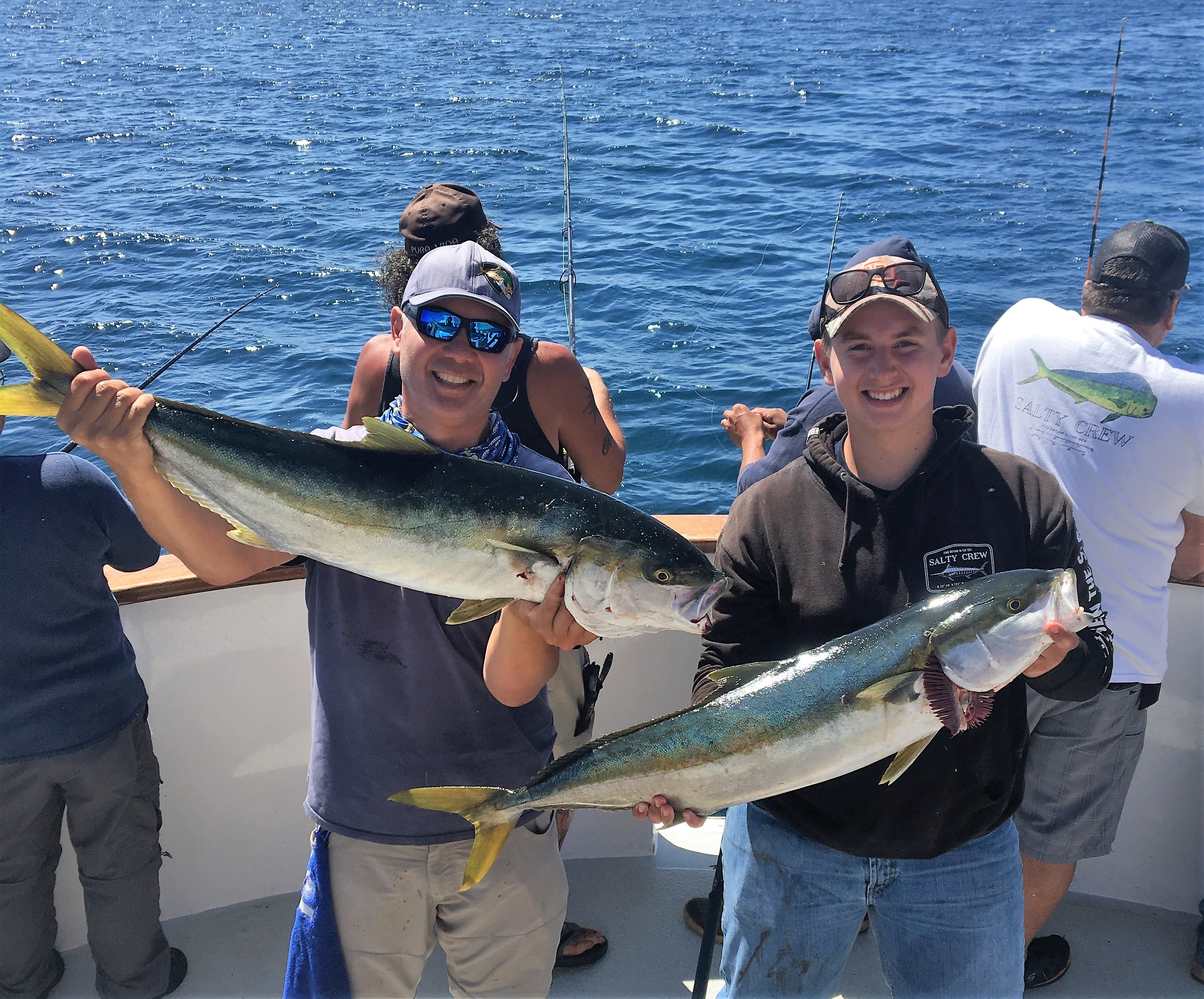 It had been a while since I’d been on the boat. The last time was on Mother’s Day. That trip was a roller coaster ride of emotions. I found out about my father’s passing, yet I felt he was smiling down on me when at the end of the trip I somehow ended up winning the jackpot.

I’ve tried to get back on since. Capt. Jeff Walker has had a pretty decent run finding yellowtail. Between the boat being full or chartered up, and my own schedule interfering with fishing, I just haven’t had a chance to get back. That changed last Friday (August 2nd).

Jeff told me the front side of Catalina was consistently in the 70’s (water temperature) and had been producing both yellowtail, calico bass, and even a few white seabass. However, the last week or so had really slowed down. He wanted to explore around the island, get away from the rest of the fleet, and see what he could find. After loading up on bait (live sardines), we set off to see what the island would reveal to us.

I didn’t realize the water was that warm, this far north. The Clemente out of Dana Wharf got a dodo on a 3/4-day trip last week, but the thought hadn’t even occurred to me that the ride across the channel might be anything more than a boat ride. The guys set out a troller just in case. Other than seeing a couple flying fish though, the ride across didn’t produce any surprises.

While we traveled across and I daydreamed we’d get stopped on a kelp paddy, I rigged up 3 setups: surface iron, 20# bait, and a small yo-yo rig.

As we approached the island, we headed along the length of the island toward the East End. By the quarry, we found the Freelance anchored up with a small navy of skiffs nearby. They were set up mostly close to the kelp line, so we came in along the outside. As we did so, Jeff marked a school of yellows and instructed crewmember Anthony Ortiz to establish a chum line. We anchored up and immediately it was game on. I got picked up on my first bait, but somehow it didn’t stick. There were already a couple of anglers hooked up, so I hurried to get baited and cast out again.

Thirty seconds later, I was bit again. This time it stuck.

That school stuck for a little bit, but as soon as the skiffs saw we were catching, they got on us pretty quick and scattered the school. The day was already made though with 20 yellows hitting the deck for 50 anglers on the boat.

Jeff proceeded to get on with his original idea of getting away from the fleet and checking out the rest of the island. We made our way around the East End. After a couple of quick, nothing stops, we made a long move out to the Farnsworth Bank. Jeff metered a sonar school below us. I noticed a kid who was rigged up with a double dropper and a pyramid sinker. I watched him pin 2 sardines on and drop straight in. Wouldn’t you know it, he got bit. The kid was already struggling, but then he got absolutely smoked. Anthony guessed his yellow got eaten by a black seabass. Tough break.

After settling in on the anchor, we saw a lot of boiling fish. Opportunities were there to catch fish on surface iron. I had a couple of shots off the bow that had a chance, but nothing connected. It was mostly show and little go, but Captain Jeff stuck an absolute pig that dropped everyone’s jaw before we moved on.

At that point it was getting late in the day. Jeff made one last move toward the West End of the island and we settled into a spot close to the kelp line. I figured he wanted to give people an opportunity to catch a few bass or bottom grabbers before calling it a day. I long soaked a sardine on my 20# setup. It eventually got bit and I reeled it in for a short bass. On my next cast, it didn’t take as long to get bit. I figured it was only another bass because it didn’t pull that hard on the initial strike. I came tight and the rod really started to load up. I awoke the beast and it started peeling out line. Jeff was watching me and remarked later that I totally got lucky it didn’t take me right back into the kelp. Instead, it ran parallel to the kelp line and dragged me up toward the bow. After a brief moment where we feared it might wrap on the anchor line, I got it around to the gate area where Jeff stuck it.

Damn, it was a nicer fish!

It was clearly bigger than the rest of the yellows on the boat. The only one close was Jeff’s big surface iron fish. Another angler had a spring scale and it weighed out at 31-pounds. For laughs, someone put Jeff’s and my fish on the jackpot scale. They told me mine barely edged out Jeff’s fish. What a trip! Thanks to Jeff and the crew for an action-packed day on the water. The final count was 24 yellowtail, 21 calico bass, 5 whitefish, 2 barracuda, and 1 sheephead for 50 anglers.

There’s a lot of fish out at the island, so the opportunity is definitely there. Good luck if you get out there.