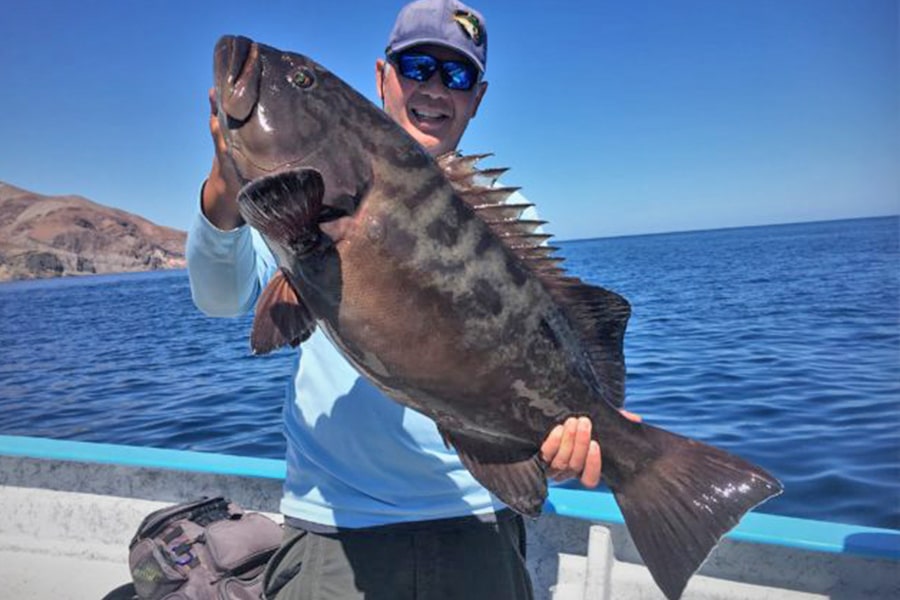 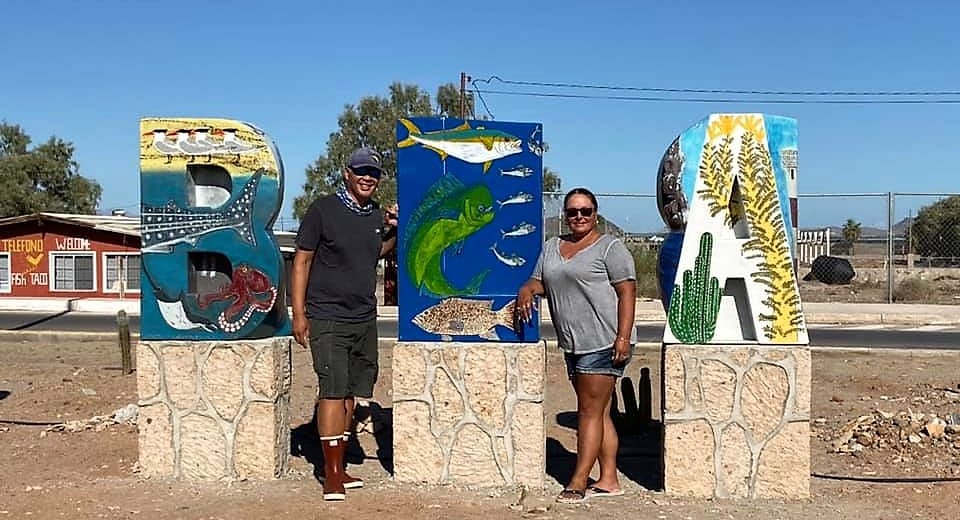 If you missed Part I, you’ll find it HERE.

So a quick note about the care of our fish.  Capt. Joel Prieto Jr. had a big Yeti cooler strapped onto the back of the boat.  Inside he mixed a slurry of ice and saltwater in order to keep our fish in prime condition during our fishing day.  We were instructed to bring our own freezer bags, and after Joel cut our fish, they were bagged and returned to the cooler.  Once we arrived back at the launch area, Orchid was there to meet us with icy coolers to take our catch back to the walk-in freezer at our hotel.  When it was all said and done, I was very pleased with the quality of the filets I ultimately took home with me. 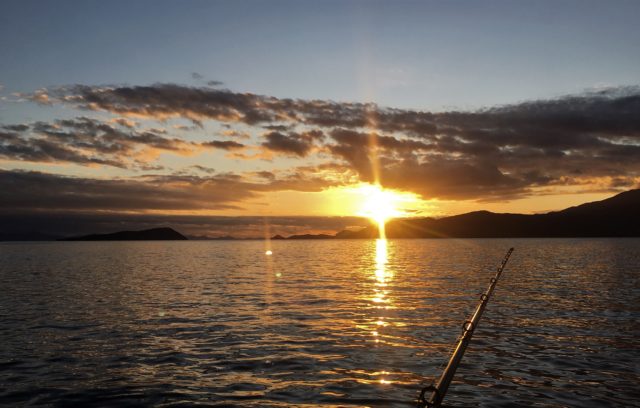 In the pre-dawn hours as I walked from my room to the “casita” where Yoli prepared and served our group meals, I noticed that the moon was on the cusp of a new moon phase.

Immediately my thoughts went to, “good time to target seabass.” 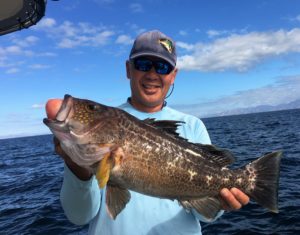 Little did I know that’s what Joel had in mind for our day.  Once we went through our normal bait making routine, we headed back toward the same area as the pinnacles where we targeted the hard fighting yellowtail of Day 1.  This time though, we went a little shallower, above a reef, to target the seabass.  In terms of gear, we fished it exactly the same as the yellowtail from the first day.  The only difference was Joel rigged the line down to the lead weight longer so that we could keep our baits above the other hungry reef fish.  On my first bait, I could feel some interest.  There was the telltale nervousness of the bait itself, and a slight heaviness that left me waiting for the actual bite that never materialized.  I went to check my bait and there were teeth marks on the bottom third of the bait.  “Seabass!”  Joel said.  It was good to know that our target fish was around.  I dropped a new bait in and got bit.  Reeling up though, there wasn’t any fight.  Nicer Goldenspotted Bass (aka pinto), but not the target species. 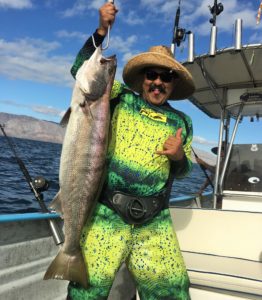 I ended up catching a couple more yellows, but never got the “right” bite.  It was interesting though, the yellows in this spot were more normal to what I was used to at home (in terms of fight vs. the pinnacle prison yellows).

Luckily though, Mario did get the right bite and pulled in the only white seabass (on our boat) from our morning session.  We’d learn later that another angler in our tour group got another wsb on a different boat and a third got one on our last day.

Once that window of opportunity ended, it started to get windy.  Joel’s response to the change in condition was to take us tight to some of the islands to fish the boiler rocks.

I stuck with the small Candy Bar surface iron setup that I caught the yellows on the previous day.  I brought some swimbaits but was having good success on the iron, so I never used them.  I was wishing I would’ve brought some shallow diving hard baits, so that’s something to think about for future trips.

This part of the trip was super fun!  Long casts over the shallow rocks, slow wind over the top.

The water was super clear…like fishing in an aquarium. 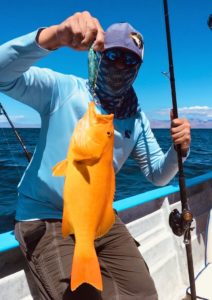 I had a lot of followers on needlefish, but could never get one to go.  I got plenty of other species to bite though: triggerfish, leopard grouper, yellowtail, and then the trophy catch of the day…La Reina (the Queen) aka the Golden Grouper.  The leopard and golden are the same fish, but the golden is a rare color phase.  Lucky me.  It was another great day on the water.

Our last fishing day was Friday (Sept. 27th).  There was noticeably more traffic at the launch ramp and nearshore making bait.  Joel anticipated the heavier weekend traffic and saved this day to get away from the masses to target big Gulf Grouper.

For this final day of fishing, we headed north, past the barrier islands protecting BoLA proper. 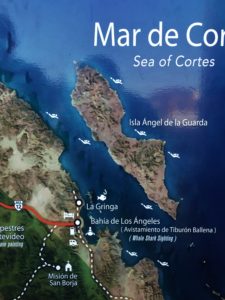 It was a long drive.  Along the way we saw some birds working, fish getting pushed up on the surface, other signs of fishiness, but we didn’t stop to look at any of it.

For this phase of the fishing, we stayed pretty shallow, not much over 100 feet.  Same as the previous day, Joel tied the bottom end of the rig longer to keep higher up off the reef.  We’d soon find out why.  There were tons of very aggressive triggerfish below that would absolutely wreck our baits.  Luckily we had plenty.  The one change in terms of rigging was an upgrade of our leader line to 130#.  You’d think fishing that heavy would be more than plenty.  Again, I was wrong.

Renee was the first to experience the gut-punch of a big grouper bite.  One minute you’re standing there joking around.  The next you’re doubled over, hanging onto your rod for dear life.  The fish won and got back in its cave.

Seeing this happen put us all on edge.

We fished with tight drags.  Joel warned that it was critical to win the first 10-feet of the battle…be ready on that big initial hit, hope everything holds, and immediately try to put some line on the spool to keep these mighty fish from getting back in their hole.  I was happy to have the heavy setup that I brought specifically for this part of the trip (Seeker 775, and Makaira 16II).  I would soon get to experience a big gulf grouper for myself.  BOOM!  The gut punch.  “Wind wind wind!” Joel yelled at me.  My heavy rod was doubled over and it was all I could do to just hang on, much less take one hand off the rod to reel.

Wow!  I think I enjoy getting wrecked more than most.  That feeling of helplessness when you’ve hooked into something that powerful is a rare and thrilling experience.  Joel said that one was a 100-pounds plus easily.

Joel re-positioned the boat to give it another go.  Bites (the kind we wanted) were hard to come by…making it that much more difficult to stay engaged and ready for when it did.  Luckily, I got another one.  This time around, I was ready for what was about to happen.  I pulled hard and immediately tried to get some line back.  Once I was able to get some cranks and felt comfortable that I won that first 10-feet, I dropped into my low gear and winched the beast up.  It wasn’t a giant, but it was a solid 40-50-pound fish. 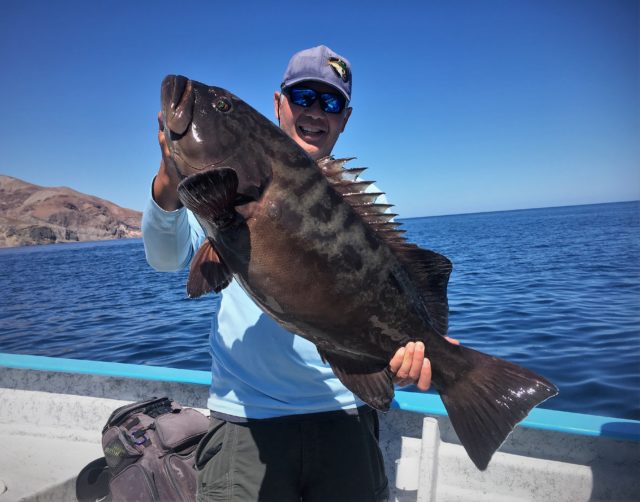 The limit on gulf grouper is one per day, so I was done.  Joel tried awhile longer to see if Mario or Renee could get one, but it didn’t happen.

From there we tucked in nearshore to go with the shallow surface action again.  This time around, I went with a bigger Krocodile (vs. the surface iron of the previous 2 days).  It turned out to be a good call.  Numerous leopard grouper and triggerfish were caught.  Lots of needlefish that didn’t want to go again.  We saw another golden grouper below, but couldn’t quite get it to go.

The highlight of this phase of the day was this “vieja” or Mexican Hog Fish…a member of the wrasse family, cousin to one of my favorites the California Sheephead (aka that damn fish).  This model is in its full male, terminal phase (so like a big black and red sheephead).

On the way home, we tried to troll for a while, hoping to get a dorado which was the fish that Renee was really hoping to catch.  We got one short bite, but that was the extent of it.  That was the end of our fishing trip.

On the last few miles before getting back to the dock, Renee commented,

“Wouldn’t it be cool to see a whale shark to top off the trip?”

As if on cue it happened.  We actually saw 4.  The biggest of which was about as long as the boat.  Just big gentle animals slurping up the abundant plankton in the rich waters of Bahia de Los Angeles.  I was took some video, and some of it turned out ok (below).

And that was it.  I really enjoyed my time there and am looking forward to a return trip.  The mixture of fishing styles and species kept things fresh over the course of 3 fishing days.  The whole experience set up by Baja Fishing Convoys was pretty seamless.  If you don’t have a friend who’s been doing it for years, BFC is definitely the right call to introduce you to this magical area.  Thanks so much to Orchid Martinez of BFC and Capt. Joel Prieto Jr. of Joel Sportfishing ([email protected]) for a really fantastic experience.  I highly recommend the destination and both operations.  Good luck if you get out there.