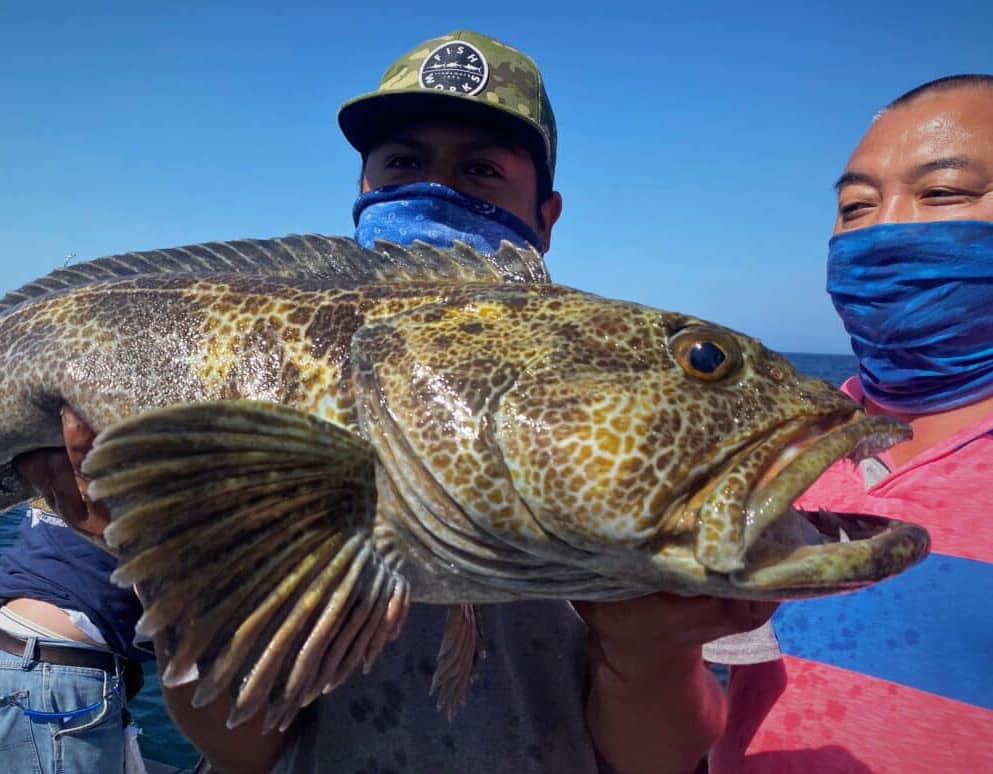 Whittier is my home base since all my gear is in storage there.  I got back from the weekend T-Bird adventure, dealt with my fish, switched out all my gear, and commenced to make my way up to the 805.

As things turned out, I was about an hour ahead of my buddy, Vance Contreras.  He found a deal on a spot in Goleta where we would stay before heading out Thursday morning (September 24th) on the Coral Sea out of Sea Landing in Santa Barbara, CA. 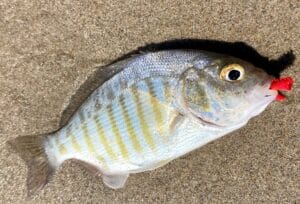 Since I needed to kill a little time, I made a stop at Emma Woods State Beach just north of Ventura.  I’d never been before, but I lucked out and happened to catch it on an incoming tide.  Found some micro crab beds that were unusable to make bait, but offered a clue there might be fish around.  Good guess.  I found a few perch to play using the new Berkley Gulp! fat hollow sandworms.  I was getting shortbit, so I pinched off a smaller piece to catch a few before moving on to Santa Barbara. 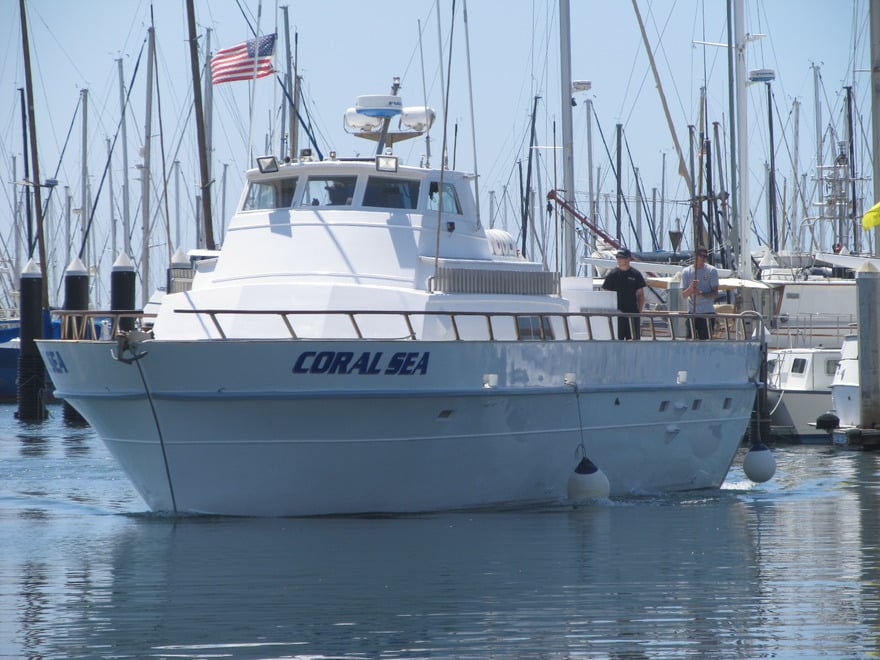 The next morning we boarded the boat for a 7 am departure.  I hadn’t been on it since it operated out of Oxnard.  The Diamond family brought it up here in 2015…

Why did I wait so long?

I forgot how much I liked the bow.  Very spacious and I love how the rails don’t flare out from the deck, making it easy to brace yourself on them while fishing or casting.  And they have bunks!  Captain Rafa Garcia said it would be about a 3-hour ride out to the front side of Santa Rosa island.  Long drive, but to put it in perspective, it’s an overnight trip from Oxnard/Ventura.  Plus, did I mention there are bunks?

I woke up 2 hours later.  Santa Rosa was within sight.  I started rigging up.  Deckboss Larry Spurlock told me we’d be fishing in 200-250-feet of water.  They rigged up the rent rods with 12-ounce double dropper loops.  I opted for a 9-ounce jig and fly rig for my main setup.  For my second setup, I double snelled two 4/0 Octopus hooks to trap rig a live bait.  I put the second setup in the rack and waited on the bow to start our fishing day. 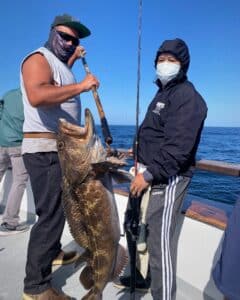 Rafa setup a drift in 250-feet of water.  Pretty hot start.  I picked up a nice chucklehead on my first drop.  Bit the plastic on my top hook.  One of the passengers fishing the conventional setup near us nailed a nice ling.  At the end of the drift, another guy caught a sand dab.  I asked him if he was going to use it.  He said no and gave it to me.

It gave me high hopes for the day.

As the day progressed, something became clear.  There was little to no current to push the drifts.  I was casting and dragging my jig and fly rig for modest success, but no lings…not even a short.  I knew better, but I gave the trap rig a go with the sand dab.  You need current for that rig to work properly.  There wasn’t, so it didn’t.

I finally gave in and tied a double dropper.

I tied it up with 25#.  There were some nice, larger size widow rockfish getting caught, I was all in on getting them.  I dropped to the bottom with the intention of counting five cranks up to where the widows were suspended…wouldn’t you know it, that’s when I got smashed with the right bite.  I got a couple of cranks on it before it had a burst and rocked me.  Ugh.  That turned out to be my best opportunity and I blew it.  We were close to rockfish limits at this point.  I went back to re-tie when I saw this happen… 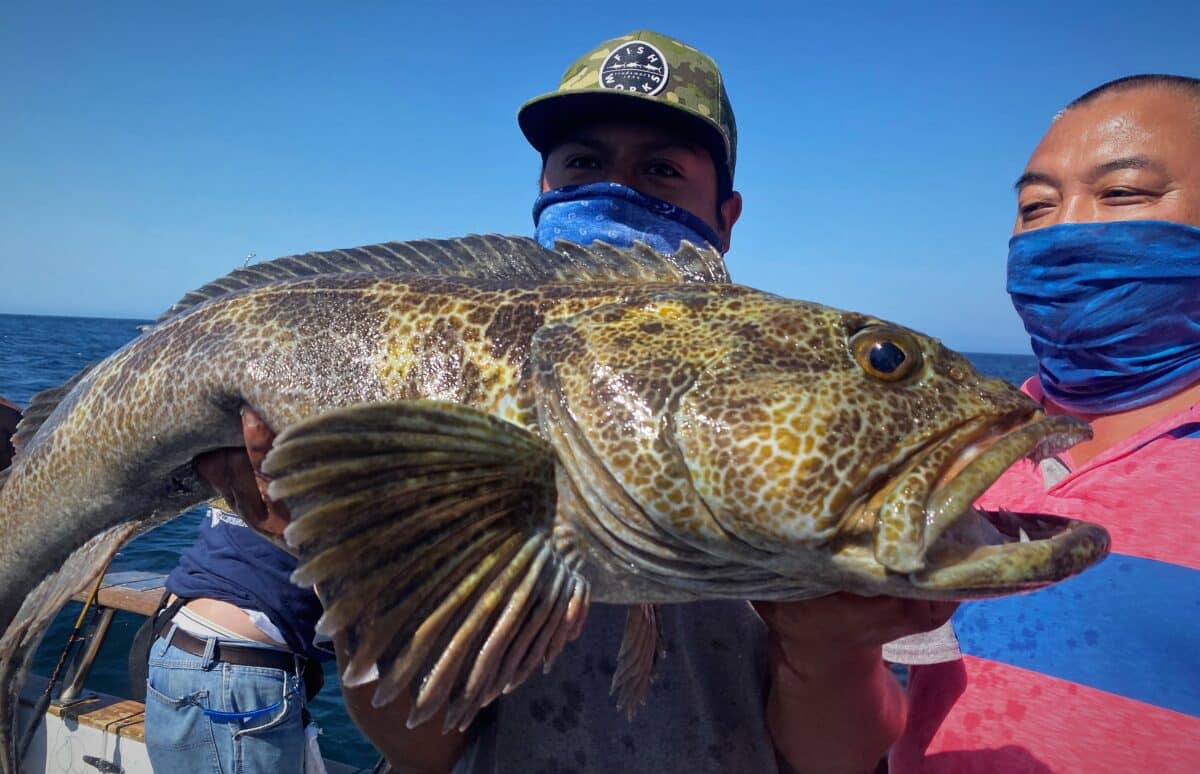 At that point, we were done with the deeper water, but not quite done.  We made a move into about a 100-feet of water.  We got into a ripper bite of larger-than-rat-yellow sized whitefish.  It was a blast fighting them on light tackle, sometimes two at a time.  That bite led to many 20 fish bags to end the day.

I went on this trip for an opportunity at big lings.  There were only 4 quality lings caught for the day, but I did get my opportunity.  Thanks to Capt. Rafa, crewmembers Larry, Josh and Martin, and boat owners Jaime and Jason Diamond for a fun day on the water.  They run a great operation up here.  I might have to give it another go when I’m down next.

Good luck if you get up there!