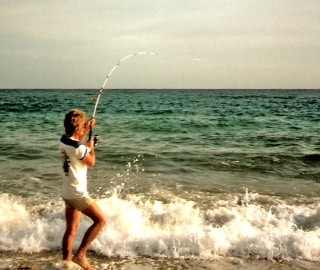 Our love of Baja was the foundation for an ongoing friendship that I enjoyed with Tom Miller until he passed away at age sixty-four.

Born April 4, 1928, Tom lived on Coronado Island, California. He and his brother, Chuck, fished together when they were young and both went on to become skilled with very light line (4- and 6-pound) setting several World Records. 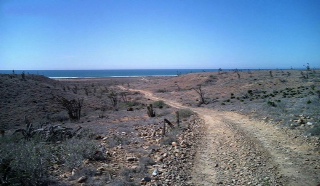 When the telephone rang in late 1977, I lifted it out of the cradle to hear, “Hey buddy,” the unmistakable effusive, greeting of my Baja buddy, Tom Miller, noted Baja enthusiast, author and WON columnist.

“I just received an assignment from the Mexican Government to do a survey of the fish camps in Baja Norte from Guerrero Negro to Ensenada. I’m leaving next week. Do you want to ride shotgun? We can squeeze in a little fishing along the way?” By this time, Tom and I had made several trips to Baja previously, so without hesitation, I replied, “Count me in.”

On the appointed day, Tom arrived at zero dark hundred in his 4WD Subaru wagon which didn’t have any room left by the time I loaded my tackle and gear. Off we went; next stop the border. In those days, “Customs’ Roulette” was not an option. Everyone got a red light and went to secondary for inspection. 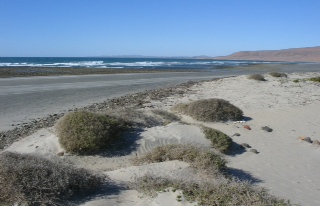 n a short time down the highway we went – Tom talking a mile a minute. One Baja story led to another. Time passed quickly and soon we had passed Ensenada and the turnoff to La Bufadora; we stopped at the dusty immigration office in Maneadero to have our travel permits stamped.

Now, it felt like the trip had officially begun! Our next stop was Mama Espinoza’s place in El Rosario. As we went through the southern equivalent of California’s San Joaquin Valley, there were cardboard shacks lining both sides of the highway, housing workers who were transported in rattletrap busses back and forth to work in the produce fields surrounding San Quintin.

“In the early years, her kitchen was the last frontier,” Tom said as he drove down the road winding snakelike toward the village of El Rosario (about a quarter of the way down to Los Cabos).

“Mama Espinosa has fed travelers lobster burritos and omelets at her kitchen table in El Rosario since long before the road was paved. She has dinosaur fossils that were found in this canyon over the years by her husband,” Tom continued, gesturing toward the rocky hills. 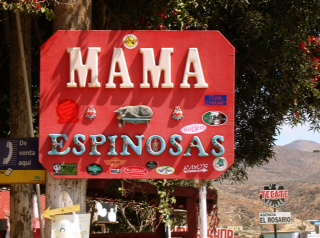 As we dug into our plates of steaming lobster burritos at Mama Espinoza’s, the Señora herself plopped down in a chair at our table, telling Tom that she had sold all his books he had left on his last trip. Of course Tom had a stash in the car and promised to replenish her supply before we left. Her attention then turned to me and she asked if I had seen her “Guest Book?” When I shook my head no, she brought it
to the table and opened it up. “Visitors have been signing this book since the 1940s,” she proudly explained. As I thumbed through the dusty, yellowed pages, it was like reading a who’s who of Baja travelers: Earle Stanley Gardner, Ray Cannon and Roscoe “Pappy” Hazard were only a few of the names that jumped off the pages at me.

Later that evening at our campsite near Punta Prieta, Tom and I sat watching the mesquite branches slowly burning down to glowing coals. Tom asked if I knew about the Huntington Beach Firemen’s
secret white sea bass spot. I told him that I had heard rumors that there was such a place, but nothing definite. “Well, we are going there on this trip,” he continued, “but you have to keep it a secret!”

“What is the name of the place?” I asked. 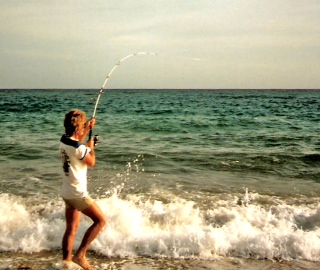 “Never mind, I will show it to you,” he responded. And he began telling me about a group of firemen and friends including Del Marsh who had been coming down several times a year to catch HUGE white sea bass from the beach. According to him, they brought a freezer full of squid to use for bait, then used the same freezer to haul their catch back home. They carried a generator to keep the freezer running; basically fishing around the clock and catching WSB 50-plus pounds, often several at a time.

Again, Tom had a wealth of Baja stories that continued well into the night until all that was left of the campfire were a few glowing embers.

The next morning, after some seriously strong coffee, we headed for El Tomatal. The beach still had bits and pieces of onyx scattered about, all that remained of the huge blocks that had been carved out of an old quarry a few miles inland, El Marmol. The blocks of onyx had been hauled down to the beach one at a time to be ferried to waiting ships. For us, it was the spotfin croaker and surf perch bite, not onyx, that we were seeking.

After satisfying our urge to fish in the suds and having caught enough fish for dinner, we headed down a barely discernible dirt road toward Tom’s promised WSB spot.

Tom’s 4WD Subaru performed well as he maneuvered it along the dirt track, weaving between various obstacles including cactus and boulders as large as the car. Other than a few jackrabbits and one lone coyote, we didn’t see another living thing as we continued down the shoreline with the Pacific surf on our right and Mex 1 only a few miles inland to our left.

After about 10 to 12 miles of dirt road, the sandy beach ended and turned into the rocky coastline of Morro Santo Domingo. With the surf crashing, the only visible signs of life were some sea birds darting to and fro with other long legged birds scampering around and pecking in the sand as the waves receded, exposing their dinner. Tom stopped the car, flung open the door and announced we had arrived. This would be our campsite!

In the mid-70s, Miller introduced me to Ray Cannon. Ray and his tales of Baja California that were published in Western Outdoor News stimulated Tom’s lifelong interest in Baja. Miller chronicled his own travels in a four-wheel-drive vehicle after Baja California’s 1,000-mile Mexico Highway, also known as Mex 1, was completed in 1973. When Cannon died in 1977, Tom was thrilled to be asked to take over the Baja column for WON. He continued the column until shortly before he passed away of lung cancer in 1993. 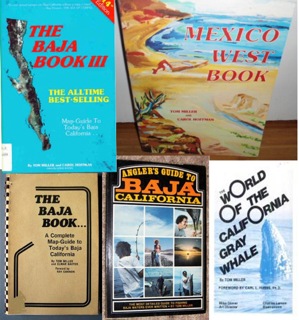 The Baja Book, A Complete Map Guide to Today’s Baja California with Elmar Baxter; self-published by their own Baja Trail Publications. Original book was tan and had a plastic binding so it would lay flat. This was the first commercial use of Space maps from NASA Earth Resources. Photos with overlays in a mile-by-mile road log of the highway and side road of the entire peninsula of Baja California and Baja California Sur. 1974

The World of the California Gray Whale. A small paperback book describing the different whales and other sea mammals found off the coast from Alaska to the tip of Baja California Sur. 1975

Angler’s Guide to Baja California, with many, many drawings and photos of fish found in Baja California. Illustrations by Charles Larson. Published by Baja Trail Publications, Inc. 1979
There is also a 1982 updated version of this book.

The Baja Book II with Elmar Baxter Published by Baja Trail Publications, Inc. 1979
In 1986 Updated versions of The Baja Book were published.

Baxter said the “Baja Book,” which was the first motorist’s hand guide for Baja, has sold more than 200,000 copies. 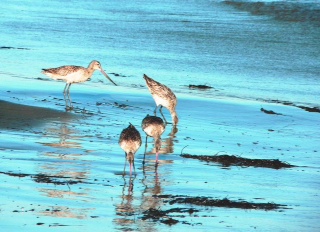 Along with his now deceased wife, Shirley Miller, and his partner Baxter, they started a newsletter, Mexico West!, which grew into Mexico West Travel Club with a membership of more than 2,500. Shirley and I were also close friends, often sharing our memories of Baja, and remained friends until her death.

Like Tom, my road-trips to Baja began soon after Mexican President Luis Echeverría Álvarez cut the ribbon in a ceremony held at Guerrero Negro in 1973, celebrating the joining of the two sections of the 1,000-mile trans-peninsular Highway, Mex 1.

(To be continued next column)