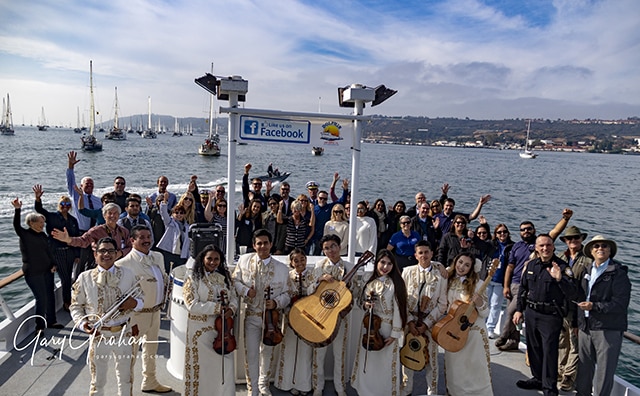 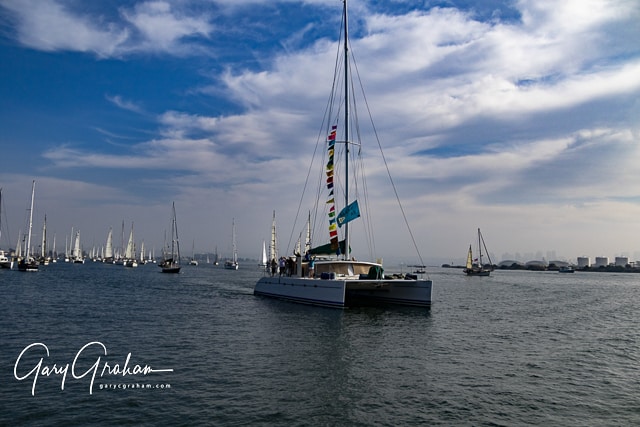 The largest sailing regatta on the West Coast, the Baja Ha Ha, gathered at the entrance of Shelter Island Harbor Basin, San Diego at 10 a.m. on October 29. 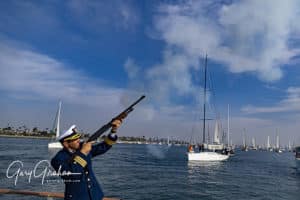 kicking off the 750-mile voyage from San Diego to Cabo San Lucas, Mexico.

The participants were aboard the colorful parade of ships of all descriptions and lengths, with some members of their crew still dressed in their costumes from the party the night before. 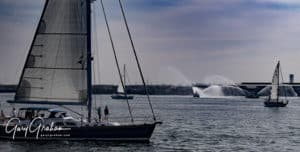 Plumes of water was sprayed by the San Diego fireboats as they followed behind and along side of the huge fleet of boats maneuvering for a better position. To their right was the Committee Boat, the Dolphin, where cameras were clicking and guests and spectators were waving and cheering to the crews as they passed by. 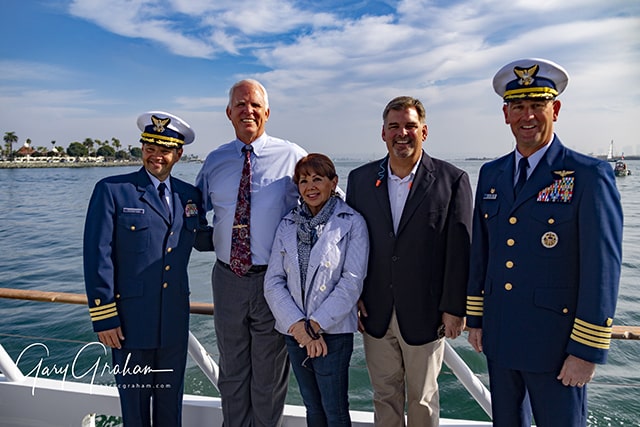 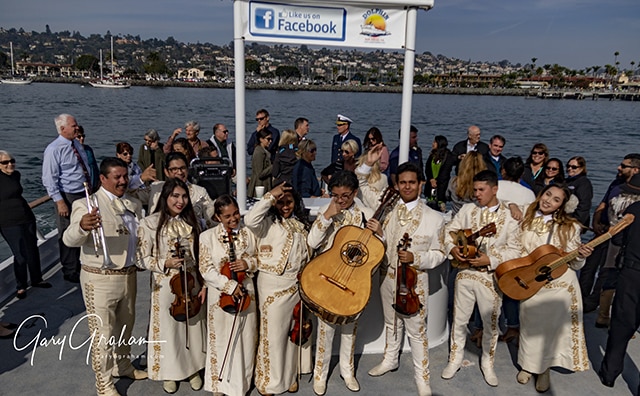 Plus an entourage of the mariachi band from the Montgomery High School’s Mariachi Juvenil Azeteca led by Guadalupe Gonzalez kept the spirits high with their music and a dance or two.

“Baja Ha-Ha is an annual event that showcases the partnership between San Diego and Mexico,” said Malcom.

“It’s also an event that highlights the beauty of the Port of San Diego and its long and storied sailing tradition.”

Ten years ago, SAC leadership recognized the significant contribution that the sailing regatta Baja Ha Ha made to the Pacific Coast sailing community at large. The event also introduced the sailing opportunities that could be found below the border off the Pacific Coast of Baja as well as up into the Sea of Cortez.

There are two scheduled stops during the journey. The first is at Turtle Bay (Bahia Tortuga); the second at Bahia Santa Maria at Magdalena Bay. The adventure is timed so that even the slowest boats will get about a day and a half of rest at each stop.

Although some boats invariably push hard to arrive earlier than others in their class, most 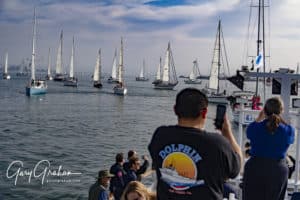 are looking for a safe and comfortable trip down the coast. Unlike most races, engines can be used at will. Crews may also deviate from the route and anchorages if they choose by simply notifying the race committee. This allows them the ability to lay-over at whatever anchorages they choose, leaving either a little late or a little early. The Ha-Ha organizers see their role as facilitating a pleasant experience for all the crews, not to create a lot of rules.

The objectives of the Ha-Ha are simple: all boats and crews reaching Cabo safely while enjoying great sailing and making countless new sailing friends. 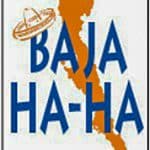 Although there are numerous social events, none are mandatory. And a word of caution: if a participant’s goal is to get drunk, party into the wee hours, and shake their booty all the way down the Baja peninsula, the Ha-Ha is not the right event.

Sure, most folks have a beer or two and might do some dancing at the beach parties, but Ha-Ha has never been about wild and crazy behavior. 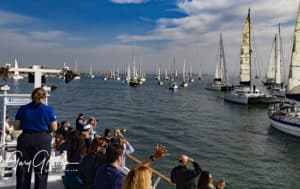 experience, so single handing is not allowed. While a lot of couples “doublehand,” the Ha-Ha covers a good distance in a relatively short period of time. Crews will probably enjoy the sailing and the R&R stops more with at least four competent crew members aboard the boat; but such decisions are the captain’s alone, not that of the Rally Committee.

The trip is broken into three legs in each Ha-Ha, so there have been 72 legs to date. Of those 72 legs, only two of them have been upwind. Indeed, the typical Ha-Ha conditions are light-to-moderate following winds with small-to-moderate seas.

However, the Pacific Ocean is not a controlled environment, so while conditions are generally benign, crews must be prepared for the possibility of heavy weather.

Commanders Weather, which does the forecasting for many of the best racing boats in the world, provides forecasts which will be included during the roll call each morning, but a forecast is a prediction, not a guarantee. 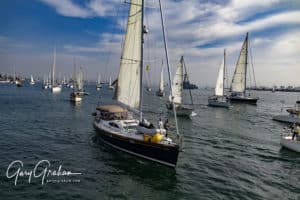 As for stops, Turtle Bay is a dusty, but charming fishing village far off the main road with a couple of small tiendas (stores), a few small restaurants, an internet cafe, and usually some diesel. It does not have ATMs, banks, McDonalds, boatyards or spas.
Primitive Bahia Santa Maria is truly out in the middle of nowhere at one of a series of barrier islands that protect the bay itself. Bahia Santa Maria has nothing except a restaurant that magically appears one day a year, along with a rock ‘n’ roll band, just for the Ha-Ha. Boats need to be self-sufficient from San Diego to Cabo. Many of the Ha-Ha sponsors offer services in either California or Mexico.

The entry fee is $395 per boat. (However, if participants are under 35, or the boat is under 35 feet, there is a discounted rate of $345.) These rates are only about 25% of the cost of similar two-week rallies elsewhere in the States and around the world.
Registration generally opens on their website in May each year. Entry packets are mailed containing rally information, special offers from the events sponsors, and an official Ha-Ha burgee. There is no in-person sign-up. 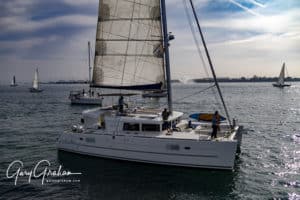 guarantee), to have a great time on the ocean with a great group of people! Secondly, participants can more than completely offset the entry fee by taking advantage of numerous Ha-Ha discounts on gear and berthing in California and Mexico. Many of the major marinas in Mexico have representatives at the Kick-Off Party.
Entrants also receive swag bags with hats, shirts, sunglasses, Frisbees, beach balls, mini-bio of the fleet, and more.

The captain and first mate receive entry, food and drink at the Costume Kick-Off Party in San Diego. Everyone gets free entry to the beach parties in Turtle Bay, Bahia Santa Maria and Cabo San Lucas, and the legendary Cruiser’s Baseball Game in Turtle Bay.
This is the 25th anniversary of the race, which draws recreational boaters from up and down the West Coast. The race is significant to the boating community and brings a heightened awareness to recreational boating. It’s also a plus to the tourism industry, bringing additional visitors to San Diego and Baja California.

The event is open to all boats over 27-feet that were designed, built and have been maintained for open ocean sailing. (Powerboats are also welcome.) 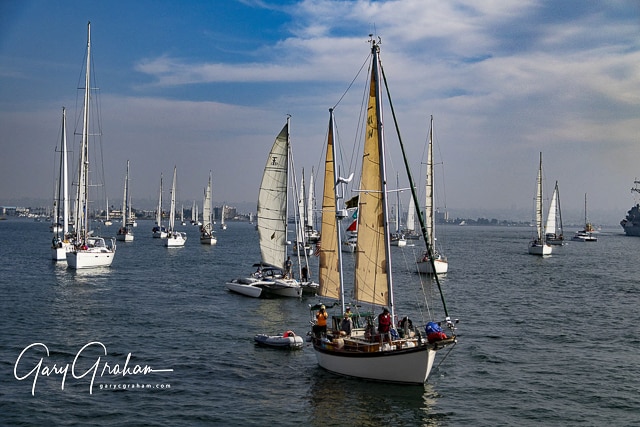 If sailors are not sure their boat fits those criteria, they need a trip survey from a marine surveyor. Smaller boats may enter with the approval of the Grand Poohbah.

SAC President Franke, recognizing the importance of developing ongoing relationships and dialogue between Mexico and the U.S., the Sportfishing Association of California (SAC) with Board approval, over the 10 years has expanded SAC’s efforts to encourage ongoing joint communication and cooperation between the local government officials and sportfishing leaders in selected cities in Baja and Mainland Mexico.

The Sportfishing Association of California (SAC) was founded in 1972 by industry leaders speaking out on behalf of their interests. SAC works with several agencies and stakeholders, including the California Department of Fish and Wildlife, United States Coast Guard, Navy, National Marine Fisheries Service, Federal Communications Commission, Congress, California Legislature, and the Mexican Government. SAC employees serve on multiple advisory panels in the state and federal arena and represent industry interests on a variety of topics.

Baja Ha Ha is organized and sponsored by Latitude 38 Magazine. Other sponsors are the Port of San Diego and the Consulate General of Mexico in San Diego.