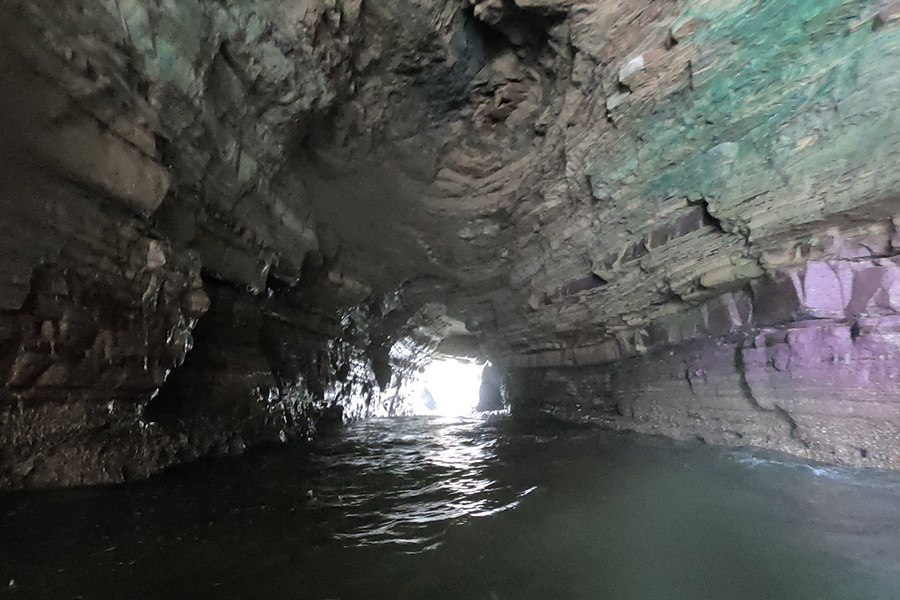 Some may have heard of the recent event that happened as a group of fishermen were riding back towards shore on autopilot when everyone fell asleep at the wheel.

What transpired next is a miracle.  The boat, steering itself, ran into the mouth of a seaside cavern going deep into the cliffside. 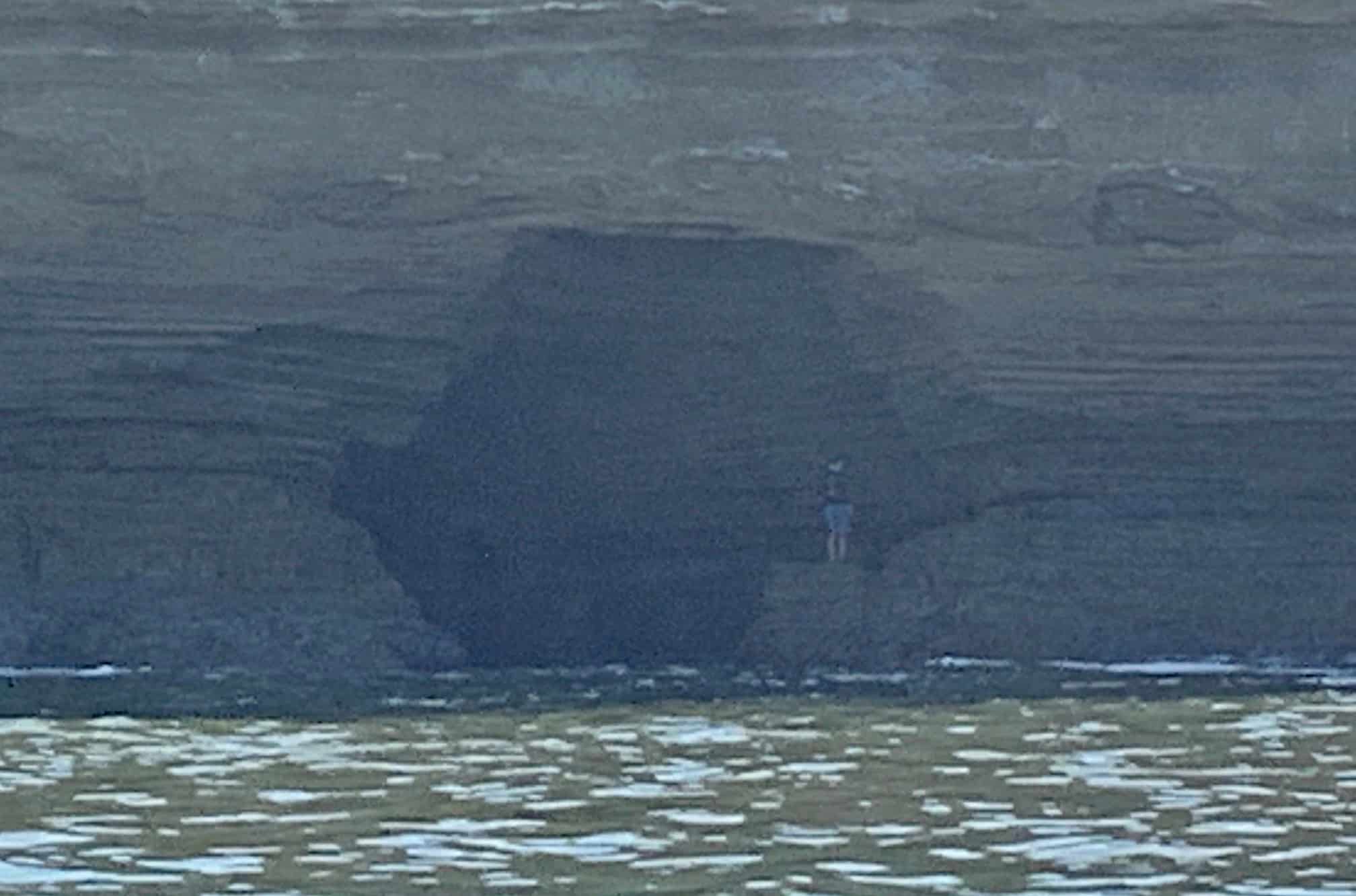 A few feet to either side and the boat would have smashed head-on into the rock.

San Diego lifeguards rescued the crew from inside the cave by swimming in, getting the crew members and swimming them back out to a rescue boat waiting outside of the cave.  TowBoatUS San Diego answered the call and shared more detail of this very unusual job. 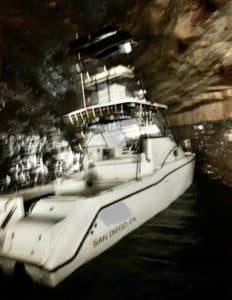 “This past week our crew was challenged with a task not too many people in our industry have even heard of. We had to remove a vessel out of a cave after it was smashed into hundreds of pieces buy large surf after becoming stuck inside the cave,” said TowBoatUS San Diego.  “The boaters were on their way in after a successful day of fishing and fell asleep while on autopilot. The odds of the vessel going into the mouth of the cave are 1 in a million. If the boat would have hit just a few feet north or south of the opening, we believe the outcome of the boaters would have been gravely different. San Diego’s lifeguards showed that they are the best lifeguards on the West Coast once again by getting into the dark cave, swimming the crew out to a rescue vessel and transporting the wet crew to land safely. Just hours after the incident, surf from a hurricane 1000 miles Southwest of San Diego started to build making it impossible for our crew to get in the cave. For several days the stricken vessel was bashed into pieces. The cave acted like a 200-foot long trash compactor destroying anything and everything on the vessel. 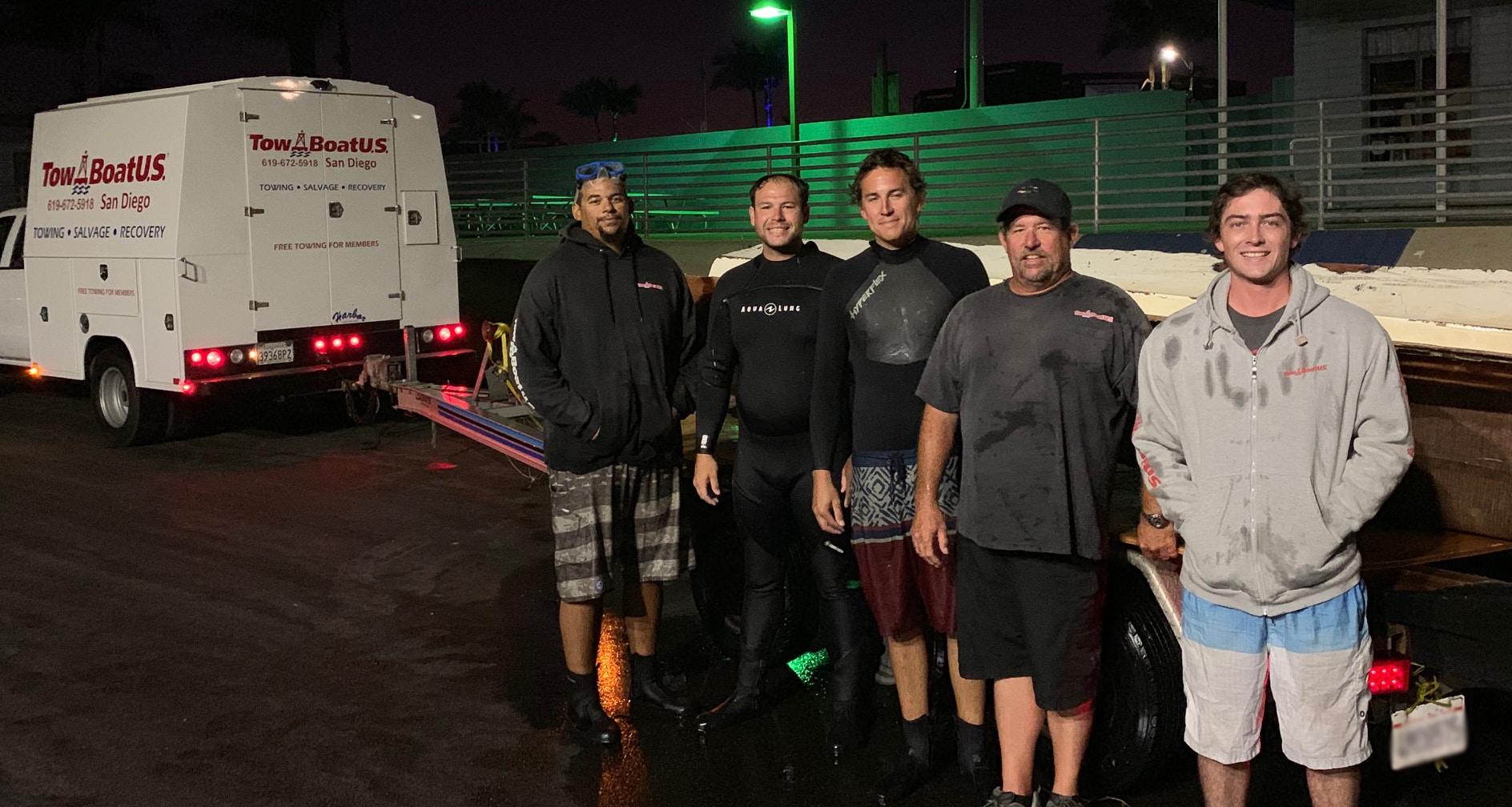 When the surf subsided our crew lead by Captain Tony Olson had to enter the cave and collect as much debris as possible during the low tide cycle. Captains Josh Nidzieko, Travis Basom and Casey Fodo fought the strong surge of waves crashing against the cliffs as they swam a 20′ aluminum canoe into the cave. Once inside the cave, they worked tirelessly removing anything they could hand lift and carry over uneven rocks. With the canoe loaded, it was walked and swam out of the cave while one of the divers retrieved a towline from TowBoatUS Shelter Island. 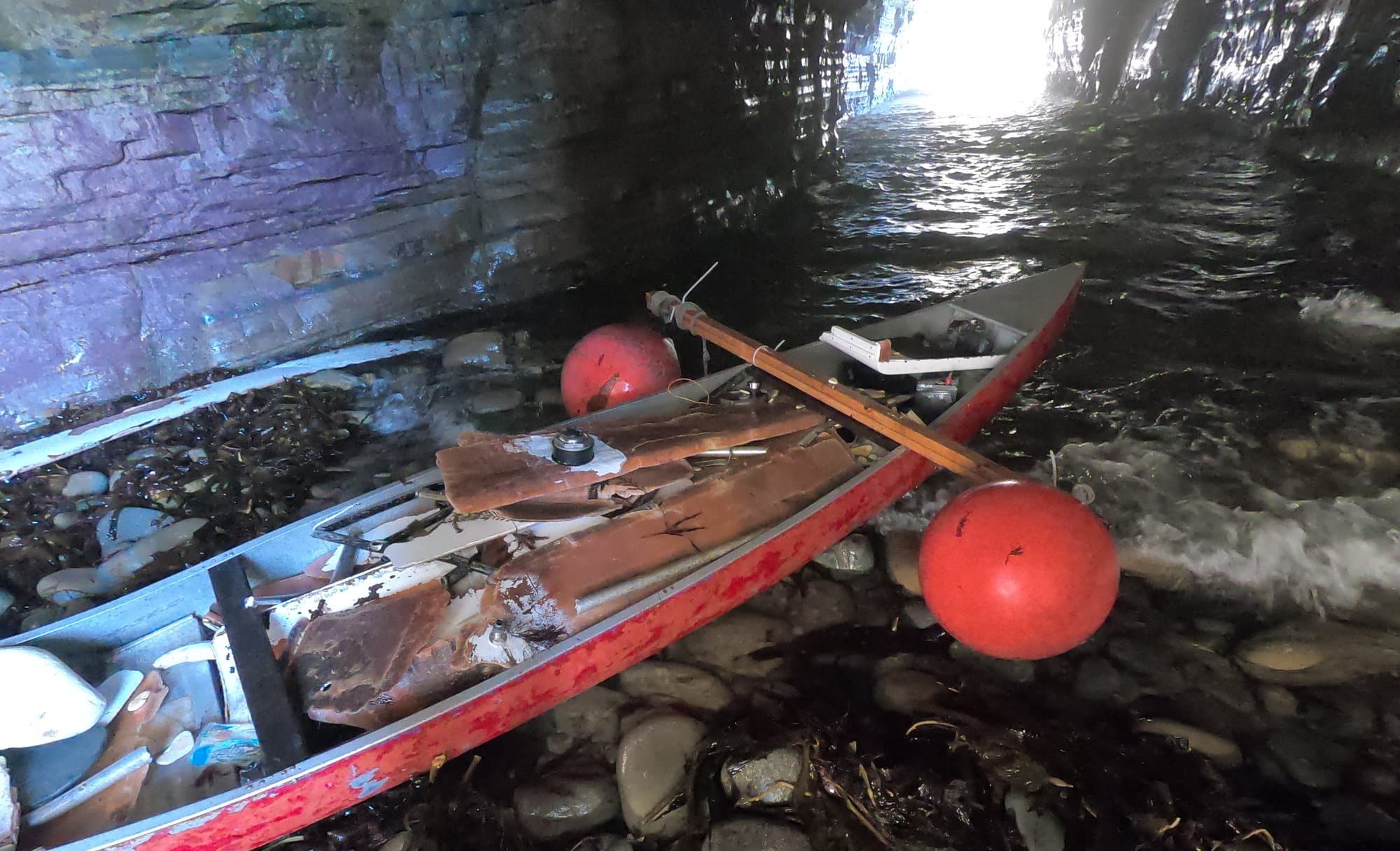 It took 3 days working a tide cycle to remove all the small debris out of the cave. Three large portions of the vessel including both diesel motors needed a bit more ingenuity. The cave made a 90-degree turn at the entrance making it impossible to simply pull the large parts out of the cave. We rigged an anchor and chain in a crevasse in the cave and attached a pulley in order to pull at 90-degrees. Our dive team rigged flotation and we successfully removed the larger pieces. 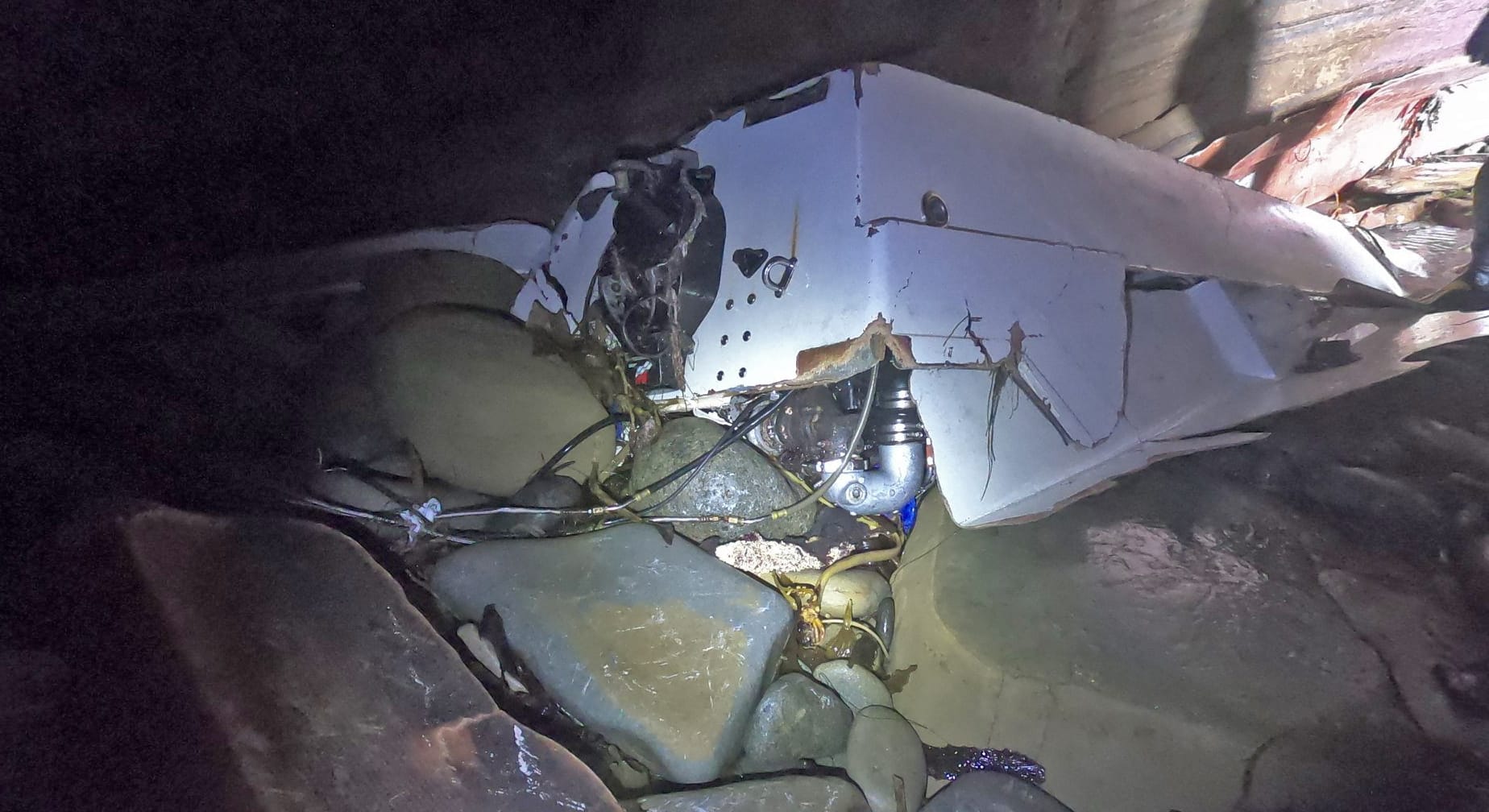 Our last large item to remove was a ball of debris tangled with an anchor chain, fishing gear, a sea anchor and one of the outdrives all twisted into a large part of the tuna tower. The 6-foot deep pool at the end of the cave corralled items and rolled in into a 4-foot round heavy ball. 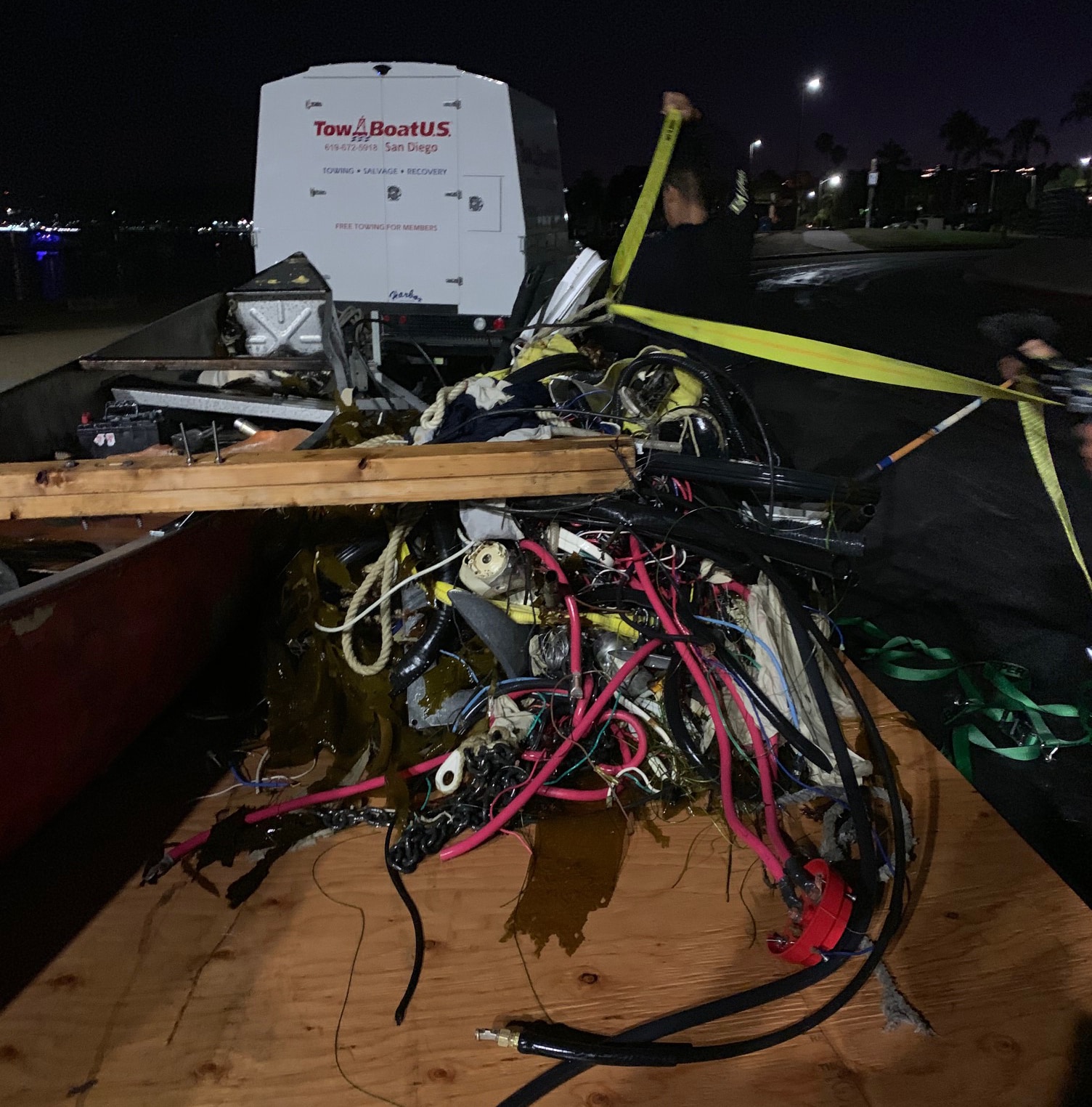 Our divers skillfully rigged straps and flotation to the debris and using our pulley system, removed the final piece. After each of the large pieces was removed, our crew had to tow them awash several miles to Shelter Island launch ramp and be winched onto a modified boat trailer. It took 6 days of hard work, but our team was able to clean all of the debris out of the cave. 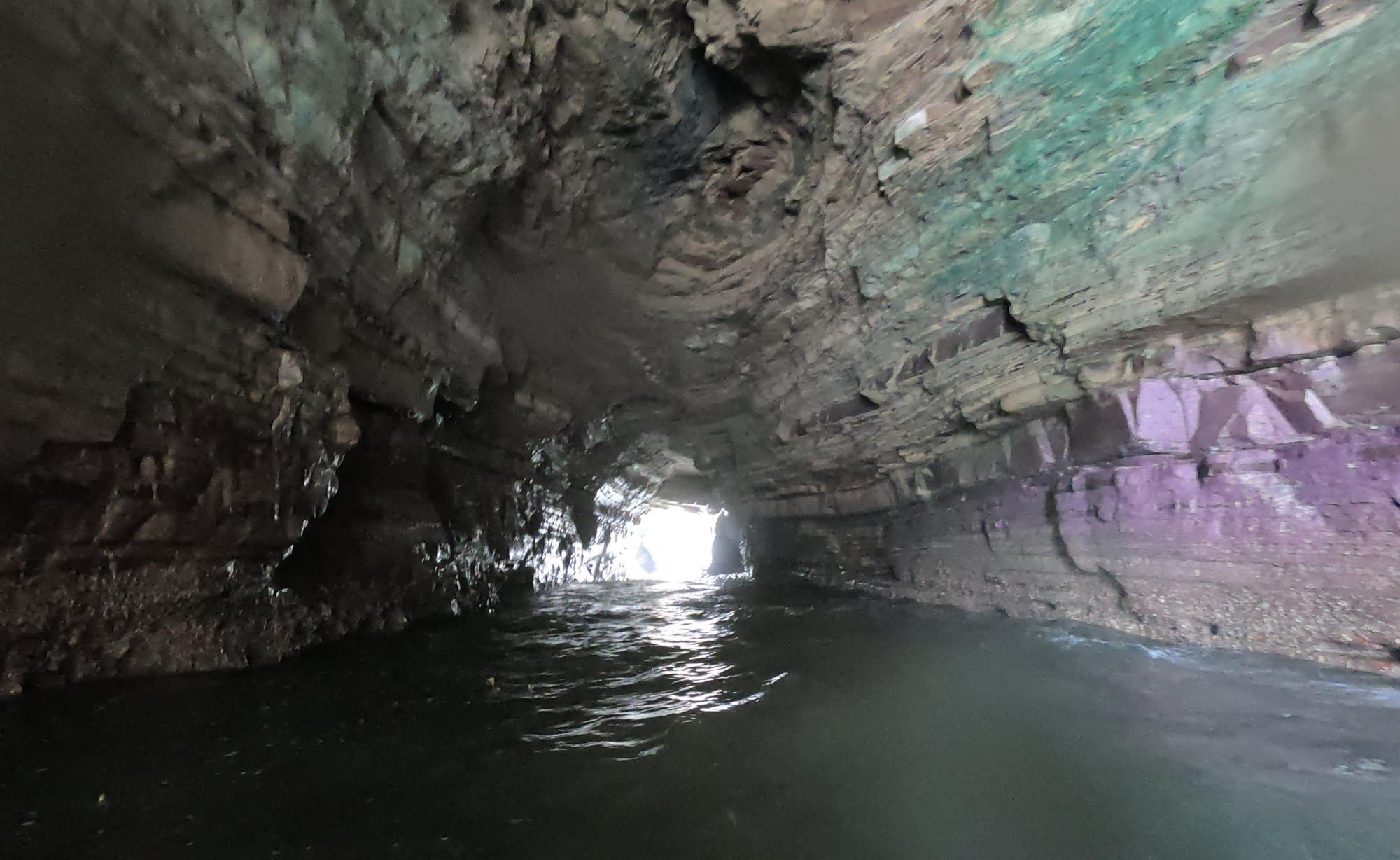 Although autopilots make boating easier, it is very important there is always someone on watch at the wheel. A good rule of thumb is to set a destination point 3 miles at sea and hand steer the rest of the way into the harbor. You can also install a watch alarm that will deter whoever is on watch from falling asleep.”

That’s good advice from the TowBoatUS team and they should know because they are always on hand to rescue those whose day has gone wrong.

Learn more about TowBoatUS and the BoatUS on BD.