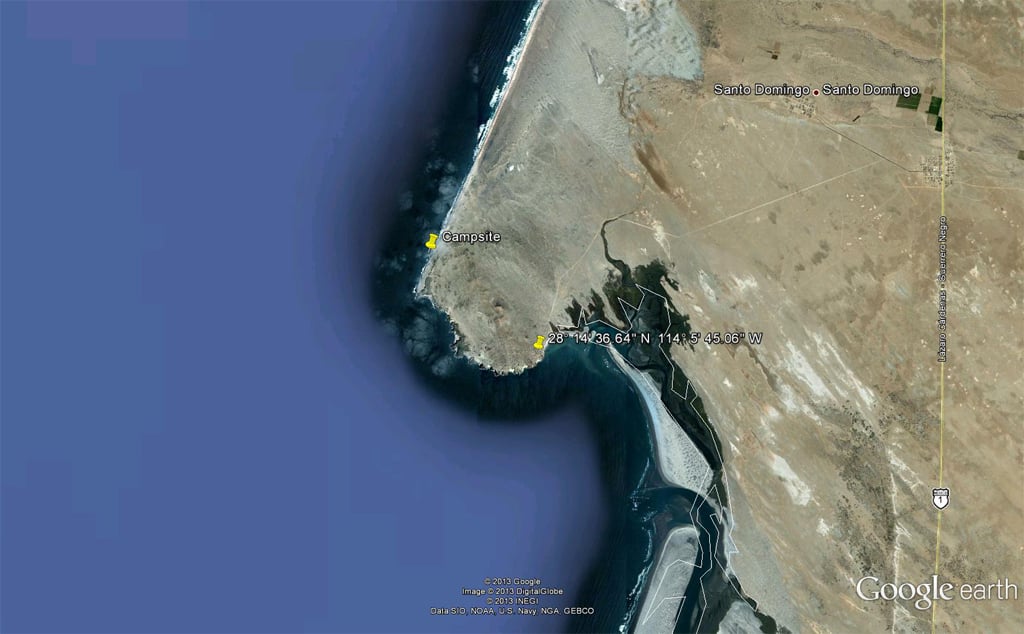 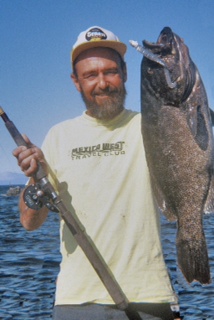 It didn’t take us long to set up camp – a couple of sleeping bags and a full cooler and we were good to go.

Next, we unloaded the tackle and began rigging. Both of us were light tackle types, using mostly 12-pound, and if we needed something a little stouter we would go to 20. Tom preferred spin tackle and I was using my usual bait casting outfit. We had planned to use artificials only, but in the late-’70s the selection was much more limited than today. Our choices were metal jigs, a few surface poppers (modified from freshwater bass lures by adding much heavier hooks) or the only other option: plastics.

Our friends Joe and Lori Graves had developed a lure they called “Scampi” which consisted of a weighted head and hook combination that a plastic tail could be slipped over. When Joe and Lori heard that we were making the trip, they put together a “care package” of their product in a variety of sizes.

In no time at all, Tom and I headed across the sand toward the surf with casting rods in hand. Splitting up, we headed in opposite directions in search of holes, cuts or eddies that might be holding fish. On Tom’s first hookup, I could hear him hollering over the roar of the surf.

For the rest of the afternoon, we were two grown men with bent rods behaving like children in a playground, whooping, hollering and chasing hooked fish into the surf as the line on our spools came dangerously close to the knots. Soaked to the skin and waving our catches in the air for the other to see, we were like hockey players holding the Stanley Cup above our heads after winning the playoffs. Instead of crowds though, the only witnesses to this tableau were the startled seabirds that took to the air as each primal scream of “hookup” pierced the relentless roar of the surf! 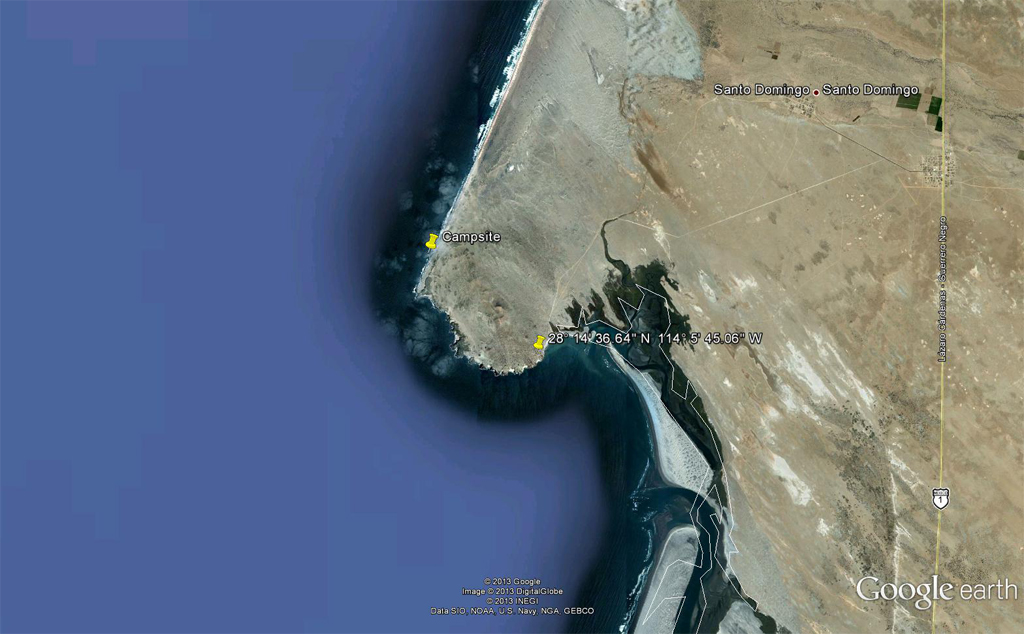 Back at camp, giddy with our success, we huddled near the campfire which provided our only light and basked in its warmth as it diminished the Pacific’s chill. We sat quietly enjoying our respective cocktails and listened to the crackle of our fish cooking on the fire. For the moment, Tom had forgotten his “Baja Stories” or maybe he realized he had just lived a great one that would be told and retold many times.

We rolled out of our sleeping bags the following morning, eager to get back to the beach and resume where we had left off the night before. The campfire was cold and as we looked around for wood to rekindle the fire, we realized that we had a visitor. At the perimeter of the camp crouched a grizzled old Mexican man with his back to us staring out to sea. 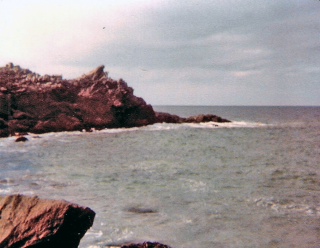 While I coaxed some flames from the damp wood, Tom walked over to the old man, calling out his standard greeting, “Hey, buddy.”

The visitor slowly stood up and turned toward Tom with a big smile and twinkle in his eye. “Hola Tomas, como estas?”

The visitor turned out to be a friend that Tom had met on one of his earlier trips. Tom invited him back to the campfire and offered him a cup of coffee.

“How is the fishing?” the old man asked. Animated as usual, Tom told him about the great afternoon we had experienced the day before. The old man remained silent for a few minutes and then pointed toward the rocks south of the beach where we were camped.

“Walk until you get to the second cove. There are many fish there.” 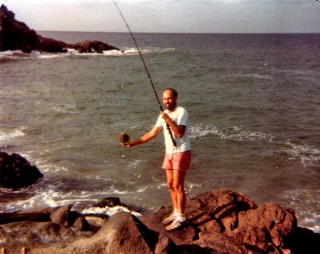 Violating my rule of not leaving fish to find fish, I allowed Tom to persuade me to take a walk down the beach and check out the cove. After thanking the old man for sharing his local knowledge, we invited him back for dinner that evening and we gathered our rods and trudged down the sandy beach toward the cove.

After a short walk past some rocks and over some big boulders, we arrived at the first cove. We scurried up and over more boulders and down to the second. It was surrounded on three sides by steep rocks. The entire cove was about 75-feet across and appeared to be pretty deep – maybe 30-feet in the middle. We both headed for a suitable perch to use as a casting platform. Tom reached his spot and made his initial cast. After the non-stop action the day before, he seemed disappointed that he didn’t immediately have a bite. 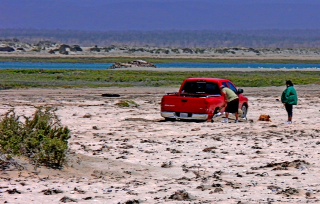 Now, I was in position and started to make my cast. I stopped mid-cast when I spotted the telltale dark shadow of a huge baitball of sardines near the outer edge of the cove. Redirecting my cast beyond the shadow, and keeping the rod tip high, I let the scampi flutter down. Wham! My rod bent almost double as the line vanished from the spool! Tom reacted instantly and flung his scampi toward the baitball. Before I could land my fish, Tom had hooked his own. Mine turned out to be a 15-pound grouper but Tom had hooked his first white seabass from the shore.

For the remainder of the morning, as the incoming tide continued, both of us gave the scampis a workout. It was a do no wrong morning as we laughed out loud at each new strike. That cove had more species than most aquariums I have visited. As the morning progressed, it became a contest to see how many different kinds of fish we could catch. White sea bass, yellowtail, flag cabrilla, spotted cabrilla, leopard grouper, shortfin corvina, orange mouth corvina, spotfin croaker, surf perch, trigger fish, spotted bay bass, pargo, halibut, bonito, blue shark and even a small stingray – an incredible 16 different species between the two of us by the time the tide became high slack. 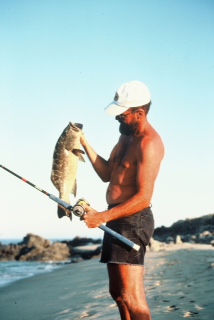 We marveled over the morning’s action as we rested on the rocks. Although both of us had caught a few exotics from the beach, we agreed that white sea bass and yellowtail from the shore was a personal first for each of us.

Under a black velvet sky sprinkled with more stars than you could count that evening, Tom’s Mexican friend returned. We treated him to a white sea bass dinner and toasted him for sharing his “hot spot” with us. As the evening wore on, Tom and I shared the day’s events and basked in the delight of this perfect Baja fishing trip that had bonded two friends closer together. The sheer volume and number of species caught between us that day guaranteed that this day would be etched in our memories for the rest of our lives. 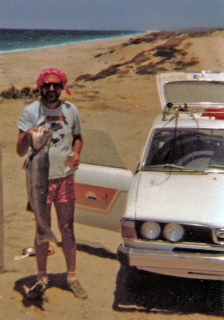 It has been almost four decades since Tom and I made that trip. In preparation for this article, I revisited the area recently. Baja’s popularity has exploded over the years and I didn’t know what to expect as I drove out the washboard road to check out the beach. Would it be lined with ostentatious Gringo houses blocking the way to the beach? 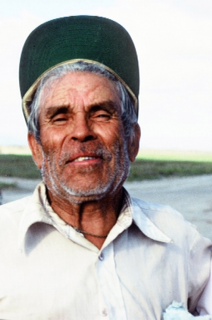 I was relieved as we pulled up to the sand beach in our van. No houses blocked the way or view; in fact, the beach didn’t look much different than it had 40 years ago. There was a Mexican family with their pickup buried to the axles in the soft powder sand. The grizzled old Mexican man had been replaced by a grizzled old American man who said he had lived there for the past handful of years, but when asked, was reluctant to give me his name. He did report that he had caught a few white sea bass in the 30-pound class earlier this spring.

Was it my imagination or could I still hear Tom whooping and hollering, with an occasional “hookup” piercing the air? No, it was probably just the sound of the roaring surf.

With all the changes that the Baja Peninsula has endured, it’s nice to know that you can still return and occasionally find the “old Baja” that caused the Baja explosion in the first place and revisit memories of a time long past.