Ever since I remember, I’ve fished and have been lucky enough to spend my entire life near bodies of water that held fish. My mom always called me a “Dreamer”. She was famous for getting her shoe off her foot and on to the side of a head in less than a second. At nearly 95, I think she has lost maybe a tenth of a second over the years. She still beats most Jeopardy contestants to the buzzer while watching the popular show. She also gave me the best piece of advice I ever heard. It’s really very simple,

“If God wants you have something you will have it, but mom is not going to get it for you”.

I have used it many of times on my own children and have grandchildren in my sights to hear it from “Papi Pesca”, grandpa fish.

When I was a kid I would watch every fishing show on TV. My dream was to one day have my own fishing show. When my little brother Kevin and I would race barefooted through the mangroves chasing mullet, snook, and baby tarpon, I would narrate our adventures in real time. Well I guess God didn’t want me to have my own fishing show, but he filled my life with little miracles connected to my love of a pole, a piece of string, and an array of finny creatures connected to it. I have made a good living for the last thirty-some years from sport fishing and I stumbled into every opportunity it ever presented to me.

My fishing buddy Wade Stephenson and I used to catch a lot of tarpon in Boca Grande Pass, Florida with a jig we made ourselves. We decided to see if we could sell them and made 3,000 of them in or garages and begged area tackle shops to take them on consignment and they sold out in two weeks. Eventually we made various sizes and they could be found in Walmart, Target, K-Mart and many tackle shops. If Shark Tank would have been on the air back them I’m sure we would have become Godzillionairs. Through that company, I began working with David Stanley, a tackle wholesaler who purchased our products and was a frequent visitor to Costa Rica. 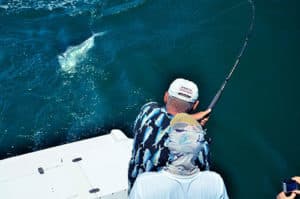 My first trip to Costa Rica was over 30 years ago with David to Archie Field’s Rio Colorado Lodge, where we pulled on tarpon all day and caught snook in the back country. Several trips later I mentioned to Archie, “If you ever need someone down here, I would love to be considered”. He laughed, and told me I was about number 900 in line, but he would think about it. Almost a year later my phone rang and Archie asked if I wanted to come down and run his lodge. He was my mentor and taught me this business. One of his tricks was to never put big fish in his brochures, because he wanted everyone who came, to catch a fish bigger than they saw in the promotional material.

Five years later I left Rio Colorado after cancer took Archie. I did a stint at a fishing travel desk in a hotel in San Jose and ran Golfito Sailfish Ranch a short time, but those adventures are whole stories in themselves. Twenty years ago, my phone rang again. The voice on the other end said, “My name is Robin Williams, I was told you know a little about the sport fishing business and would like to fly you to California and discuss a project in Costa Rica.” I had never been to California so off I went. We made a deal that I would consult on the planning stages of Crocodile Bay Lodge. As the project came to life Robin asked me if I wanted to stay on as Fishing Director. Preferring salt air to bus fumes and perfume I left the big city and got back to my roots.

For 18 seasons, I have walked that long walk on the pier of Crocodile Bay and sent thousands of guests out to fulfill their bucket list dreams.

The gifts I’ve received from running fishing operations over 2½ decades in Costa Rica are tremendous. Although the big guy in the sky did not see a fishing show in my plan, he let me appear in more than 50 of them. A fishing pole has put me on the same playing field as many people that if not for fishing I would have never met. Presidents, Ambassadors, Oscar winning actors, Sitcom actors, rock stars, country stars, Hall of Fame athletes, World Series and Super Bowl champions as well as many many special people who came as clients and left as friends.

Crocodile Bay has always been involved in marine conservation. Robin’s son Cory served as President of the Central American Billfish Association and they have always given me time to participate in the Golfo Dulce Commission and to work with FECOP, the sport fishing advocacy and conservation group here in Costa Rica. We have made a difference.

Time passes in the blink of an eye. Robin and I are turning into grumpy old men and Cory and Beau Williams are at the helm of the ship. They have teamed up with another father-son group with Bryan, Bryce, and BJ Johnson. They have big plans for Crocodile Bay in the future. Crocodile Bay, like saltwater runs through my veins. Robin and I birthed it, raised it, and I refer to the captains and mates as my children and truly feel that way. Not forgetting, your children can sometimes drive you crazy but regrets, I have none.

But it is time to step aside but not away. I am turning over the helm of day to day operations to younger blood and have become the “Ambassador” to Crocodile Bay. I think a better fit for a title for me might be Salty Old Fart. I will be promoting fishing at the Safari Club shows in Dallas and Las Vegas in January and no one knows the fishing program at Croc Bay better than me. I will also be informing on FECOP activities. I will be doing a monthly blog I think they call it, here to stay in touch with Croc Bay followers, and will include a report on advances in conservation and fishing issues. 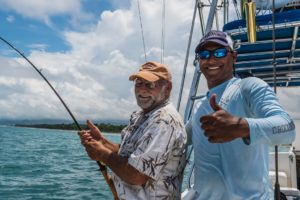 After the ocean being so good to me over the years I feel it is time for me to give back and will be working much more at FECOP promoting sport fishing and conservation. Puerto Jimenez is my home and I’ll be dropping by from time to time to say hello to old friends that come to fish at Crocodile. I might even have time to accept fishing invites, as before at I times I was too busy to fish with as many client/friends as I wanted to.

So now you know why the title of this piece is, “It’s see ya later, It’s not goodbye”. And thank you all for the great memories!

A Little Information About FECOP

Please check us out at www.fecop.org. The Williams have donated an all inclusive fishing trip for two at Crocodile Bay Resort that you can register to win on our website.