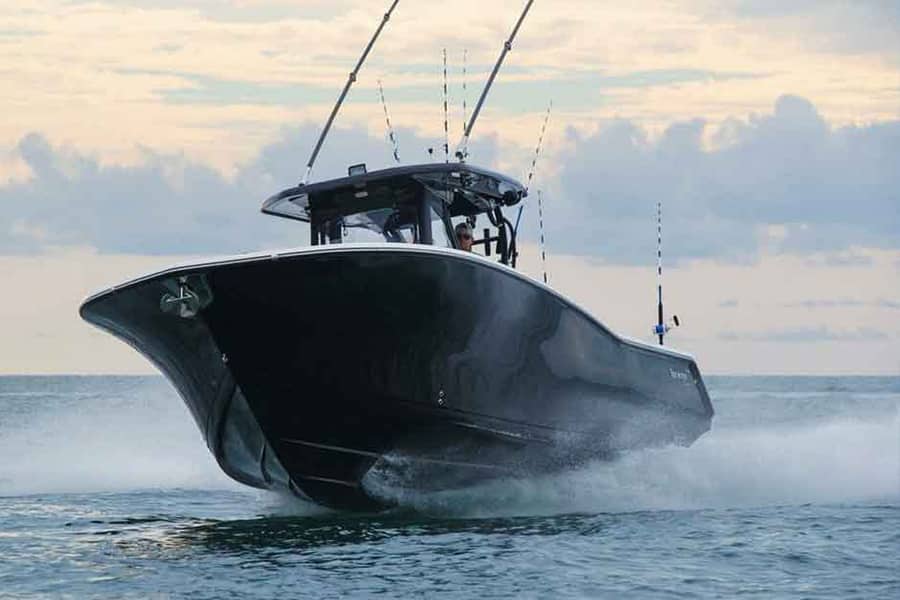 It’s time to get serious.

The problem with most of the 30-something center console fishing boats out there is that they don’t seem nearly as big as they really ought to. You’ll find 32-footers with less deck space than many 20-something CCs, due to bloated console cabins and a ridiculous amount of seating. You’ll see 34-footers with livewells that have the capacity of a minnow bucket. And you’ll see 30-footers that have four – count ‘em, four – flush-mount rodholders in the gunwales. What gives? Many of these boats are trying to be all things to all people, which rarely works out well. Fortunately, that’s not an issue with the Tidewater 320 CC Adventure.

A glance at the bow lets you know that this is a Carolina boat, born and bred. The entry’s tall, sharp, and capped off with gobs of flair. It works. When we ran this boat the breeze was kicking, yet it remained dry at the helm. The other thing that the broad bow will do for you is provide a ton of buoyancy when you’re charging forth into big rollers, and stuffing the bow should be practically impossible in anything short of hurricane conditions.

Another thing you can tell at a glance: this boat’s built by fishermen, for fishermen. The transom can sport up to a half-dozen flush-mount rodholders, the number of gunwale holders is optional, and the back of the leaning post has two braces of rocket launchers, a lower with five and an upper with six.

There’s a whole lot more to love about this leaning post setup, too. The integrated tackle/rigging station includes two bulk stowage drawers, two slide-out tackle boxes, a sink, and a 30-gallon livewell (there’s a second livewell in the transom). It’s flanked by a pair of 41-gallon insulated fishboxes in the deck, though we wish the macerator pumps were diaphragms (which are better at sucking down scales and fishbones) instead. And before you get too far from the helm take note of the electronics flat. On many boats of this nature, it’ll be large enough to install a pair of 12-inch MFDs but this one can handle 15-inchers.

Fishability perks continue as you move forward in the boat. This console is longer and narrower than many, providing plenty of pass-through room to move fore and aft while you’re strapped in with a bent-butt. This still leaves room below for a head compartment and a narrow berth for stowage and/or quick catnaps between bites on overnighters. It also provides just enough width for a double-wide and very long lounger forward of the console, which sports a cooler under the front. Thanks to the copious room on either side and the placement of bow seats very far forward, you can work lines next to the gunwale until you’re a good three-quarters of the way forward. Step up in-between those bow seats and you’ll be able to clear the bow with your rod tip. And if you press a button, a chunk of the deck rises up electrically to become a hi/low table. We’re guessing many die-hard fishermen would just as soon do without this, but hey, you can’t argue it isn’t cool to press a button instead of fumbling with a removable pedestal if you really feel you need a cocktail table in your boat in the first place.

If you’ve been checking out center consoles in the low-30-foot range and you keep wondering why they all feel like they have the deck space of a 28-footer, step aboard the Tidewater. There’s a good chance you’ll quickly realize that this boat is ready for some serious bluewater adventures.