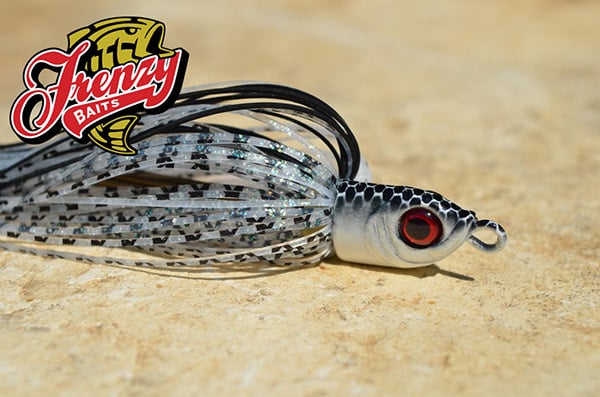 Fall is officially in the air. The weather is growing colder and the leaves are starting to change colors as they cover the soon to be frozen ground. Christmas is right around the corner, and the temperatures are dropping. Bass are starting to get a serious appetite, preparing for the cold months ahead. That’s why fall is one of my favorite times to fish, it is such an awesome time to take advantage of the A-rig, and all the opportunities fall fishing has to offer. One of the best baits that I have ever used during this season is the Frenzy Baits 5 prong Bounty Hunter.

My favorite pattern is the Shad. Unlike traditional A-rigs, this one has a skirt on the head of the bait, which makes it look even more natural. I know the Bass must prefer it as well, since I catch far more fish with a skirted rig, than with one that doesn’t have a skirt. The Bounty Hunter looks just like a school of bait fish swimming though the water and the bass can’t stand it, especially this time of year. No matter where in the country I’m fishing, the Bounty Hunter is always rigged up on one of my Signature Series Team Rainshadow Revelation rods.

The Bounty Hunter is such a versatile bait it can be used many different ways. I like to rig up the V&M Thunder Shad Jr. soft-bodied swimbaits on the ends of the Bounty Hunter. They are the smaller versions of the regular sized Thunder Shad. The Jr.’s are still in the prototype stages right now at the time of this article, but should be available to the public shortly. Personally, I don’t believe there is any better combo out there. Combine the Bounty Hunter A-rig with the V&M Thunder Shad Jr. and you’re sure to get the bites. The Thunder Shad is an awesome swimbait, it has great action and is very durable. I put the swimbaits on a 1/4 oz. lead swimbait hook and super glue the head to the hook so it doesn’t fall off. It’s a great way to catch an extra few fish without having to re-rig the baits.

During the fall, the baitfish are schooled up and the bass aren’t far behind. The key to fall fishing is finding the baitfish. If you can do that then you’re golden. More often than not, the baitfish are in shallow water and sometimes you will even find big balls of bait in deep water, but generally speaking in the fall they stay shallow. I like to start my search in the mouths of major creeks off of the main lake. I will then work my way to the very back of the creek throwing the Bounty Hunter, Thunder Shad Jr. combo. There are times I will search 3 or 4 creeks with no fish or bait fish and than the 5th one I check will be loaded. Although, it can and will change on a day-to-day basis, because the baitfish and bass are always on the move and never seem to be in the same place twice! So, it’s very important to keep your trolling motor on high and keep searching until you find them. My favorite technique is to target stretches of bank where the main creek channel swings in very close to shore.

It has deep water close by and generally that is where I find the bass. If the fish aren’t there at the given time you’re fishing a particular stretch of bank, it doesn’t mean they aren’t ever going to be there in the future or have never been there before. You could leave for an hour, come back, and find the mother load! It all depends on what the fish are doing at the moment. One of the keys to being a great angler is to have the flexibility to try new things, and think outside of the box. You could catch a fish that’s feeding on bait fish and before you can even get the fish unhooked, the school of bass and their prey could be gone. Fish are so active, they’re constantly moving around. That means you have to move too.

Fishing the Bounty Hunter all day long isn’t necessarily the easiest way to search for bass. However, having the right rod, reel and line set up makes it a lot easier. My rod of choice is the Nik Autrey Signature series 7’10” H action Team Rainshadow Revelation rod. It has enough backbone to heave the Bounty Hunter and is long enough that I can easily sling the rig a great distance. This rod is the one I choose when I’m throwing big swimbaits like the 8″ BBZ-1. It is such a great rod for handling big heavy baits. The reel I use is also very important. You can’t beat a 7.1:1 high speed Lews Tournament Pro baitcast reel. It is strong enough to handle the heavy line and has a big enough spool that I don’t have to worry about spooling the reel out when I make a long cast.

My line of chose is 20 lbs. Sunline Super FC Sniper fluorocarbon. I really like the fluorocarbon with this technique because is has no stretch. I know a lot of buddies that use braided line with the rig, and while that could work great for them, I personally prefer fluorocarbon since it doesn’t float. I want the option of letting the rig get down in the water column if needed. Fluorocarbon enables me to get the rig down deeper faster than I can with braid. Braided line is best used in shallow water. So often I find myself fishing the Bounty Hunter 10-15 feet down in 40-50 feet of water and fluorocarbon gives me the best control over the rig.

The A-Rig was a new technique to me a few years ago, but since then I’ve gained experience with it as well as all the rigging options. The rigging I stated above, has worked the best for me. I hope these few tips I’ve shared with you will help you have more success with the Bounty Hunter. It’s an exciting way to fish and I hope you have as much fun fishing with the Bounty Hunter as I have! Be sure to check State laws before taking the Bounty Hunter out to slay the bass. Some states only allow you to use three hooks with this rig, while others will allow you to use all five. Each state is different so make sure that you know the regulations before you get out on the water.

“Do whatever it takes”

Nik Autrey
"I grew up fishing with my grandpa in Port Angeles, Washington and by the age of 8 I knew making a career in this industry was what I wanted to do wit...