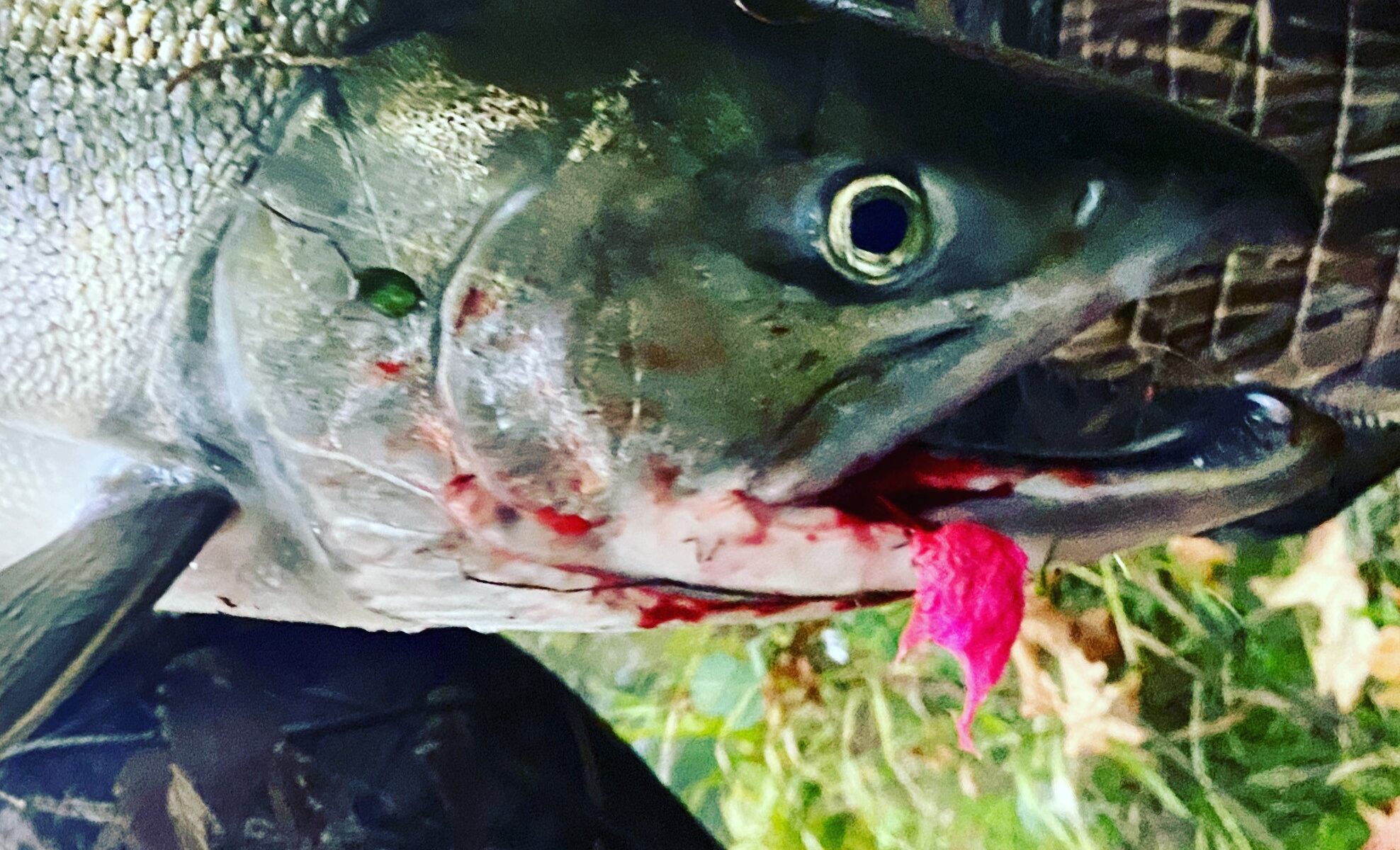 There are different stages of fishing an angler goes through.  When you first start out, you just want to catch a fish…any fish.  As you start figuring things out, you progress from wanting to catch anything to perhaps targeting a specific fish.  Once you develop a level of proficiency catching a specific fish, you start thinking about how you want to catch it, or catching one that has attained a minimum weight or length, or a fish at a certain stage in their development.

For example in my SoCal Top 10, I want to catch a barracuda every year.  But any barracuda doesn’t count.  If you are fishing for white seabass or yellowtail, and a barracuda bites your bait, that’s just bycatch.  But if you go out when they’re in the upper part of the water column chasing bait, and you get one (or several) on the jig, that’s a catch that counts. 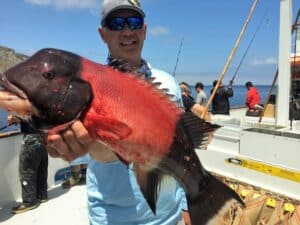 Similarly, I always want to catch a sheephead.  For me at least though, I don’t get much satisfaction catching a pinky.  I want to catch a bull that is in its full red and black terminal stage of development (right).

Setting this higher standard isn’t something unique to me.  Lots of anglers do it.

In Hawaii, catching an ulua or giant trevally from the shore is an ancient pursuit that has almost a cult-like following amongst the local fishing populace.  I wrote a blog post on SoCal Salty five years ago documenting the pursuit of a Hawaiian angler, Tali Kuliha’apai, to catch his ulua.

Over there, they call juvenile ulua a “papio.”  At 10-pounds, a papio graduates to “pa’uu” status.  Less well defined is when pa’uu attains ulua status.

It’s just kind of…when you see it, you know. 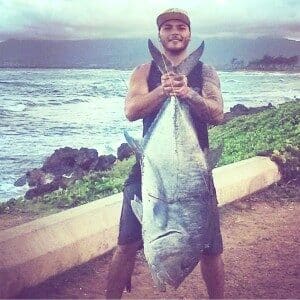 After years of chasing, along the way educating himself on their habitat, feeding habits, and conditions on the water most conducive to catching this elusive fish, Tali ultimately achieved his goal of catching an ulua.  The culmination of his years-long pursuit was this beautiful 64.1-pound trophy.  Five years later for Tali, it still stands as “one of the most significant fish I’ve ever caught.”

A few articles back, I mentioned how my last chase in the Pacific Northwest for this year is the chum salmon.  What I may not have made explicitly clear in that post though was the exact kind of chum salmon I’m looking for.

I’m fascinated by the life cycle of salmon.

They start out as hatchlings in freshwater.  Then they migrate out to sea.  Chum and king salmon have a 3-year life cycle.  They spend 3 years in the ocean, then return to their original place of birth (a remarkable feat unto itself) to spawn, and then die.  Their return to freshwater creates a seasonal feeding bounty for the local animals.  It also re-introduces vital ocean nutrients to that inland habitat.  How their return to freshwater plays within the larger circle-of-life perspective for the flora and fauna in the spawning grounds is something that makes me believe in the existence of a higher power.

Since getting back up here, I’ve gone twice now on a local river to target chum.  Specifically, though, I want one that’s been in freshwater long enough to have undergone the full transformation to their terminal phase of development.

That elongated hooked nose, the wild pink and purple splashes against that dark green backdrop…that’s what I’m looking for.

This last week, I saw my first chum salmon up close.

Wednesday (October 25th), I was out with my Dash Point Pier buddy, Ken Kim.  Another angler, Yong, joined us midway in our morning session.  We were in a spot that Ken has dubbed Upper Bumhole.  Bumhole proper was just downstream from us.  Ken named it Bumhole because there is a homeless guy who’s made a permanent shelter right next to the river there.  It was good that I had some time prior to Yong arriving where I got to practice fishing the “flossing” technique that Ken likes to employ here. 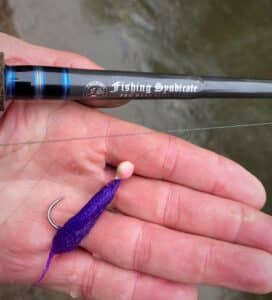 The flossing setup is interesting.  Ken uses 15# mono mainline on a baitcasting setup.  At the end of the mainline, Ken attaches a one half to one-ounce ball style sinker to a clip swivel.  The weighted clip swivel slides along the mainline, and a bead protects the knot where the mainline attaches to a barrel swivel.  At the other end of the barrel swivel, Ken ties an 8-foot 15# mono leader that terminates to a floatie bead, a small section of brightly colored yarn, and a 1/0 barbless Octopus-style hook (right).  You can vary how high this lure presents itself in the river by changing the size and/or quantity of floatie beads used.

The first challenge for me was just figuring out how to cast this setup.  Since we are at the edge of a heavily wooded river, there isn’t much backcast area behind you.  Combined with the long 8-foot leader, it’s no small feat to cast it.  Ken taught me a casting technique that feels like an abbreviated fly-casting motion.  You lift it straight up to get the line out of the water and moving.  When the weight is directly above your head, you start your forward casting motion.  Depending on how far you are trying to cast, you vary your release point.  You cast about 11 o’clock from where you are standing.  You vary how far you cast to try and test different lanes of drift in the river for fish.

Once I got to a level of semi-consistency with the casting motion, I could start getting familiar with the topography of this particular stretch of river.  As the weight bounces along the bottom, you become familiar with what a typical drift downriver feels like.  Any out of the ordinary pauses or pulls along the way, you set on it, and hopefully, it sticks and pulls back.  So far, I’ve had one set where I felt a fish wiggle on the other end.  It didn’t stick though.  Maybe I hooked it near the gill plate and the point of the hook didn’t penetrate? 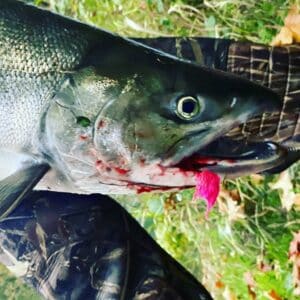 Back to Upper Bumhole…  Yong shows up and sets up a little ways upstream from us  (so Upper Upper Bumhole?).  Ken taught me that there is a protocol for casting on the river.  The downstream guy goes first and you better be ready to go after they cast because the next guy upstream is waiting on you.  It felt good to just get into the proper rhythm with these 2 regular river anglers.  Shortly after Yong arrived, he managed to hook up.  I caught the whole encounter on video, but long story short, the fish caught was still pretty salty chrome.  Its skin color was only beginning to change to dark green and the hook in its mouth was still developing.

Good catch…but not the right fish.

I’ll be back at it this week.  Ken is taking me to a different spot on Monday.  We’ll see what that spot has to offer.  In the meantime, enjoy the video and good luck if you get out there.