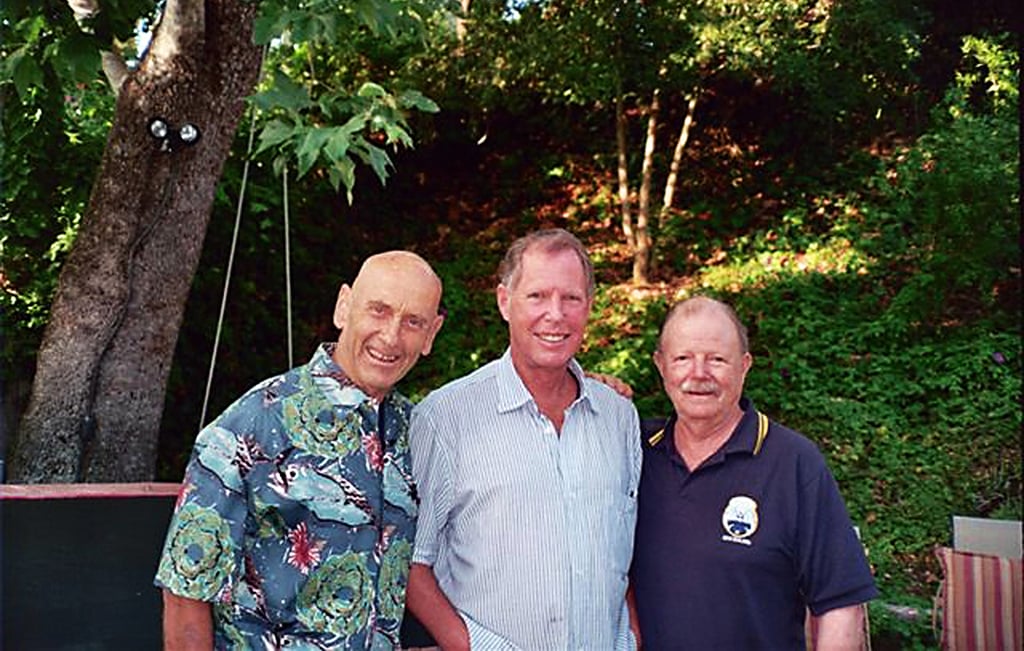 The water off Newport Harbor was a magical place for three young boys to grow up, sharing their teen adventures in the warm California sun.

Ralph Clock, David Denholm and Jerry Garrett fashioned a friendship that resulted in an adult brotherhood. Yet, their individual paths of pursuing sport fishing differed and the three accumulated extraordinary fishing exploits and the stories to go with them. And their stories have continued.

In 1985, Dave Denholm became one of the early supporters of tag and release when he performed that exercise on the first marlin of that season. At the time, Southern California fishing clubs only recognized a killed fish for First Fish of the Year honors, but Denholm believed that he and a few others could influence anglers to consider tagging and releasing as an acceptable alternative. His boat, The Espadon, a Pacifica 44-footer, was one of the first high-profile boats to take a stand and release all marlin, an example Denholm has continued.

Dave’s unwavering support of T&R may be his greatest contribution to local fishing.

He encouraged the fleet to follow his example and they, too, began releasing fish, allowing countless numbers of marlin to survive. When Denholm went so far as to tag and release the first marlin of the season, reflecting the mind-set of the day, the Los Angeles Times, noted in their fish report: “David Denholm, on his boat Espadon, reputedly released the first marlin of the season.”

That catch was the first time the first marlin had been released rather than weighed in. There was no recognition for release at the time, yet Denholm continued seeking, finding and tagging and releasing marlin in the years to follow, scoring many “firsts.”

Over time, local clubs began to recognize releases along with weighed-in fish regardless of first or last. That circa 1985 release was the beginning of it being acceptable to release the season’s first striped marlin. It took a while to gain traction throughout the sportfishing fleet. Nearly 30 years later, stemming from his adamant stand, releasing the first and those to follow has become comparable to killing and weighing the fish, and is recognized appropriately by most clubs. Even the Tuna Club of Avalon recently relented and now the tagging and releasing of two striped marlin can replace the taking of a marlin to qualify for a voting membership if the angler chooses.

Denholm has resisted releasing-only, insisting that tagging might possibly lead to some useful scientific data if the release was ultimately recovered. Throughout his sportfishing career, Denholm has been an ardent supporter of organizations working to protect the oceans’ resources. Anchovy quotas, drift gillnets, white seabass and many other battles over the years have benefited from his personal and financial support.

David has earned his place, not only in the Brotherhood but also in the history of Southern California Sportfishing. He has been named Top Angler of the Year by the Tuna Club six times, and has been the recipient of the coveted Light Tackle Recognition Award 13 times. Jerry’s dad, Roy Garrett, purchased a boat, the family’s first, Jeramar, in 1946. In those days, their trips were restricted to the 14-Mile Bank where they caught albacore on feather jigs. The small private boats didn’t have live bait systems, so when fishing Long Point for white sea bass and calicos they used frozen or cut bait. It worked great for the large numbers of fish around in late spring and early summer of the late 1940s.

Jerry’s father became a member of the Tuna Club in 1952. That same year Jerry joined the Balboa Angling Club and he has remained a member more than a half a century. Over the years he has been awarded 61 buttons and awards. Jerry had also began making regular fishing trips with Bill Poole on the original Polaris, considered to be one of the hottest boats fishing the Coronado Islands for yellowtail. He used a new-fangled gadget, a Centaur spinning reel. Hands-down he could outcast everyone with this reel, but its felt drag washers needed to be changed after every third or fourth ‘tail.

Jerry joined the Marlin Club in 1955 and caught a marlin on 9-thread linen. Fishing the waters off Point Loma, he caught striped marlin, tuna and broadbill and was awarded 13 Marlin Club Buttons during his years as a member. Jerry’s emersion in sportfishing was complete and over the next half century he logged more than 2,000 days on the water, mostly off the coast of Southern California. Occasionally, he ventured farther. One memorable trip to Cabo San Lucas in 1969 was on a 37-foot Post equipped with only a 25-watt AM radio! In addition, he has fished on many long-range trips out of San Diego as well as on the waters surrounding Hawaii, Australia and New Zealand.

His Linen Line Knot Guide is a must for anglers attempting to fish with 1940 or earlier tackle. Jerry’s conservation causes, including Ocean Fish Protective Association, The National Coalition for Marine Conservation-Pacific Region, IFGA, as well as the Tuna Club Foundation, have enjoyed his tireless efforts on their behalf. Jerry Garrett’s fishing accomplishments span a lifetime and many are recorded in dusty books in various clubs’ archives. Nevertheless, his passion for his beloved sport has not diminished over the years.

At age 66, he hooked a swordfish on 80-pound in the rough seas off of New Zealand. Fourteen-plus hours later, he landed the 813-pound 7-ounce fish which set a new 80-pound IGFA World Record (at the time). It was his 15th swordfish caught in his incredible sportfishing career! The New Zealand broadbill population has been subject to heavier long line pressure and the count for the last few seasons has been just a fraction of the prior decade. The size of the landed fish has seen a big drop with this year’s Bay of Islands Swordfish Club trophy winner being fellow Tuna Club member and friend, Jack Rainwater with a 334-pounder.

Yellowtail fishing continues steady and I have been fishing lighter line as the average 40+ pound fish on 8- and 12-pounds is a big challenge. These bigger fish make the rocks quickly, so the boatman must get between the fish and rocks as the bait is being taken.

Denholm, too, has not lost his passion for swordfish and follows very closely any activity that suggests a fin might be on the horizon. Hearing the news, you’ll find him hopping on a plane from Colorado, hitching a ride on a friend’s boat to once again dust off the Zeiss binoculars and yell, “I got one!” Thus far, his swordfish stats culminated with a 452.5-pound fish caught in September 2003, becoming the recorded California State Record. [Larger fish were caught 30- to 40-years ago, but California Fish & Wildlife did not record the event.] More recently, Denholm has directed his energy to skiing 100+ days a year and has taken up surfing to get his water fix! In a recent note Denholm bragged, “The Brotherhood is intact and stronger than ever. I recently skied with Ralph and fished with George Garrett (Jerry’s son) in the Master Angling Billfish Tournament in Southern California. Jerry, Ralph and I are in touch practically on a weekly basis! Fish stories abound … the Brotherhood lives on!” Ralph Clock Ralph Clock e-mailed recently: “My wife Nazira and I visited her family and friends in the northeast of Brazil in October, 2012. “A good friend had introduced me to Paulo Rocha who has a 22-foot trailerable bass boat and since there was too much wind for me to be able to arrange an offshore fishing trip for wahoo or tuna, Paulo invited me to join him for a day of fishing for peacock bass on Lake Castelhana. This is 1,500 miles north of Rio, up near the equator (4 degrees south latitude to be exact). Peacock bass are furious fighters … they run like an 8-pound bonito and jump like small salmon and I was using a 10-pound bass casting outfit. We were wading in waist-deep, 90-degree water. “As you can see, we were wearing hats and sunglasses to give some protection from the intense tropical sun. What a trip! The peacock bass were definitely worth trading my offshore trip! There is always a new challenge out there …“ “More recently, my son David and I fished with fellow Tuna Club Member Bob Hoose aboard his boat, Prospector and caught YFT. Our ‘Annual First Weekend of August’ trip is on our calendar each year.” “And Dave, Jerry and I keep in touch.

There is something about our friendship that has weathered the changes of time; it’s always a pleasure to share our latest exploits with each other.”

Enduring friendships born from a shared obsession discovered in their childhood such as these men enjoy are to be cherished; it is a unique rarity in a society that moves as quickly as ours and expects instant gratification. Each man has achieved excellence in a sport that insists on near perfection tempered with a little luck in order to earn the title of “Living Legends” by their peers.