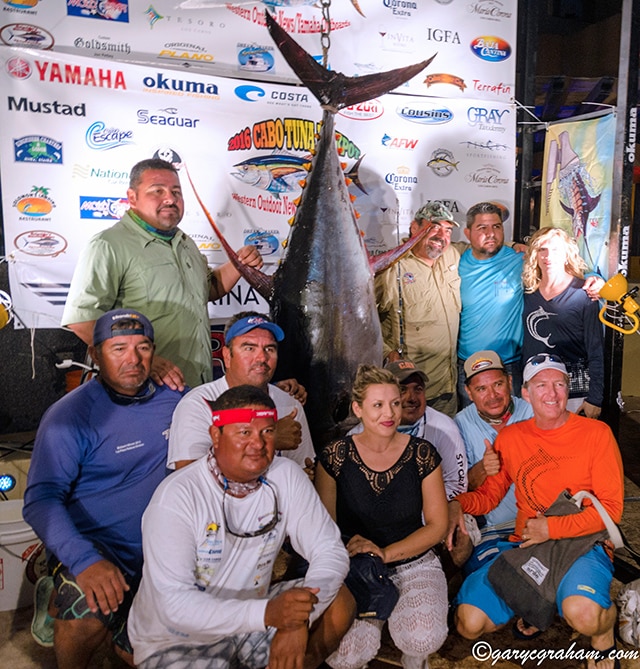 It’s the largest tuna tournament in the world – Cabo’s 18th Annual Western Outdoor News Yamaha Los Cabos Tuna Jackpot – held in early November in what has become known as a “field of dreams.”

How large? This year, 168 teams from around the world competed in sportfishing boats of every size imaginable that swayed and rocked in front of the Los Cabos Tesoro Hotel on the Malecón. 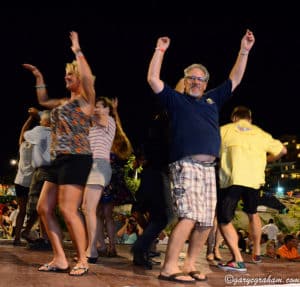 Although there are many money events in Cabo, none seem to draw the high number of teams this one does. The unusual rate of return can be attributed to the “fun” quotient of “fish hard … party harder” motto which the organizers adopted years ago.

Prior to the registration, staff and sponsors arrived to join tournament director Pat McDonell and assistant Mike Packard, his wife Karla, daughter Kai and son Keone, to begin final preparations.

Yellowfin tuna info was hard to come by, even though both local and visiting anglers had been pre-fishing. Anglers had become tight-lipped and reluctant to share their findings as the first day of fishing drew near. Had one of the best recorded tuna bites dried up or was it the usual pre-tournament silence? There were debates each night centering on where the big one might be found; would it be caught chunking on the Gordo or flying a kite among the porpoise offshore? 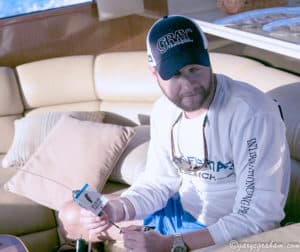 The mission? To deploy two satellite tags on striped-marlin. Boarding the newest addition to 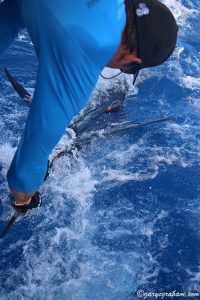 the Pisces 25-boat armada, the “TAG Team,” a 61-foot Viking, we headed out around Land’s End and north 52 miles to the Finger Bank where striped marlin were plentiful.

With the help of the crew, by 1 p.m. our mission was accomplished; both tags were deployed in healthy striped marlin.

Later that evening, on the balcony above the Pisces Sportfishing Office, the staff, sponsors and special local guests were treated to a welcoming party catered by Captain Tony’s restaurant.

Long before the scheduled opening of registration on Wed., a line had formed stretching around the building and down the malecón. Friendly taunts flew across the courtyard as fellow teammates greeted each other. Excitedly, conversations compared everything from fish-dope to which team had the niftiest team shirts. 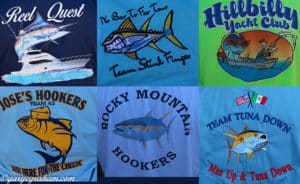 There was even friendly banter about the team names, which ranged from ridiculous to risqué. 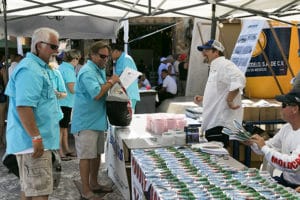 Each team member would visit with sponsors who answered questions about their respective products and after viewing tables laden with giveaways and products, team members received gift packs to fill their custom WON bags — after which, teams were able to have their photos taken with Sponsors’ Baja Cantina girls.
The party atmosphere became contagious as more and more teams arrived.

McDonell discussed the products given to the teams by the sponsors, announcing that all proceeds from the T-shirts and Costa sales would be donated to this year’s designated charity, “Smiles International,” the medical personnel coming to the aid of Cabo children.

It was nearly 7 p.m. before sign-ups were completed and teams found their way to the Cultural Center Outdoor Amphitheater for the Yo-Zuri Welcome Party and Captains’ Meeting where each team member was offered a shot of tequila provided by Brian Solomon, of Solomon’s Landing and a Frogg Togg cooling chilly pad to add to their swag bag. 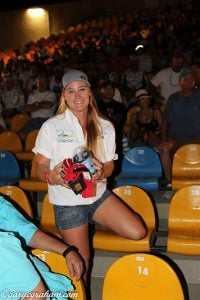 After finding their seats, McDonell welcomed everyone and offered good luck wishes before opening the raffle. Fifteen teams came away with more swag for their bags, including Costa sunglasses, Cousin Rods, Mold Craft lures, Yo-Zuri products and Seaguar line.
Then, assisted by Tracy Ehrenberg, the rules were reviewed in both English and Spanish. Questions were fielded from the audience – the most notable being, “Do I have to be sober when I weigh-in?”
McDonell wisely deferred to the group who cheered loudly in favor!
Ray Gardener, representing Yo-Zuri, announced an additional $500 gift certificate in Yo-Zuri products had been added each day for the largest fish, allowing winners to choose the lures and product they preferred. 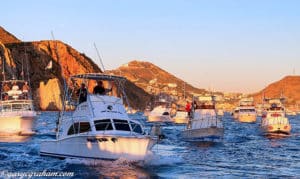 The next morning, the crowded official start boat, Cabo Escape, slowly made its way toward the east and the gleaming sunrise as the 168 tournament boats swarmed around showing their team numbers so staff and volunteers could check off the assigned numbers.

Some teams, warming up for Friday’s popular “Show me your Costa’s” contest – hooted and hollered as they passed by adding to the fun and excitement! 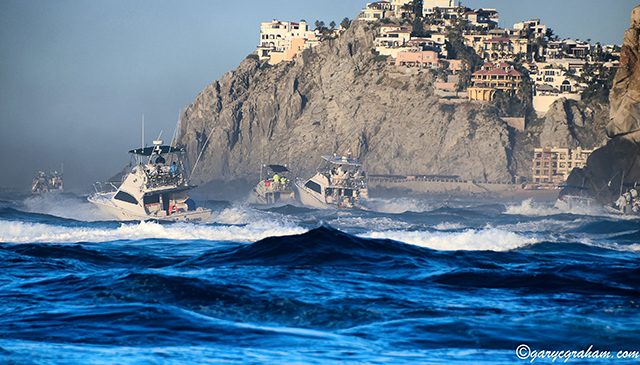 Huge sportfishers dwarfed pangas and smaller boats as they mingled and jockeyed through the crowded line in anticipation.
Finally, 7 a.m. arrived and the flare streaked across the sky, signaling the official start and boats thundered past the Cabo Escape.
…
When the weigh station crew opened the scales at 3 p.m., Team 146, o Land’s End, was waiting to weigh in Antonio Romero’s 35.5-pound wahoo, the first qualifier in the gamefish optional – the beginning of a procession to the scale of potential winners.El Torit 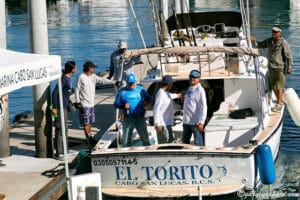 Over the next three hours, a record number of dorado, tuna and wahoo were brought to the scales in rapid succession. 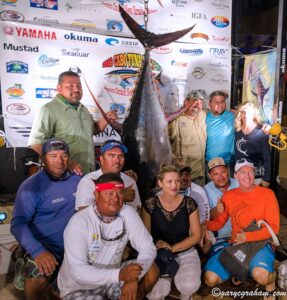 Chucky Van Wormer, aboard Tu Corazon, caught a 298-pound tuna, the second to the last fish weighed in and one of the larger fish ever weighed in during the 18-year history of the event. This fish upended the day’s final outcome.

The gamefish optional leader changed several time during the afternoon with the final leader being Team Luxembourg, cashing in for $60,400 for their 53.2-pound wahoo.
Later that evening, McDonell observed, “That was one of most incredible final hours I have ever witnessed in the event’s 18-year-history!” He added, “It doesn’t take a big boat to catch a big fish; a high percentage of the fish taken today were either on charter boats or pangas . . . not private sportfishers.” 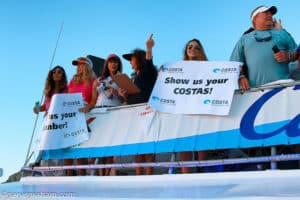 As it became daylight on Friday, all 168 WON Los Cabos Tuna Jackpot teams passed the Cabo Escape as staff and volunteers checked off their numbers with many competing in the Show Us Your Costas! Bultheis picked the most creative winning team to receive four pairs of sunglasses, to be awarded at the Friday Fiesta cocktail party at Maria Corona’s.

Displays ranged from signs to costumes to get Dave’s attention. He must have had a sore neck as he turned one way and another to check out the many contestants’ efforts. 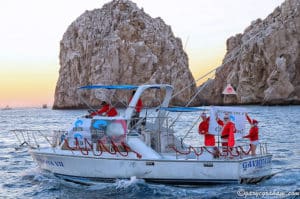 Time passed quickly and an attendee’s name was drawn to fire the flare gun for the final day’s start. The roar of the fleet throttling up on plane was deafening as they sped off — either around the tip and up into the Pacific or north up into the Sea of Cortez — leaving wakes that rolled the Cabo Escape from side-to-side to the delight of the party goers. 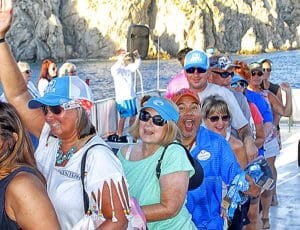 Dancing, conga lines, raffles of Costa sunglasses along with Costa t-shirts and hats were all part of the fun as the Cabo Escape slowly cruised near the world-famous Cabo Arches. Everyone celebrated as one crew member was having a birthday and the Cardenas’ couple, traveling from Venezuela, celebrated their 38th anniversary.

As Cabo Escape docked, Bultheis thanked the 170 passengers, announcing that trip had raised more than $3,000 for the SmilesInternationalFoundation.org which conducts surgical clinics in Cabo by volunteer U.S. doctors and nurses performing numerous operations to correct facial deformities in children whose families live at poverty level.

Shortly after opening the scale on Friday afternoon, angler Mike Velasquez of Team 147 led with a 203.4-pound yellowfin tuna. McDonell noted, “That fish will be tough to beat!”
However as the afternoon passed, weights in both tuna and gamefish continued to climb higher and higher as a total of 16 fish were brought to the scales before closing at 6 p.m.
Jamie Rendon of Team 133, with his 52-pound wahoo, snatched the heaviest gamefish for Day Two. 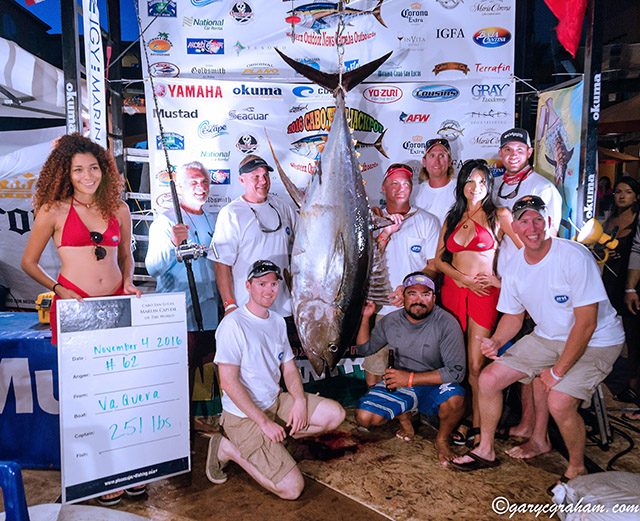 When the scales finally closed, Team 62, first-time participant, Robert Jones had topped the tuna category with a 251-pound monster aboard the Vaquera.
Although there was still a lineup of boats in the inner harbor with fish waiting to be weighed long before the 6 p.m. scale closing, as they reached the scale, none changed the outcome of the day . . . until Reel Quest brought in their four large tuna. 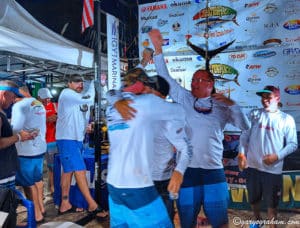 Brad Stevenson had landed the largest of the four tuna and as his fish was hoisted his team stood motionless, all eyes glued to the scale. Weigh Master Mike Packard waited for the numbers on the scale to settle. “Two … hundred … seventy … four … pounds,” he declared! The team members erupted in celebration.

This secured not only the largest fish of Day Two, but also the largest payout in the tournament’s 18-year history!

Later that afternoon, nearly 400 team members arrived at the Fiesta held at Maria Corona Patio Restaurant near the IGY Marina.
McDonell came directly from the Weigh Station which, according to him was an unbelievable scene!
The Reel Q 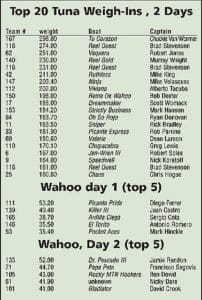 uest alone had won all of the daily optionals for Friday plus the $10,000 optional for Thursday and took Second Place overall for a grand total of $331,950. “They came to play and win, sitting at the big boys table. Before they arrived, we had a string of big fish and we thought that was huge!”
McDonell went on to acknowledge Picante Pride which won the Gamefish Pot of $60,400 on Day One with a 53.2-pound wahoo and Jamie Rendon on Dr. Pescado 2, with his 52-pound wahoo on Day Two winning the same amount. He added that 70% of the boats participating are local charter boats and 80% of the big fish caught were on those local boats.
“The top captains in the world are the Mexican pangeros!” he declared.
The awards banquet was held on the massive Cruise Ship Pier in the Cabo San Lucas IGY Marina where more than 750 anglers, friends, family and dignitaries gathered to celebrate what McDonell described as “an exceptional experience with the final two days of weigh-ins being epic!
With 168 teams, 25 more than last year, the event broke its own attendance record and offered the highest payout ever, $747,500.”

Next was the Live Auction for the “What happens in Florida stays in Florida special trip” conducted by all attending sponsors with all proceeds going to Smiles International. That combined with all of the events fundraising efforts raised $43,000.
• COSTA—Airfare to Orlando, Factory Tour, Mosquito Lagoon Trip, Free Sunglasses for Each, hotel & dinner
• WON—Free Entry in next year’s event
• MUSTAD — Mustad Boat Bag for each, Mustad Shirts for each and $500 in Hooks
• MOLDCRAFT — $500 prize pack each
• GRAY’S TAXIDERMY—Free mount each participant & Sword fishing trip, hotel & dinner
• OKUMA— 4 Makaira Reels and Rods to match
• SEAGUAR—fluorocarbon pack
• PISCES — two day credit on charter
• REEL QUEST — A one-day charter on the Reel Quest 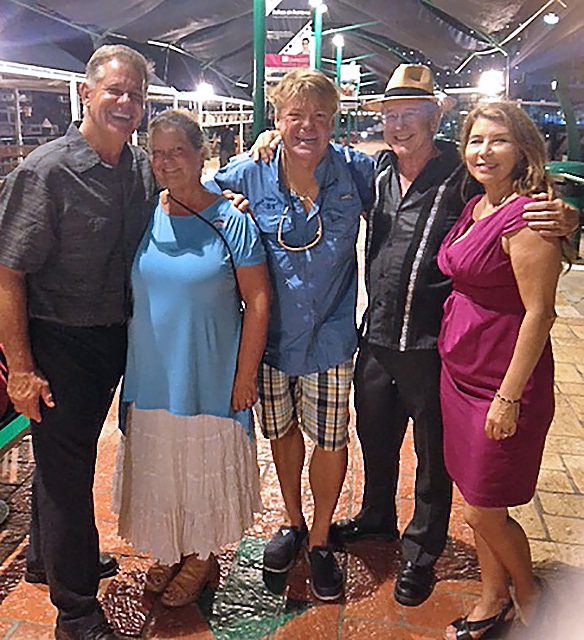 Stew and Melinda Webber winners of the Live Auction for the “What happens in Florida stays in Florida special trip” after the dinner, with tourney director Pat McDonell, and Smiles founders Maribel and Dr. Jeffrey Moses.
First Place and the Championship went to Team America consisting of David Macklis, Angelica Cota and Juan Collins, all from Los Barriles, BCS; and Chucky Van Wormer, son of the late Bob Van Wormer, Baja pioneer and founder of Van Wormer Resorts in Los Barriles. 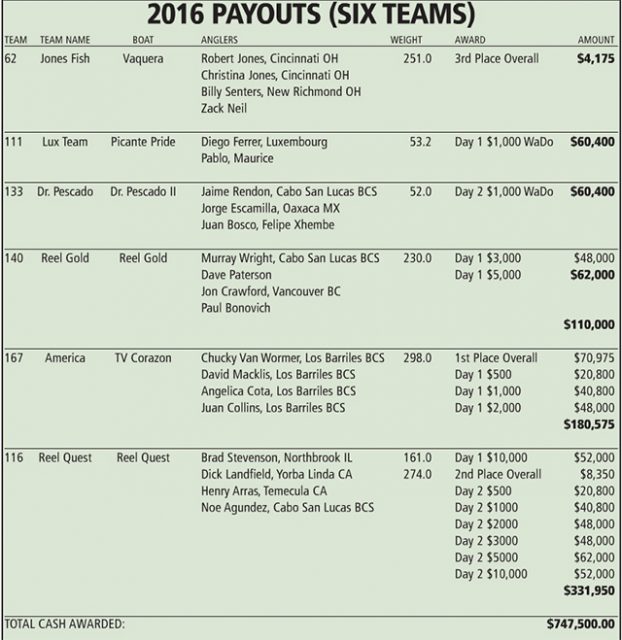