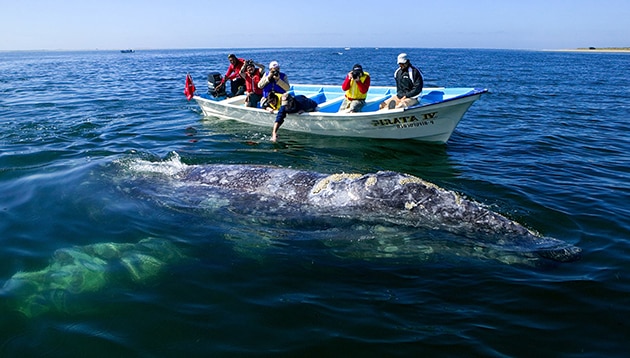 In December 1857, Charles Scammon, aboard his schooner/tender Marin, immortalized his trip into the lagoons and bays of Laguna Ojo de Liebre (Scammons Lagoon Whale Watching), Baja Sur, Mexico (formerly known as Scammons Lagoon) crying thar she blows when he found the whales he searched for. It was the phrase used by Herman Melville in his classic novel Moby Dick.

This was the prelude to the slaughter of these majestic, gentle giants that nearly led to their extinction.

Now, echoing across 164 years, that same phrase is uttered in excitement and awe. Thar she blows can still be heard as a whale mother and calf are spotted in the distance at Laguna Ojo de Liebre and San Ignacio Lagoon as well as in Magdalena Bay. Delighted locals and tourists – aboard inflatable boats, kayaks, pangas, cruisers or from shore; but today are armed with cameras and binoculars instead of harpoons as they hope for a glimpse of behemoth cetaceans in the wild.

In 1993, the International Whaling Commission assessed whale-watching activities, adopting a resolution in 1996 that set up general guidelines, which complied with whale watching regulations around the world. It permitted viewing the creatures to remain a recreational activity while ensuring their safety. An appropriate distance from whales was mandated so as not to cause any interruption to their natural habitat with limitations placed on interactions with the mammals. 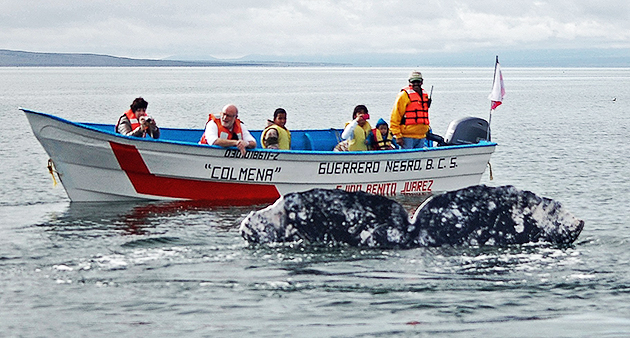 Recreational whale watching throughout the world has since flourished, thrilling millions while becoming an annual billion-dollar tourism industry with an army of employees. 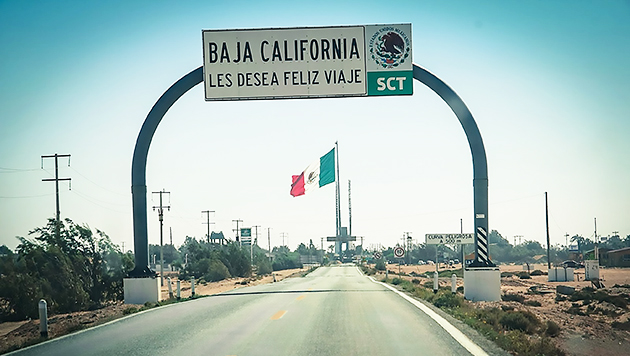 The gray whale migrates down the west coast of California and Baja from early December to January, returning northward March through April. Traveling on a set course, swimming night and day, they average 120 to 160 miles daily, traveling 5,000 miles between feeding and breeding grounds yearly, the longest known mammal migration in the world. They are named for the gray patches with white mottling on their dark skin. Reaching a length of about 52 feet and a weight of 36 tons, their life span is 50 to 60 years. 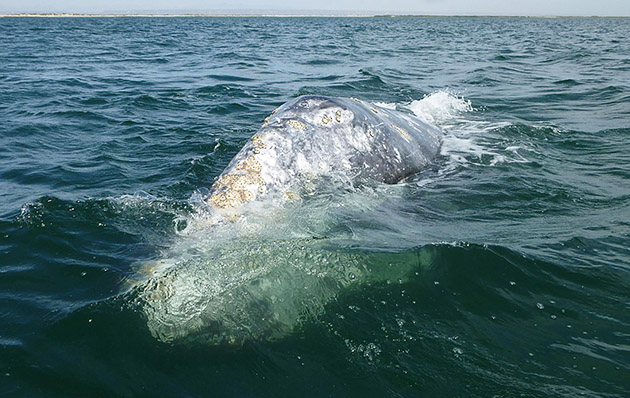 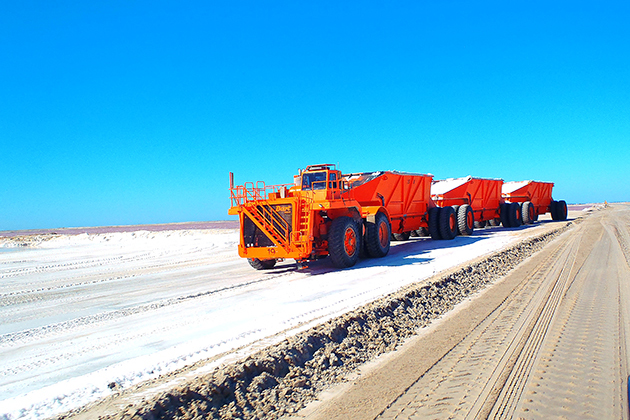 Services and accommodations vary dramatically from location to location. Guerrero Negro, 459 miles below the border, is the gateway to Ojo de Liebre Lagoon (formerly Scammon’s Lagoon). It is roughly half the distance to the tip of Baja dividing the state of Baja Norte from the state of Baja Sur. The town offers hotels, motels and an RV park, plus tourist services including banking and use of credit cards. Guerrero Negro also offers a number of whale watching and guided services. The town is home to a huge salt works, said to be the world’s largest salt producer. Tours are available.

Laguna Ojo de Liebre is a little less than 20 miles from town and extends more than 27 miles inland with an average width of 7 miles. Basically, it is a series of intricate, narrow channels separated by shallow sand bars. The rapid current in the channels near the narrow mouth (2.5 miles wide) can reach a speed of up to 5 knots. Here, the first whales begin arriving as early as December 20, and are gone as late as April 10. In mid-February, the lagoon hosts up to 50% of the gray whale calves born each year. The babies are never farther than a few yards from their mothers while in the lagoon.

Over the past four years, 2,000 whales have been counted in the lagoon at one time.

This is the highest density of whales anywhere in the world! Laguna Ojo de Liebre offers a unique and outstanding natural phenomenon that brings incredible opportunities to observe one of the largest animals on the planet as they perform incredible displays of strength and speed, while at the same time showing the unbelievable care and delicate touch with their babies and humans in boats. 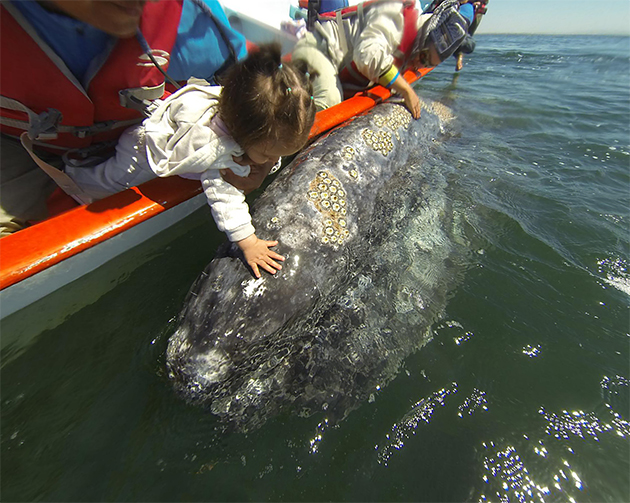 The mothers and calves can be curious about the boats and the people in them.

They often approach to inspect, and sometimes let the people pet their babies. This behavior is puzzling, yet incredible. It is one of the few wild animals that allow humans to get close to their babies. 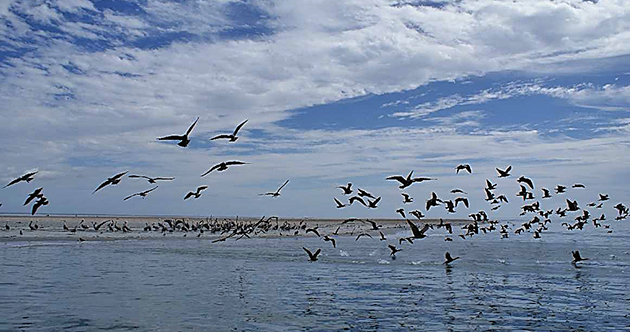 Near the mouth of the lagoon, whales are into their mating and courtship behavior … a spectacular display of strength where males compete to mate with the few receptive females. All of the areas also offer outstanding bird watching opportunities, comparable to San Francisco Bay in the number of birds and species that can be found during the winter months or while on their migrations. Several species of seabirds nest on the inner-islands or on the edges and sand bars. With as many as 200 species registered in the area, most of the birds take advantage of the salt ponds’ abundant food supply of brine shrimp and flies. 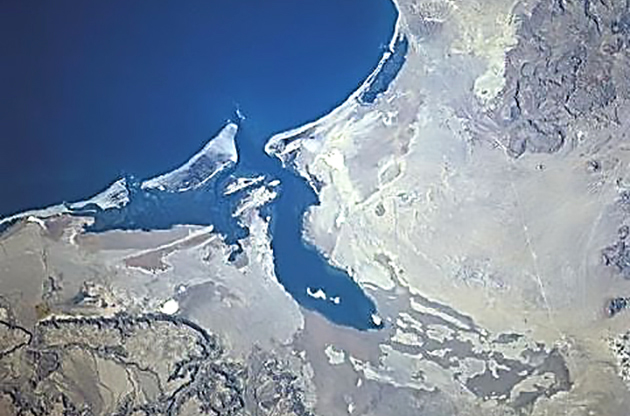 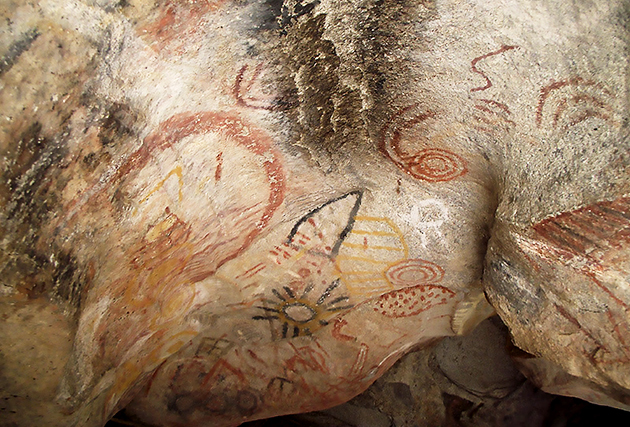 There are also tours available to the outstanding cave paintings in the area. 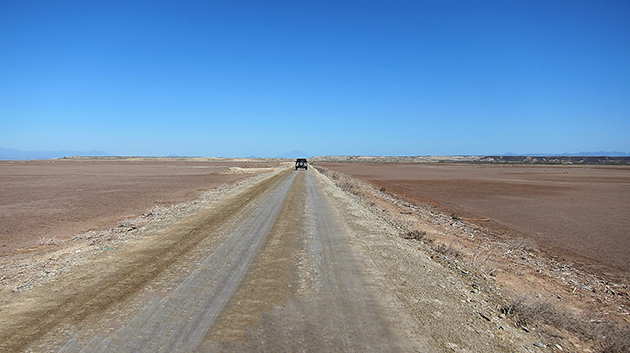 The drive to the lagoon is approximately 45 miles, over a very rough dirt road. There are a few places where you might cross over water; and if it has recently rained, the water in these arroyos might be too high to cross in a standard vehicle. Take your time! Watch out for locals who often drive very fast; and make sure all your equipment is securely tied to roof racks, or in the back of pickup trucks. This drive takes about three hours, depending on the road conditions and your vehicle. 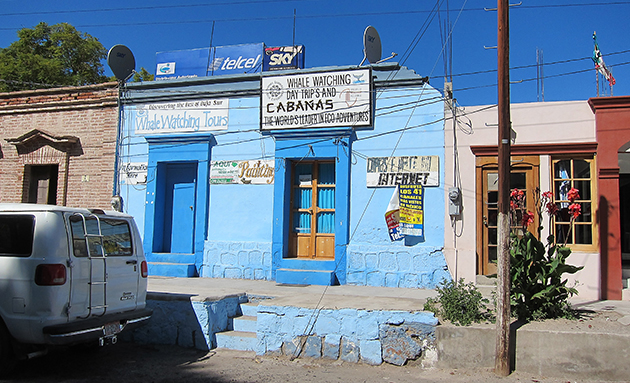 The remote San Ignacio Lagoon considered one of the primary destinations of the gray whale migration, was discovered by whaling Captain Jared Poole, brother-in-law of Captain Charles Melville Scammon.

The first whaling expedition to the lagoon was in 1860, led by Scammon and his six whaling vessels. The treacherous sand bar shoals and narrow shallow water passage into the lagoon discouraged many whaling captains who were not willing to risk the loss of their vessels. However, enough did enter to harvest the Pacific gray whale.

Today, the small local community, numbering less than 100 inhabitants, depends upon fishing and whale watching as their primary sources of income.

The lagoon extends 16 miles into the desert with a maximum width of five miles. Divided into three sections, the upper lagoon is the shallowest and is the birthing area. In the middle lagoon, mothers traveling with their newborns prepare them to join the main body of whales at the lower lagoon; while the lower lagoon is where the majority of cetaceans are found and is where most of the social behavior of the whales takes place. Males and females congregate looking for mates; the newborn calves with their mothers practice traveling the length of the lower lagoon in preparation for the long journey north to their summer feeding grounds in the Arctic. 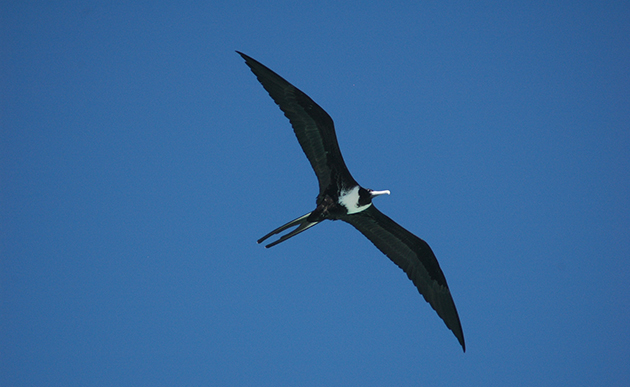 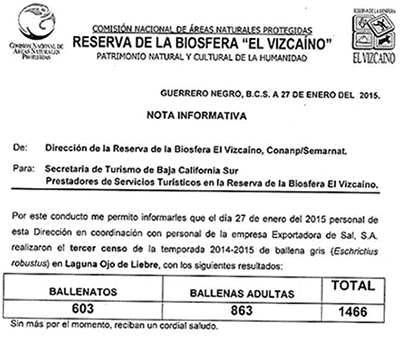 Mexico established the El Vizcaíno Biosphere Reserve, Latin America’s largest wildlife sanctuary, to include San Ignacio Lagoon n 1988. Not only is it now a gray whale sanctuary, but it is also one of only two undeveloped nursery and breeding grounds in the world for the Pacific gray whale. The other is only four hours south in Magdalena Bay.

Magdalena Bay itself stretches 132 miles along the Pacific Coast of Baja. As large as San Francisco Bay, it is home to the mini-towns of Puerto Lopez Mateos and Puerto San Carlos. 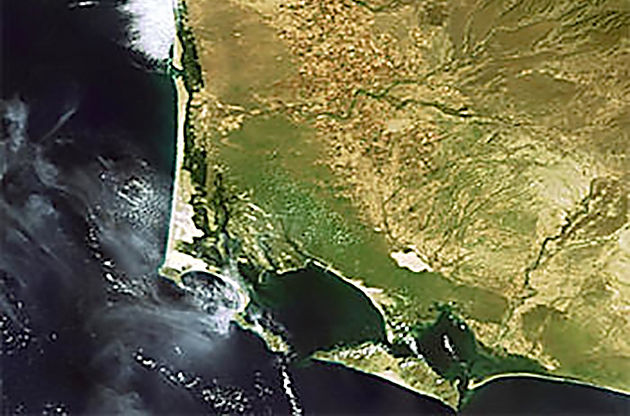 Puerto Lopez Mateos (Magdalena Bay) One of Baja’s best whale-watching sites, where shallow waters provide an excellent place to see whale acrobatics, the Pacific pueblo of Lopez Mateos is located 36 miles northwest of Ciudad Constitución, in the heartland of the agricultural region of what is known as the valle or valley. This remote village in the Comondu region of central Baja is a favorite of whale watchers shielded by one of the offshore barrier islands, Isla de Magdalena.

During the season, busses and airplanes arrive daily filled with visitors from La Paz and Los Cabos to whale watch and take advantage of the camping trips and kayaking. A permanent stage as well as a pier to facilitate the loading of passengers has been constructed.

While the whales are in residence, the narrow waterway that passes by town becomes a veritable whale (ballena) cruising strip. Panga (skiff) excursions in Puerto López Mateos are easy to arrange and very reasonably priced. Overnight accommodations include a few small hotels and RV overnight parking; some locals offer rooms to rent. There are popular taco stands and several restaurants that offer family-style Mexican dishes. 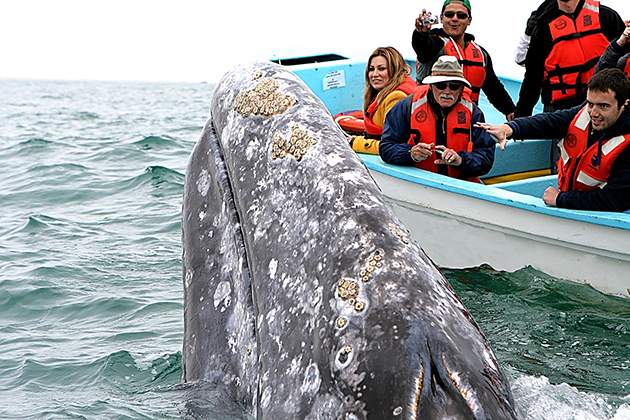 During the annual gray whale migration from January through March, the canals, bays and bocas of the Bahia Magdalena surrounding Puerto San Carlos – the only deepwater port in the Baja complex – are crowded with birthing or breeding whales and their young. Located 35 miles west of the city of Ciudad Constitución, San Carlos celebrates the gray whales every year. Stands offering whale-watching tours greet visitors as they enter town. Punta Entrada, at the southern tip of Isla Magdalena, which forms the north end of the wide channel between Bahia Magdalena and the Pacific, is one of the best viewing spots. Accessible only by boat – the best anchorage is on the southeast side of the point – or by small plane – a landing strip lies just north of Punta Entrada. For the adventurers, camping at the fish camp near the tip or farther north near the village of Puerto Magdalena is an option. A San Carlos pangero can drop campers off on the island and return for them the following day. 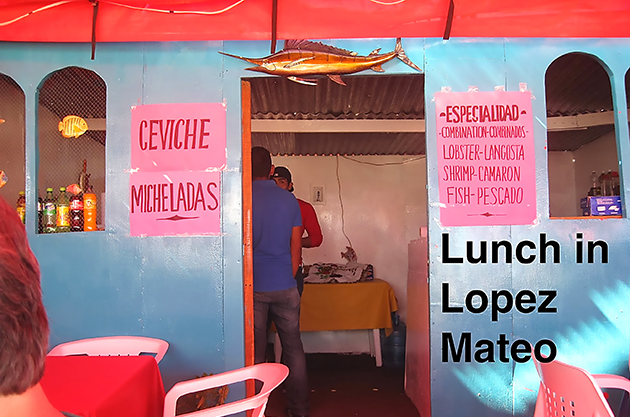 The town has several hotels and motels as well as a reasonable selection of restaurants offering Mexican dishes and freshly caught seafood, literally delivered from the boat to the table.

Every one of these remote areas offers accommodations, RV parking and camping as well as other services.

The west coast of Baja, stretching from Laguna Ojo de Liebre to Magdalena Bay along the Pacific, celebrates the whale watching spectacle in a unique manner that cannot possibly be duplicated anywhere else in the world. 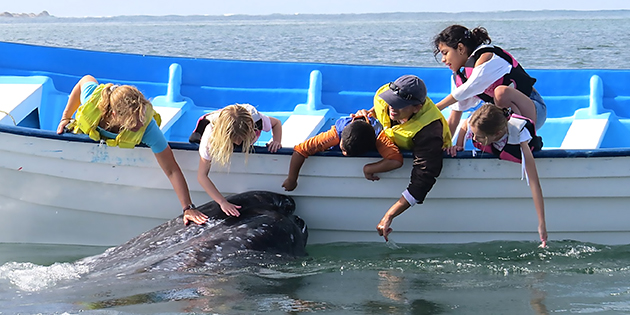 For four months, a little more than a quarter of each year, Baja locals rise to the challenge of being bit players on a stage with a cactus-strewn desert for a background as they present cavorting mammals, whose weight is measured in tons, willing to allow the audience to reach out and touch them.

No wonder visitors flock from around the world to watch a show filled with a cast of characters that would do Cecil B. De Mille proud while they experience their own thar she blows moment.