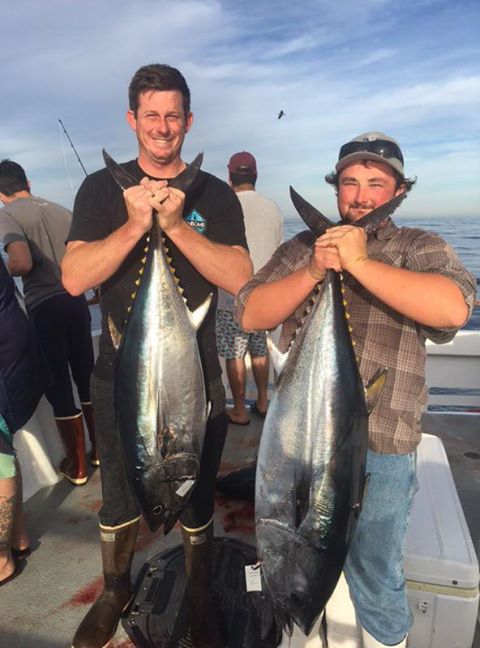 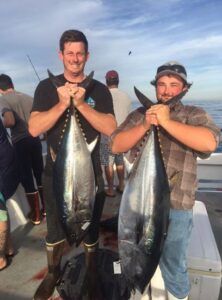 There was a time when tuna in November was some weird El Nino driven anomaly.  That’s no longer the case.  This week provided another bountiful tuna harvest for anglers that got out on the water hunting them.  Even an 805 boat, the Amigo out of Ventura Sportfishing got in on the action this week on a 2 day trip (right).

The only thing slightly different this year from the last few is the presence of some nicer grade yellowfin sprinkled in with the bluefin.

I’m convinced at this point the presence of these fish has nothing to do with El Nino and everything to do with dropping our recreational limit from 5 to 2 fish, and the leverage that provided to get Mexico to drop their commercial take.  Remember when catching 15 lb. bluefin at the tuna pens in Mexico was a thing?  Glad we’re not doing that anymore.  Back then, a 50 lb. fish was a giant.  Now they’re just the “catchable” grade.

Shoutout to Ken Franke and the Sportfishing Association of California for leading that charge.

Enough historical perspective, where do we go from here?  I think we’ll continue to see these fish get caught in the near term.  Next week we’re supposed to get the first big blow of the season.  Boats may not go out for awhile.  We may lose where these fish are for a bit and the counts will drop off.  Interest will wane.  Some boats will go offline to do their annual boat work and it will become much harder to get on these fish.  Go now if you if you still have a tuna itch that needs scratching.

What Else Is Going On? 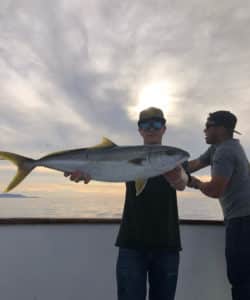 Pretty mixed bag on the local scene…some bonito and bass still getting caught, but more time being spent rockfishing.  You still want to bring your yellowtail gear though as there may be a window of opportunity.  You’ll want to be prepared if that happens as Native Sun crewmember, Nick Hawkins (left), was yesterday.  Nick told me they came across the fish and dumped their bait tank to give them a shot.  He flylined a mack on 40 to get this one to go.  Good job Nick!

Similar scenario at the islands, just a better grade of fish.  I decided to use my BOGO ticket on the Eldorado and will head out tonight to San Nicolas.  Speaking of BOGO (Buy One, Get One), the Eldo has posted their schedule for December.  You will receive a pass for a free overnight trip next year, if you buy an overnight trip December 2nd through the end of the year.  Jump on it as these tickets predictably go fast. 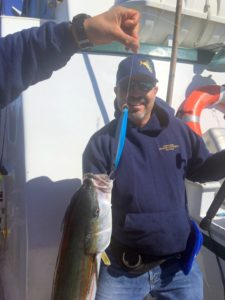 Also, it’s not too early to plan ahead for next year.  Before you know it, 2018 will be over and Colonet will be top of mind for Southern California anglers.  I just confirmed with Capt. Drew Card, owner/operator of the Pacific Queen, yesterday.  The So Cal Salty Colonet trip will depart January 18th for a 1.5 day trip down the Mexican coast in search of yellowtail and rockfish.  That’s reader, Dan Rugg (right) with a nice yoyo yellow on last year’s successful trip.

Passports are required, so get that taken care if you haven’t already.

Good stuff happening on the water.  Good luck if you get out there.