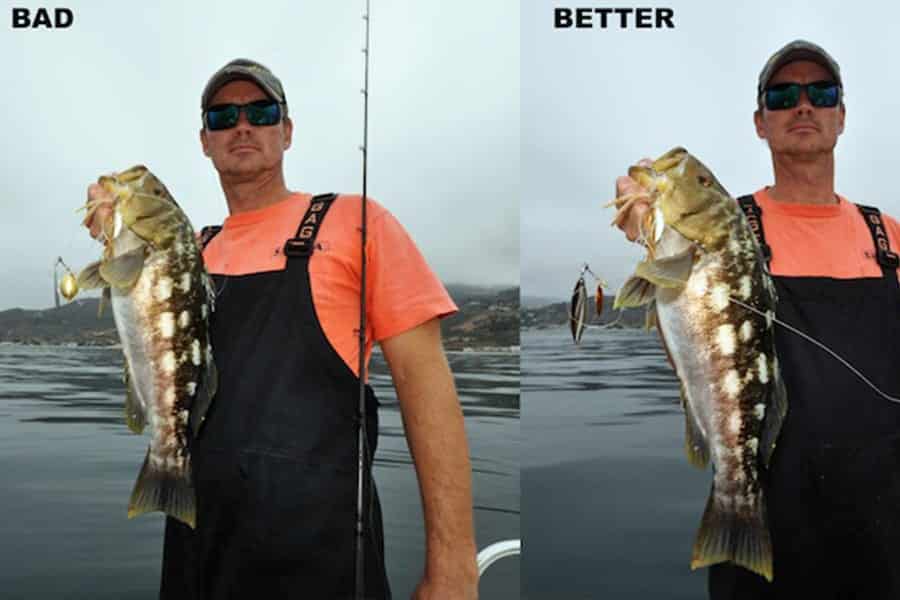 How many times have you had someone show you a photo of a trophy fish and then say, “This picture really doesn’t do the fish any justice…”

It’s all too common. If you take a 5-pound fish and put it in the hand of a 200-pound man and snap a photo of it, the fish is going to look like exactly what it is — something that’s less than one-fortieth the size of the guy holding it. But there are some tricks that you can use to make that fish look bigger, and create a photograph that does, in fact, do the fish justice.

1. BE CONSCIOUS OF YOUR POSTURE On the left side of the photo above, Matt is holding the fish with his right hand but has his left side closer to the camera. His posture causes several problems in this photo. With the fish off-center, your eyes are first drawn towards Matt and you unconsciously use the size of his body as the basis for comparison when judging the size of the bass and it makes the fish look smaller. The other problem is that the fish is not the closest thing to the camera, his left shoulder is, which also detracts from the size of the fish.

On the right side of the photo, Matt has turned his body away from the camera by about 30-degrees while keeping the fish the same distance from his body. This minor posture change not only makes the bass the focal point of the photo but makes Matt look smaller in relation to the bass and by association makes the bass look bigger.

2. WATCH OUT FOR CLUTTER This is a picture of one of the biggest local calicos we caught on our boat this year, but the only thing that it’s got going for it is that it’s a great example of a really bad photograph. Matt and I were in the middle of a fairly hot bite along the Palos Verdes coast when he caught this fish, so rather than stop fishing to take a proper photo, I decided to just pick up the camera and snap a quick shot. I knew better than to do that, but I figured the bass was big enough that it would make up for the lack of camera-work on my end.

Well, as you can see it came out pretty lousy. As I said, the bass is big, but so is the bag of chips, the water bottle, the sunscreen, the fishing line that’s all over the place and the lure that’s hanging directly over Matt’s head.

This one doesn’t need a lot of explanation. If you catch a fish that’s remarkable enough to warrant a photograph, take a minute to pose the fish and fisherman in such a manner as to do the fish the justice it deserves. Some fish, like this spotted bay bass, are going to look small in the photo no matter what you do. But you can still take good photos of them if you are careful when framing your photo.

In the top photo, the camera was too far away from the subject and I ended up with a bunch of distracting features in the photo, like the bench seat, Matt’s right leg and the telephone pole on the shoreline. The combination of these features causes the mind to focus on the overall scene and detracts from the fish. In the second photo, I zoomed in enough to remove the distracting features from the photo and ended up with a more intimate photo that draws the eyes directly to the fish.

4. USE LIGHT (AND THE FLASH) TO YOUR ADVANTAGE Last year I took a trip with Corey Sanden and he asked me to refrain from taking any pictures of the secret spot he’d taken me to (local bass fishermen can be very protective of their secrets). So when he caught this nice calico, I was forced to take the photo with the sun in my face.

The top photo shows the result of my first effort. Along with him being almost invisible due to the lighting, the no-straight arm rule was broken and the photo was way too cluttered with distracting features — like his dog Rio popping his head into the frame.

In the lower photo, I repositioned Corey slightly, asked him to hold the fish closer to his body and banished Rio to the bow of the boat. Then I used my camera’s flash to overpower the effects of the sun at his back.

You don’t need a fancy digital SLR camera to use daylight flash as almost all point-and-shoot cameras offer a flash override function. But my advice is to figure out how it works before you get on the water.

5. GET AWAY FROM THE GRIP AND GRIN Grip-and-grin shots are a good way to tell the story, “I went fishing and this is what I caught…” Action shots say “this is fishing.” Rather than simply reminding me of a calico bass I caught, this photo prompts in me exciting thoughts about big calicos coming up and absolutely devouring my bait as I burn it through the kelp — if that doesn’t do the fish any justice, nothing will.